Fed Hikes Rate by Another 75bps to Curb Inflation 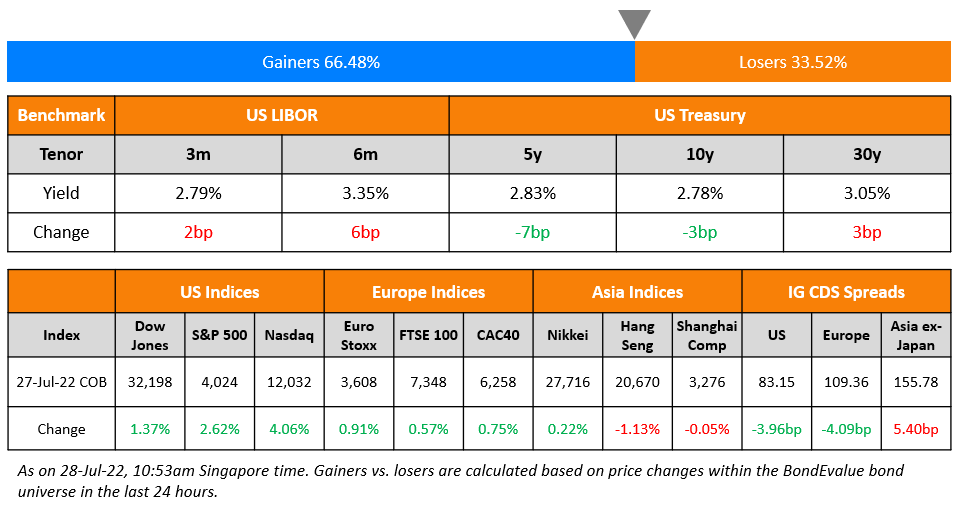 US equity markets posted strong gains post the 75bp hike by the Fed on Wednesday, with the S&P and Nasdaq up 2.6% and 4% respectively. Sectoral gains were led by Communication Services, up 5% and Information Technology up 3.9%. US 10Y Treasury yields eased 3bp to 2.78%. European markets closed in the green too – DAX, CAC and FTSE were up 0.5%, 0.8% and 0.6% respectively. Brazil’s Bovespa was up 1.7%. In the Middle East, UAE’s ADX and Saudi TASI gained 0.3% and 0.7% respectively. Asian markets have opened mixed – STI, Nikkei and Shanghai were up 0.3%, 0.3% and 0.6% respectively while HSI was down 0.5%. US IG CDS spreads narrowed 4bp and US HY spreads were tighter by 23.7bp. EU Main CDS spreads were 4bp tighter and Crossover spreads were tightened by 25bp. Asia ex-Japan IG CDS spreads widened 5.4bp.

The FOMC raised its benchmark rate by 75bp, in line with expectations, to bring the Fed funds target rate to 2.25%-2.50%. The move comes on the back of rising inflation, hitting 40Y highs at 9.1% in June. Fed Chair Jerome Powell said, “While another unusually large increase could be appropriate at our next meeting, that’s a decision that will depend on the data between now and then.” He further added that the Fed will slow the pace of increases at some point and rejected claims of recession, citing a very strong labor market as evidence. FOMC stated that the Committee will continue reducing its holdings of Treasury securities, agency debt and agency mortgage-backed securities (MBS), as per plans to reduce the Fed’s balance sheet. The Committee is strongly committed to returning inflation to its 2% target. In May, the Fed had decided to begin trimming its balance sheet by allowing $30bn of Treasuries and $17.5bn of MBS to roll-off. In August, the cap will increase to $60bn and $35bn for Treasuries and MBS respectively.

Loan loss provisions, also known as provisions for credit losses, are essentially amounts that are required to be set aside by banks against impairments on loans. These ‘impaired’ loans are bucketed into different categories based on how long payments are overdue (for example, sub-standard, doubtful, defaults) and different levels of provisioning are required against these types of loans. Hence, if a bank overprovisions during a certain period and losses turn out to be less than expected, the bank may release some of the provisioning (impairment release or net credit release), helping its income statement whereas an increase in provisioning (impairment charge/addition) may hurt its income statement.

On the FOMC Raising Rates and the State of the Economy

“We understand the hardship high inflation is causing…We are strongly committed to bringing inflation back down, and we are moving expeditiously to do so. We have both the tools we need and the resolve it will take to restore price stability on behalf of American families and businesses…We thought that strong action was warranted at this meeting, and we delivered on that…It is essential that we bring inflation down if we are to have a sustained period of strong labor market conditions that benefit all. The current picture is plain to see: The labor market is extremely tight, and inflation is much too high.”

“I do not think the U.S. is currently in a recession…We do want to see demand running below potential for a sustained period to create slack in the economy…We’re trying to do just the right amount. We’re not trying to have a recession…Restoring price stability is just something we have got to do. There isn’t an option to fail.”

“Risk assets, including Asian credit, could benefit as the fixed-income markets may gain favor again…With the recent spread widening in the Asian credit market, we see value in some of the Indian high-yield issuers in the renewable energy, steel, and telecom sectors. We view these sectors as more resilient to an economic downturn but also have the capacity to pass on price increases. We continue to be cautious on sovereign issuers, particularly in the frontier space.”

“China is less vulnerable to US rate hikes…For China, we see domestic policies as a much more important driving force than the US rates. India is vulnerable to higher US interest rates, which could lead to capital outflow, depress the Indian rupee further, prolong imported inflation and prompt more domestic rate hikes. Southeast Asian markets tend to underperform in the rate-hike cycles.”

On Feds Hiking Rates Much Further Than What Markets Expect

“Financial markets are underestimating just how far the Federal Reserve will go to tame a decades-high inflation rate…The fact that he came back to the June SEP projections three to four times in his remarks suggests to me that the Fed thinks they’re going to do quite a bit more than what’s priced into the markets today…I’d be a bit more skeptical, the terminal rate is probably closer to 4%.”

“The Fed’s guidance that it will likely move more slowly through the rest of the year won’t help bring down price growth…Did the action today raise questions about the Fed’s credibility in fighting inflation?…After this run up we’re getting in the stock market and the bond market right now, by next week we’ll be sitting around and questioning, you know, gee, are they really being credible?…Forward guidance was created in hell…I would blame forward guidance for the market instability that we’ve had over the last six months.”

“This week’s unanimous decision to raise its benchmark lending rate by another 75 basis points means the Fed is no longer “behind” the curve…A mild recession would be the best possible outcome for all financial markets.” 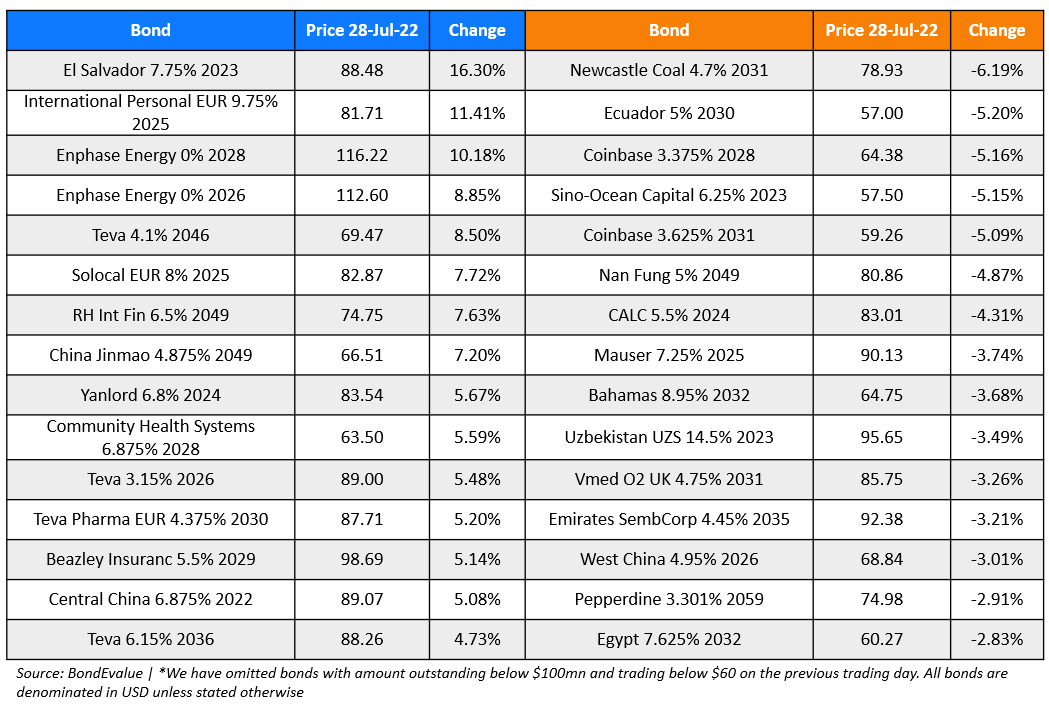