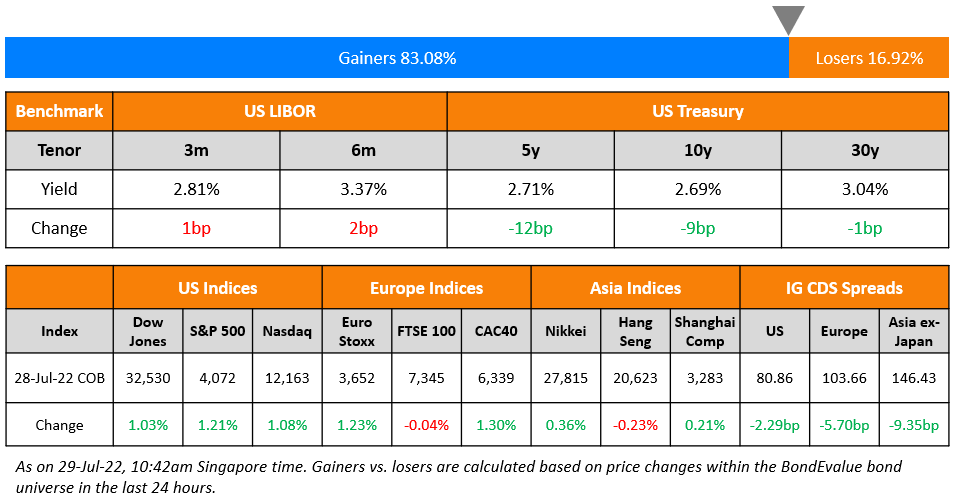 US equity markets continue its upward trend on Thursday with the S&P and Nasdaq up 1.2% and 1.1% respectively. Sectoral gains were led by Real Estate, higher by 3.7% followed by Utilities up 3.5%. US 10Y Treasury yields eased 9bp to 2.69%. European markets were mixed – DAX and CAC were up 0.9% and 1.3% respectively while FTSE ended flat. Brazil’s Bovespa gained 1.1%. In the Middle East, UAE’s ADX fell 0.1%, while Saudi TASI was up 0.9%. Asian markets have opened with a negative bias – STI, HSI and Shanghai were down 0.5%, 2.3% and 0.7% respectively while Nikkei was flat. US IG CDS spreads narrowed 2.3bp and US HY spreads were tighter by 13.3bp. EU Main CDS spreads were 5.7bp tighter and Crossover spreads were tightened by 25bp. Asia ex-Japan IG CDS spreads tightened 9.3bp.

The US GDP fell 0.9% in Q2 vs. expectations of a 0.5% growth. This follows a 1.5% contraction in Q1, putting the US in a recession based on the formal definition of two consecutive quarters of a GDP contraction. Meanwhile, China’s GDP growth slowed to 2.5% in the first half of 2022, indicating high pressure in H2 amid fears of a global recession, uncertainties arising from the Ukraine war and recurring lockdowns. Chinese state media said that China will try hard to achieve the best possible results for the economy this year, dropping mentions of its previous GDP target of 5.5% for 2022.

Posco raised $1bn via a dual-trancher:

The bonds have expected ratings of Baa1/A– (Moody’s/S&P), same as the issuer. Proceeds will be used for refinancing and general corporate purposes.

The senior unsecured green bonds have expected ratings of Baa3/BBB. Proceeds will be allocated exclusively to Clean Transportation Solutions: investments and expenditures for the design, development or manufacture of clean transportation technology and enabling solutions.

Hawkish is a term used for a monetary policy stance where policymakers are concerned about inflation or overheating risks and therefore adopt a tightening stance. A hawkish stance could be either in the form of rate increases, asset purchases decreases or even indications on the same relative to market expectations. This is the opposite of a dovish stance which tries to ease financial conditions. In yesterday’s FOMC, the Fed hiked its benchmark rate by 75bp to bring the Fed funds target rate to 2.25-2.50% in order to combat rising inflation of 9.1%. Analysts expect the Feds to remain hawkish in the medium to long term until inflation levels are brought back to its target rate of about 2%.

“We believe that asset quality is worsening due to Covid-related lockdowns, the property slump, the risks associated with small and micro loans, and the general economic slowdown in China… The capital injections from the government will help those small regional banks with large bad loan burdens to clean up their books and support the local economies.”

“Corporate sentiment and ability to increase capital expenditure are both very weak and so economic momentum is yet to pick up…As long as property woes and Covid linger, bad loans at banks will continue to rise.”

“To restore homebuyers’ confidence, the government needs to improve the risk-reward for them. So allow some property price appreciation. That will send a strong signal to the market…The property sector will still survive, but some privately owned developers may cease to exist in the future.”

On the Idea That Two GDP Drops Spell a Downturn

“It’s extremely unlikely NBER could or would make a recession call anytime soon. As usual, they’ll be late, but that’s by design… Few of the relevant indicators have been consistently negative — but, many are choppy. Barring revisions, it still seems unlikely NBER would date the peak as early as June.”

“A recession is a sustained and broad-based decline in economic activity, across many sectors of the economy. To point to the most obvious contradiction, the economy is still adding jobs at a very good rate. Many industries continue to see robust sales.”

Krishna Srinivasan, director of the IMF Asia and Pacific Department

“Risks that we highlighted in our April forecast — including tightening financial conditions associated with rising central bank interest rates in the United States and commodity prices surging because of the war in Ukraine — are materializing…That in turn is compounding the regional growth spillovers from China’s slowdown…While growth is weakening, Asian inflation pressures are rising, driven by a global surge in food and fuel costs resulting from the war and related sanctions.” 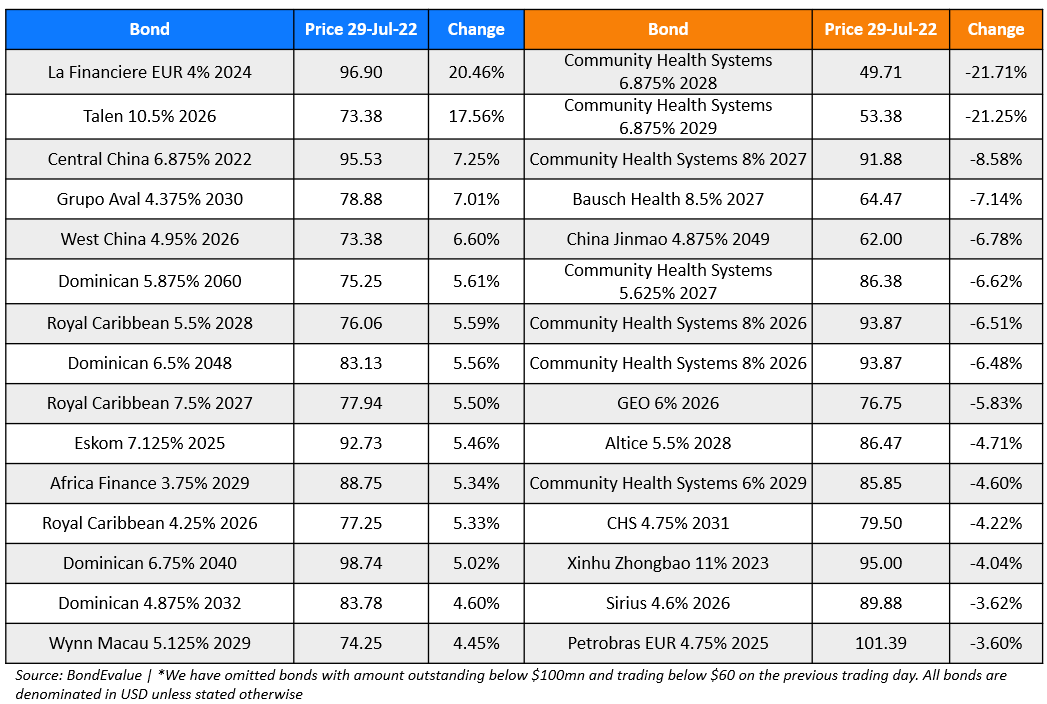