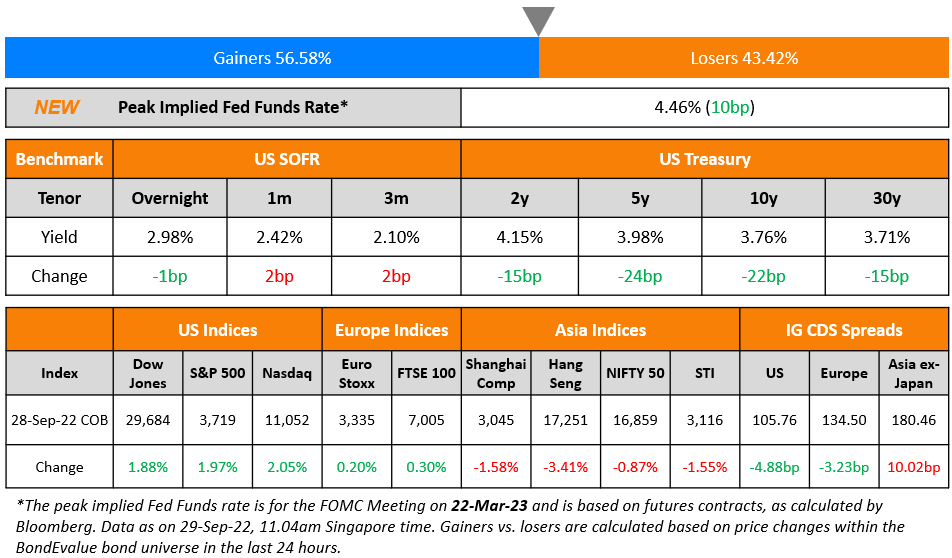 US Treasury yields fell sharply on Wednesday as buy-side flows took over, following the BoE’s announcement on purchases of UK gilts. The US 10Y yield declined 22bp to 3.76% and the 5Y yield dipped 24bp to 3.98%. The peak Fed Funds Rate currently stands at 4.46% for the FOMC’s March 2023 meeting, having eased by 10bp. Subsequently, US credit markets saw a tightening of CDS spreads, with IG narrowing by 4.9bp and HY moving 31.1bp lower. US equity markets ended stronger yesterday with the S&P and Nasdaq up 2% and 2.1% respectively.

European equity markets were broadly positive by ~0.3% and credit markets saw EU Main CDS spreads tighter by 3.2bp and Crossover spreads move 19.6bp lower. Amid the bond market rout, the Bank of England (BoE) announced to buy £65bn ($69bn) of UK long-dated gilts. BoE is set to buy £5bn of gilts per day until October 14 and also postponed its program to sell down its £838bn ($891bn) of government bond holdings which was supposed to start next week, citing potential financial system stability risks. BoE said it was still committed to reduce its QE holdings by £80bn in next 12-months. The UK 30Y gilt yield fell by over 100bp to 3.93% after surging to 5% earlier this week.

Asia ex-Japan CDS spreads widened 10bp and Asian equity markets have opened higher today, ~0.5-1%. As part of its efforts to revive demand in China, the PBoC has set up relending facility worth more than RMB 200bn ($27.6bn) to help manufacturers and others to upgrade their equipment.

Recovery bonds are bonds that are typically issued by state utilities trying to recover losses from natural disasters, such as wildfires or storms. Special fees are levied on customers’ electric bills etc. (to recover losses) and these charges are then combined and sold as notes/ABS. Bloomberg highlights that recovery bonds have seen abundant interest from investors, especially ABS money managers. This is because these bonds offer longer tenors ranging from 10-30 years while typical ABS’s have tenors of just about 5 years. These bonds are also backed by state legislation that allows utilities to impose recovery charges. Analysts say that this makes them a safe haven as compared to other types of ABSs.

Bloomberg notes that a record $17bn of recovery bonds have been sold this year, with the total likely to soon cross $20bn.

“The interest rate has been lowered to 12%. From now on there is no going up, it will fall further. That will also reduce inflation”

“You can see the footprints of the Gilt market all over the US Treasury market in the past week… The signal value from the price action in the US bond market is being significantly degraded by non-domestic factors.”

“I don’t think what we have seen today in the bond market reflects a change in the Fed’s approach. Rate volatility at the moment is clearly being driven by what is going on globally”

On Big Dangers Looming in the Credit Market

“We focus on cash flow, so the biggest risk we are watching is the impact of inflation and potential economic weakness on issuer cash generation”

Lale Topcuoglu Head of credit at Swiss Re AG

“We are starting to see this seep into the leveraged loan market, where defaults are the highest since the depth of Covid”

Per Wehrmann, Head of European high yield at DWS

“We could see a severe recession, particularly in Europe, due to the high energy prices and a potential risk of gas supply issues and gas cuts going forward”

“The combination of additional ratings downgrades and a stream of weaker earnings remain top of mind”.

“Valuations are at historical averages, but risks are above average… High yield has held up reasonably well this year despite significant fund outflows, due in large part to a lack of new-issue supply and significant rising star activity. This has helped to mask very challenging secondary market liquidity, with the cost to exit positions extremely high. “ 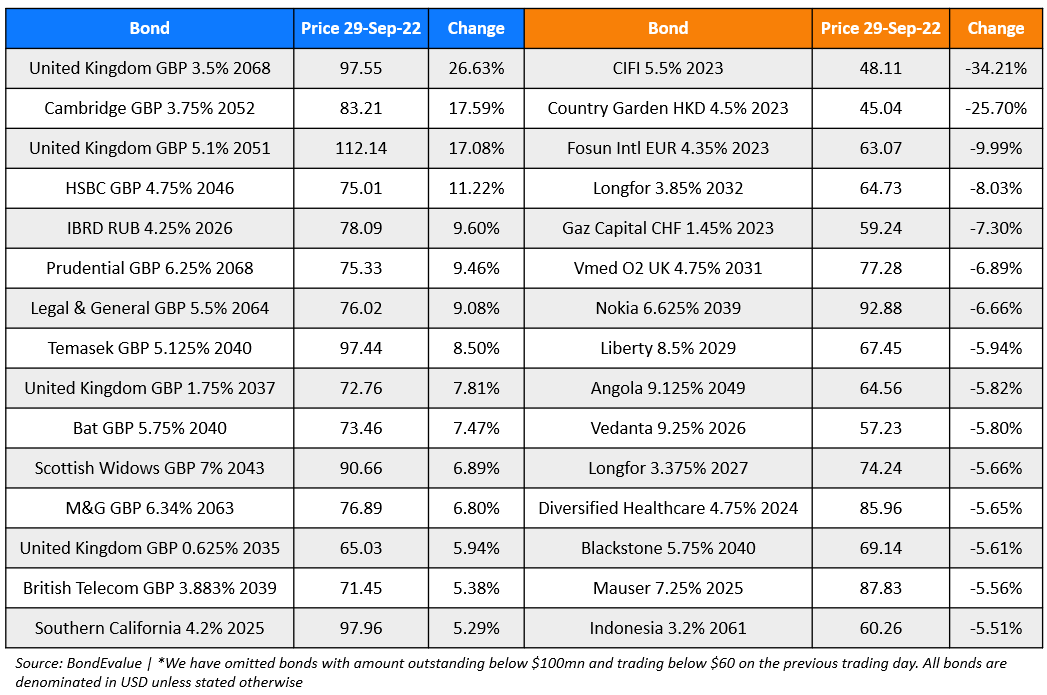