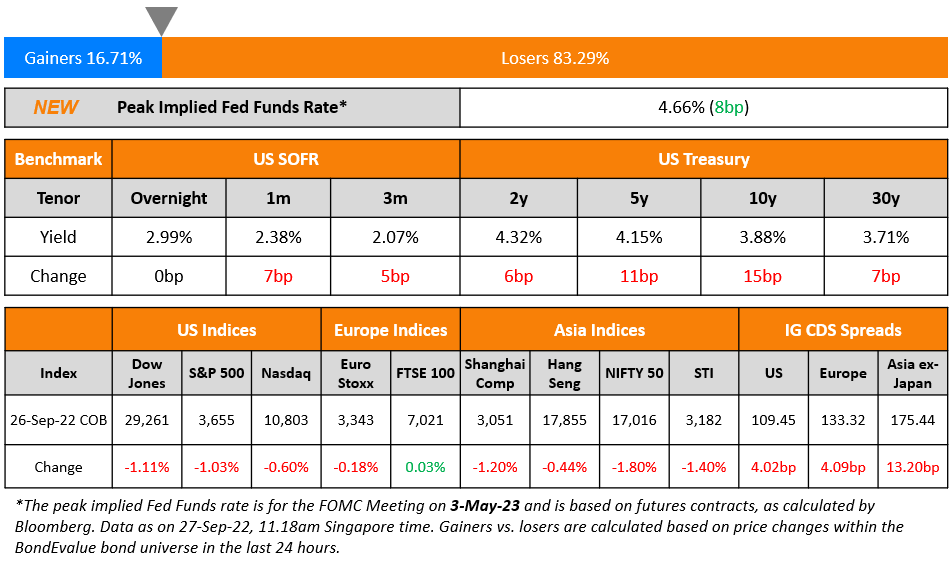 US government bond yields continued to trend higher on Monday with the 10Y Treasury up 15bp to 3.88% and the 2Y up 6bp to 4.32%. The peak Fed Funds Rate currently stands at 4.66% for the FOMC’s May 2023 meeting, having eased by 8bp. US credit markets saw a widening of IG CDS spreads by 4bp with HY spreads also moving higher by 20.3bp. US equity markets began the week on weaker footing with the S&P and Nasdaq down 1% and 0.6% respectively.

European equity markets were broadly weaker too and credit markets saw EU Main CDS spreads rise by 4.1bp and Crossover spreads move 18bp higher. UK’s gilts saw a massive rout with 2Y yields soaring higher by 61bp yesterday to 4.57% and the 10Y yield jumping 41bp to 4.24%. The GBP also crashed to record lows of 1.0382 against the dollar and then retraced towards 1.0783. The sharp sell-off in their bonds and the currency comes after the announcement by the new UK government that it would resort to a sweeping program of tax cuts and investment incentives to boost growth. Post this, the BoE has come out saying that it “will not hesitate to raise interest rates if needed to meet its 2% inflation target, and that it was watching financial markets very closely following sharp moves in asset prices.”

Asia ex-Japan CDS spreads widened 13.2bp and Asian equity markets have opened mixed today. The offshore Chinese yuan fell to its lowest since 29 May 2020 against the dollar with the central bank fixing the yuan at 7.0298 against the dollar, the weakest since July 2020.

Jiangning Jingkai Overseas Investment raised $120mn via a 364-day bond at a yield of 5.35%, 10bp inside initial guidance of 5.45% area. The bonds are unrated. Proceeds will be used for refinancing and general corporate purposes. Nanjing Jiangning Economic and Technological Development Group Corporation Limited has provided a keepwell.

“Markets have got a really good record of testing the authorities”… traders have a tendency “to try to push the political side to breaking point, to see who’s going to blink first”.

“High-yield investors should extend into investment grade as much as their mandates allow. A 5%-7% yield in credits largely agnostic to recessionary outcomes is not often seen.”

“For a 5% yield with very safe underlying company fundamentals, it’s a good place to hold cash in our portfolio until we await better opportunities”

“Dedicated investment-grade managers are staying away from BBBs. That can result in low BBBs getting attractive compared to BBs”

On Buying US Treasuries to Prepare for 2023 Downturn –  Citi Strategist, Steven Wieting

“We have been adding US Treasuries, not because the yield is some incredibly high, beautiful, inflation-adjusted level, but it’s a defensive asset that’s going to work for a period when the economy turns” 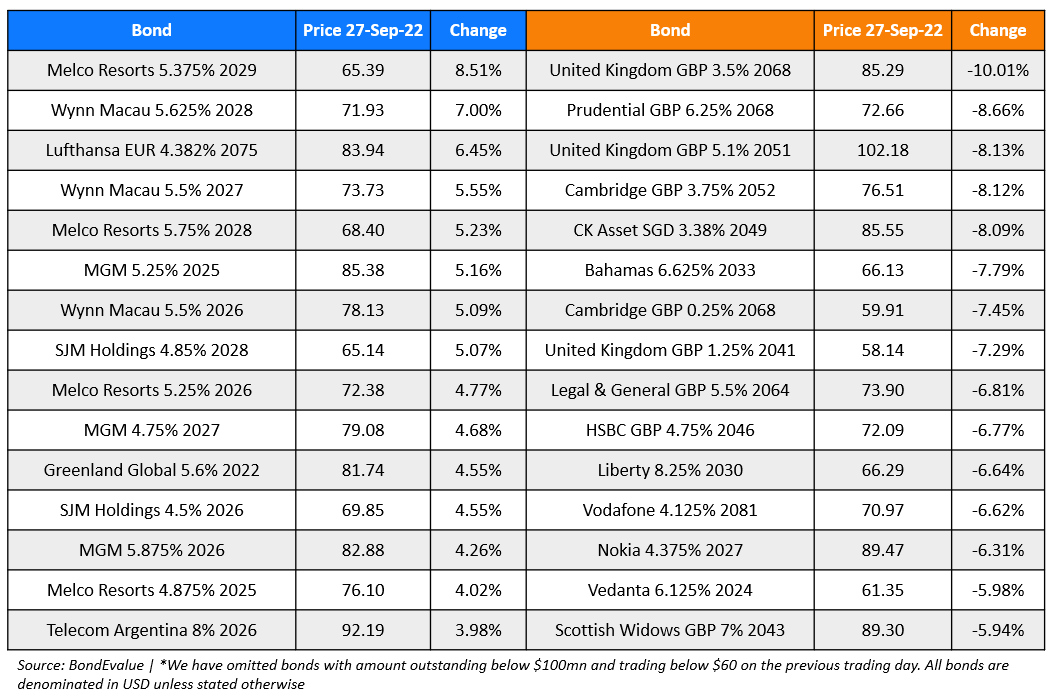