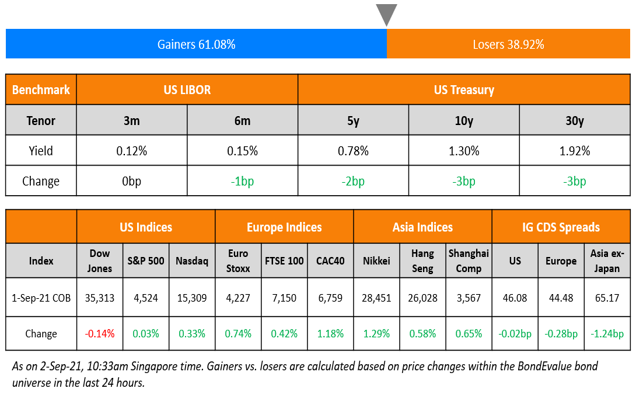 US markets kicked off September with a small gain – Nasdaq gained 0.3% hitting an all time high, while  the S&P was 0.1% higher. Real Estate added another 1.7% while Utilities added 1.3%. Energy and Financials, down 1.5% and 0.6%, were a drag on the markets. European markets were mixed – CAC and FTSE closed 1.2% and 0.4% up while DAX ended 0.1% down. UAE’s ADX and Saudi’s TASI were down 0.5% and 0.1% respectively. Brazil’s Bovespa was also up 0.5%. Asian markets took a cue from the US and opened in the green – HSI, started off with gains of 0.8% before cooling down. Shanghai, up more than 0.5% is leading the Asian markets. HSI and Nikkei are up 0.1-0.2%. Singapore’s STI is down ~0.3% after starting in the green. US 10Y Treasury yields fell 3bp to 1.30%. US IG CDS spreads were broadly stable while HY spread tightened by 1.2bp. EU Main CDS and Crossover CDS spreads tightened by 0.3bp and 2bp respectively. Asia ex-Japan CDS spreads tightened 1.2bp. 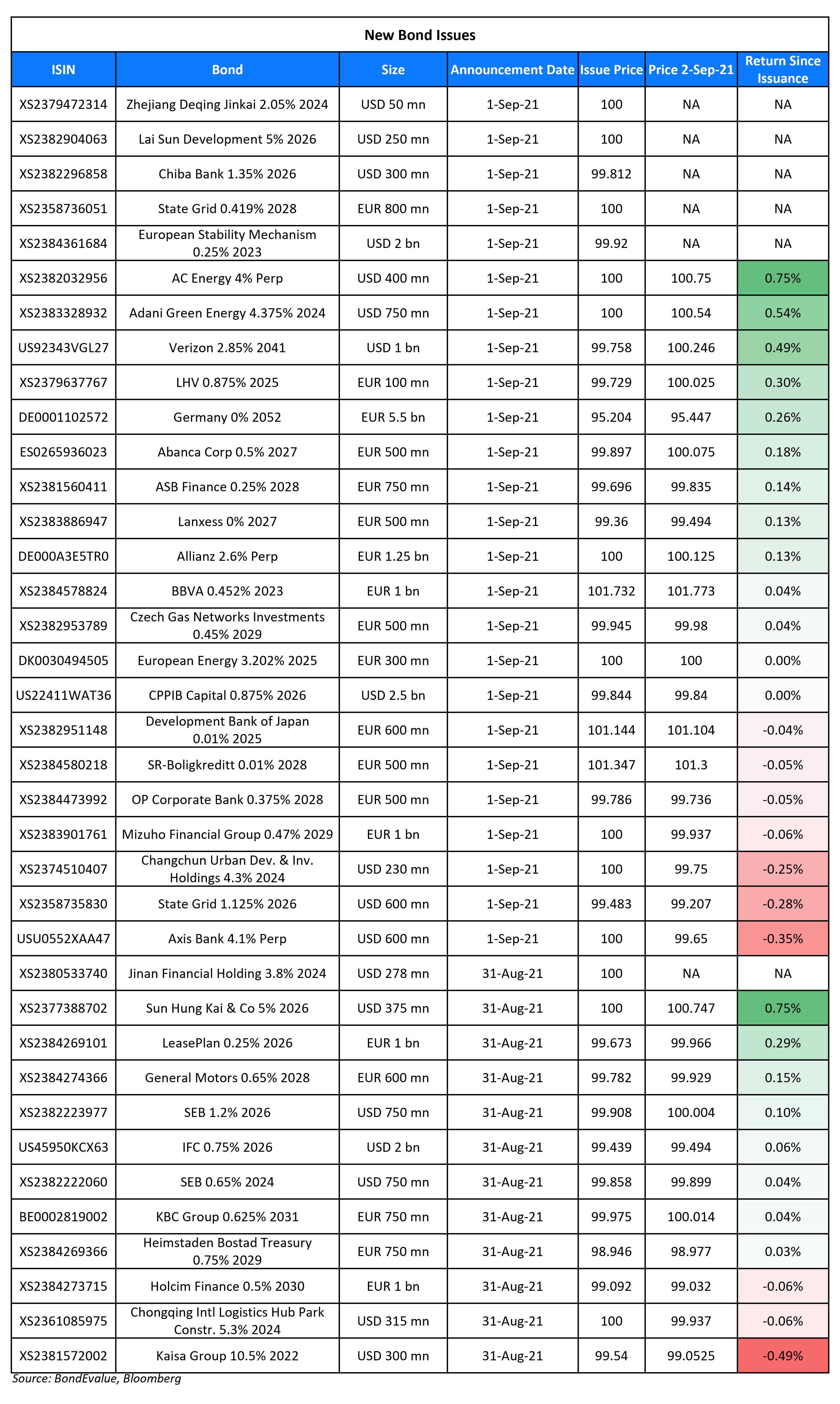 Axis Bank raised $600mn via a perpNC5 AT1 sustainable bond at a yield of 4.1%, 30bp inside initial guidance of 4.4% area. The bonds have expected ratings of B1 and received orders over $1.8bn, 3x issue size. Proceeds will be allocated to eligible green and social projects under the issuer’s sustainable financing framework, which has been reviewed by Sustainalytics. The notes will be written down if the Reserve Bank of India deems the bank would fail without a write down or an injection of public funds, or if the bank’s CET1 ratio drops to 5.5%. The CET1 trigger ratio applies until the end of September, before rising to 6.125% from October 1, when the RBI will implement an additional capital conservation buffer. If not called on September 8, 2026, the coupon will reset on March 8, 2027 and every 5Y thereafter to the Treasury yield plus a margin of 331.5bp. The bonds are set to be the first ever sustainable issuance from an Indian bank and are priced 43bp wider than HDFC Bank’s 3.7% AT1s, priced on August 19, that currently yield 3.67%. “We see the fair value for Axis Bank at around 4%, representing 35–40bp premium over HDFC Bank AT1 bonds in the secondaries,” said Yustina Quek, analyst at CreditSights. Asian investors were allocated 58%, European investors 20% US 16% and Middle East 6%. Fund managers received 72%, sovereign wealth funds, provident funds and insurers 11%, private banks 9%, banks 7% and others 1%.

Adani Green Energy raised $750mn via a 3Y bond at a yield of 4.375%, 32.5bp inside initial guidance of 4.7% area. The bonds have expected ratings of Ba3 and received orders over $3.7bn, 4.9x issue size. Proceeds will be used for onward lending to the issuer’s subsidiaries and for capital expenditure to fund renewable projects under the eligible green project criteria covered in its green financing framework. ASIA, EMEA and US took 48%, 28% and 24% respectively. Fund/Asset Managers were allocated 93%, Private Banks 5%, and Banks, Financial Institutions 2%. The new bonds, issued at the holdco level, are priced 114.5bp wider to its older 6.25% 2024s, issued at the opco level and rated BB- that currently yield 3.23%.

Lai Sun Development raised $250mn via a tap of its existing $250mn 5% 2026s at a yield of 4.999%. The unrated bonds received orders over $1.1bn, 4.4x issue size. The new notes will be fungible with the outstanding bonds after a 40-day compliance period. With the new issuance, the total outstanding amount of the 5% 2026s is $500mn. Proceeds will be used for general corporate purposes. The bonds will be issued by wholly owned subsidiary Lai Sun MTN and guaranteed by the parent. Asia Pacific investors took 99% with the rest going to EMEA. Fund/ asset/ pension managers received 54%, private banks 45% and others 1%. The existing 5% 2026s currently yield 4.88%.

AC Energy raised $400mn via a fixed-for-life green perp non-call 3.5Y at a yield of 4%, 45bp inside initial guidance of 4.45% area. The unrated bonds received orders of $1.88bn, 4.7x issue size. Proceeds will be used to finance or refinance eligible green projects under the guarantor’s green bond framework. The notes will be issued by wholly owned subsidiary ACEN Finance and guaranteed by the parent. There is a change of control put option at 101. Asset/fund managers took 59%, banks 28% and private banks 13%. Asia ex-Philippines took 70%, the Philippines 25% and Europe 5%. The new bonds are priced 72bp wider to its existing 5.1% perps that yield 3.73%.

Japanese lender Chiba Bank Ltd raised $300mn via a 5Y bond at a yield of T+62.5bp, 37.5bp inside the initial guidance of T+100bp area. The bonds have expected ratings of  A1 and received orders over $3.5bn, 11.7x issue size. Proceeds will be used for general corporate purposes.

Changchun Urban Development & Investment Holdings raised $230mn via a 3Y bond at a yield of 4.3%, 30bp inside the initial guidance of 4.6% area. The bonds have expected ratings of  Baa1/BBB+ and received orders over $770mn, 3.3x issue size. Proceeds will be used for debt refinancing. The bonds will be issued by subsidiary Chang Development International and guaranteed by the parent. Banks and financial institutions got 90% with the rest allocated to fund managers, sovereign wealth funds and private banks. Changchun Urban Development & Investment Holdings is an investment and financing vehicle in Changchun city, Jilin province, and is wholly owned by the Changchun SASAC. Its businesses include urban drainage pipelines, engineering construction, water treatment and financial services.

Zhejiang Deqing Jinkai raised $50mn via a 3Y SBLC-backed bond at a yield of 2.05%, 15bp inside the initial guidance of 2.2% area. The bonds are backed by a standby letter of credit from Bank of Hangzhou, Huzhou branch. Proceeds will be used for project construction, general corporate purposes and working capital. The issuer is wholly owned and controlled by the Deqing SASAC and it’s businesses include urban infrastructure construction, land development, water supply and sewage treatment in Deqing city, Zhejiang province.

Development Bank of Japan Inc raised €600mn via a 4Y sustainable bond at a yield of MS+11bp, 3bp inside the initial guidance of MS+14bp area. The bonds have expected ratings of  A1/A and received orders over €2.2bn, 3.7x issue size.

Mizuho Financial Group Inc raised €1bn via a 8NC7 bond at a yield of MS+68bp, 2bp inside the initial guidance of MS+70bp area. The bonds have expected ratings of A1/A- and received orders over €1.4bn, 1.4x issue size.

Restricted Tier 1 (RT1) bonds are junior subordinated securities issued by insurers that qualify as capital under Europe’s insurance regulation (known as Solvency II). To qualify as Tier 1 capital, the bonds must be perpetual with a minimum 10-year non-call, no step-up in coupon and a contractual trigger to principal write-down or equity conversion. According to the Solvency II directive, RT1s will automatically convert into equity or be written down upon three events: 1. Breach of the Solvency Capital Requirement (SCR), which defines the capital required to ensure that the insurance company can meet its obligations over the next 12 months, for more than three months 2. Drop of solvency ratio below 75% of the SCR 3. Breach of the Minimum Capital Requirement (MCR), which is the threshold below which the national regulator would intervene Allianz EU raised EUR 1.25bn of Perp NC10.6 RT1s on Wednesday.

On the risk of faster inflation than expected – Jens Weidmann, Bundesbank President
“We have to watch the risks to the outlook for prices. In my view, upside risks predominate.” “Accommodative monetary remains appropriate. But we shouldn’t disregard the risk to too-fast inflation.”

On the view that bonds are ‘investment garbage’ due to ultra-low yields – Bill Gross, co-founder of Pacific Investment Management Co

“Cash has been trash for a long time, but there are now new contenders,” said Gross. “Intermediate to long-term bond funds are in that trash receptacle for sure, but will stocks follow? Earnings growth had better be double-digit-plus or else they could join the garbage truck.”

“How willing, therefore, will private markets be to absorb this future 60% in mid-2022 and beyond?” Gross wrote. “Perhaps if inflation comes back to the 2%+ target by then, a ‘tantrum’ can be avoided, but how many more fiscal spending programs can we afford without paying for it with higher interest rates?”
On taper welcomed by risky emerging bonds with world-beating rally
Eugene Leow, a fixed-income strategist at DBS Group Holdings Ltd
“Investors are getting pushed into higher-yielding EM government bonds.” “Developed-market yields stayed persistently low even as Powell guided that the taper is set to start later this year.”
Gabriel Chan, head of investment services for Hong Kong at BNP Paribas Wealth Management
“It is particularly true for countries with higher rates like South Africa, Turkey and Indonesia,” he said.
On Argentina’s markets soaring as investor outlook turns positive
Sabrina Corujo at consultancy Portfolio Personal Inversiones.
“The post-restructuring payment outlook looks clear in years ahead, the economy is recovering, the central bank seems to have stabilized the exchange rate and slowly recover reserves.” “We are clearly not in the best of scenarios – or close to it – but we’re not under the shadow of default.”
Gustavo Ber from Estudio Ber
“The result will be crucial to forcing consensus that will allow post-election strategies to address fiscal and monetary issues, as well as stabilizing divergent currency exchange rates.” “It’s also key to an agreement with the IMF to refinance payments.” 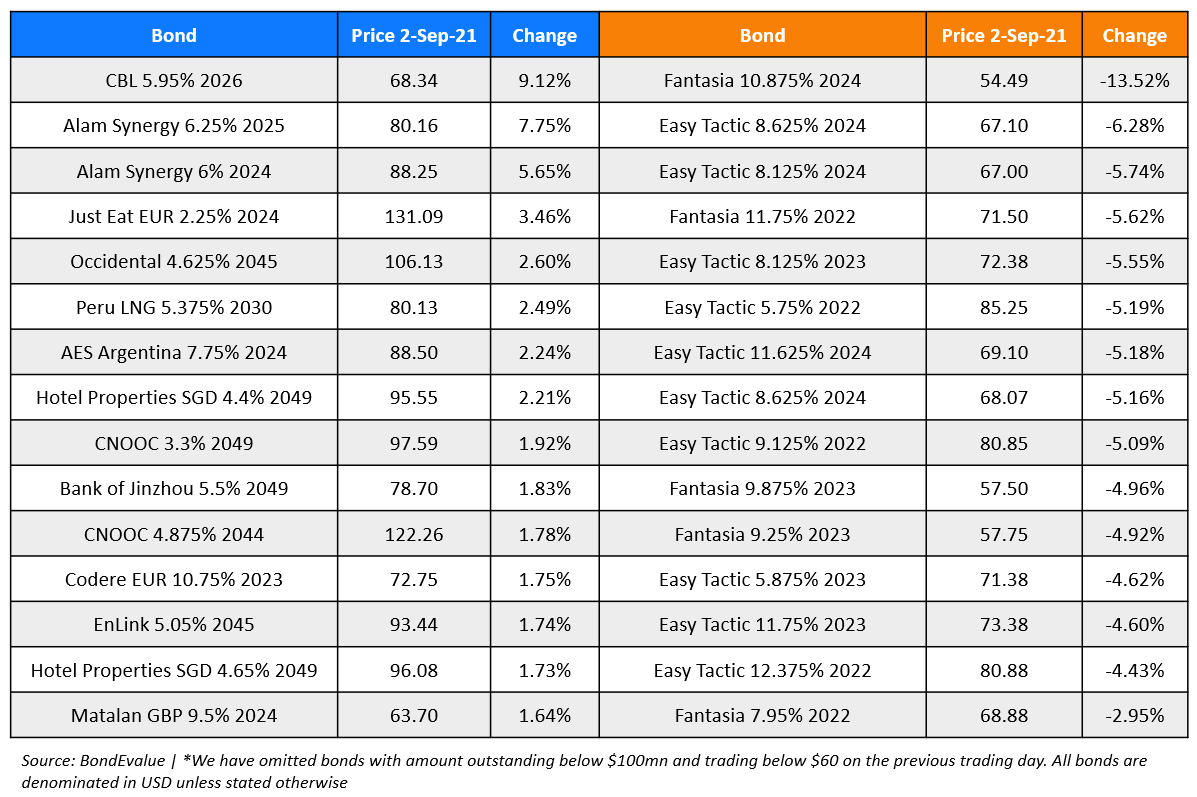