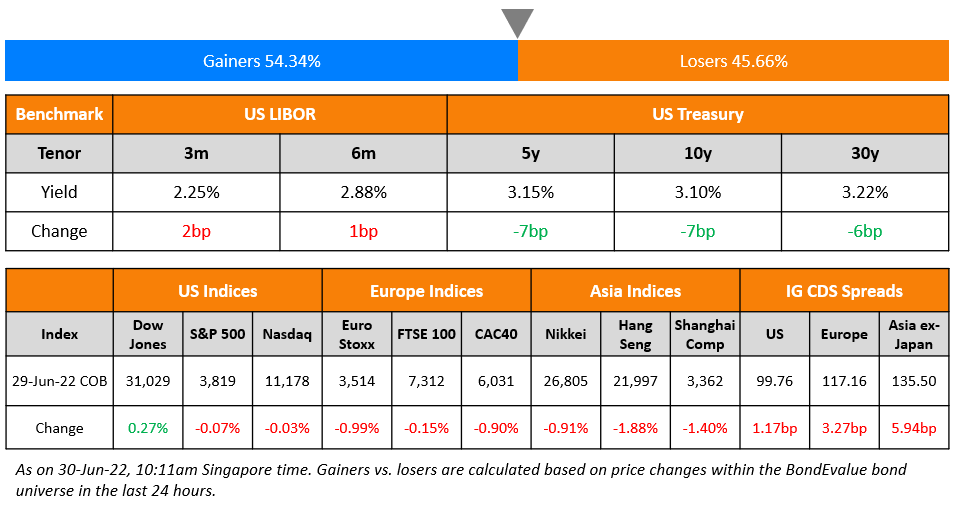 US equity markets were calm on Wednesday with the S&P and Nasdaq ending almost flat. Sectoral losses were led by Energy down 3.4% while gains were led by Healthcare, up 0.9%. US 10Y Treasury yields were 7bp lower at 3.10% with market analysts now talking about fears of a recession being the driving factor behind the pullback in yields from highs of 3.47% in mid-June. European markets trended lower with the DAX and FTSE down 1.7% and 0.2% respectively while CAC was flat.  Brazil’s Bovespa was down 1%. In the Middle East, UAE’s ADX fell 0.4% while Saudi TASI gained 0.5%. Asian markets have opened mixed – STI and Nikkei were down 0.4% and 0.9% respectively, while Shanghai and HSI gained 1.3% and respectively. US IG CDS spreads widened 1.2bp and US HY spreads were wider by 8bp. EU Main CDS spreads were 3.3bp wider and Crossover spreads were wider by 21.5bp. Asia ex-Japan IG CDS spreads widened 6bp.

German inflation in June fell unexpectedly to 8.2% as compared to forecasts of 8.8% and from 8.7% in May. This was on account of temporary government relief measures and lowering fuel prices. Spanish inflation jumped to 10% in June, highest in last 27 years, on higher energy and food prices as against 8.7% in May.

Only few hours to go for the live masterclass on sovereign debt restructuring! The 90-minute session, to be conducted live via Zoom today, Thursday, 30 June, will be conducted by Asian high yield and liability management expert Florian Schmidt.

The session will be particularly insightful for bond investors who own EM sovereign debt as well as advisors whose clients hold these bonds. In particular, this Thursday’s session will offer guidance on what to expect if you own dollar bonds of Sri Lanka (already defaulted) and/or other sovereigns such as Pakistan (distressed). Click on the banner below to sign up. 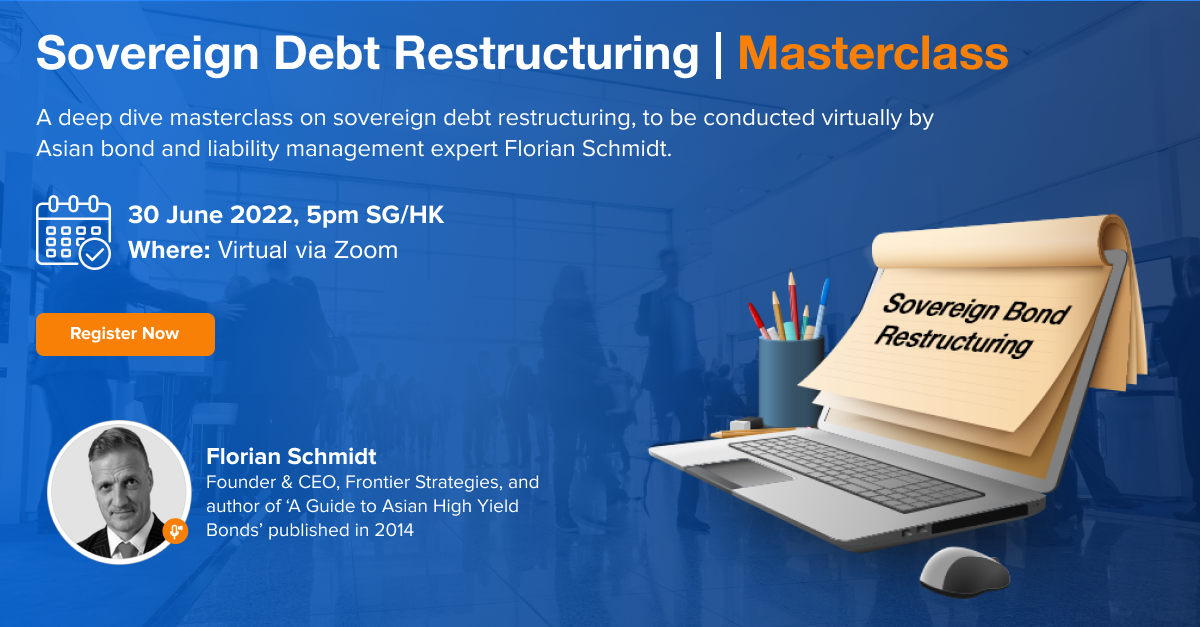 Qingdao City Construction Investment raised $750mn via a 3Y bond at a yield of 4.8%, 40bp inside initial guidance of 5.2% area. The bonds have expected ratings of BBB+ (Fitch), and received orders over $2.4bn, 3.2x issue size. Proceeds will be used for refinancing offshore debt.

As the name suggests, these are bonds that do not pay coupons. Given the lack of coupons, the price changes in the bond due to a change in interest rates (duration) can be sharper than coupon-paying bonds. But the lack of coupon means that there are no reinvestment risks and therefore unless a default occurs, the bondholder will get the stated yield at the time of buying. For example, if a 5Y zero coupon bond that has a yield to maturity of 3% is bought, the investor will get a 3% return if held to maturity since he/she doesn’t have to reinvest any cashflows. Whereas, in a 5Y 3% coupon-paying bond that has a yield to maturity of 3%, the investor must be able to reinvest the coupons at 3% consistently over the 5Y period to get a return of 3% – if interest rates fall, he/she would end up with a lower return since the coupons are reinvested at a lower rate. These bonds are generally issued at a discount to par value and get redeemed at par.

“Of course we should see some change in the data, some change in relation to what we have seen at the beginning of June. But if we see this change in data that points to the persistence of inflation, to its acceleration, 50 basis points should be a policy option for July.”

“If fiscal policy remains supportive, then we have to do more. The end game is higher deficits and higher interest rates, and therefore also a higher risk of fragmentation… It’s hard to think about unwarranted fragmentation that would justify us being present in the markets on a permanent basis… We can be gradual in some way, but our definition of gradual explicitly makes room for hikes that are bigger than 25 points”

“These simulation results, coupled with research suggesting that persistent elevated inflation poses an increasing risk that inflation expectations could become unanchored, strongly argue against policy makers being complacent about a rise in longer-term expectations… We take all the data into account, at least when I’m setting my own policy views. It’s based on not just one data point.”

PBOC will “coordinate work on stabilizing employment and prices

The absence of that phrase (keep the macro leverage ratio basically stable) “suggests policy makers might aim to accelerate credit growth in the near term.” 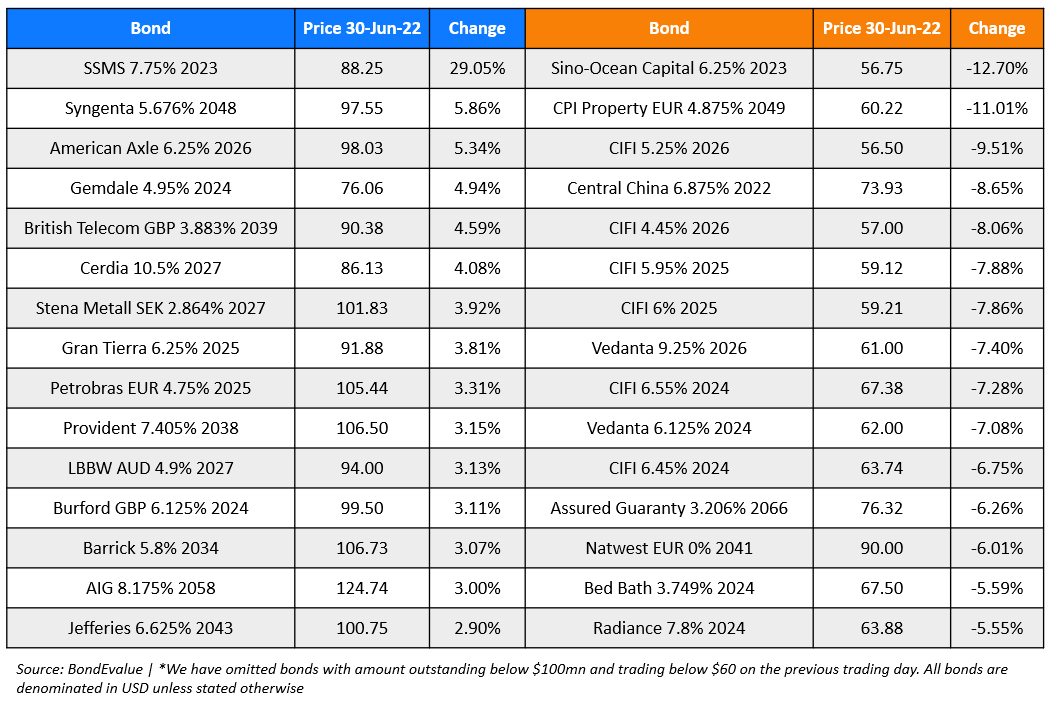