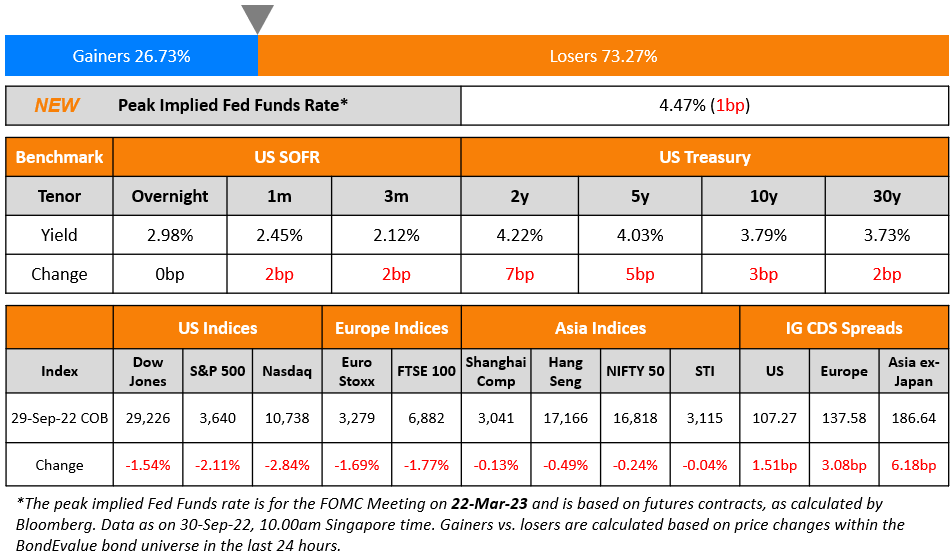 European equity markets were broadly negative, down over 1.5% and credit markets saw EU Main CDS spreads widen by 3.1bp and Crossover spreads move 11.6bp higher. Inflation in Germany surged to 10% in September, against estimates of 9.4% and August’s print of 7.9%. Also, the ECB’s preferred gauge of inflation, the Harmonised Index of Consumer Prices (HICP) hit double digits for the first time in 20 years to 10.9% for September against expectation of 10%, and August’s 8.8% print. Regarding the sell-off in UK gilts earlier this week, it is said that Liability Driven Investors (LDIs) like pension funds had exacerbated the move on the long-end after having received margin calls. CNBC notes that long-maturity bonds represent around 67% of Britain’s roughly £1.5tn ($1.6tn) liability driven investment funds that are leveraged and use gilts as collateral to raise cash.

Kepco raised $800mn via a two-tranche green deal. It raised

Tongling State-owned Capital Operation Holding Group raised $200mn via a 3Y bond at a yield of 6%, 45bp inside the initial guidance of 6.45% area. The senior unsecured credit enhanced bonds are unrated and supported by a letter of credit from Huishang Bank.

Catastrophe Bonds also referred as Cat Bonds are risk-linked securities that are designed in favor of the issuer as these allow the transfer of risks related to a major catastrophe or a natural disaster to the investors. These are generally high yield debt instruments that payout to issuers in case of specific triggers. These bonds essentially act as insurance policies against natural disasters and are generally purchased by governments, insurance and reinsurance companies. In the event of a trigger event, the proceeds are paid to the borrower and the principal repayment and interest payments are either deferred or cancelled. In case the trigger event does not occur, the borrower continues to pay the interest and the principal as scheduled, similar to a regular bonds. These bonds have gained traction as the frequency of natural disasters is on the rise.

“I’m quite comfortable. It’s going to take restrictive policy for a duration of time to get clear and convincing evidence that inflation is getting back to 2% — so from my mind, that’s at least through next year… I’m really looking at have financial conditions tightened more than the funds rate has tightened, and more than they were projected to be tight”

On BlackRock, Amundi Stumbling in China as Wealth Products Disappoint

“They entered the market at a difficult time. For fixed income-focused Amundi, it faces an environment where onshore yields are falling… Amundi made it clear from the outset of this joint venture that it will stay away from the shadow-banking exposure that is a yield-enhancing staple of products from local banks. It is essentially a trade-off between instilling global risk management standards and meeting onshore performance expectations”