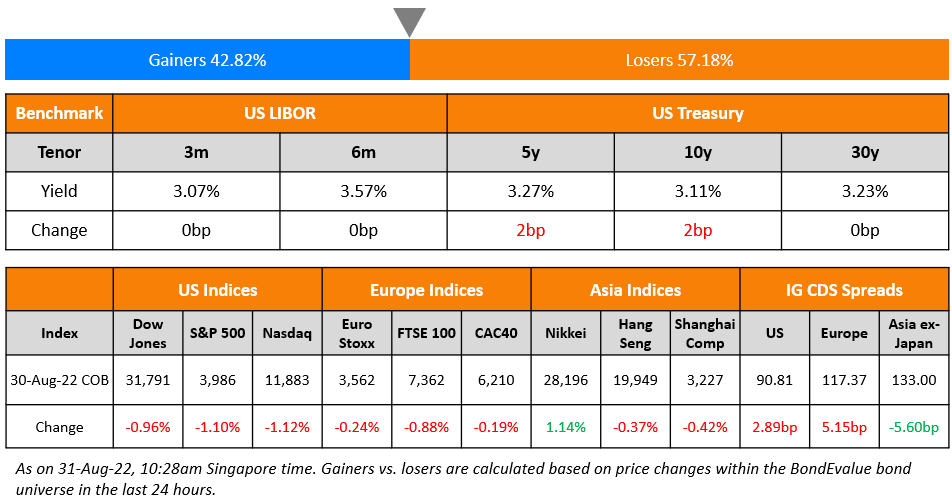 US equity markets further extended its downward move on Tuesday with the S&P and Nasdaq down by 1.1% each. All sectors were in the red, with Energy falling the most, by 3.4%, followed by Industrials and Materials, down over 1.5% each. US 10Y Treasury yields were 1bp lower at 3.09%. European markets were mixed – DAX ended 0.5% higher while CAC and FTSE were down 0.2% and 0.9% respectively. Brazil’s Bovespa was down 1.7%. In the Middle East, UAE’s ADX ended almost unchanged while Saudi TASI was down 0.6%. Asian markets have opened with a negative bias today – Shanghai, HSI, STI and Nikkei were down 0.8%, 1.2%, 0.7% and 0.6% respectively. US IG CDS spreads widened 2.9bp and US HY spreads were wider by 14.4bp. EU Main CDS spreads were 5.2bp wider and Crossover spreads widened by 21.7bp. Asia ex-Japan IG CDS spreads tightened 5.6bp. 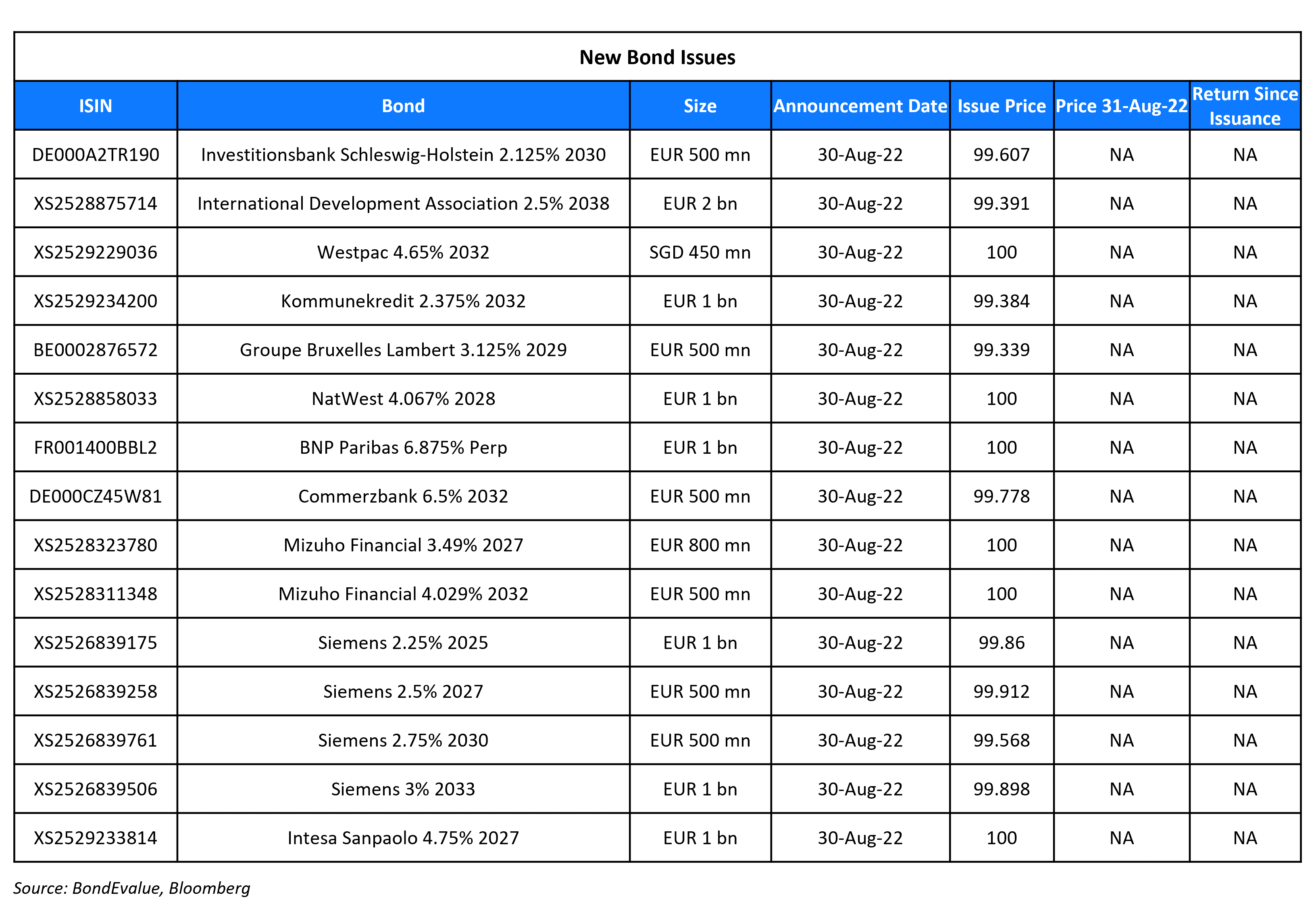 BNP Paribas raised €1bn via a PerpNC7.25 AT1 bond at a yield of 6.869%, 13.1bp inside initial guidance of 7% area. The AT1 Perps have expected ratings of Ba1/BBB-/BBB, and received orders over €1.7bn, 1.7x issue size. Proceeds will be used for the general corporate purposes. The bonds have a call date on 6 December 2029 and every five years thereafter. If not called, the coupon rate resets to 5Y EURIBOR plus a spread of 464.5bp.

NatWest raised €1bn via a 6NC5 green bond at a yield of 4.067%, 25bp inside initial guidance of MS+210bp area. The bonds have expected ratings of Baa1/BBB/A, and received orders over €1.9bn, 1.9x issue size. Proceeds will be used to finance Eligible Green Loans in the ‘Renewable Energy and Green Buildings’ categories as described in NatWest’s ‘Green, Social and Sustainability Bond Framework’. The bonds have a call date of 6 September 2027. If not called, the coupon rate will reset quarterly to 3M EURIBOR plus a spread of 191.4bp

The senior unsecured bonds have expected ratings of A1/A+. Proceeds will be used for general corporate purposes.

The ‘three red lines’ are leverage guidelines set for select property developers in China. They consist of caps on the following ratios:

These ratios were devised by China’s PBOC and Ministry of Finance. Not adhering to these ratios would result in them being cut-off from new loans. Those who adhere to all three ratios can increase debt by 15% in the subsequent year.

“We need to have somewhat restrictive policy to slow demand and we’re not there yet”. The size of the move at the Fed’s move at its Sept. 20-21 meeting will depend on the “totality” of the data.

“Incoming data — if they clearly show that inflation has begun slowing — might give us reason to dial back from the hikes of 75 basis points that the Committee implemented in recent meetings. We will have to see how those data come in… History is instructive on this point… This summer’s data showed glimmers of good news on the fight against inflation”

“Remain cautious on credit. With labor markets too strong and inflation too high, tightening needs to persist with risks to growth and vol now greater to the downside and upside, respectively, implying a widening bias for spreads”… Current credit spread levels imply a 25% chance of a recession, compared to UBS’s forecast of a 55% chance. 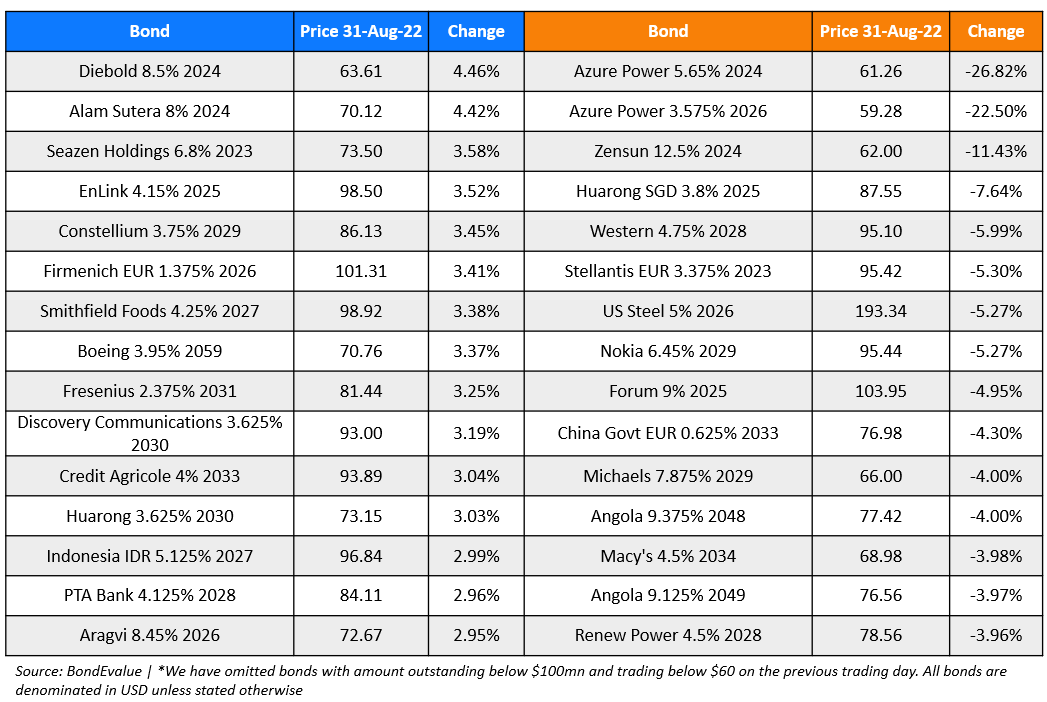