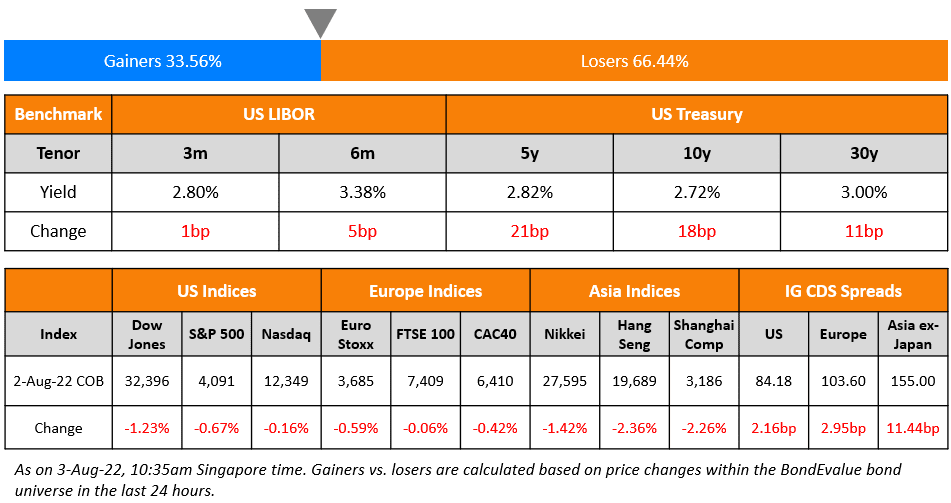 US equity markets ended lower on Tuesday with the S&P and Nasdaq down 0.7% and 0.2% respectively. Sectoral losses were led by Real Estate down by 1.3%, Industrial, and Financials down 1% each. US 10Y Treasury yields rose 18bp to 2.72% on hawkish commentary from Fed officials. European markets also ended mixed – the DAX and CAC were down 0.2% and 0.4% respectively while the FTSE was flat. Brazil’s Bovespa was up by 1.1%. In the Middle East, UAE’s ADX rose 1.2% while Saudi TASI fell 0.2%. Asian markets have opened in the green – STI, Shanghai, HSI and Nikkei were up 0.3%, 0.2%, 0.3% and 0.5% respectively. US IG CDS spreads widened 2.2bp and US HY spreads were wider by 11.1bp. EU Main CDS spreads were 3bp wider and Crossover spreads were widened by 18.9bp. Asia ex-Japan IG CDS spreads widened 11bp.

In the US, the number of job positions available fell to 10.7mn in June vs. 11.3mn in May, indicating easing of tightness in the labour market as economic pressure rises. Meanwhile, the Reserve Bank of Australia lifted benchmark rates by 50bp to 1.85%, the fourth consecutive hike. Central bank expects slower economic growth in 2022 and 2023. 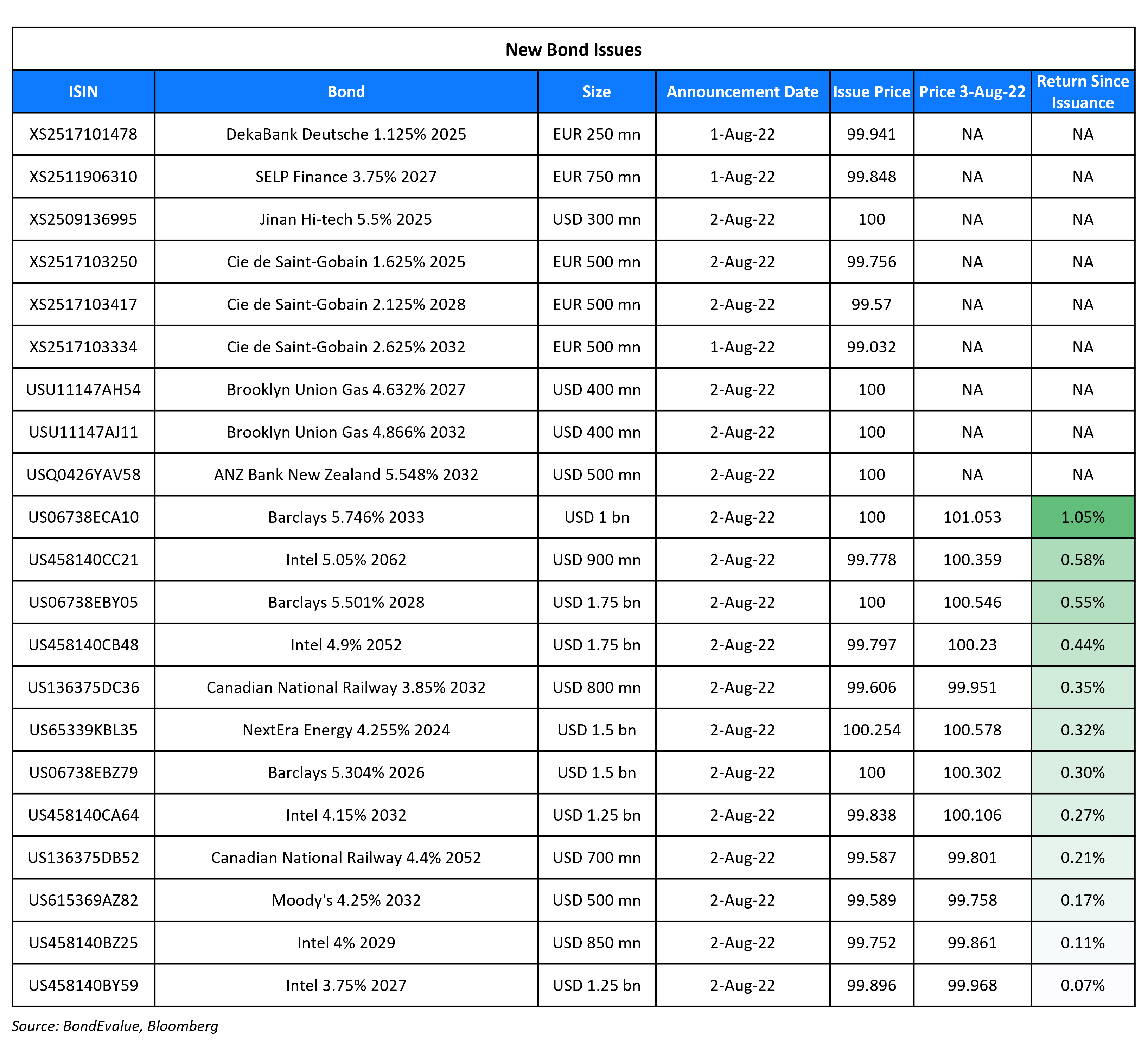 Barclays raised $4.25bn via a three-tranche deal. It raised:

The senior unsecured bonds have expected ratings of Baa2/BBB. Proceeds will be used for refinancing and general corporate purposes. This comes just a day after the British lender raised $2bn via a PerpNC7 AT1 at a yield of 8%.

Intel raised $6bn via a five-tranche deal as seen in the table below:

The senior unsecured bonds have expected ratings of A1/A+. Proceeds will be used for general corporate purposes and redemption of the $400mn outstanding 4.10% Altera senior notes due 2023.
Moody’s raised $500mn via a Will Not Grow (WNG) 10Y bond at a yield of 4.301%, 22bp inside the initial guidance of T+180bp area. The bonds have expected ratings of BBB+/BBB+ (S&P/Fitch). Additionally, the bond has a change of control put at 101, 3 month par call option and a make whole call (MWC) provision as well.

ANZ Bank raised $500mn via a 10NC5 144A bond at a yield of 5.548%, 30bp inside the initial guidance of T+300bp area. The bonds have expected ratings of A1/AA-/A+. The call date for the bonds is Aug 11 2027.  If the bonds are not redeemed, it will reset on the same date. The reset margin was not specified and might be announced at a later date. The bonds can be redeemed in whole or in part on the call date, or at any time for certain tax or regulatory reasons subject to written approval from the Reserve Bank of New Zealand and satisfaction of solvency conditions.

The US Treasury yield curve was inverted at the end of July following the 75bp rate hike at the last FOMC meeting – the 2s10s ended July at negative 22bp vs. positive 4bp at the start of July. 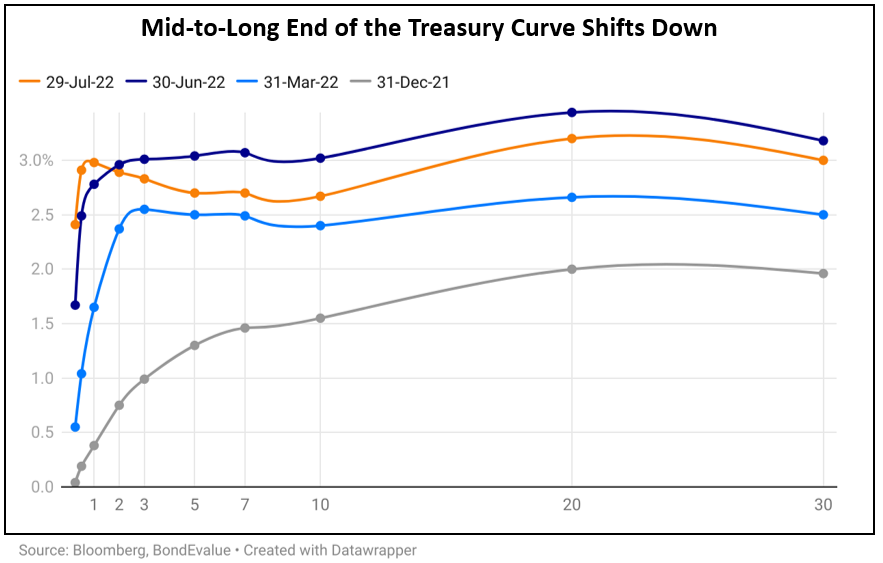 To read the full July 2022 report with trends in the IG and HY space, issuance volumes, largest deals and top gainers and losers, click on the button below.

In an interview on LinkedIn, she said that the central bank was “nowhere near” done with its fight to cool inflation, which continues to run at 40-year highs. Her remarks come after the Fed’s meeting last week at which chair Jay Powell suggested it might be appropriate to slow the pace of interest rate increases, prompting a relief rally in markets.

In a separate interview on Tuesday, Chicago Fed president Charles Evans said he thought that a 0.5 percentage point increase at the next meeting in September would be appropriate. However, he left the door open to a larger 0.75 percentage point rise, which he said “could also be OK”. Also on Tuesday, Cleveland Fed president Loretta Mester in an interview with The Washington Post, said she expects below-trend economic growth for this year, which she added is necessary to rein in inflation. She did not believe the US is in a recession given the continued strength of the labour market. Mester is known to be among the more hawkish members of the Federal Open Market Committee.

On Being too Early on Fading Recession Risk

“Looking at the re-pricing of cyclical assets in the US and EU, we think the market might have been too complacent too soon in fading recession risks on expectations of a more accommodative monetary policy stance…We think markets will be vulnerable to hawkish surprises if inflation continues to struggle to re-set and growth surprises — if the slowdown in activity results in a more prolonged/deeper downturn.”

“We have found a very nice pocket of sustained market stability in investment grade for the first time in months…There’s all these reasons why September is a really big month for issuance, but we’ve also got a Fed meeting, and a whole bunch of other landmines that could complicate September too.”

On Argentina Running Out of Cash to Stave Off Devaluation

“The problem is we have never had such a weak real exchange rate, nor such a wide gap between the official and parallel rates, while reserves were this low, … The government won’t be able to hold out much longer without a one-off devaluation

“The central problem remains that there is no easy solution to the crisis, … High inflation is making the government unpopular and driving capital flight.”

On UK Corporate Insolvencies Near a 13-Year High

Samantha Keen, a partner at EY-Parthenon

“The record levels of CVLs are the first tranche of insolvencies we expected to see involving companies that have struggled to stay viable without the lifeline of government support provided over the pandemic, … We expect further insolvencies in the year ahead among larger businesses who are struggling to adapt to challenging trading conditions, tighter capital, and increased market volatility.”

“The broader fixed-income market conditions have adversely impacted sustainable bond volumes so far in 2022, as the Russia-Ukraine military conflict has impaired global economic growth prospects, stoked existing inflationary pressures and heightened the prospects for accelerated monetary policy tightening…Also, given APAC’s inherent challenge of having a high proportion of hard-to-abate sectors, coupled with an insufficient amount of eligible projects to finance using use-of-proceeds bonds, transition financing via SLBs and other transition instruments will continue to gain traction in the region.” 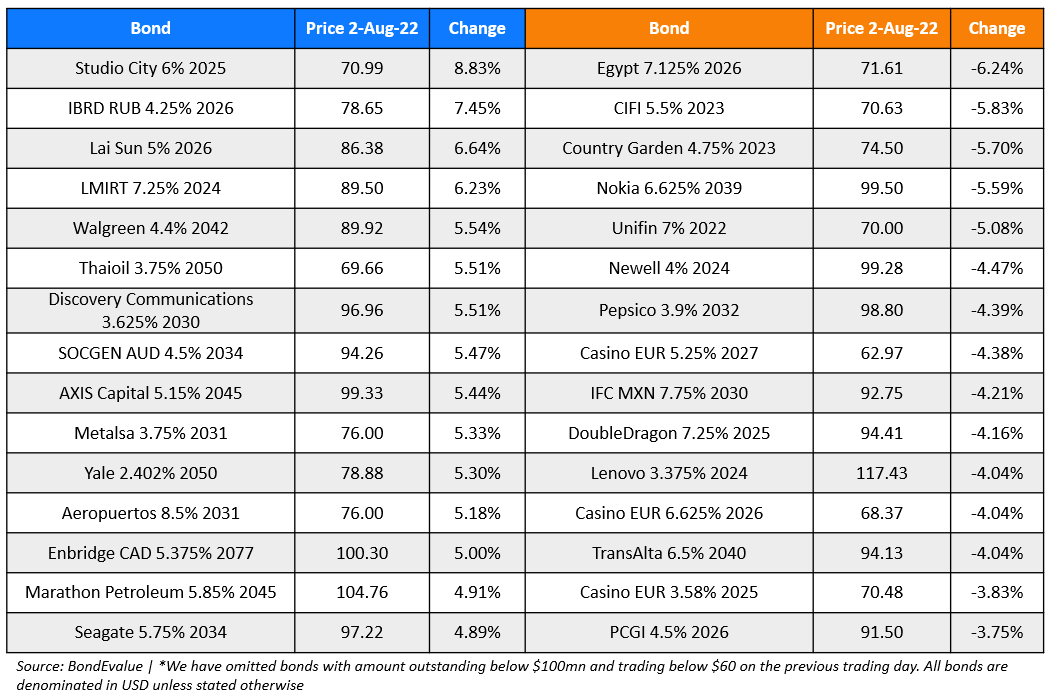