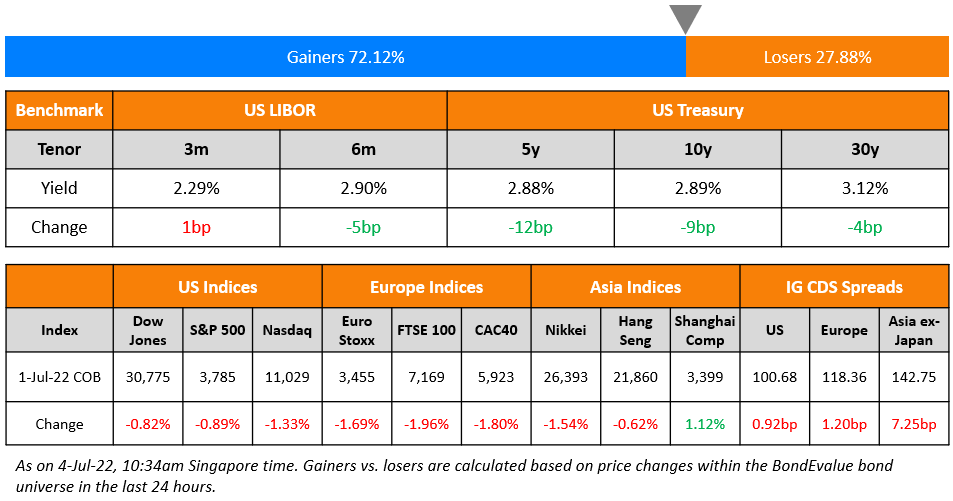 US equity markets ended last week on a higher note with the S&P and Nasdaq up 1% and 0.9% on Friday. Sectoral gains were led by Utilities up 2.5% followed by Communication Discretionary up 2%. US 10Y Treasury yields tumbled 9bp at 2.89% on economic growth and recession worries. European markets also ended largely higher with the DAX and CAC up 0.2% and 0.1% respectively, while the FTSE was flat. Brazil’s Bovespa was up 0.4%. In the Middle East, UAE’s ADX closed 0.3% down on Friday and Saudi TASI was 0.5% lower on Sunday. Asian markets have also opened mix – HSI was down 0.6%, while  Shanghai, STI and Nikkei up 0.1%, 0.9% and 6% respectively. US IG CDS spreads widened by 0.9bp and HY spreads were 2bp tighter. EU Main CDS spreads were 1.2bp wider and Crossover spreads were 10.7bp wider. Asia ex-Japan IG CDS spreads widened 7.2bp.

Sweden’s Riksbank raised its benchmark rate by 50bp to 75bp last week, the highest increase in the last two decades. The central bank expects policy rates to touch 2% by early 2023. On the inflation front, Eurozone inflation was at 8.6% in June, largely in-line with economists’ projections of 8.5% and higher than the 8.1% print in May. Inflation in Pakistan surged to 21.3% in June vs. 13.8% in May. This was also significantly higher than forecasts of a 17.9% print.

Mashreq Bank raised $300mn via a PerpNC5 AT1 bond at a yield of 8.5% as compared to initial guidance of low to mid 8%s. The bonds are unrated and received orders over $500mn, 1.7x issue size. The coupons are fixed until the first call/reset date of July 7, 2027 and if not redeemed, it resets then and every five years thereafter at the US 5Y treasury yield +544.8bp. This is Mashreq’s first ever AT1 offering in the international bond markets and the first AT1 issued from the UAE this year.

On Hot Inflation Keeping European Bond Funds on the Sideline

“Yields are now back to levels where people will start allocating to fixed income again.. A better entry point will be later in the year”

“The risks of a 2022 recession are significantly higher than I would have judged six or nine weeks ago. If the economy did go into recession in the next six to nine months, then you’d probably see a reduction in inflationary pressures… You’d see the Fed probably feel that it had to push rates up less”.

“Our forecast comes perilously close to a recession. However, we continue to look for the economy to expand, in part because we think employers may be reluctant to shed workers, even in a period of soft product demand.” 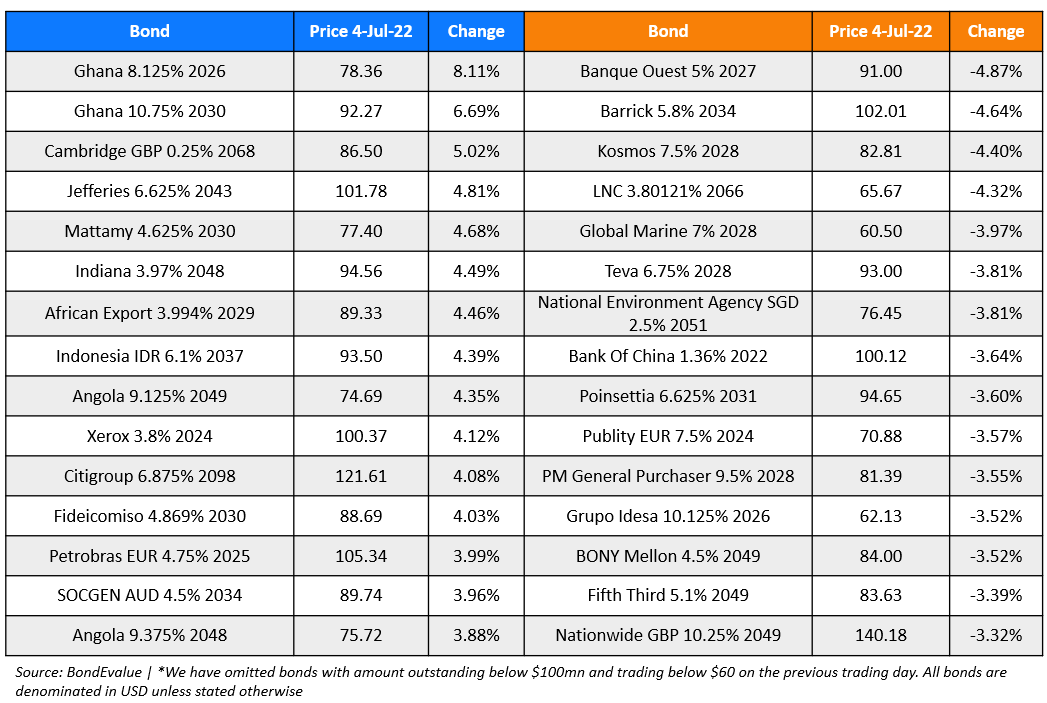