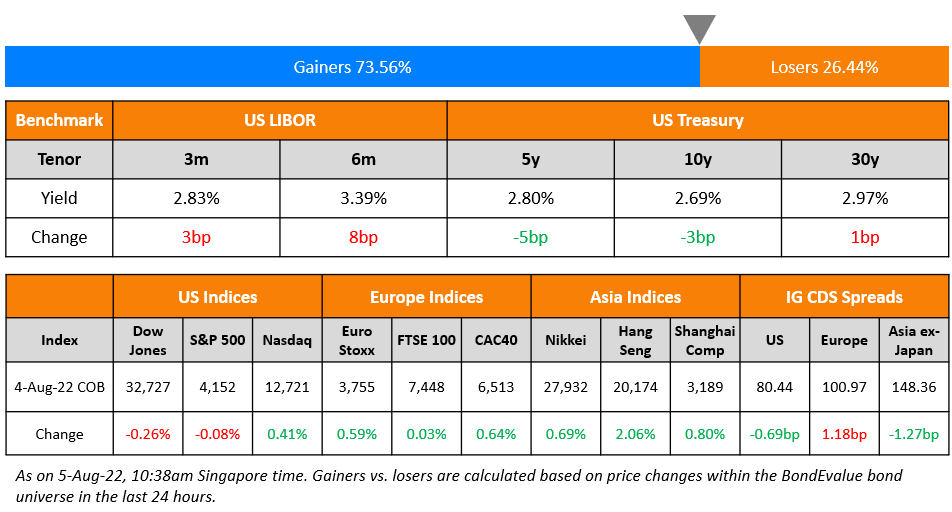 US equity markets ended mixed on Thursday with the S&P flat and Nasdaq up 0.4%. Sectoral losses were led by Energy down 3.6% and Consumer Staples down 0.8%; Consumer Discretionary was up 0.5%. US 10Y Treasury yields were 3bp down at 2.69%. European markets also ended mixed – DAX and CAC ended up 0.6% each while FTSE was flat. Brazil’s Bovespa gained 2%. In the Middle East, UAE’s ADX fell 0.3% and Saudi TASI ended flat. Asian markets have opened mixed – STI, Shanghai, and Nikkei were up 0.2%, 0.2%, and 0.7% respectively while HSI was flat. US IG CDS spreads tightened 0.7bp and US HY spreads were tighter by 5.8bp. EU Main CDS spreads were 1.3bp wider and Crossover spreads were widened by 10.5bp. Asia ex-Japan IG CDS spreads tighter by 1.3bp.

The Bank of England (BoE) raised its benchmark rate by 50bp, the most since 1995, to 1.75% in line with expectations. BoE has warned that the economy will slip into recession by the end of year, and will continue into 2023. The central bank expects inflation to peak at over 13% by October and to remain higher for most of 2023. From the next month, BoE will start selling £40bn ($49bn) worth of government bonds it purchased during its quantitative easing of 2012. 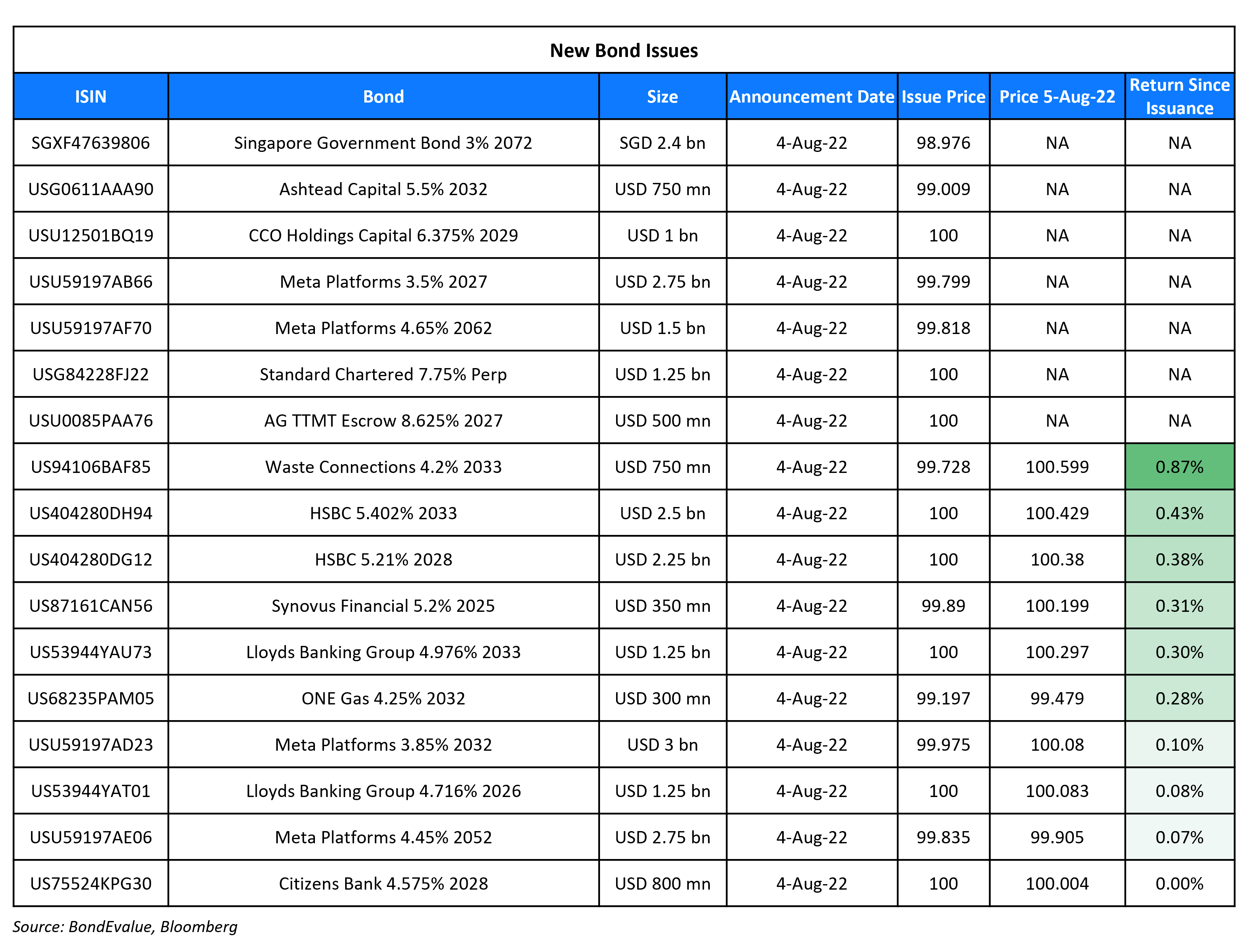 Standard Chartered raised $1.25bn via an AT1 PerpNC5.5 at a yield of 7.75%, 37.5bp inside the initial guidance of 8.125% area. The bonds have expected ratings of Ba1/BB-/BBB-. Proceeds will be used for general business purposes, including and without limitation to repurchase or refinance existing debt and to strengthen further its regulatory capital base. The first call date for the AT1s is on 15 February 2027 and the second call date is on 15 February 2028. If the bond is not called by the second call date, the coupon rate will reset then and every five years thereafter to the 5Y Treasury plus a margin of 497.6bp.

Aside from the call option, the bank also has the power to call back its AT1s in the event of tax changes or regulatory/capital disqualification. The bond’s coupon payments are fully discretionary, non-cumulative and “subject to sufficient Distributable Items” as per Bloomberg. Additionally, the bonds have a mechanical trigger which will activate when Standard Chartered’s CET1 ratio drops below 7%; the bonds will be automatically converted into ordinary shares if triggered. The new bonds are priced 147bp wider to its existing 6% Perps callable in 2025 that are currently yielding 6.28%.

The senior unsecured bonds have expected ratings of A1/AA-. Proceeds will be used for general corporate purposes.

HSBC raised $4.75bn via a two-tranche deal. It raised

The senior unsecured bonds have expected ratings of A3/A-. Proceeds will be used for general corporate purposes.

Lloyds raised $2.5bn via a two-tranche deal. It raised

The senior unsecured bonds have expected ratings of A3/BBB+. Proceeds will be used for general corporate purposes.

The Monetary Authority of Singapore (MAS) raised S$2.4bn ($1.74bn) via a 50Y debut Green Singa bond at a yield of 3.04%, 11bp inside the initial guidance of 3.15% area. While the bonds are unrated, the issuer is rated Aaa/AAA/AAA. The proceeds will be used in accordance with the SINGA and the Singapore Green Bond Framework.

Johnson Electric Holdings has decided to postpone its USD denominated 5Y bond after launching at an IPG of T+270bp on Thursday. The deal was pulled before the final price guidance was announced due to “unfavorable conditions” .

Prepaid Forward Contracts are predominantly used by investors who hold a large number of shares in a single firm. It allows these investors to pledge the sale of a certain amount of the shares that they hold, on a future date. Furthermore, instead of waiting for the future date to receive the proceeds of its sale, investors will receive prepayments on their stock sale upfront. These prepayments are akin to a tax-free deposit since the tax liabilities on the capital gains are not due until the transaction is settled on the future date. Additionally, these contracts give investors the possibility of holding on to more shares than the amount that they committed.

For example, Party A pledges $1mn of shares that are currently priced at $10 each. This amounts to 100,000 shares now. If the price drops below $10 in the future, Party A will still have to deliver 100,000 shares on the delivery date. However, if the price rises to $20 for example, Party A will only have to deliver 50,000 shares ($1mn divided by $20) on the future delivery date. Softbank has raised as much as $22bn in cash by selling more than half of its holdings in Alibaba Group through prepaid forward contracts.

“I would pencil in going a bit above four as appropriate… It’s not unreasonable I think to maintain that as where we’re getting to and then we’ll see…It’s not unreasonable to think we might have to do a 75 (basis point move) but I can imagine it could be a 50. We’ll just have to look at the data as it comes in”

On the Pound Dropping Not Being a Crisis for Now

“We don’t target the exchange rate… Recently it’s been a story of dollar strength. I don’t think sterling is in crisis at all…We’ve seen a shrinkage in the labor force… Firms feel they can raise prices quite easily at the moment. The worst thing that can happen is that inflation becomes embedded. That’s what worries me.”

On China ‘Living With Slightly Lower GDP Growth if Inflation Stays Below 3.5%

“If we can keep the unemployment rate below 5.5 per cent and the CPI rise stays under 3.5 per cent for the whole year, we can live with a growth rate that is slightly higher or lower than the target, not too low of course…Given the size of the economy, and a large number of people entering the labour force each year … should economic activity deviate from the proper range, it would entail enormous costs in bringing it back to track.”

“For the coming months, several factors will influence flows dynamics, among these the timing of inflation peaking and the outlook for the Chinese economy will be in focus.”

“It’s troublesome for [the 52 companies], because there’s lingering uncertainty and an unknown deadline as to when they might have to delist [in the US]… If they have to delist, they will have extra demand for capital to buy back the shares from smaller shareholders, causing problems to both their operations and financial situation.”

“If the US-listed Chinese companies do not qualify for a Hong Kong listing, essentially, they can either remain listed in the US with the hope that China and the US will come to an agreement on the audit inspection issue, or they can go private… However, going private will not be easy as many of these companies are not trading very well and market valuation will be low. So most of them are caught in the crossfire, and their US-listing status leaves them in a sticky position.” 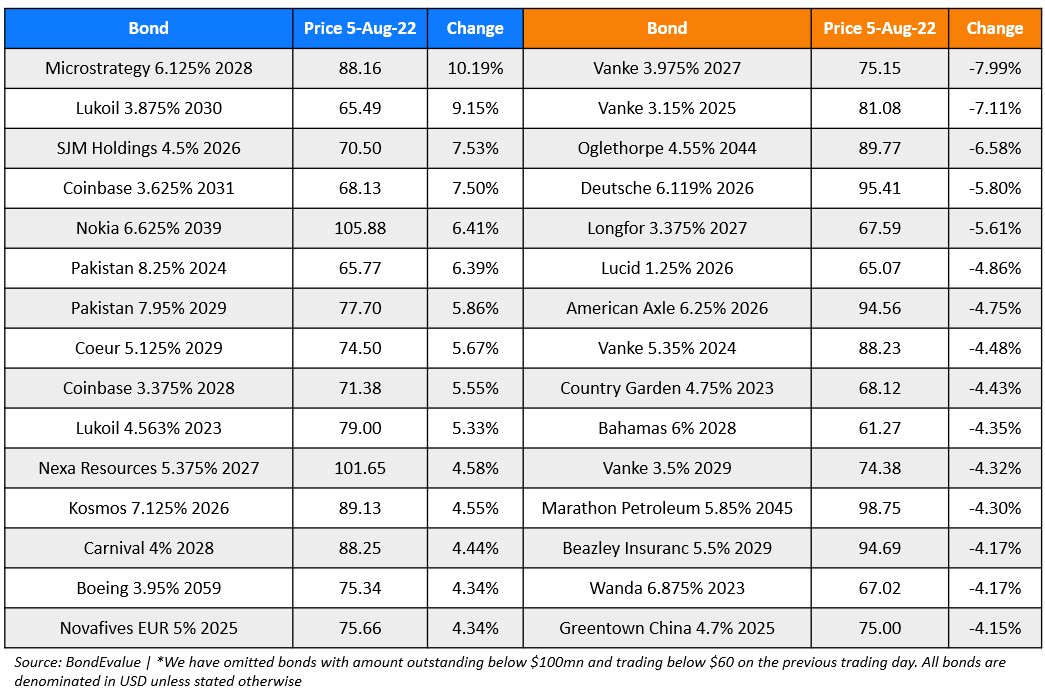