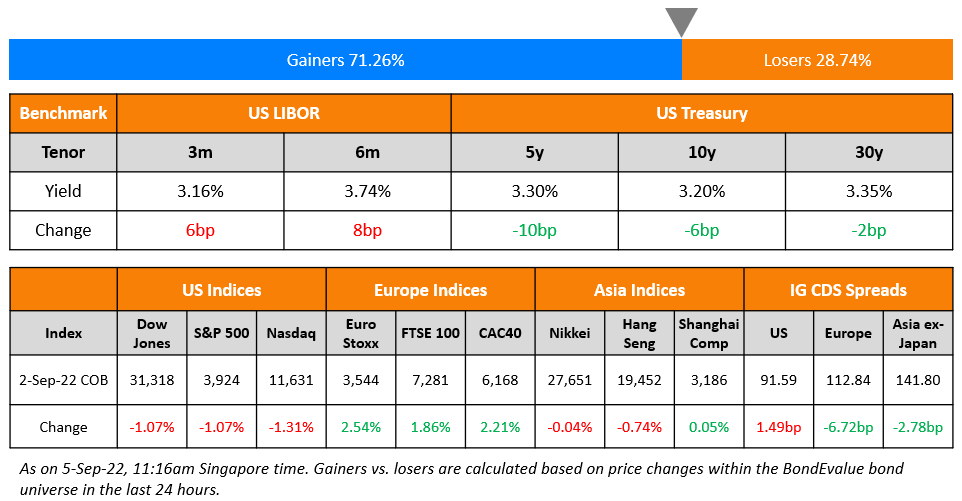 US 10Y Treasury yields fell 6bp to 3.2% and the 2Y yield was down 10bps to 3.38% after the US Non Farm Payrolls (NFP) data release on Friday. NFP for August came in at 315k, higher than projections of 298k and July’s 526k. The unemployment rate was at a six-month high of 3.7%, higher than expectations of 3.5%.  Prior to the NFP release, markets were pricing in a 57% probability of a 75bp hike at the September FOMC meeting. That probability has now fallen to 54%. Markets are now pricing in a 46% probability of a 50bp hike, up from 39% a week earlier. The move in US equity markets after the data release was unenthusiastic – the S&P and Nasdaq closed 1.1% and 1.3% lower respectively. Sectoral losses were led by Communication Services, down 1.9% and Real Estate falling 1.7% while Energy rose 1.8%. US IG CDS spreads widened 1.5bp and US HY spreads were wider by 6.2bp.

In Europe, EU’s iTraxx Main CDS spreads were 6.7bp tighter and iTraxx Crossover spreads (Term of the Day, explained below) saw a sharp 30bp tightening. This risk-on move in European markets were also seen in equities led by the DAX which was up 3.3%. The CAC and FTSE also rose 2.2% and 1.9% respectively. Germany announced a €65bn relief package to help its households that are suffering from a crisis due to surging electricity and energy prices. Measures include a vow to cap and/or redistribute large profits made by energy companies; increased payments to pensioners, students, parents and the unemployed; and trying to limit the pace of soaring electricity prices.

In the LatAm region, Brazil’s Bovespa rose 0.4%. In the Middle East, UAE’s ADX was up 0.4% on Friday and Saudi TASI rose 0.4% on Sunday. Asia ex-Japan IG CDS spreads tightened 2.8bp on Friday. Asian markets have opened mixed today – Shanghai and Nikkei were flat, HSI was down 1.3%, while STI was up 0.3%.

The iTraxx Crossover Index is a credit default swap (CDS) based index compiled by IHS Markit (now part of S&P Global) which consists of the 75 most liquid sub-investment grade entities in Europe. The index helps track credit risk in the European high yield market, akin to the Markit HY CDS Index in the US. Performance is tracked in terms of the index’s value and the move in the spreads of the index. A tightening (a move lower) in its CDS spreads implies an easing of credit conditions in the European junk-bond markets which leads to an increase in the value of the index. On the other hand, a widening in its spread (a move higher) implies a worsening in credit conditions, which would lead to a fall in the index’s value. While the iTraxx Crossover Index helps track European high yield spreads, the iTraxx Main index helps track European investment grade spreads. The iTraxx Main index consists of 125 of the most liquid European entities with IG-ratings as published by Markit from time to time.

Greg Wilensky, head of US fixed income at Janus Henderson

“I’m in the 4% to 4.25% camp on the terminal rate. People are realizing that the Fed won’t pause on softer economic data unless inflation weakens dramatically… The worst is over as the market is doing a more reasonable job of pricing in where rates should be. But the big question is what is going on with inflation?”

I don’t think that’ll be the case here… When you look at the job openings in America right now, I think we’re going to be consistently strong. The Fed’s going to be very careful on what they’re doing. I think they’re taking a very consistent, unique approach to what’s happening here.”

“The ECB is walking a very, very fine line. The Fed has to slow the economy in order to get inflation down. I think the job of the ECB is much more complex because obviously there’s not much they can do against an energy crisis… There’s a short window for the ECB to hike”

“German manufacturers are already shutting up shop because of the high costs… For the ECB, this big conflict between tackling higher and higher inflation in the face of an inevitable recession is very difficult.”

Holger Schmieding, an economist at Berenberg

“What for instance the EU decides now about unlocking electricity prices, natural gas prices, will probably have a much bigger impact on inflation in the next six months. Interest rates do matter. In normal times they matter a lot, but at the moment they are not quite the key thing.” 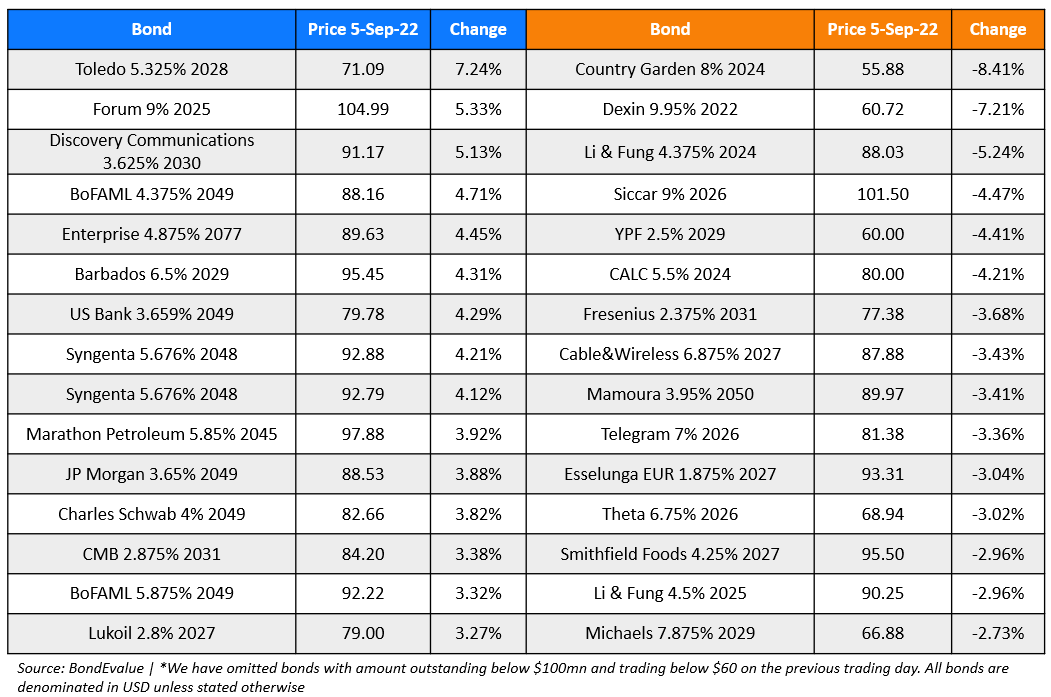