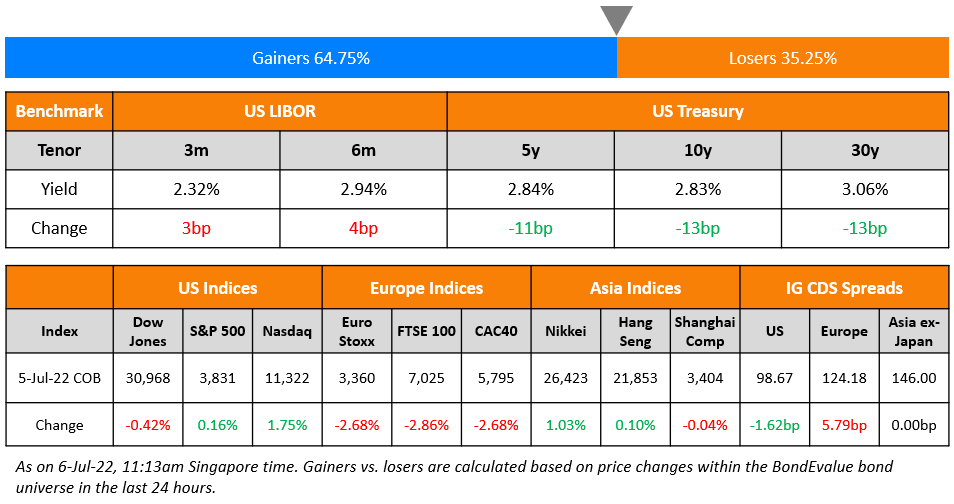 US equity markets were higher on Tuesday with the S&P and Nasdaq up 0.2% and 1.8% respectively. Sectoral gains were led by Communication Services up 2.7% followed by Consumer Discretionary up 1.6% while Energy down 4%. US 10Y Treasury yields continued its decline, falling by 13bp to 2.83%. European markets ended sharply lower on recession fears with the DAX, CAC and FTSE down 2.7-2.9%. Brazil’s Bovespa fell 0.3%. In the Middle East, UAE’s ADX and Saudi TASI were 0.4% and 0.1% lower respectively. Following the west, Asian markets have opened lower – Shanghai, HSI and Nikkei were down 1.3%, 1.5% and 1.3% respectively while STI was flat. US IG CDS spreads tightened 1.6bp and US HY spreads were tighter by 12bp. EU Main CDS spreads were 5.8bp wider and Crossover spreads were wider by 27bp. Asia ex-Japan IG CDS spreads were flat.

Russia’s services sector PMI came in higher at 51.7 in June from 48.5 in the previous month, led by a strong recovery in domestic demand. The Services PMI expanded for the first time since February when the began.

A Special Purpose Entity (SPE) aka Special Purpose Vehicle (SPV) is a separate legal entity with its own assets and liabilities created by the parent organization. SPVs are typically setup for a specific purpose such as issuing debt or transferring assets. SPVs can be in the form of limited partnerships, trusts, corporations or limited liability companies. Some benefits of setting up SPVs include:

On US Recession Chances Surging to 38%

“The odds of a US recession in the next year are now roughly one-in-three after consumer sentiment hit a record low and interest rates surged…The risk of a self-fulfilling recession—and one that can happen as soon as early next year—is higher than before…Even though household and business balance sheets are strong, worries about the future could cause consumers to pull back, which in turn would lead businesses to hire and invest less.”

“I wouldn’t expect the effect of the unwind, of QT (quantitative tightening), to have a material impact on the economy. So far our experience with the beginning of the shrinking of the portfolio is consistent with that”

“While a plan to raise revenue by 50 trillion pesos ($11.8 billion) with a tax reform is ambitious, the new government will try to get as close as it can to that target…There are immense social demands that requires significant additional social spending, while at the same time it is necessary to continue with the fiscal adjustment…It has to be a gradual adjustment…Colombia can’t reduce its revenue from oil exports in the short term if we are unable to increase non-oil exports.”

On Bond Volatility Soaring in Tug-of-War Between Recession, Fed Risks

“The grand question is how tolerant will Powell be in playing the Volcker role if the economy heads south…Until that is resolved, volatility stays high,”

“We are pretty stretched in terms of volatility and it’s hard to keep it that way once more supersized Fed hikes get delivered…This is the most ambiguous point of the business and rate-policy cycle.”

On a Truce in Ecuador Not Ending Pain in Bonds

“The concern is whether Lasso finishes his term…And if he doesn’t finish his term, then you have new elections and new elections could throw up a whole new set of candidates and we don’t know what their agenda is going to be.”

“The past weighs heavily on Ecuador…If they don’t break those perceptions, crises become a self-fulfilling prophecy.” 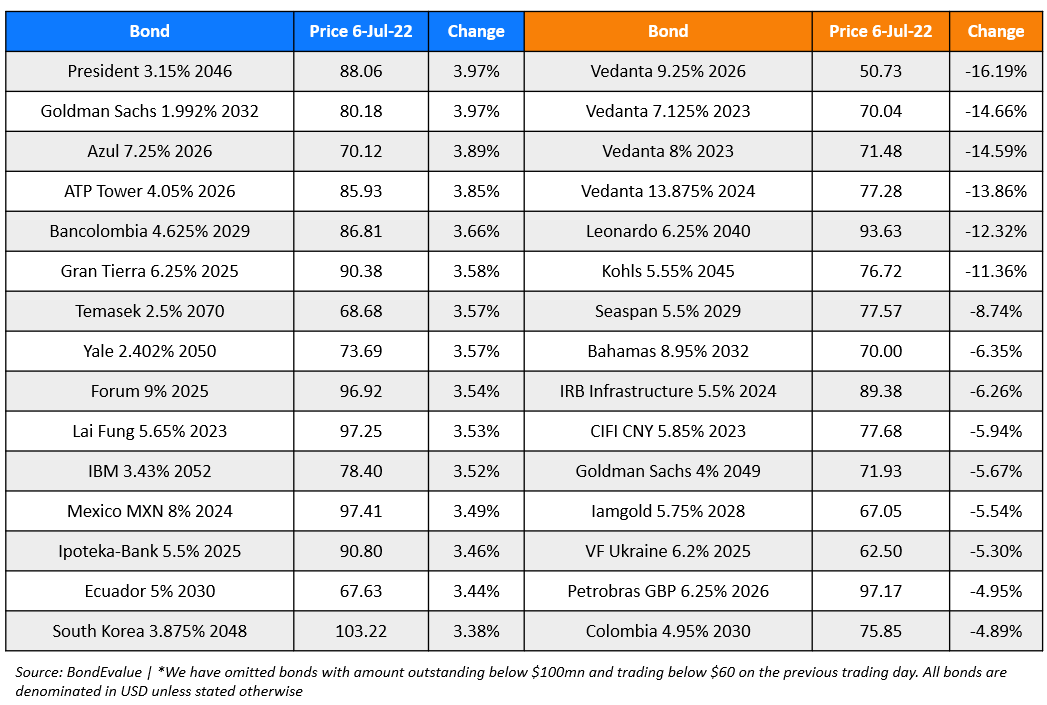