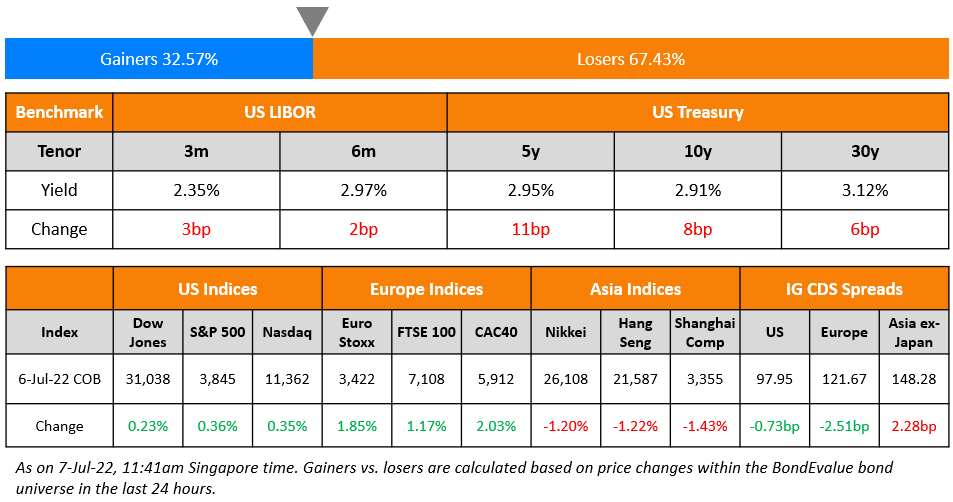 US equity markets ended slightly higher on Wednesday with the S&P and Nasdaq up 0.4% each. Sectoral gains were led by Utilities, up 1% and Information Technology, up 0.9% while Energy was down 1.7%. US 10Y Treasury yields were 8bp up at 2.91% on Fed minutes indicating a firm stance on further rate hikes (scroll down to the Talking Heads section). European markets were also higher with the DAX, CAC, and FTSE up 1.6%, 2% and 1.2%. Brazil’s Bovespa gained 0.4%. In the Middle East, UAE’s ADX fell 0.2% while Saudi TASI gained 0.6%. Asian markets have opened mixed – Shanghai, STI and Nikkei were up 0.5%, 0.2% and 0.7% respectively while HSI was down 0.5%. US IG CDS spreads tightened 0.7bp and US HY spreads were tighter by 6.1bp. EU Main CDS spreads were 2.5bp tighter and Crossover spreads were tighter by 10.2bp. Asia ex-Japan IG CDS spreads widened 2.3bp. 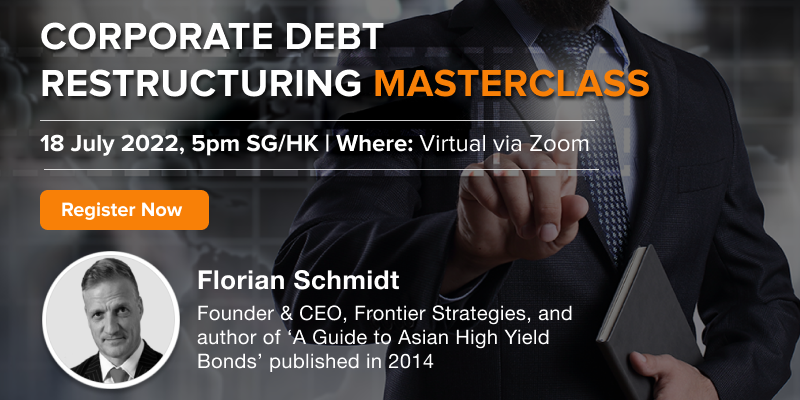 Learn about what to expect in a corporate debt restructuring in the upcoming masterclass, which will be conducted virtually via Zoom on 18 July 2022. The session will cover in-court vs. out-of-court restructurings, chapter 11, cross-border insolvencies with a focus on China, and case studies on recent restructurings including a deep dive on the recent consent solicitation and schemes transacted by Chinese property developers including Guangzhou R&F Properties. Click on the banner above to sign up!

As the name suggests, this is the risk of bonds not getting called by the issuer. This is particularly significant in the case of far maturity bonds, Perpetual Bonds (Perps) and AT1s. While market participants often assume that Perps/AT1s will be called on their first call date, that is not always the case. There have been prominent cases in the past such as that of Santander and Deutsche Bank, which shocked the markets in 2019 and 2020 respectively when they did not call their AT1s on the first call date. More recently, Allianz decided to skip the call on its $1.5bn 3.875% Perp in February this year, which led to a ~4 point fall in its price. Investors must thus account for non-call risk when investing in such bonds.

“The outlook since our last update in April has darkened significantly… We are in very choppy waters… The risk has gone up so we cannot rule it [recession] out.”

On Global corporate debt to drop amid higher funding costs

“Economic growth may slow or go into reverse, but companies are starting from a very profitable position… A preference for using debt as a larger part of the finance mix means just one in six U.S. companies has net cash on its balance sheet, compared to almost one in three elsewhere in the world… Companies will weather the downturn and use cash flow to reduce borrowings further”

The index of common inflation expectations at the board has moved up after being pretty flat for a long time, so we’re watching that, and we’re thinking, ‘This is something we need to take seriously