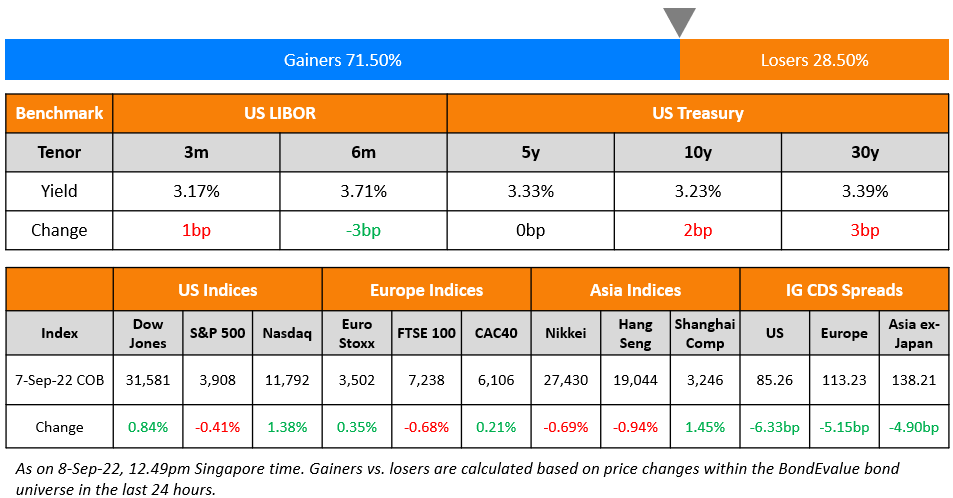 US 10Y Treasury yields were 2bp higher at 3.23% and 30Y yields were up 3bps to 3.39%. US IG CDS spreads tightened 6.3bp and US HY spreads were tighter by 28.6bp. US equity markets posted strong gains on Wednesday with the S&P and Nasdaq up by 1.8% and 2.1% respectively. Sectoral gains were led by Utilities and Consumer Discretionary up 3.1% each while Energy fell 1.2%. Oil prices fell to a 7-month low yesterday as US API inventories saw a sharp build-up. EU Main CDS spreads were 5.2bp tighter and Crossover spreads tightened by 14.2bp. Asia ex-Japan IG CDS spreads tightened 4.9bp. European markets were mixed – DAX was up 0.4%, CAC was flat and FTSE was down 0.9%. Germany will release a $12.9bn inflation relief package for its citizens and corporates in 2022, the finance ministry said. Brazil’s Bovespa was closed on account of its Independence Day. In the Middle East, UAE’s ADX rose 0.6% while Saudi TASI was down 1.1%. In Saudi Arabia, Q2 GDP rose by 12.2%, fastest pace since 2011, driven by oil activities rising 22.9% and non-oil activities rising 8.2%. Asian markets have opened broadly positive, up ~0.5%.

Separately, the Bank of Canada raised its benchmark rate by 75bp to 3.25%, delivering its fourth consecutive rate hike. It stated that due to its inflation outlook, further rate increases will be needed. 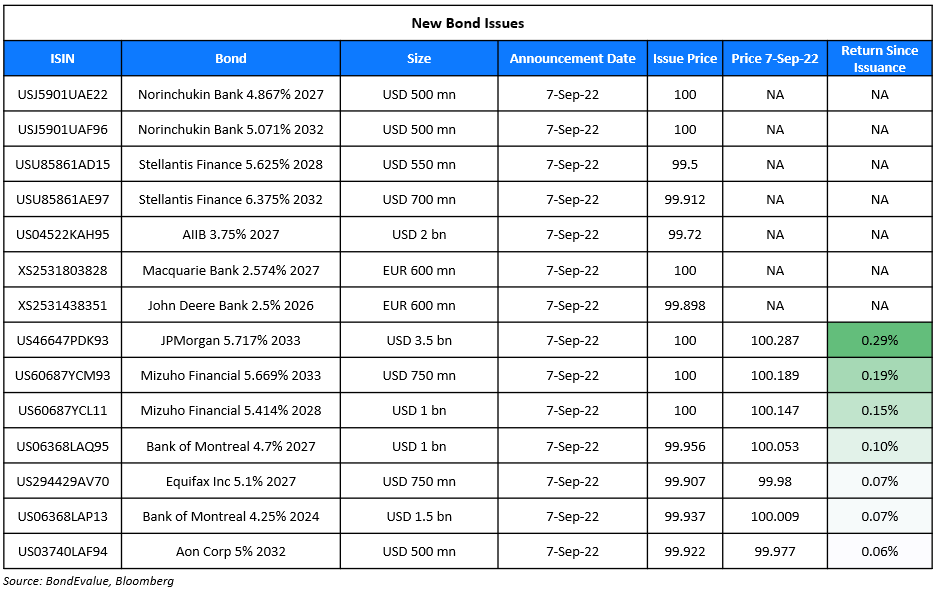 JP Morgan raised $3.5bn via a 11NC10 bond at a yield of 5.717%, 15bp inside the initial guidance of T+260bp area. The bonds are unrated. Proceeds will be used for general corporate purposes. Additionally, the bonds have 3-month par call and Make Whole Call (MWC) provisions.

Norinchukin Bank raised $1bn via a dual-trancher. It raised:

The bonds have expected ratings of A1/A (Moody’s/S&P).
Mizuho raised $1.75bn in a two-tranche deal. It raised:

The bonds have expected ratings of A1/A-. If the bonds are not redeemed on the optional redemption date of 13 Sept 2027 and 13 Sept 13 2032 respectively, the coupon resets to the 1Y US Treasury yield plus the initial spreads of 205bp and 240bp respectively. The bonds will be used to make loan that is intended to qualify as internal TLAC under Japanese TLAC standard to Mizuho Bank Ltd. Mizuho Bank intends to utilize such funds for general corporate purposes.

JBIC raised $1bn via a 3Y bond at a yield of %, 2bp inside initial guidance of MS+60bp area. The bonds have expected ratings of A1/A+, and received orders over $2.3bn, x issue size. The bonds are guaranteed by Japan.

Total Loss Absorbing Capacity (TLAC) is an international standard designed for banks, particularly Global Systemically Important Banks (G-SIBs) by the Financial Stability Board (FSB) in 2015 to ensure that these banks have ample equity and bail-in debt in place to minimize tax payer and government bailout mechanisms. Securities eligible under TLAC include common equity, subordinated debt, some senior debt and unsecured liabilities with a maturity greater than one year. FSB requires that 33% of TLAC be filled with debt securities and a maximum of 67% with equity.

“We are in this for as long as it takes to get inflation down… Monetary policy will need to be restrictive for some time to provide confidence that inflation is moving down to target… At some point in the tightening cycle, the risks will become more two-sided… it is important to avoid the risk of pulling back too soon”

“Continuing with interest-rate hikes while not signaling a move to stop the expansion of the ECB balance sheet is not a credible policy mix. The ECB Governing Council understands that they need to signal a credible monetary policy response to the euro-area inflation overshoot”

“Europe is going into a recession as a baseline scenario… Asset sales would be completely inconsistent with the view that re-investments are needed to help in case of fragmentation.”

“The local dynamics are much more important a driver than before” for Asian local-currency bonds. We are generally quite comfortable with extending duration on weakness in markets that have lower sensitivity to US Treasuries 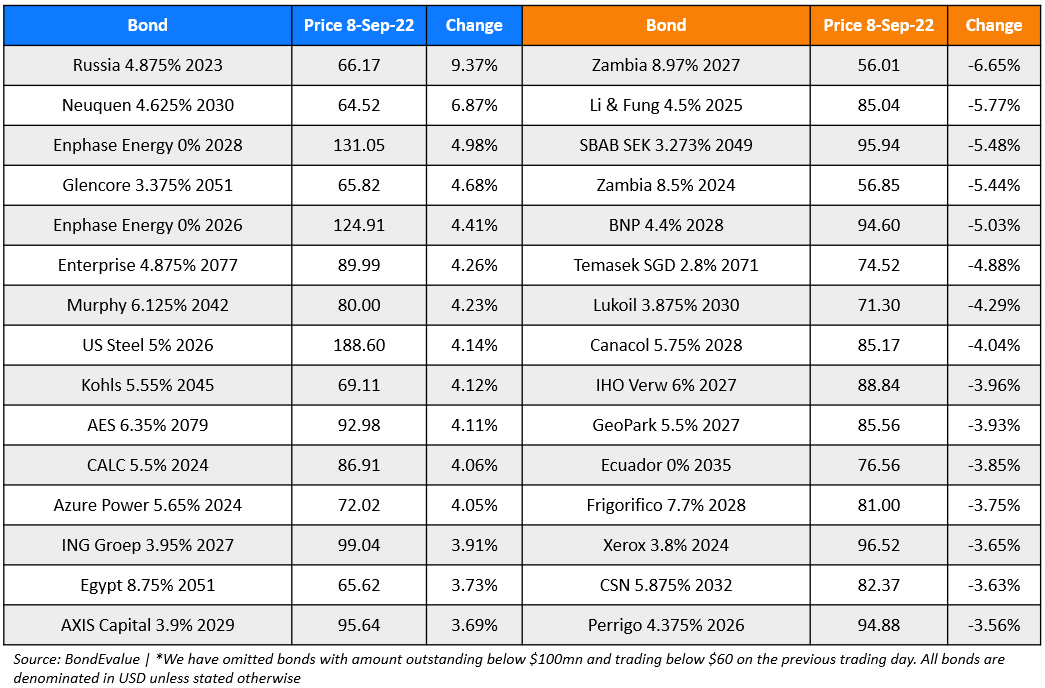