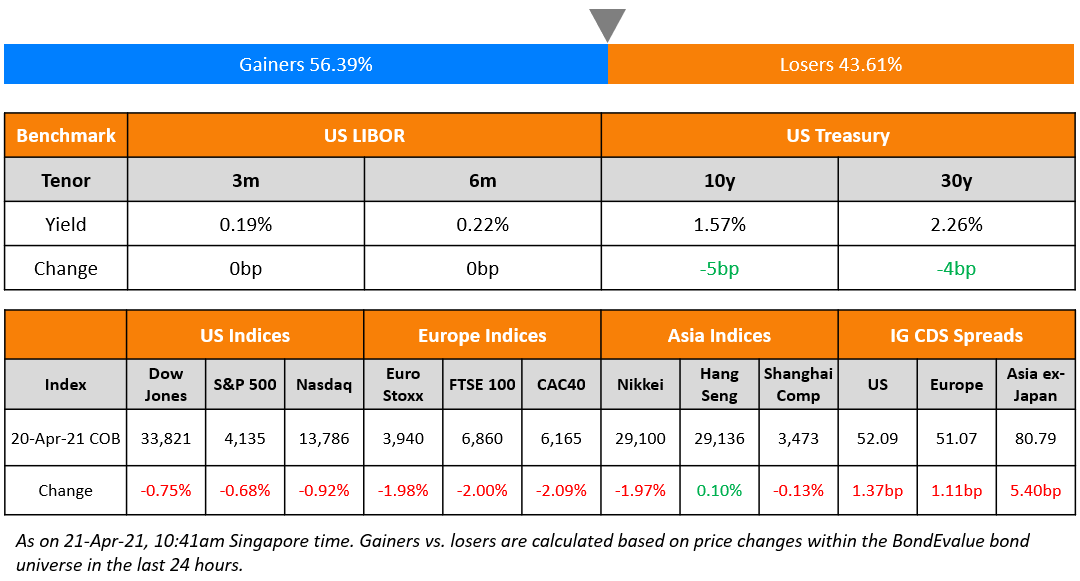 S&P fell 0.7% and Nasdaq was down 0.9% as equities continued to fall for a second day. Netflix shares were down 9% after-market after reporting a slowdown in subscribers. US10Y Treasury yields fell 5bp to 1.57%. European equities fared worse with DAX down 1.6% while CAC and FTSE were down 2%. US IG CDS spreads were 1.4bp wider and HY was 6.4bp wider. EU main CDS spreads were 1.1bp wider and crossover spreads widened 6.2bp.  Asian equity markets are lower by 1% today after Wall Street’s losses yesterday and Asia ex-Japan CDS spreads have widened 5.4bp. It’s a busy day at the primary markets with six new dollar deals launched including Malaysia, Sino-Ocean and BOC.

New to the BEV App? BondEvalue will be conducting a complimentary session on Navigating The Bond Markets by Leveraging the BEV App today at 5pm SG/HK. This session is aimed at helping bond investors in tracking their investments using the BondEvalue App. 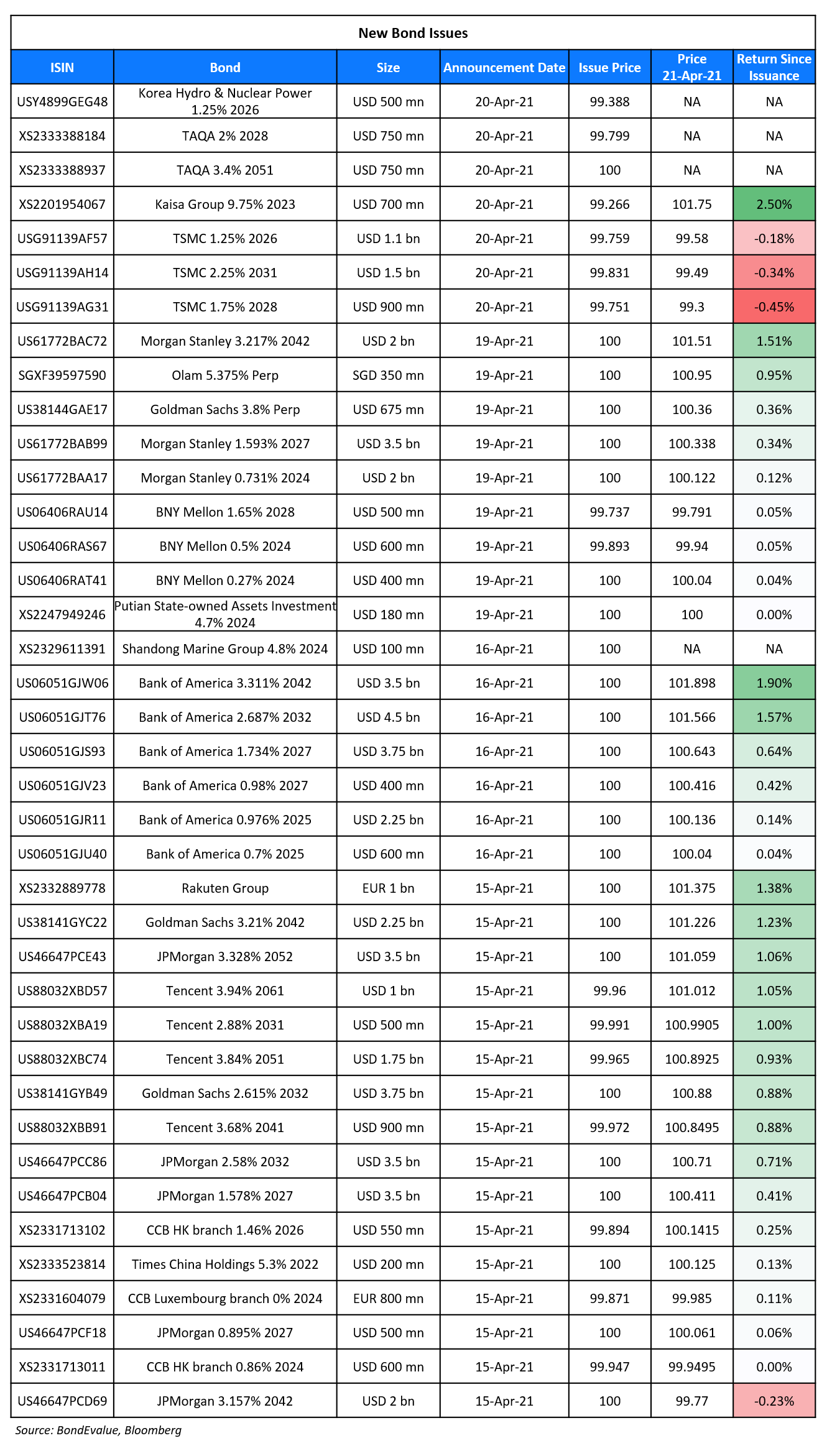 The bonds have expected ratings of Aa3/AA-. In March, TSMC said they planned to issue up to $4.5bn in dollar bonds this year.

Korea Hydro & Nuclear Power raised $500mn via a 5Y bond at a yield of 1.377%, 32.5bp inside initial guidance of T+90bp area. The bonds have expected ratings of Aa2/AA and received orders over $2.5bn, 5x issue size. The issuer is wholly owned by Korea Electric Power Corp (Kepco) and operates nuclear and hydroelectric power plants.

On distress still lurking despite drop in bankruptcies – Mark Kronfeld, BlackRock managing director
“Just because you’re not seeing bankruptcy filings doesn’t mean there isn’t distress,” said Kronfeld. “Companies, even with increased leverage, are able to get cheap financing,” but risks remain, he said.
On a $1 trillion liquidity surge morphing into a leverage boom
David Brown, co-head of global investment grade fixed income at Neuberger Berman
“Today’s liquidity becoming tomorrow’s leverage is going to be the story of 2021 for at least some companies,” said Brown.
Terence Wheat, senior portfolio manager of investment-grade corporate bonds at PGIM Fixed Income
“For many industries, this liquidity was supposed to be temporary,” said Wheat. “Now some companies may use it for acquisitions rather than paying down debt.”
Richard Hunter, global head of corporate ratings at Fitch Ratings
“Companies have chosen to lever up,” said Hunter. “The wild card is going to be companies’ choices now.”
Noel Hebert, director of credit research at Bloomberg Intelligence
“Ratings agencies have become comfortable with higher and higher leverage, thus companies are more and more happy to take advantage of it,” Hebert said. “There’s an incentive to hold leverage at elevated levels because there’s no real mechanism that’s punishing you.”
On the revival of bonds as buffer for market shocks
Eric Lonergan, a macro hedge fund manager at M&G Investments
“You don’t care about diversification when things are going right,” he said. “You care when something goes wrong. Right now I have a high degree of confidence that if that happens, Treasuries will do well. It’s insurance against anything . . . except much higher US inflation.”
Steven Major, chief bonds analyst at HSBC
“We should not underestimate how, in an increasingly interconnected global financial system, ‘stuff happens’,” wrote Major. “There is far too much leverage in the system, much of which may not be visible until something happens. And when these shocks come, money flows to the safest of safe havens, US government bonds invariably being the first choice.”
On investors shying away from bonds
Dave Nadig, chief investment officer and director of research at ETF Trends and ETF Database
When we talk to advisors, what we hear overwhelmingly is they don’t really want to own bonds at all right now if they can help it,” said Nadig. “If you look at what people are doing in their equity portfolios, it looks like the rotation we would normally expect into a risk-off trade is just missing that core Treasury allocation,” Nadig said. “Advisors tell me flat out they just don’t think they’re getting paid to take any risk, much less the duration risk baked into anything beyond the 2-year [Treasury rate] on the curve.”
John Hollyer, Vanguard’s global head of fixed income
“We look at high-quality corporate bonds, which I think do a good job diversifying a portfolio,” Hollyer said. “It’s not going to make or break a portfolio, but it is a good source of diversification and income.” “We really don’t see inflation emerging as a major threat, and we think the Fed will continue to demonstrate the patience they’ve shown so far before tapering or tightening,” he said. “We would say that a balanced portfolio with some holdings in bonds is going to achieve some better efficiency in light of potential for equity volatility.”
On traders sending down yields on lower stocks, global virus concerns – Brian Bethune, Tufts University economist
“There’s a repricing of what the international environment is going to look like,” even though the U.S. economic recovery looks strong, Bethune said. 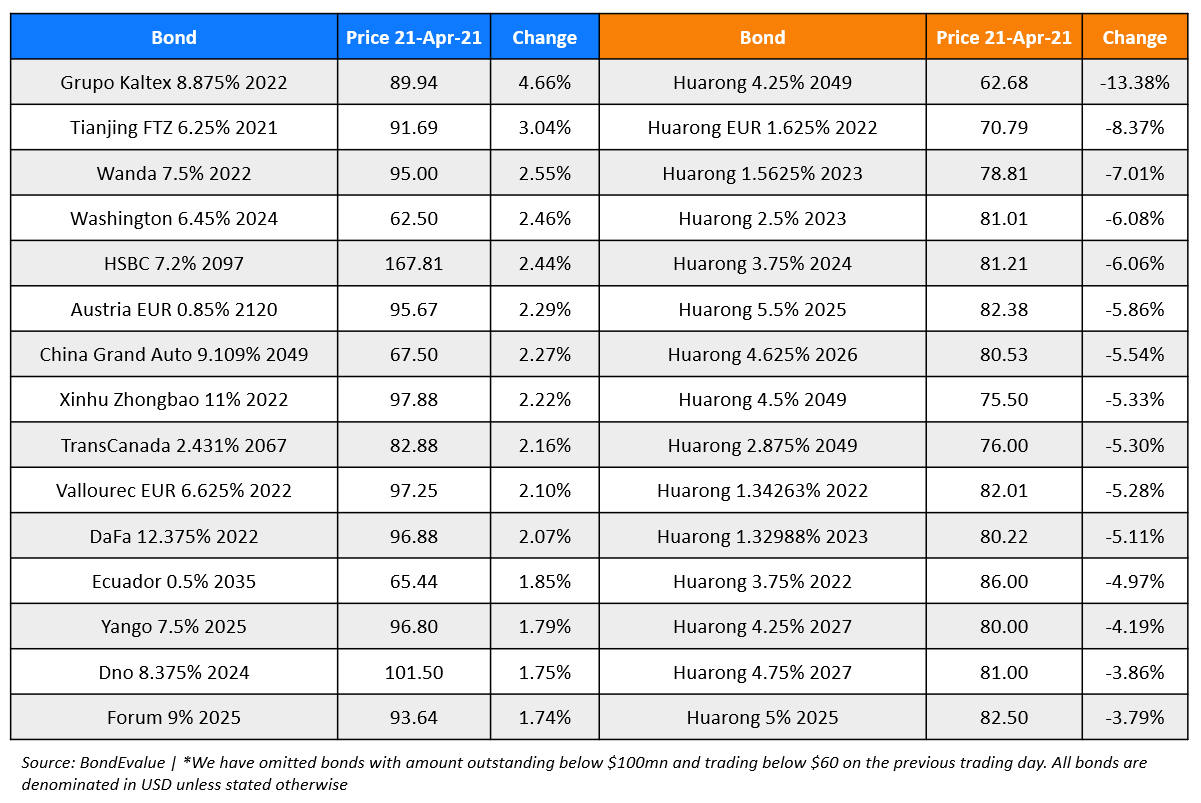