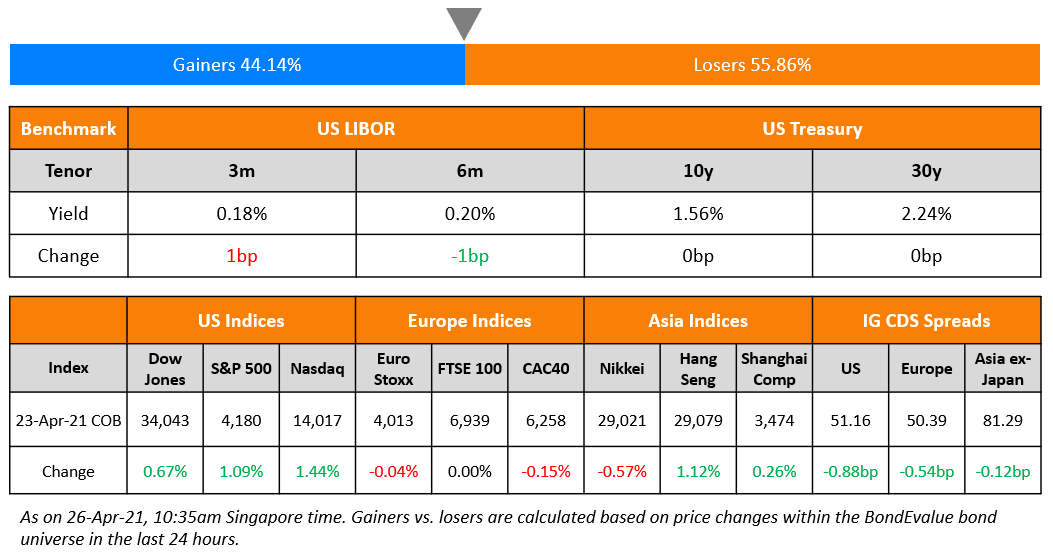 S&P and Nasdaq rallied 1.1% and 1.4% on Friday as equities recovered some its losses from earlier in the week. US Markit Flash Manufacturing PMI came in at 60.6, the highest since 2007. US 10Y Treasury yields were stable at 1.56%. This week sees popular names like Tesla, Apple, Google etc. report earnings besides the FOMC’s meeting on Wednesday European equities were weaker with the DAX and CAC down 0.3% and 0.2% respectively while FTSE was unchanged. US IG CDS spreads tightened 0.9bp while HY tightened 4.7bp. EU main CDS spreads were 0.5bp tighter and crossover spreads tightened 3.5bp.  Asian equity markets are up 0.7% today and Asia ex-Japan CDS spreads flattened 0.1bp. 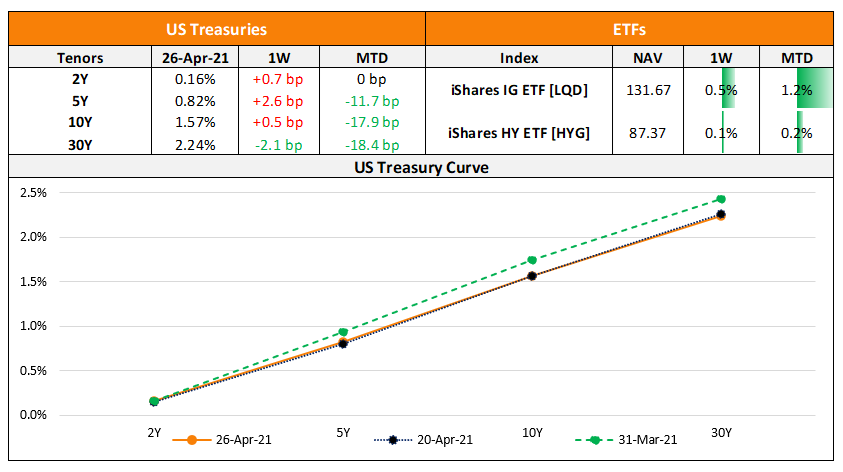 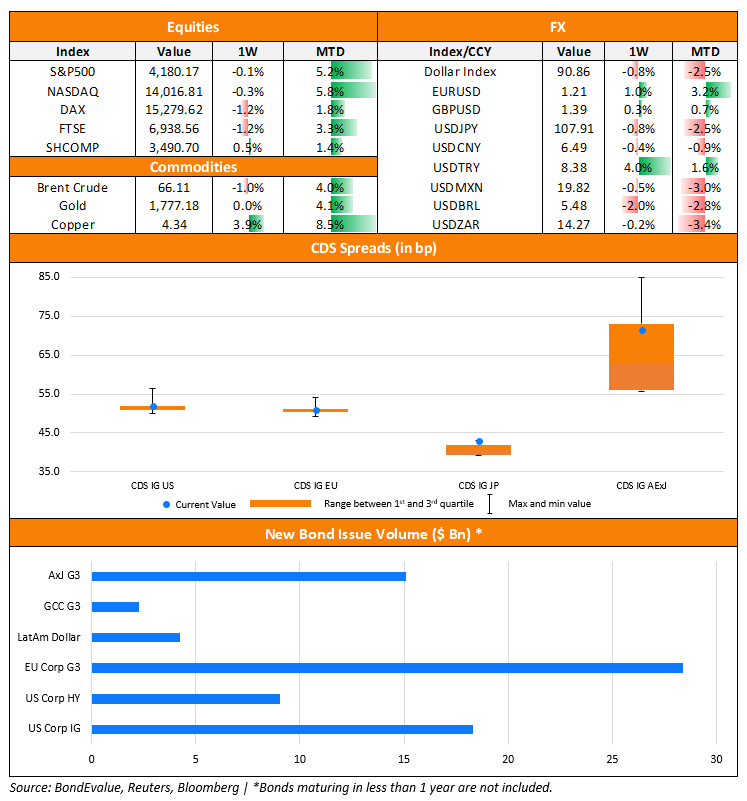 REIT or Real Estate Investment Trusts are companies that own or finance real estate assets that generate an income. These real estate companies have to meet several requirements to be eligible to be a REIT like paying 90% of their income to its holders. REITs often trade on stock exchanges, and they offer a number of benefits to investors. It allows investors to invest in a range of real estate portfolios without the hassles of managing actual real estate. Another benefit is that REITs allow smaller investors exposure to real estate without the requirement of a large investment sum, which is required for direct real estate investments.

On the variety of potentially market-moving events that investors will be looking out for this week
Michelle Meyer, Bank of America chief economist
“At the conclusion of the April FOMC meeting, we expect Chair Powell and the FOMC to give a more positive view of the economy but reiterate that the economy needs to make further progress before signaling any policy change and risks remain from the virus.” “The policy statement and the press conference are likely to emphasize that while the Fed is encouraged by the recent data, the recent acceleration in inflation should prove temporary and the labor market recovery is far from complete,” she added. “On asset purchases, we will look to see if Powell reiterates that it will be ‘some time’ before achieving ‘substantial further progress’ or changes the description of the path. We believe ‘some time’ is still appropriate, but there is a risk that he shifts.”
James Knightley, ING chief international economist
“With the economy opening up more and more each day, we are anticipating a series of 1 million-plus monthly payroll gains that could be enough for the Federal Reserve to call ‘substantial further progress’ and start the tapering process before the end of the year.”
Jim O’Sullivan, chief U.S. macro strategist at TD Securities
“We don’t expect any substantive new signal yet on tapering—or tightening—even as the tone on the economy is more positive than in March.” “We expect the signaling to evolve over time as the recovery proceeds, and we just changed out forecast for the start of tapering to March 2022 from September 2022, but we expect officials will be reluctant to say anything that could be construed as a tapering countdown signal until much later this year.”

On big oil companies finally generating spare cash, but investors not likely to get any

“They have limited appeal as long-term investments because they can’t demonstrate that they can deliver cash flow on a sustainable basis and return it on a sustainable basis,” said Malek. “The key is consistency. We haven’t had any.”
Will Hares, Bloomberg Intelligence analyst
“Priorities for deployment of Europe’s oil majors’ strong first-quarter free cash flow will vary,” said Hares. “BP has achieved its debt target and is set to announce resumption of buybacks. Shell has announced a small dividend bump, though is unlikely to resume buybacks given its $65 billion net debt target.”
Russ Mould, investment director at AJ Bell
The majors are “slaking the shareholders’ thirst for cash returns,” said Mould. In the long term “capex cuts, debt and disposals could do as much if not more harm than good, and none are really sustainable.”
On investors ploughing money into US inflation-protected bond funds
Collin Martin, a fixed-income strategist at Charles Schwab
“Inflation is the number one concern,” said Martin. “[Tips] are not going to give you great yield or return potential, but if you are worried about a significant upside surprise in inflation, there is really no better investment out there that can act as a hedge.”
Alexandra Lawson, a fixed income portfolio manager at Goldman Sachs Asset Management
“Transitory [inflation] can move markets,” said Lawson. “That in itself can lead to higher inflation expectations.” She added: “If you believe that inflation expectations lead to more permanent inflation, you can help offset that in Tips exposure.”
On the World Bank reassuring its support for Sri Lanka to recover better from COVID-19
Faris. H. Hadad-Zervos, the World Bank Country Director for Maldives, Nepal and Sri Lanka
“Sri Lanka’s economy is on the road to recovery after the worst downturn on record last year. The World Bank stands ready to support the Sri Lankan Government as it strives to protect its people from the pandemic, while addressing the vulnerabilities in the macro-fiscal environment.” “Recovery and resilience in the post-COVID era can be accelerated by an export-oriented growth model that taps the full potential of private investments and that increases competitiveness and growth.”
Chiyo Kanda, World Bank Country Manager for Maldives and Sri Lanka
“The in-depth discussions we have had with government officials, private sector and development partners will help us focus on the priority areas – critical for building a greener and more resilient economy that benefits all Sri Lankans,” said Kanda. “We explored many new, exciting avenues for collaboration including harnessing the power of digital technologies to provide more and better opportunities for all Sri Lankans.”
On Exxon investors warned of ‘existential’ risk from emission goals
In an investor presentation by hedge fund Engine No 1
“ExxonMobil still has no credible plan to protect value in an energy transition”. The company “touts its efforts in areas like carbon capture and biofuels,” but the efforts have “delivered more advertising than results”. “Arguing that reducing emissions intensity . . . while ExxonMobil continues to pursue production growth and thus increases overall emissions, puts it on a ‘Paris consistent’ path, fails the basic test of logic.” “The entire concept is reliant on the concept of a carbon tax, which has little chance of passage currently in the US, and would decimate oil and gas demand if it did.”
Thomas DiNapoli, New York State Comptroller
“Exxon’s board needs an overhaul,” said DiNapoli. “We continue to be deeply concerned about Exxon’s failure to manage climate risk and refusal to heed calls to transition to a lower carbon future.”
Darren Woods, chief executive of ExxonMobil
“What can we bring to those opportunities other than a cheque book?

“We expect the government will meet $2.0 billion-$2.5 billion of its annual borrowing needs with sukuk issuance, around half of which will likely be in the domestic market, supported by the growing share of Islamic banking assets.” “The declining share of sukuk in the funding mix reflects a general absence of international sukuk issuance, in part driven by investors’ preference for conventional bonds amid tighter global liquidity conditions, and the increase in Oman’s sovereign market risk premia following the sharp decline in oil prices during 2020,” Moody’s said. 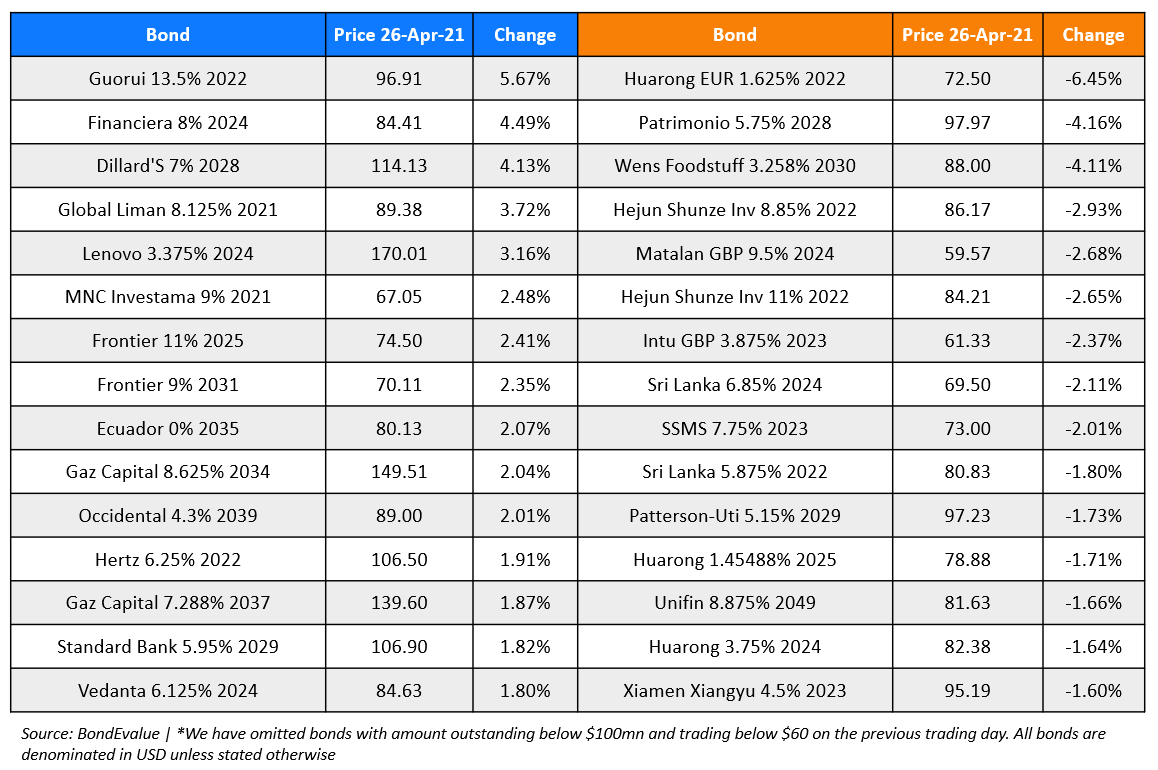