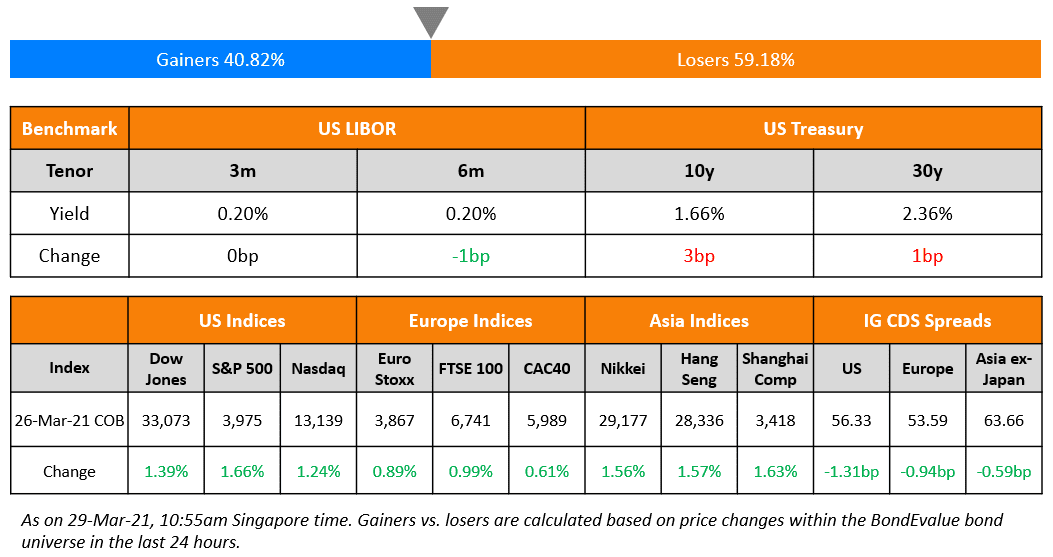 Friday saw the S&P advancing almost 1.7% and the Nasdaq up 1.2%. Financials rose 1.8% with the Fed saying it would lift restrictions on bank dividends and share buybacks in June. The US 10Y Treasury yield advanced 3bp to 1.66%. Oil and related stocks continued to rally with the pileup at the Suez Canal. European equities were also higher with the DAX, CAC and FTSE up 0.9%, 0.6% and 1% respectively. US IG CDS spreads were 1.3bp tighter and HY was 8bp tighter. EU main CDS spreads were 0.9bp tighter and crossover spreads tightened 8bp. Asian equity markets are off to a positive start, up over 0.4% and Asia ex-Japan CDS spreads are tighter 0.6bp. The primary markets are set for a busy week with four new dollar deals this morning and seven more new deals in the pipeline so far.
Bond Traders’ Masterclass 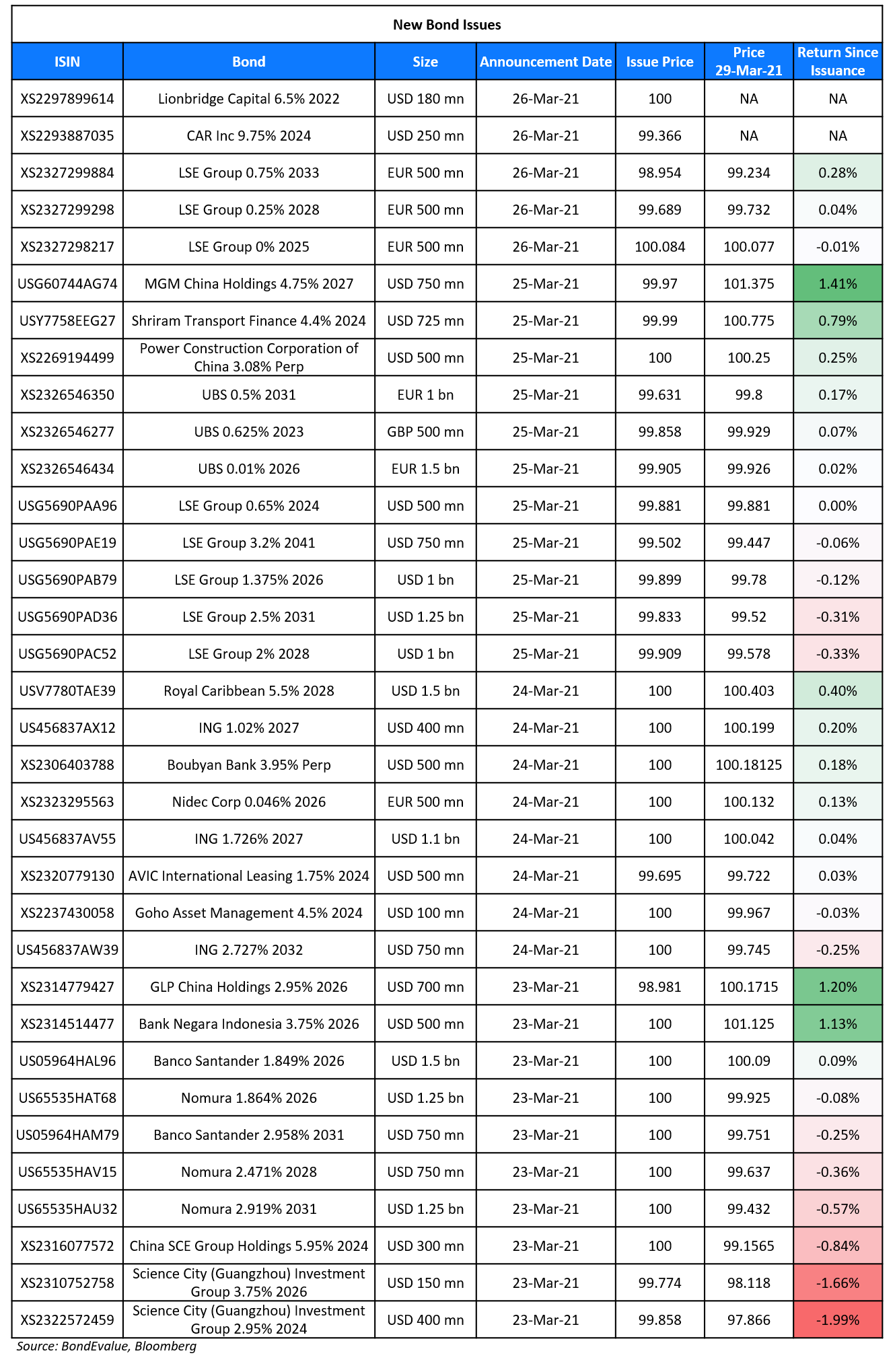 CAR Inc raised $250mn via a 3Y non-call 2Y (3NC2) senior bond at a yield of 10%, 25bp inside initial price guidance of 10.25% area. The bonds have expected ratings of Caa1/B- and received orders over $445mn, 1.8x issue size. S&P, which rates CAR at CCC+ said it could upgrade the issuer rating to B- if the issue is successful. Proceeds will be used to repay debt and for general corporate purposes.

Nomura cancelled a $3.25bn bond issuance on account of a potential loss of ~$2bn in its US subsidiary with a US client. The Japanese lender said that it would consider issuing the bond once the financial results of this are known. 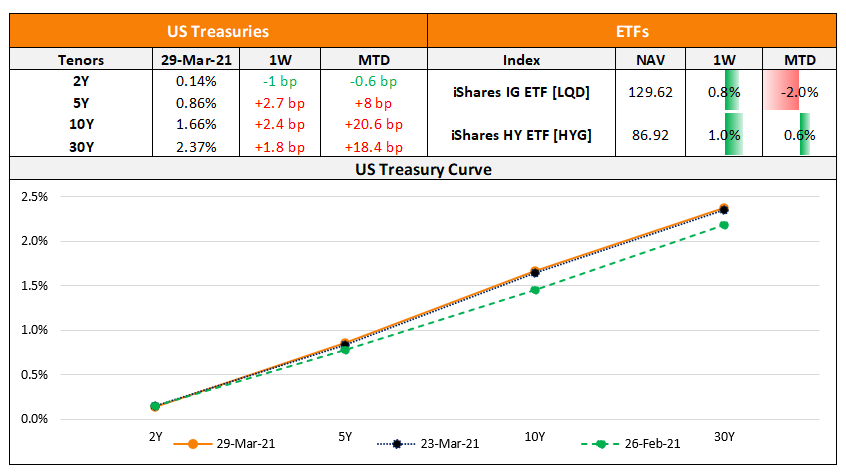 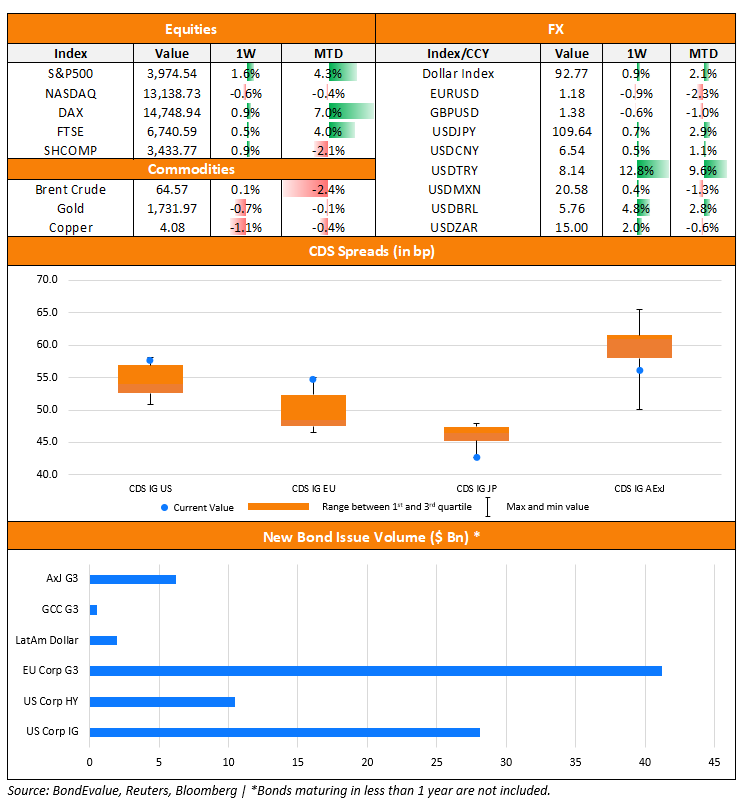 US primary market issuances rose to $41.8bn, up 27% vs. $33.1bn the week prior. The rise in issuance can be attributed mainly to IG deals at $28.1bn, up 38% WoW while HY fell 17% WoW to $10.5bn. The largest deal in the IG space was Oracle’s $15bn six-part issuance and in the HY space, cruise operator Royal Caribbean and NFE led the tables with a $1.5bn issue each. In North America, there were a total of 49 upgrades and 41 downgrades combined, across the three major rating agencies last week. LatAm saw $1.9bn of deals last week vs. a mere $178mn in the week prior led by Banco de Credito Peru raising $500mn and Trust Fibra Uno raising $300mn. EU Corporate G3 issuance saw an increase again last week to $41.2bn vs $32.3bn in the week prior – ING’s €5bn ($5.9bn) deal was the largest, followed by UBS’s combined $3.7bn dual currency offering (EUR and GBP) in three parts and Santander’s $2.25bn dual-trancher. GCC and Sukuk G3 issuances were at $1bn with Kuwait’s Boubyan bank and Doha Finance raising $500mn each in the week prior. APAC ex-Japan G3 issuances were relatively lower at $6.2bn vs $7.7bn in the prior week. Greenko’s $940mn was the largest deal – it was also the largest ESG deal yet from India. Other large deals were MGM’s $750mn 5.8NC2.8 bond and GLP China’s $700mn 5Y. In the Asia ex-Japan region, there were 6 upgrades and 6 downgrades combined, across the three major rating agencies last week.

On bubble deniers abound to dismiss valuation metrics one by one

Don Calcagni, chief investment officer of Mercer Advisors
“Every time markets hit new highs, every time markets get frothy, there are always some talking heads that argue: ‘It’s different,’” said Calcagni. “We just know from centuries of market history that that can’t happen in perpetuity. It’s just the delusion of crowds, people get excited. We want to believe.”
Jeff Schulze, investment strategist at ClearBridge Investments
“It’s looked extended really for the past decade, yet you’ve had one of the best bull markets in U.S. history,” he said. “That’s going to continue to be a metric that does not adequately capture the market’s potential.”
Peter Oppenheimer, chief global equity strategist at Goldman Sachs
“Today is a very different situation — I don’t think we’ve got a broad bubble,” , said Oppenheimer. “Given the level of real rates, where they are, it’s still likely to be broadly supportive for equities versus bonds.”
Ed Yardeni, founder of Yardeni Research Inc
“Valuation multiples are likely to remain elevated around current elevated levels because fiscal and monetary policies continue to flood the financial markets with so much free money,” said Yardeni.
On the threat of inflation risk to markets enjoying retail trading boom – Ken Griffin, founder of Citadel
“Given the incredible amount of stimulus that has been unleashed, there is a possibility we see a real surge in inflation,” Griffin said. “The question is whether it is transitory or becomes permanent and structural, and there is a much higher chance that it becomes entrenched than any other time over the past 12 years.”
“The fact that the tweet of an ice cream cone can move markets will be the subject of academic study for years,” Griffin said. “It represents a dynamic where certain stocks are now almost exclusively owned by retail and passive funds. You’ve taken out active investors who focus on traditional metrics in valuing an equity.”
On global bond markets weakening after tepid Treasury auction
According to ING analysts
“The weak seven-year auction is a timely reminder that the backdrop points to higher rates,” ING analysts said.
Sebastian Mackay, multi-asset fund manager at Invesco
“I think what’s interesting in Europe is the contrast between equity markets and health woes,” said Mackay. “We’re probably in a cyclical upswing for equities,” said Mackay. “The rise has been fuelled by the prospect of the reopening of the global economy, but valuations are already quite stretched.”
On the growing number of China LGFVs seen defaulting on their bonds in 2021 – according to a report by Chang Wei Liang, analyst at DBS
“One area where we expect more defaults to come through this year is in Chinese local government financing vehicles (LGFV) bonds. While LGFV bonds comprise under 10% of the offshore Chinese USD credit market, they have seen their credit spreads jump in stark contrast to the rest of the Asian market.” 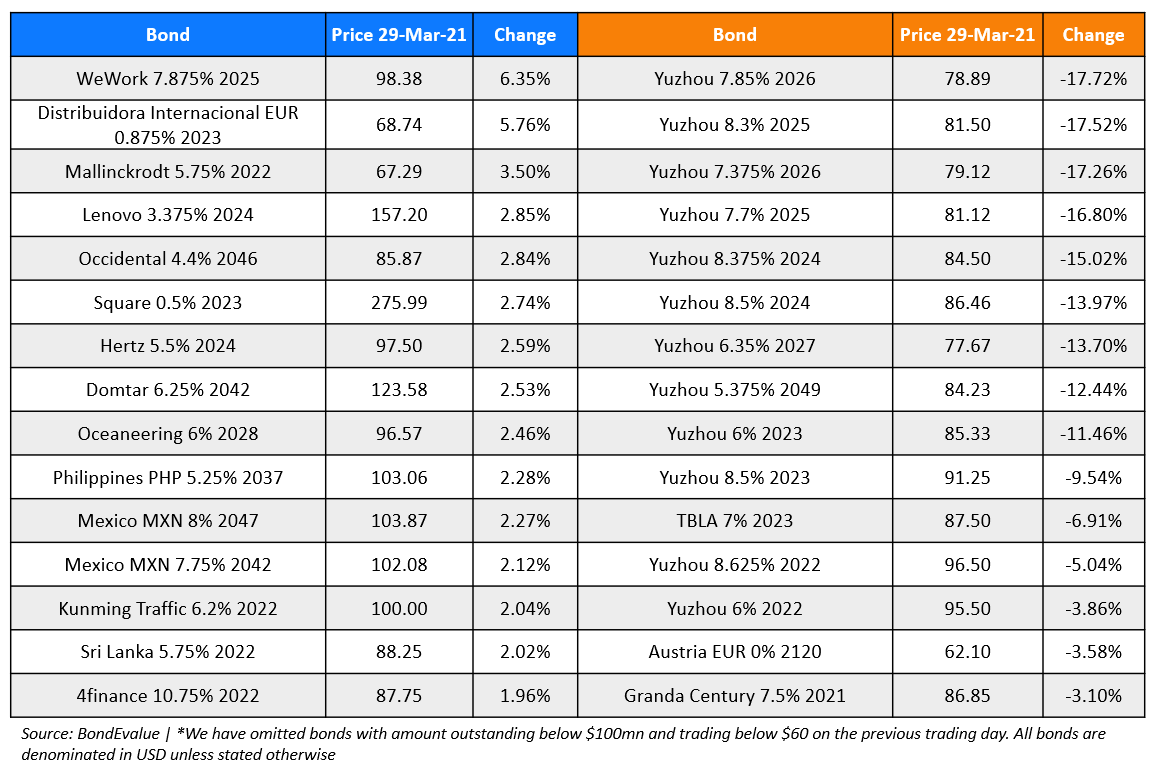