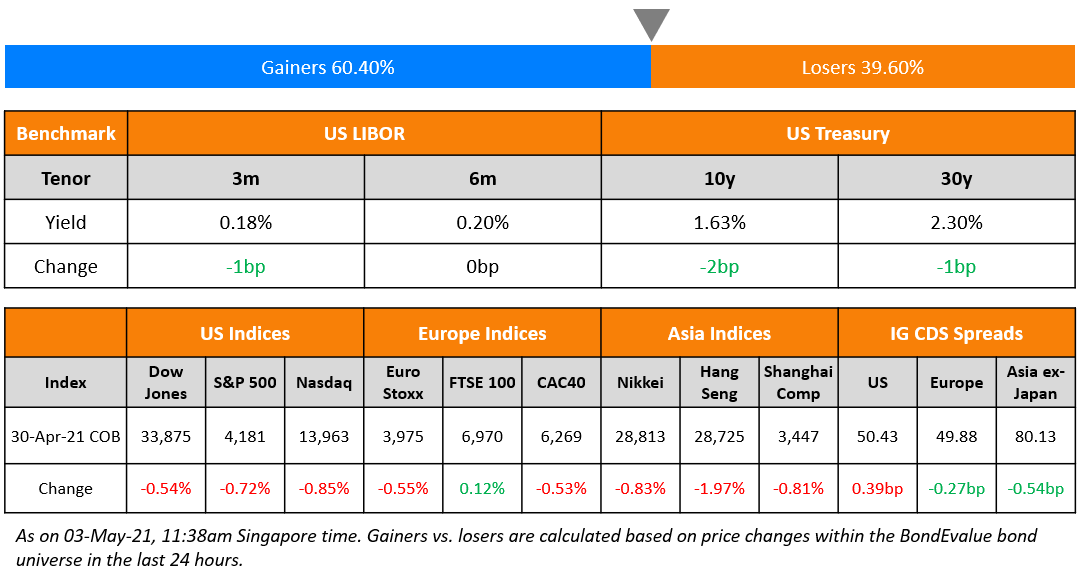 S&P fell 0.7% on Friday to reverse the prior day’s gains while Nasdaq was 0.9% lower. US 10Y Treasury yields pushed lower to 1.63%. European equities were also lower with the DAX and CAC down 0.1% and 0.5% while FTSE was 0.1% higher. FT reports that a double-dip recession has emerged in the Eurozone after Germany’s GDP printed a quarterly contraction of 1.7% alongside Spain, Italy and Portugal contracting 0.5%, 0.4% and 3.3% respectively; France was a ray of hope growing by 0.4%. US IG CDS spreads were 0.4bp wider and HY widened 2.3bp. EU main CDS spreads were 0.3bp tighter and crossover spreads tightened 0.6bp. Asian equity markets are trading lower by 0.3% today and Asia ex-Japan CDS spreads were 0.5bp tighter. 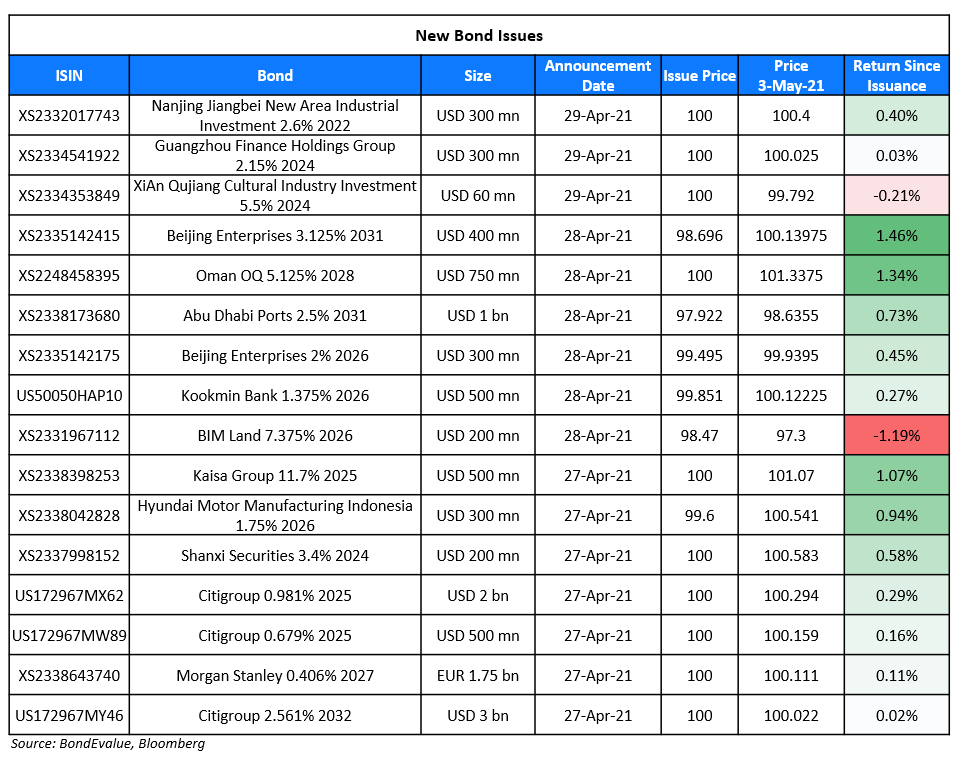 IG performed much better than the prior two months as US Treasury yields eased in April after the 10Y yield rose a massive ~67bp in February and March. An exception to this was China Huarong’s dollar bonds that went through high bouts of uncertainty over its financial position leading to a sharp selloff in its bonds, causing the long tail in the box and whisker plot below. 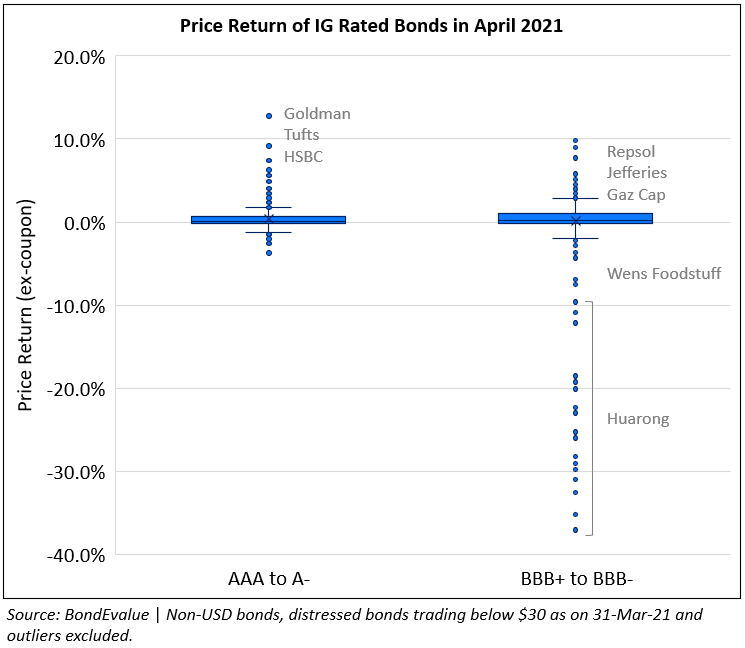 In the HY space, Ecuador’s bonds saw a big jump after a positive presidential election result. On the other hand, a long negative tail was observed in the bonds of Mexico’s AlphaCredit, Huarong’s Perps and Credito Real. 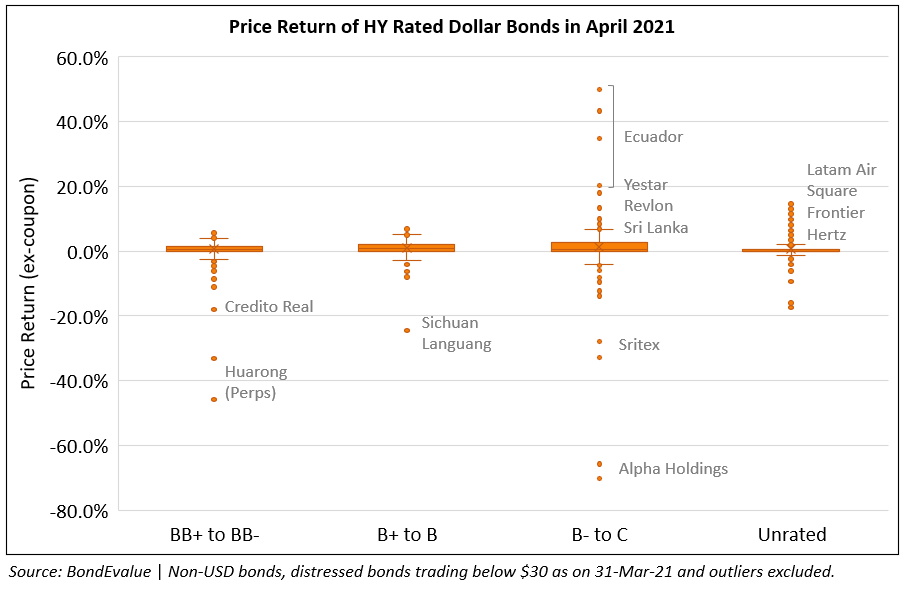 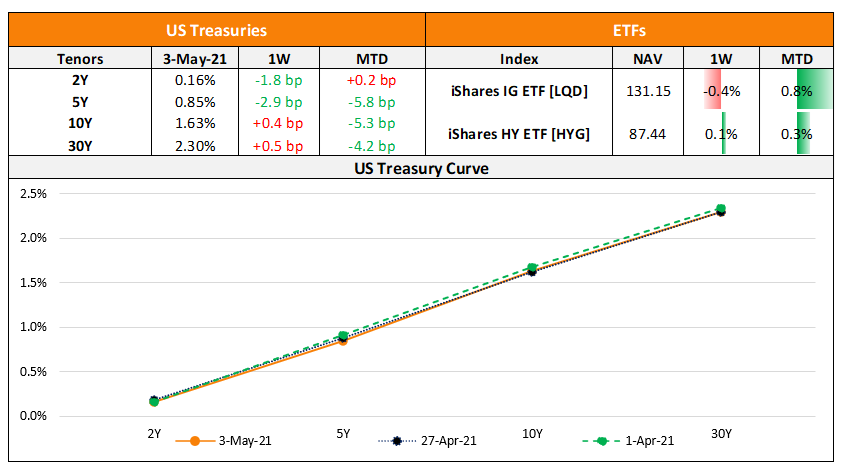 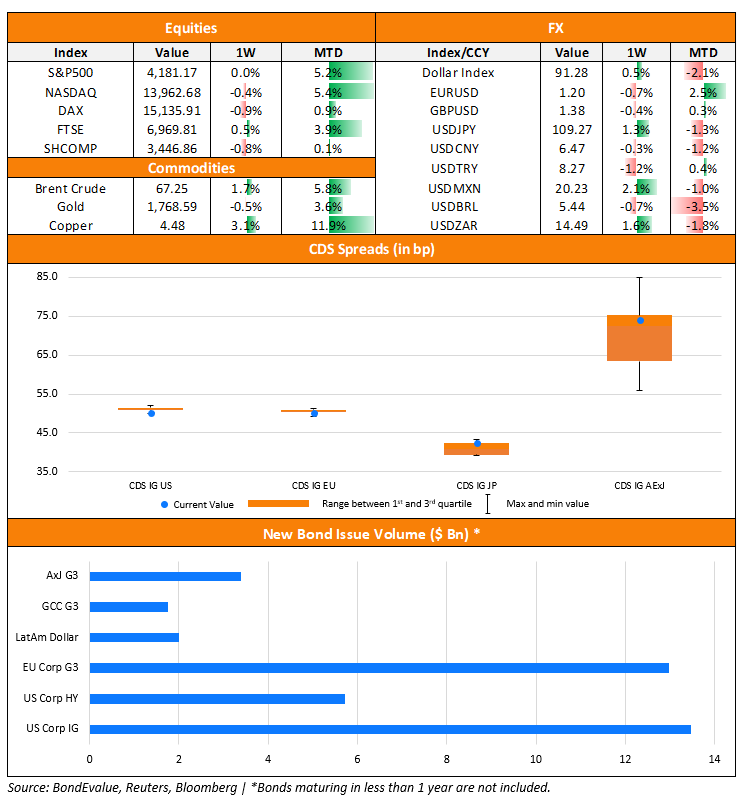 On the bond market’s inflation bulls getting green light from Powell to double down
Jerome Powell, Federal Reserve Chairman
“We want it to average 2%,” Powell said. “And for that we need to see inflation expectations that are consistent with that, really well-anchored at 2%. We don’t really see that yet.”
Craig Brothers, senior portfolio manager and co-head of fixed income at Bel Air Investment Advisors
“It’s sort of like the perfect storm” with “the economy getting every benefit possible as the Fed is standing aside and Washington is helping as much as they can,” he said. “What I worry about regarding inflation is that the main areas many people feel, which is in food, energy and shelter, are all going up at a very strong rate.”
On Kaplan wanting to talk taper, breaking rank with Powell
Robert Kaplan, Dallas Federal Reserve president
“We’re now at a point where I’m observing excesses and imbalances in financial markets,” said Kaplan. “I’m very attentive to that, and that’s why I do think at the earliest opportunity I think will be appropriate for us to start talking about adjusting those purchases.” “I think we’re going to reach that benchmark sooner than I would have expected in January and others would have expected,” he said. “I think the U.S. economy will be far healthier when we have the ability to start weaning off those purchases.” “We’ve got real excesses in the housing market,” Kaplan said. “It’s not yet the speculative situation that we had back in ‘07, ‘08 and ‘09, but I think it bears watching and keeping a close eye on.”
Brett Ryan, senior US economist at Deutsche Bank AG
”It’s not surprising that Kaplan is making a case now for tapering because he’s already been making the case,” said Ryan. “The surprising thing is that it’s so soon right after Chair Powell had been very explicit in saying now is not the time to talk about tapering. That’s the dichotomy there.”
On higher taxes necessary to contain deficit
Janet Yellen, US Treasury Secretary
“I think we’re in a good fiscal position. Interest rates are historically low. They’ve been that way for a long time, and it’s likely they’ll stay that way into the future. But we do need fiscal space to be able to address emergencies, like the one that we’ve been in with respect to the pandemic,” Yellen said. “We don’t want to use up all of that fiscal space and over the long run, deficits need to be contained to keep our federal finances on a sustainable basis. So, I believe that we should pay for these historic investments,” she said. “We will monitor that very carefully,” she said. “We are proposing that the spending be paid for. And I don’t believe that inflation will be an issue, but if it becomes an issue, we have tools to address it. These are historic investments that we need to make our economy productive and fair.”
Rob Portman, the Ohio Republican senator
“There are ways to get there,” Portman said. “We’ve got some phone calls scheduled this week. I met with the White House late last week. There’s a way forward here if the White House is willing to work with us.”
Ron Klain, the White House chief of staff
“We have time to talk to people in both parties, find where the common ground is, find what people agree as mutually shared interests. I’m optimistic that we can make progress on that in the weeks ahead,” he said. 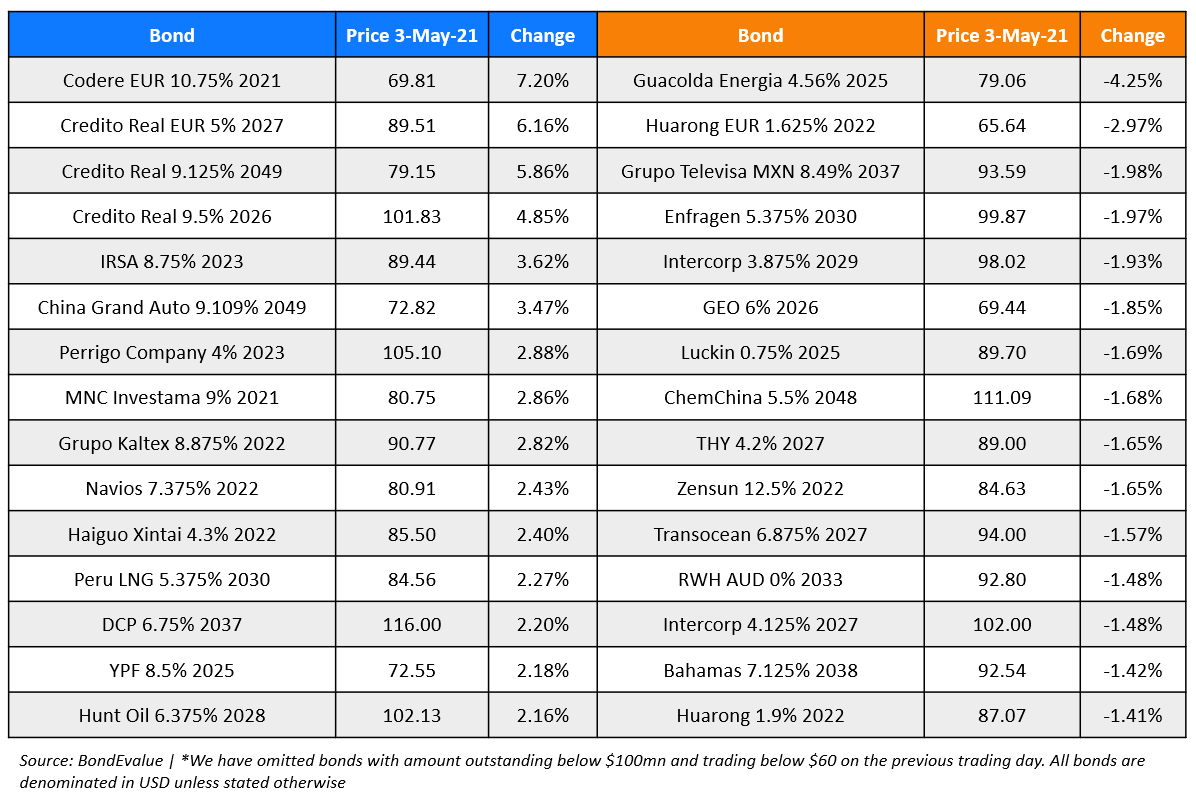