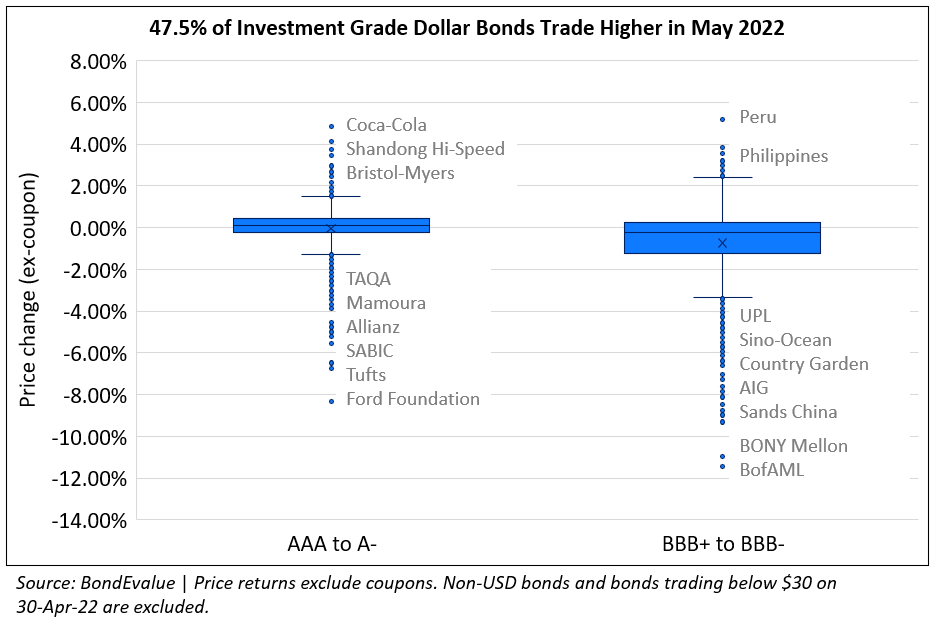 Dollar bonds saw their best performance yet in 2022, with a relief rally across many bonds. 41% of dollar bonds in our universe saw positive price returns ex-coupon, the best performance since December 2021 when 44% of bonds ended higher. This year has had a dismal start with less than 10% of dollar bonds in the green in each of the prior four months. The beginning of May had a similar tone to prior months where bonds sold-off due to the overall rise in US Treasury yields and rate hike expectations picking up. During the first half of May, 10Y Treasury yields jumped 27bp to a high of 3.20%. However, equity markets across the globe and the US in particular led an overall risk-off sentiment. At its worst point during the month, the S&P was down ~10% from its highs. Stock markets witnessed several bouts of volatility, with the 10Y Treasury ultimately cooling-off by 38bp from its highs to 2.84% at the end of the month. The move lower in Treasury yields provided a tailwind for investment grade bonds to move higher and outperform high yield bonds. As the chart below indicates, 47% of investment grade (IG) bonds were in the green vs. 31% of high yield (HY) bonds that ended higher. 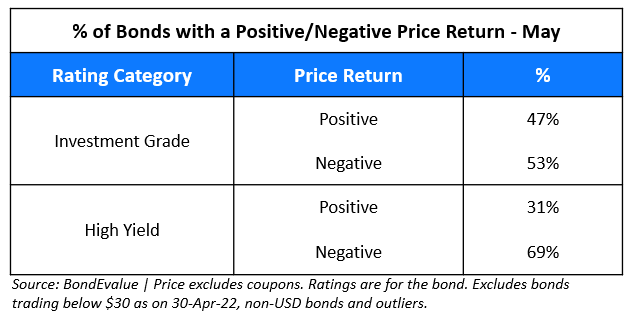 In the Investment Grade space, while 47% of the dollar bonds ended higher, the gains were marginal as seen in the box & whisker chart above. The biggest price drops were observed in perpetual bonds of two of America’s big banks, BofA and BONY Mellon. While there was no specific news regarding their bonds, Perps tend to have trading characteristics like stocks in a risk-off environment. The broad sell-off in equities was inline with the “sell in May and go away” sentiment, which impacted bond prices as well. Other losers included UPL, which was downgraded to BB+ by S&P, and Country Garden and Sino-Ocean, whose bonds fell 5-7% as China’s property sector worries slowly seeped into investment grade-rated developers.

In the High Yield space, 69% of dollar bonds were in the red in May. Among the gainers were near-term bonds of Agile Group that rose over 15% on repayments of its outstanding loans, inducing some positive sentiment. Other gainers included select oil companies like Lukoil, Gazprom, Talen Energy, Kondor etc. on the back of a 20% rally in Brent crude during the month. The losers list comprised companies like Unifin Financiera that fell ~30% on reports that the company was yet to follow-up on plans to boost its liquidity. The usual suspects in the China property space also filled the losers list. Jinke’s bonds fell ~40% after it called for a 1Y extension of its bonds. Among the popular names, Greenland Holding’s bonds fell over 60% after a liquidity scare where it proposed extending its $488mn 6.75% dollar bond due June 25 by a year. Others like Times China, KWG, Central China Real Estate, Shimao etc. also dropped during the month. Scroll lower to the “Gainers & Losers” section for further details. 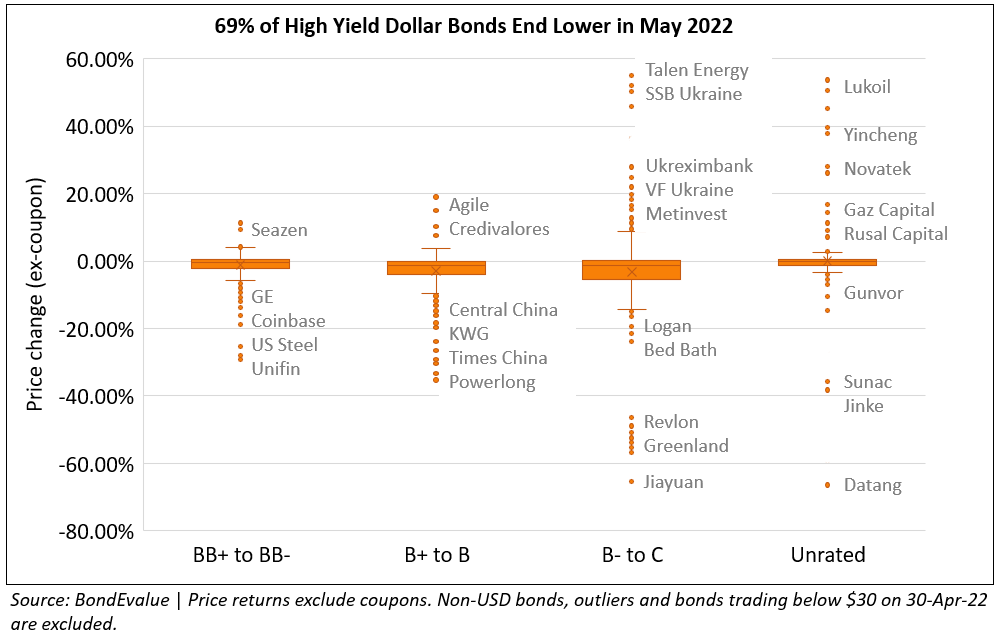 Global corporate dollar bond issuances were slow, given the overall volatility in financial markets. New bond issuance volumes stood at $132.2bn, down 29% MoM and 50% lower YoY. With treasury yields soaring higher, only 3% of the issuances came from the high yield space while 95% of the issuances came from the investment grade space. The balance 2% were unrated deals. The last week of the month saw only $700mn in US bond deals, the lowest weekly issuance from the region yet in 2022. 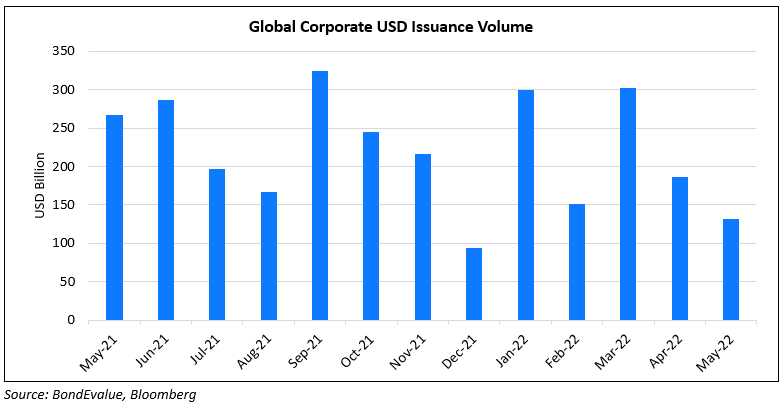 APAC ex-Japan & Middle East G3 issuance stood at $15.85bn, down 28% MoM and 54% YoY. Investment grade issuances dropped 21% MoM to $14.25bn while high yield dropped almost three-quarters to a mere $707mn. The region saw the lowest monthly issuance volumes since December 2021 where volumes were only at $3.5bn. Similar to the prior months, issuance volumes were low due to sharp bouts of volatility during the month, arising out of the Russia-Ukraine war, the rapid increase in interest rates and the hawkish outlook by central bankers towards hiking rates.

The largest deal in May 2022 was by Intercontinental Exchange (ICE Group), raising $8bn via a six-tranche deal, followed by Citigroup’s $6bn four-tranche deal. Other large deals were by France’s CADES raising $3.5bn and UnitedHealth’s two-tranche $3.5bn issuance, Commonwealth Bank of Australia’s (CBA) $1.7bn deal and sovereigns from the APAC and Middle East region. 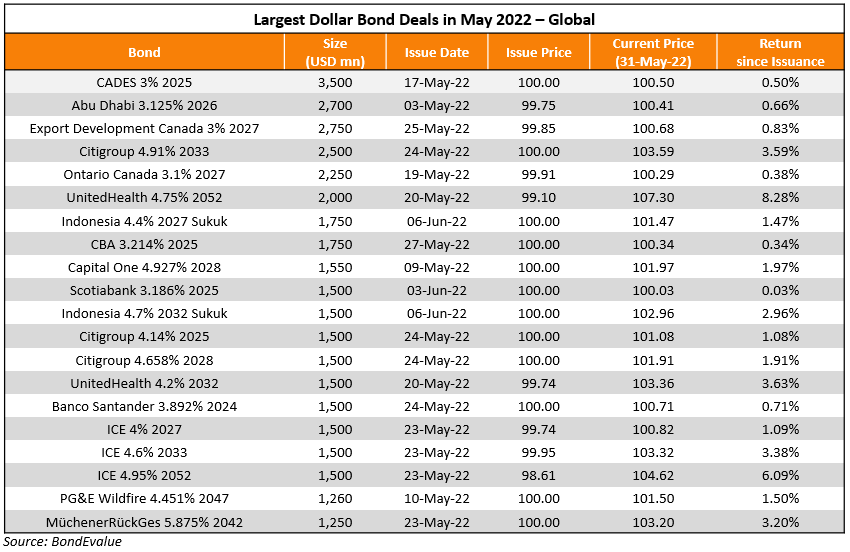 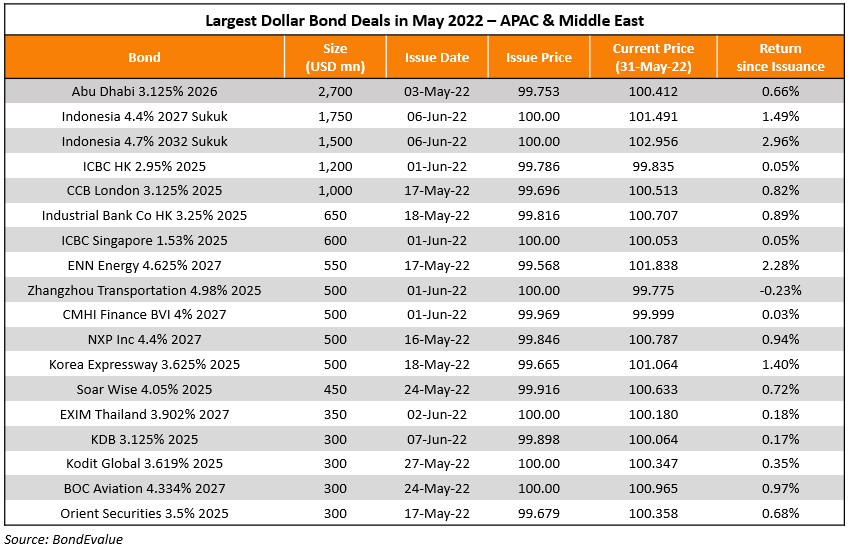 The top gainers in May were led by select oil companies like Talen Energy, Lukoil, Kondor and Gazprom with oil prices rallying over 15% with Brent touching $120/bbl more recently. Other gainers included the Ukrainian sovereign and corporates that also inched higher. Agile Group’s dollar bonds due 2022 rose ~28% on repayments of its outstanding loans which were reported to have eased its cash flow mismatch. Greenland Hong Kong’s 9.625% dollar bonds due June 2022 also increased with the company repurchasing $18.5mn in the principal amount of its bonds.

Among the top losers in the month of May were dollar bonds of Chinese developers Datang Group and Greenland Holding. Datang said that it was under liquidity pressure and came out with an exchange offer for its $300mn 12.5% 2022s to avoid a default. Investors have exchanged nearly 95% of Datang’s bond for a new 12.5% note due in 2023, but the company said that it may not be enough to avoid default. Datang indicated that it does not expect to be able to make timely repayments on the remaining $16.05mn notes. Among the large developers, Greenland’s dollar bonds due 2022 in particular, fell as much as 60%. First, the developer was downgraded by S&P to B- from B+ on deteriorating liquidity and cash depletion for debt repayment. Later, Bloomberg reported that the developer was proposing an extension of its $488mn 6.75% dollar bond due June 25 by a year, causing a scare and also hurting peers like Powerlong, Sunac, Shimao, KWG etc. Also, Jiayuan was downgraded to C from B by Fitch, on missing interest payment due on April 30. The company now has a 30-day grace period for making the payment before default event triggers. 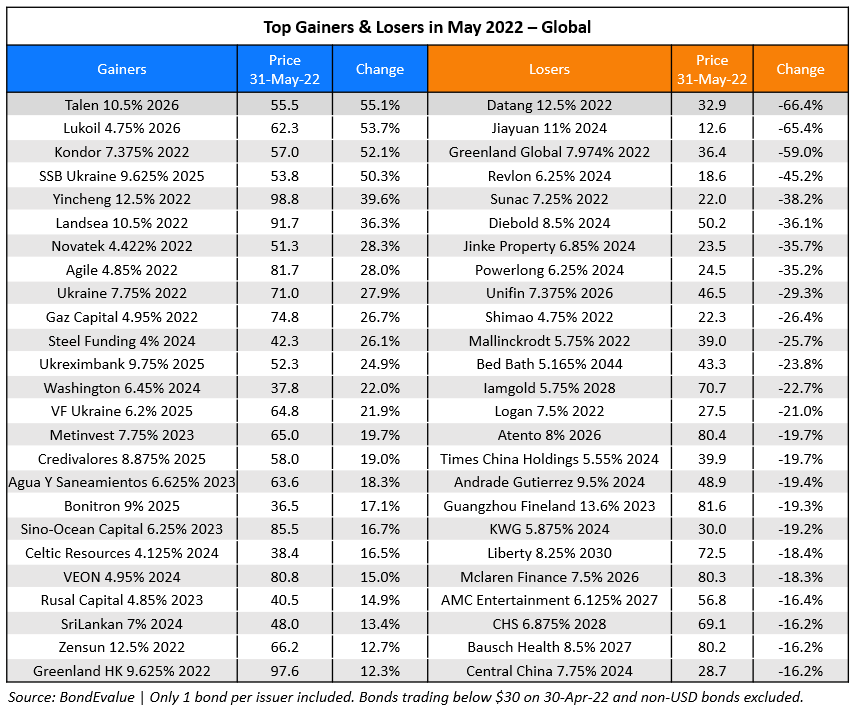 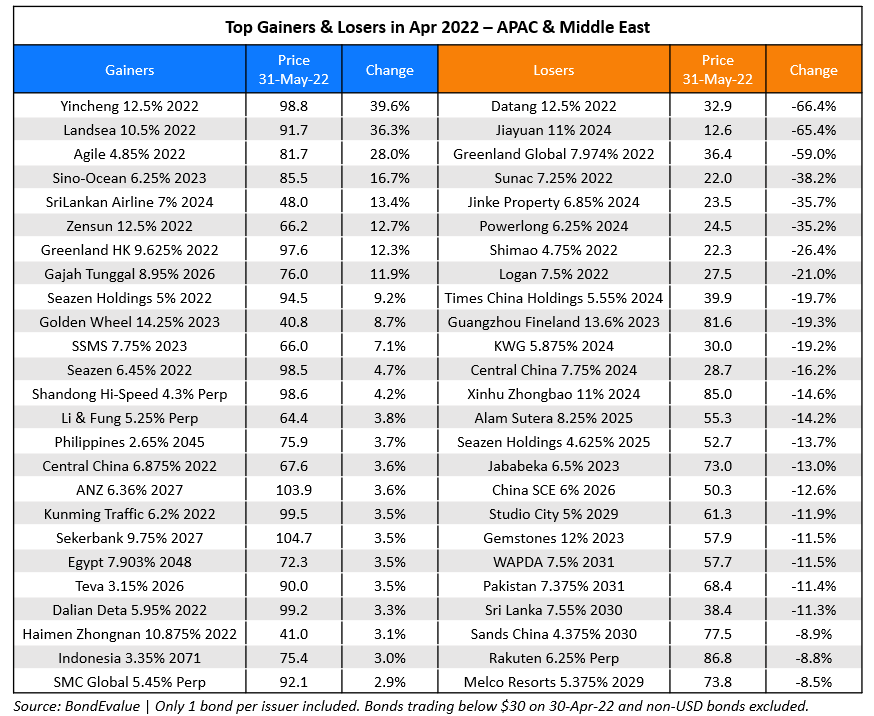