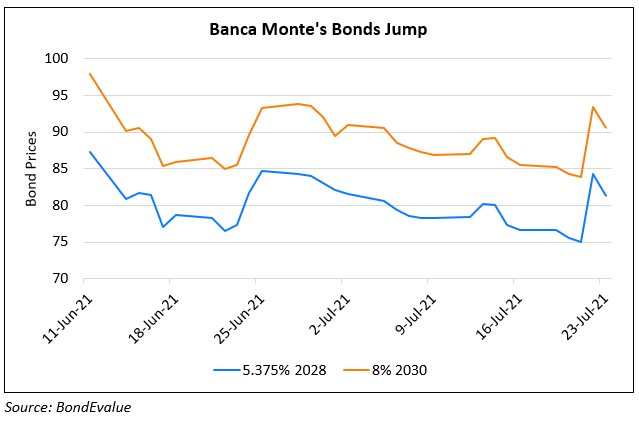 The world’s oldest bank, Banca Monte dei Paschi di Siena, reached an agreement with Monte dei Paschi foundation to reduce its legal liabilities (compensation claims) by €3.8bn ($4.5bn). The foundation would get €150mn ($177mn) as part of the settlement. This is seen as a step that can help remove a main obstacle to a possible sale of the bank. The deal was struck on the case of the purchase of Banca Antonveneta in 2007, and capital increases in 2011 and 2014-15 as per Bloomberg. The legal claims relating to this was previously reported at around €10bn ($12bn). The agreement which will be reviewed by the board on August 5, would help reduce “the main element of uncertainty weighing on the bank’s balance sheet,” it said in the statement. Prospects around the UniCredit-Banca Monte deal have been dim of late after the Italian government refused conditions attached by UniCredit’s new CEO Andrea Orcel. The government had bailed out Banca Monte in 2017 and has to divest its holding this year under EU rules. But, Banca Monte faces a €2.5bn ($3bn) capital shortfall as per Bloomberg and has warned it may need to postpone fundraising plans. Reports say that the former ECB President Mario Draghi led government is working on a proposal to submit to suitors by early August to speed up the sale process.

The Italian bank’s bonds rallied over 9 points yesterday and have corrected a bit from the highs.