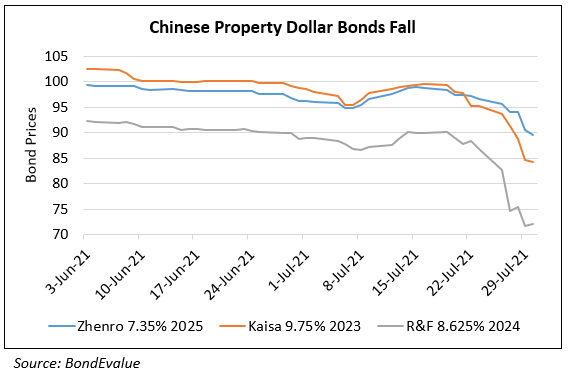 Dollar bonds of other Chinese property developers (ex Evergrande) fell over 3% on Thursday. Growing concerns over Evergrande coupled with Beijing’s crackdown seem to be having a ripple effect on other Chinese developers’ bonds including names such as Kaisa, R&F Properties and Zhenro Properties. All three companies are single-B rated names. While Kaisa and Zhenro meet all the three red lines thresholds, R&F breaches two. For a report on widening spreads of Chinese developers’ dollar bonds and three red lines calculations, click here. Besides these three issuers’ bonds, Greenland’s dollar bonds also traded weaker with its 5.875% bonds due 2024 falling 2.9 points to 76.625 cents on the dollar on Thursday.