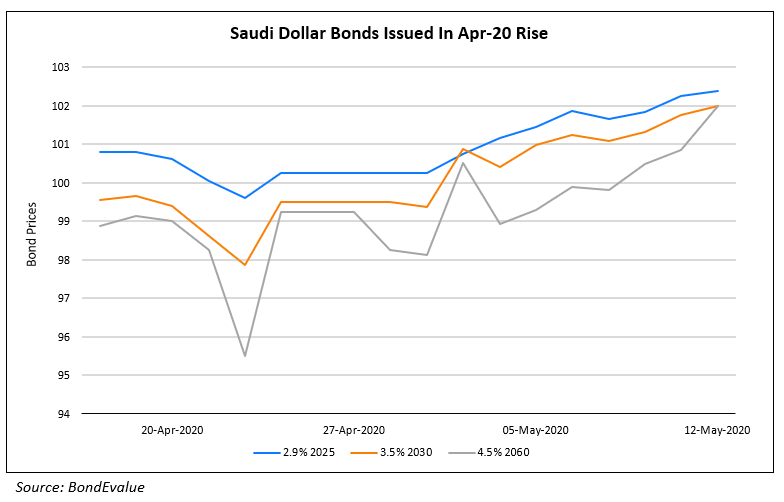 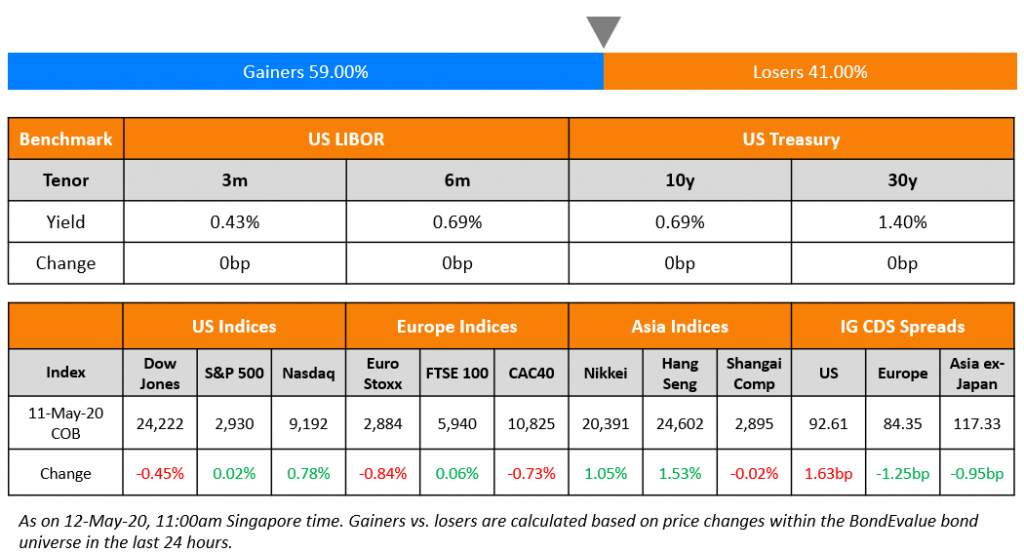 Asian stocks are opening cautiously today as investors think about the severity of a second wave as governments start relaxing lockdown restrictions. US markets were mixed but European shares were all down led by banking, mining and travel sectors. US treasuries lost ground and yield on the 30-year was up 4bp. Investment grade CDS spreads were wider by 1-2bp across. 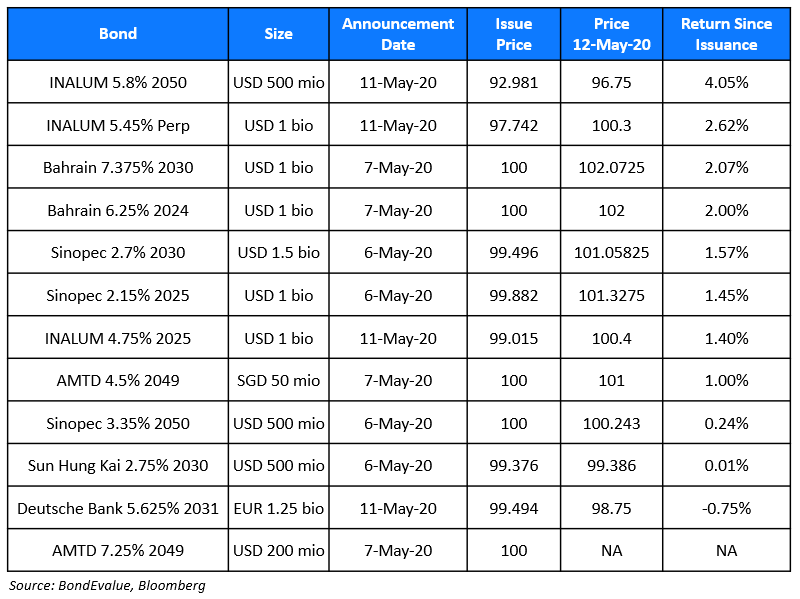 Moody’s has forecast that the rate of corporate bond defaults over the next one year are likely to be higher than that seen during the global financial crisis. According to the credit rating agency, the global recession could cause the default rate of junk bonds to increase between 8.3% and 13.7%. The default rate during the 2008 financial crisis was recorded as 13.6%. The sectors likely to be worst affected include retail and oil and gas, which had been witnessing rising defaults even before the current crisis.

Earlier on Sunday, JP Morgan had also painted a similar grim picture as it predicted a gap of 7% between emerging markets corporate bonds and the US sovereign bonds. Lowering of sovereign ratings would also put higher pressure on the cost of capital for the corporates as per bank. The good news is that some analyst feel that the emerging markets are much stronger now as compared to 2008 and that the estimates mentioned above are overstated. Even the IMF estimates that the developed economies will contract by 6.1% compared to 1.1% predicted for the emerging markets.

Deutsche Bank successfully sold €1.25bn of new bonds that count towards its capital buffers on Monday, taking advantage of renewed investor demand for financial institutions’ higher-risk debt following the coronavirus sell-off. Germany’s largest lender raised the new tier 2 debt, which ranks one notch above the bank’s highest risk additional tier 1 (AT1) bonds, at a yield of 5.625%, making it the first institution to raise bank capital in euros since coronavirus-related lockdowns took hold in March. AT1 bonds, which are sometimes termed “contingent convertibles” or CoCos because they can be converted into equity in times of stress, were hit quite a bit when concerns around the impact of the virus first gripped Europe in March. A $1.25bn AT1 bond raised by Deutsche in February fell to about half of its face value to 49.88 cents on the dollar on March 19, when financial markets witnessed heightened volatility. The bonds have since recovered to trade at 71.68 cents on the dollar. Similarly, its €1.75 6% Perpetual AT1s issued in May 2014 fell to 53 cents on the dollar on March 19, before recovering to 79.5 cents currently. 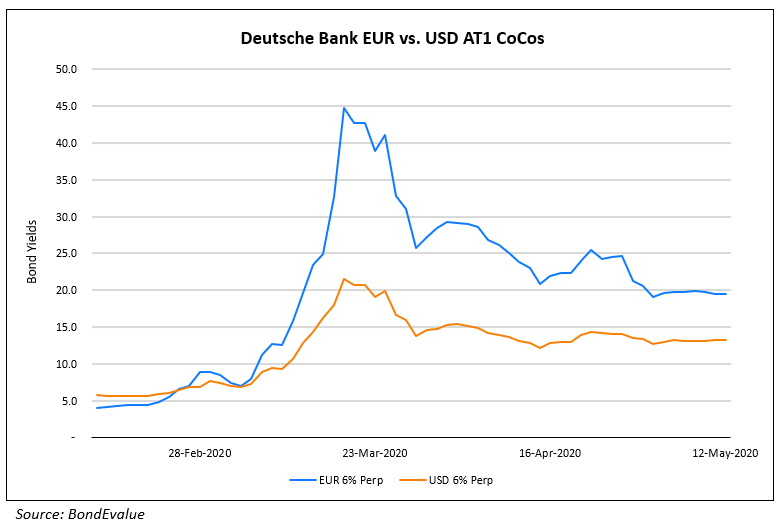 Saudi Arabia announced austerity measures to battle the impact of the pandemic and falling oil prices. The oil dependent economy tripled its value-added-tax (VAT) and cut cost-of-living allowance for government workers. According to the official Saudi Press Agency, these measures will shore up 100bn riyals ($26,6bn) for the government. Finance Minister Mohammed Al-Jadaan said that overall spending for 2020 will be close to what was planned with money saved being re-allocated towards healthcare and business aid. Todd Schubert, Head of Fixed Income Research at Bank of Singapore said, “These measures, beyond their practical impact, are a strong signal to the market that the kingdom is serious about getting its fiscal house in order. We would view this as a positive sign for the sovereign bonds.”

The Tadawul All Share Equity Index fell 3.5% before closing down 1.2%. Saudi’s dollar bonds rose on the news with its recently issued 5Y/10Y/30Y rising by 13/25/116bp respectively. 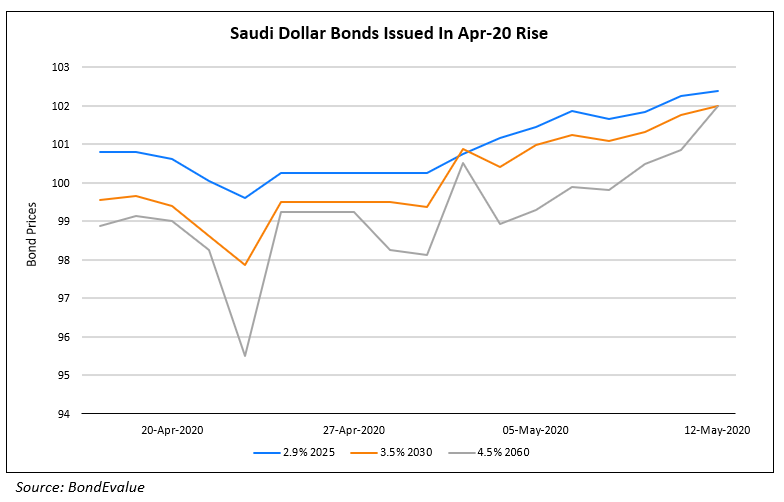 Chinese oil and gas company MIE Holdings has missed a $17mn coupon on its $248.394mn 13.75% bonds due 2022. The company failed to pay the coupon during its one-month grace period that ended on May 11. The missed coupon is an event of default on the 2022s and has also triggered cross-defaults on the company’s loan facilities. The company estimates the total amount of potential repayment demands is over $287.3mn in principal and accrued interest. It added that it has been proactively discussing with various creditors and company advisers in relation to a debt restructuring, which is expected to address its liquidity concerns, without giving details on the potential restructuring. Fitch Ratings affirmed and withdrew MIE’s Long-Term Issuer Default Rating (IDR) of C, citing ‘commercial purposes’ as it reason for withdrawal.

Rating agency S&P forecasts more governments to have their credit ratings cut on the back of adverse impact on their economies due to the pandemic. It currently has 25 countries on ‘Negative’ outlook, 6 on ‘Positive’ and 104 on ‘Stable’. “We think more negative rating actions are likely,” two of S&P’s senior analysts wrote in a new report, estimating that the average government deficit this year would be around 6.3%. S&P said that negative rating actions over the medium to long term would be likely if the impact of the pandemic are structural in nature for some countries.

Chinese securities firms are raising a record amount in short-term bills, taking advantage of central bank-fueled liquidity to turn around their flagging profitability as Wall Street’s giants prepare to pile in in full.
Seizing on a market plunge as the nation grappled with the outbreak of the coronavirus, China’s brokers issued 312 billion yuan ($44bn) of short-term bills in the interbank market in the first four months of the year, according to data compiled by Bloomberg. CITIC Securities Co. and China Merchants Securities Co. were the two biggest issuers, raising 38 billion and 33 billion yuan, respectively. “Most brokers are tapping into the short-term funding to boost investments in proprietary trading or re-lend to clients in margin lending,” said Zhang Jingwei, an analyst at Essence Securities Co. “The stock market is at a relatively low point and brokers are more motivated to enhance capital at the moment to buy low.” 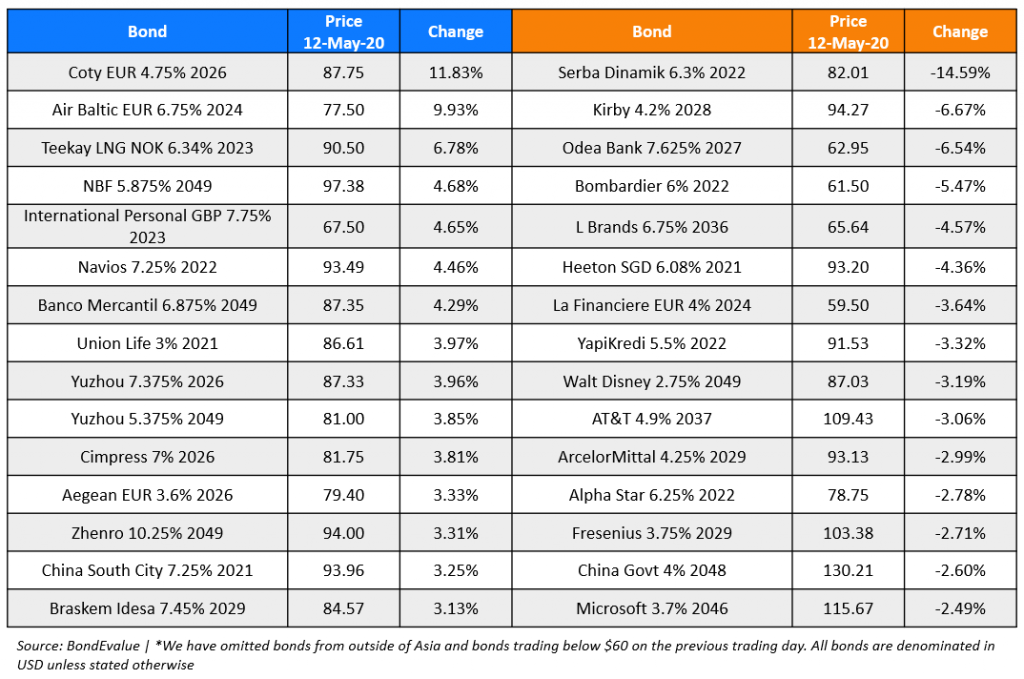