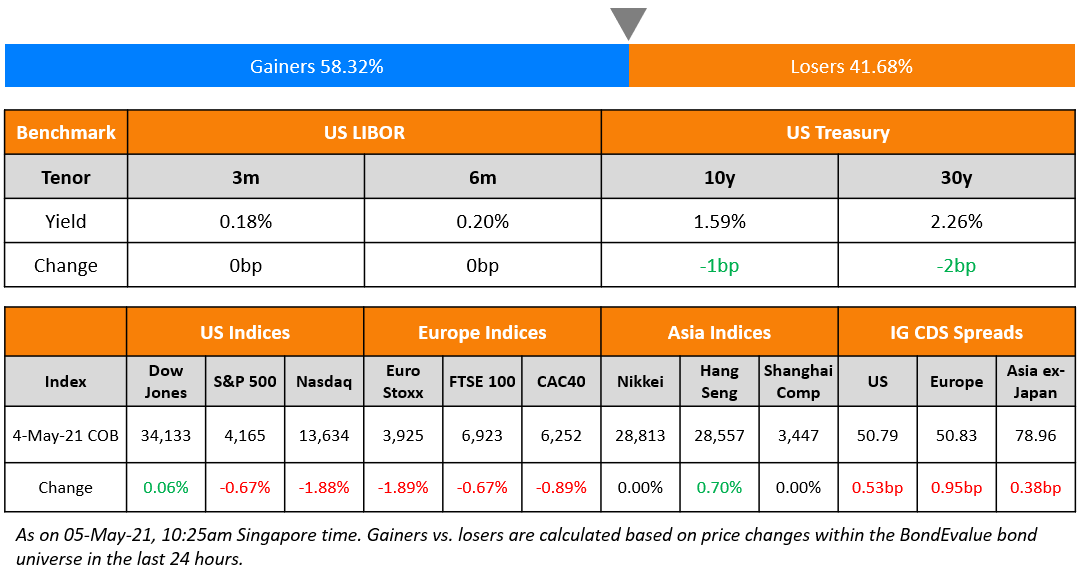 US equities were in the red on Tuesday as the S&P was down 0.7% while the tech-heavy Nasdaq tumbled 1.9% as US Treasury Secy. Janet Yellen commented, “It may be that interest rates will have to rise somewhat to make sure our economy doesn’t overheat”. Yellen later came out clarifying that she did not mean it was time for the Fed to hike rates. US 10Y Treasury yields were marginally lower 1.59%. US IG CDS spreads were 0.5bp wider and HY widened 3bp.  EU main CDS spreads were 1bp wider and crossover spreads widened 5.9bp. Asian equity markets are mixed while Asia ex-Japan CDS spreads were 0.4bp wider. 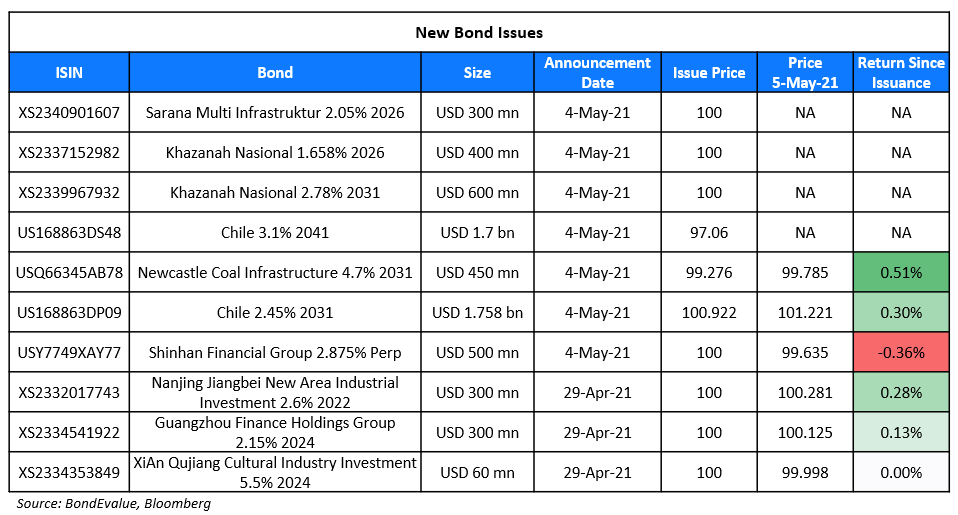 Shinhan Financial Group raised $500mn via a sustainability Perpetual non-call 5Y (PerpNC5) AT1 bond (Term of the day, explained below) at a yield of 2.875%, a strong 52.5bp inside initial guidance of 3.4% area. The bonds have expected ratings of Baa3, and received orders over $2bn, 4x issue size. If not called, coupons will be reset on the first reset date of May 12, 2026 and every five years thereafter. The bonds’ non-viability loss absorption would see a full and permanent write-off if the issuer is considered an “insolvent financial institution” pursuant to the act on the structural improvement of the Financial Industry of Korea. The bonds have a dividend stopper. Proceeds will be used for eligible green and social projects under the group’s sustainable development goals financing framework. The company also intends to use the proceeds to support SMEs and underprivileged individuals affected by the coronavirus outbreak.

Sarana Multi Infrastruktur raised $300mn via a 5Y bond at a yield of 2.05%, 35bp inside initial guidance of 2.4% area. The bonds have expected ratings of BBB, and received orders over $2bn, 6.7x issue size. There is a change of control put at 101 if the Indonesian government ceases to directly or indirectly own 51% of the issuer, or ceases to control the issuer, along with a rating cut.

Additional Tier 1 (AT1) bonds are hybrid securities issued by financial institutions to meet their regulatory capital requirements. AT1s typically carry a provision wherein the instruments can be fully or partially written-down or converted to equity if the issuing bank’s capital ratio falls below a certain threshold. This is why AT1s are also known as contingent convertibles (CoCos). The key characteristics of AT1 bonds are:

On Yellen’s remarks that rates may have to rise to prevent overheating
Janet Yellen, US Treasury Secretary
“It may be that interest rates will have to rise somewhat to make sure that our economy doesn’t overheat, even though the additional spending is relatively small relative to the size of the economy,” she said. “So it could cause some very modest increases in interest rates to get that reallocation. But these are investments our economy needs to be competitive and to be productive.”
“It’s not something I’m predicting or recommending,” she said.  “If anyone appreciates the independence of the Fed. I think that person is me.” On US President Joe Biden’s investment plans, “those investments will be phased in gradually over time. The proposals we have are for eight to 10 years, and involve more modest increases in spending, and tax increases to largely pay for them,” Yellen said. On her interactions with Federal Reserve chairman Jerome Powell, “we have a wide range of issues we talk about, but it is entirely up to the Federal Reserve, how they manage monetary policy. It’s something I’m not going to give opinions about.”
Jen Psaki, the White House press secretary
“We . . . take inflationary risk incredibly seriously, and our economic experts have conveyed that they think this would be temporary and that the benefits far outweigh the concern,” Psaki said. “I think [Yellen] was simply answering a question and conveying how we balance decision-making here.”
On Yellen’s clarification of inflation remark that ruffled financial markets
Janet Yellen, US Treasury Secretary
“The Fed can be counted on to do whatever is necessary to achieve their dual mandate objectives,” she said.
Tony Fratto, a former White House and Treasury official under President George W. Bush
“Treasury secretaries shouldn’t talk about the Fed’s policy rate, and Fed governors shouldn’t talk about US dollar policy.”
Michael Gapen, chief U.S. economist at Barclays Plc
“It should not come as a shock that the two very large spending bills being contemplated would push longer-term interest rates higher,” said Gapen. “That’s consistent with what markets would say.”
On the view that full U.S. employment ‘may take a few years’ – Neel Kashkari, Minneapolis Federal Reserve Bank President
“I assume that that folks want to work again,” Kashkari said. “How long is it going to take to bring all of those folks back into the labor market and really achieve full employment? We’ll see, it may take a few years.”
On US tech stocks suffering worst day since March as pandemic winners suffer
Jim Tierney, CIO of concentrated US growth at AllianceBernstein
“Even though rates are not going up [today], we are seeing more and more pockets of inflation bubbling up…The equity market might be saying, ‘Hey, we’re worried about inflation”.

Brian Bost, co-head of equity derivatives in the Americas at Barclays
“The fact stocks had pulled back despite the strong results was a “‘tell’ on current market positioning. Moreover, whether you think inflation could be transitory or not, you at least have to consider higher risk premiums”.

Juliette Cohen, strategist at CPR Asset Management
“We have lowered our exposure to the US market and particularly to tech, where companies’ results have been strong but valuations are probably now too high”.

Didier Rabattu, head of equities at Lombard Odier
“Investors are getting out of lockdown stocks in the short term”.

On trouble brewing for the US junk bond market – Randy Brown, chief investment officer of Canadian insurer Sun Life Financial Inc
“There is a shakeout to come in the lower tiers of credit, but not the upper tiers,” Brown said. “That’s not near term. I think we probably have a couple years of runway.” “I don’t feel like I’m being properly compensated for the risk, and I can do much better in private credit,” Brown said. “All this debt has to be repaid at some point,” said Brown. “Nobody is worried about that today because the cost of that debt is so low.” “We’re creating a sort of structural imbalance,” Brown said. “The supply of credit has increased dramatically — when does the regime shift, and people decide it’s time to sell credit, and sell spread?” “Those are two sectors that we think can perform well in a stable to rising inflationary environment, as long as inflation isn’t runaway,” Brown said. “We tend to avoid cyclicals,” Brown said. “We put an overweight on sustainability and disruption.” 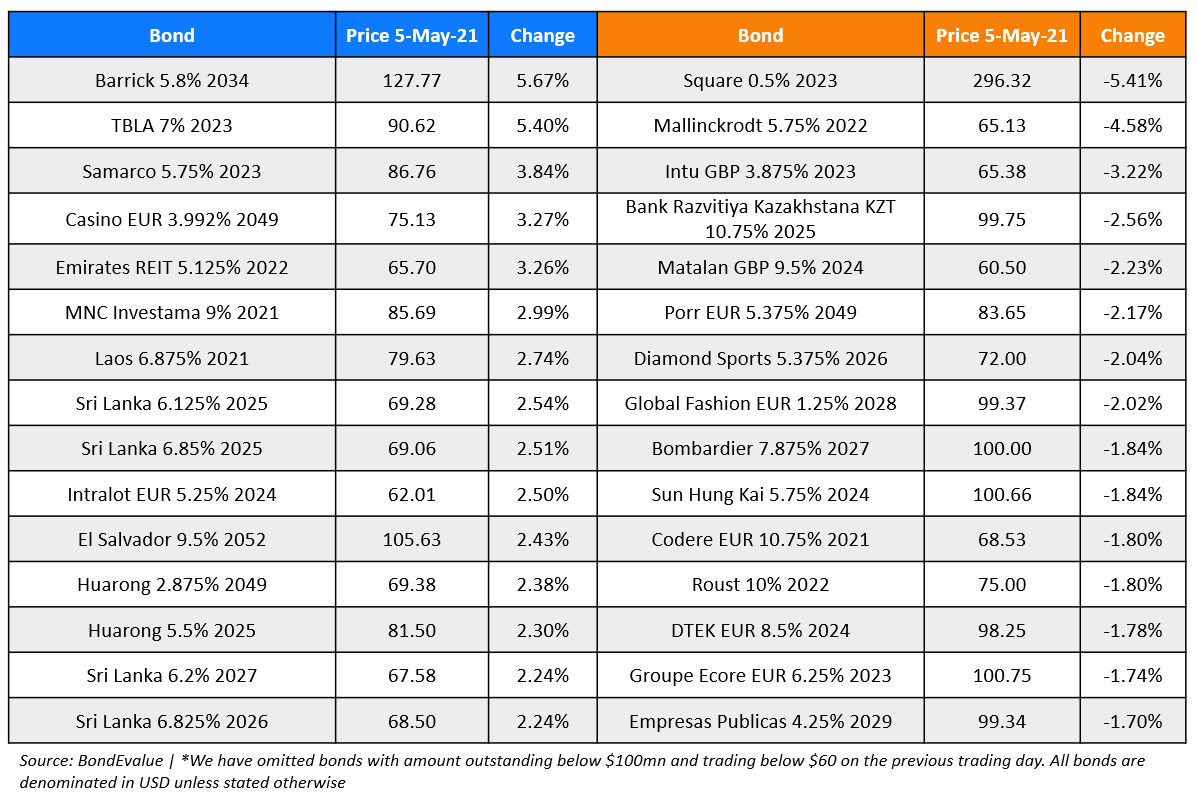