NFP for June at a Record High of +4.8mn; US Junk Bond Funds Witness Big Outflows; SAIC to Buy Stake in CAR Inc 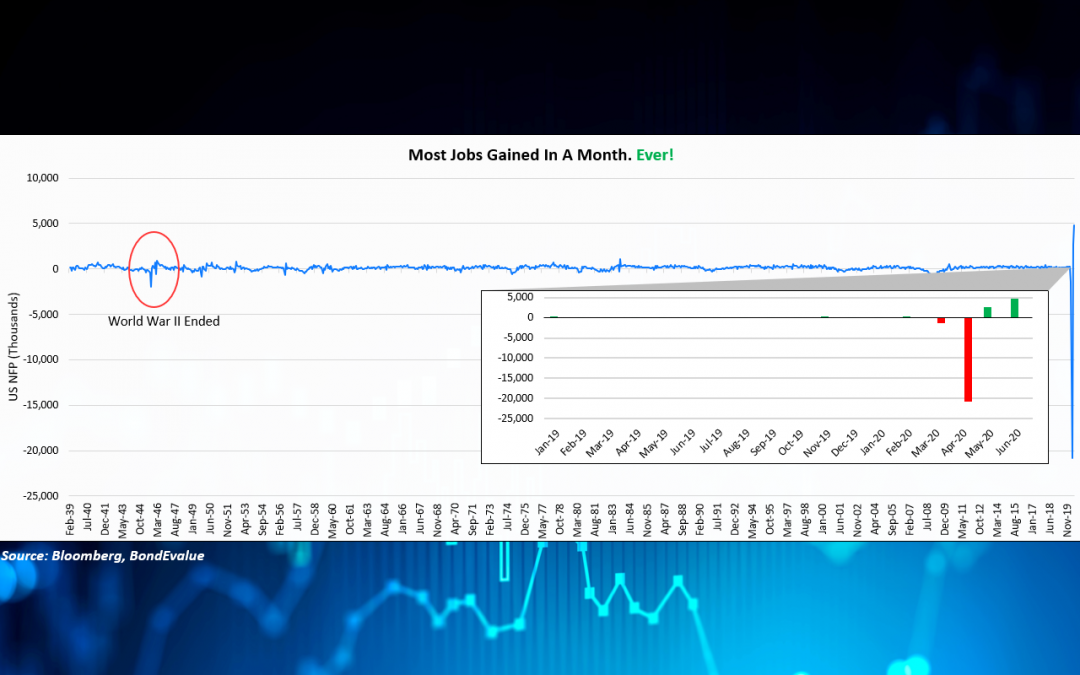 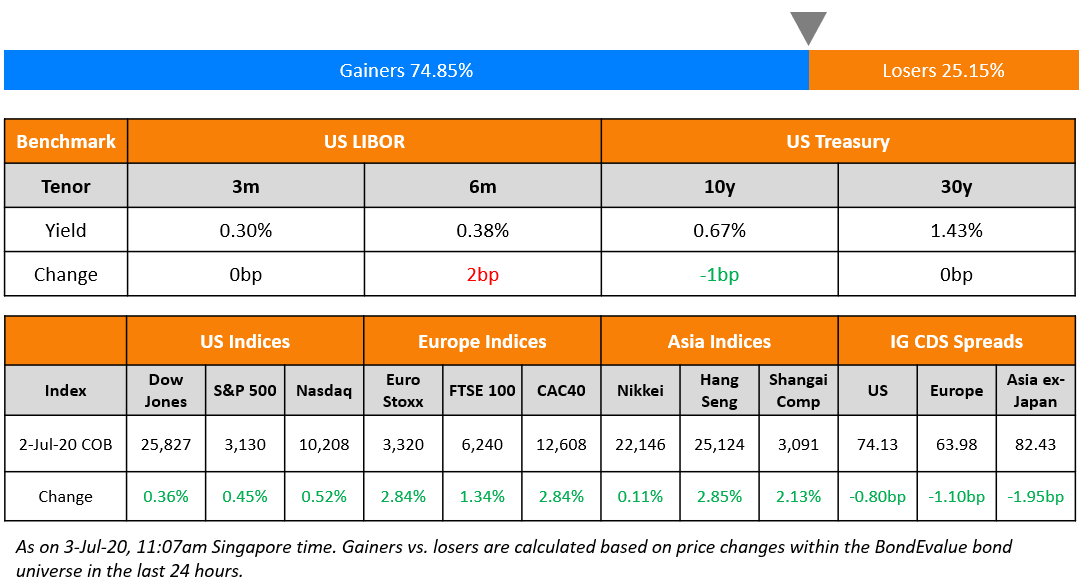 Stronger than expected US NFP data of 4.8 million in June vs 3 million expected gave a knee-jerk rally for stocks. The unemployment rate also fell to 11.1% from 13.3% last month. The intraday rally was short-lived and reversed much of the gains as many are concerned that the recent spike in coronavirus cases is stalling the recovery. The jobless claims number that came out yesterday as well showed that about 19.3 million people are collecting ongoing unemployment benefits. New claims totaled 1.4 million and were higher than expected. The monthly jobs report reflects data collected in the week of June 12, while the continuing claims data is more current, reflecting last week’s activity. This places a lot of importance on the July NFP number.

US treasury yields were initially higher on the positive sentiment but reversed this move and prices rallied eventually. US high yield bonds saw their biggest weekly outflow since 2017 for the week ended July 1 as investor appetite for lower rated debt seems to be diminishing. Spreads in Asian dollar bond market are mostly unchanged for the week but seeing a slowdown in the number of deals. The daily coronavirus cases globally crossed the 200,000 mark and the US also hit a new daily record before the long weekend there for Independence Day. 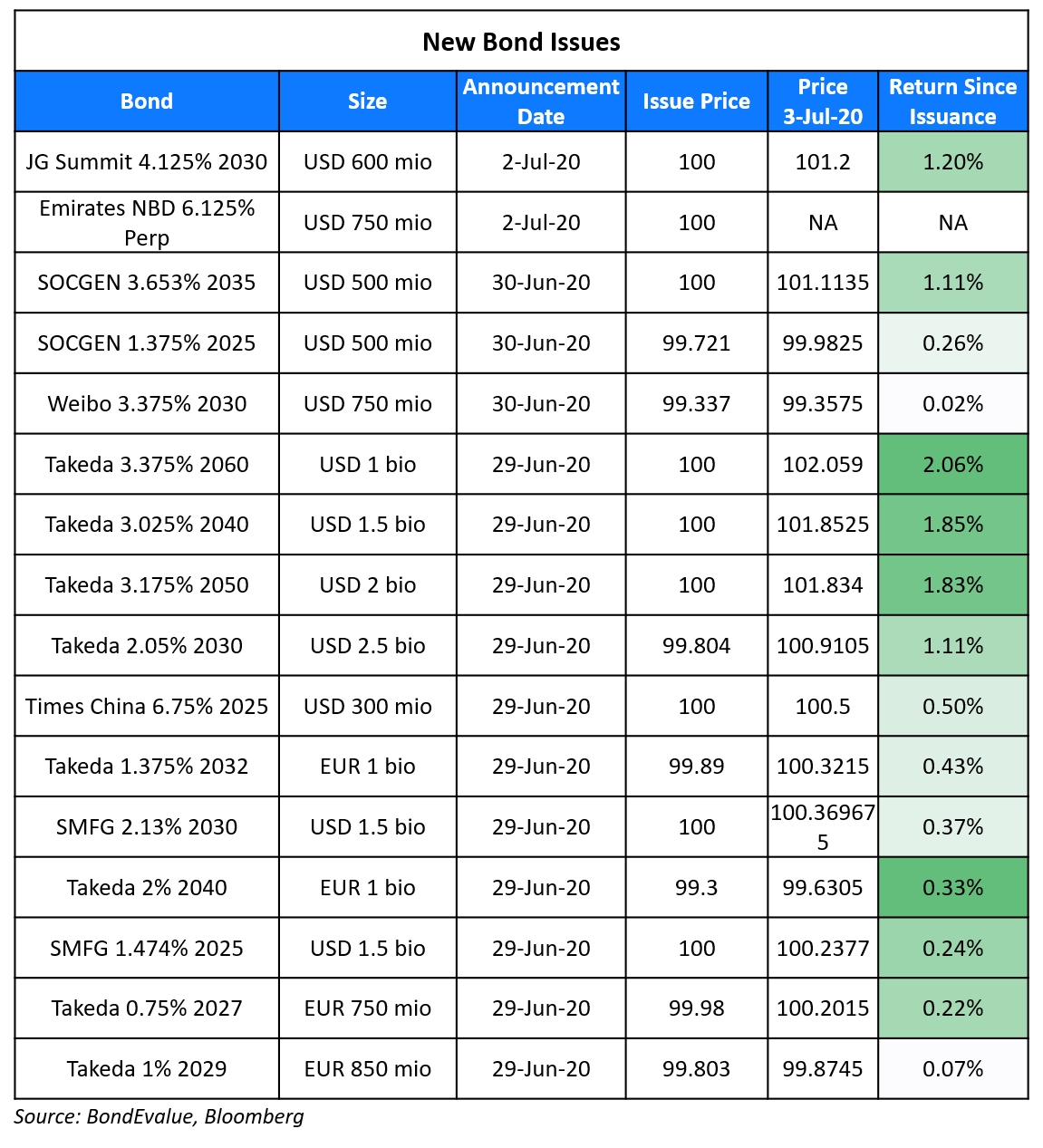 Emirates NBD raised $750mn via perpetual non-call 6Y additional tier 1 (AT1) bonds at a yield 6.125%. The bonds carry a coupon reset every 6 years if not called to the 6Y Treasury yield plus a spread of 5.702%. Emirates NBD is a state-owned bank and is rated A+/A3. Orders reached $2.3bn, over 3x issue size at the time of final guidance.

Philippine conglomerate JG Summit raised $600mn via 10Y at a yield of 4.125%, 37.5bp inside initial guidance of 4.5% area. The unrated bond received final orders exceeding $2.6bn, 4.33x issue size. Wholly owned subsidiary JGSH Philippines is the issuer while JG Summit is the guarantor. This is JG Summit’s first dollar bond issue since 2013, where they raised $600mn via 10Y bond similarly at a yield of 4.375%. The bond is trading at 2.627% right now.

A second wave of coronavirus cases in the US over the past week seem to have spooked investors as they pulled out $5.55bn from US high yield bond funds during the week ended July 1, according to Refinitiv Lipper. This surpasses the outflows of $5.1bn in the week ended March 4, when markets globally took a beating on fears of the spreading pandemic. Investors have been piling into junk bonds over the past few months on the back of the Fed’s announcement that it would buy into junk bonds to stimulate the economy. “Given the strong flow into the asset class in the quarter, combined with strong returns, investors are taking some chips off the table. We see this as short-sided,” said John McClain, a portfolio manager at Diamond Hill Investment Group. Yield on the Bloomberg Barclays US Corporate High Yield Index have almost halved since the recent peak of 11.7% on March 23 to 6.62% currently. Price and yields move in opposite directions, indicating an increase in high yield bond prices over this three month period. 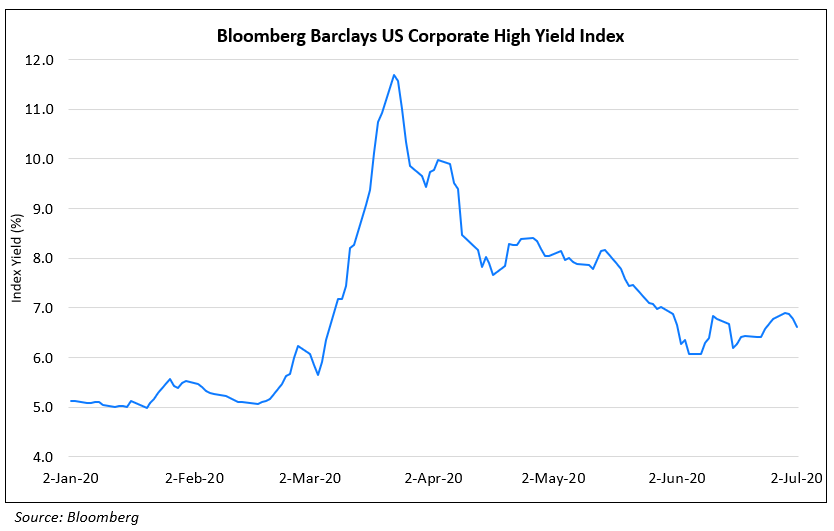 Shanghai-listed SAIC Motor agreed to buy up to 28.9% of CAR Inc for HKD 1.9bn ($254mn) from two major shareholders, UCAR Inc. and Amber Gem Holdings. UCAR is controlled by Chinese billionaire Lu Zhengyao, who resigned as CAR’s chairman and non-executive director on June 9 on the back of the accounting scandal at Luckin Coffee, also controlled by Zhengyao. Amber Gem is controlled by private equity giant Warburg Pincus. The exchange filing published on Thursday evening states that SAIC will buy UCAR’s entire stake of 442.7mn shares and over half (169.6mn shares) of Amber’s 312.9mn shares. Moody’s downgraded CAR Inc. twice by a total of three notches from B1 to Caa1 in April after the Luckin Coffee scandal broke out, citing a potential impact of the scandal on CAR’s access to funding. The offer by SAIC is subject to several conditions including a formal sale and purchase agreement and regulatory approvals. Credit research firm Lucror Analytics said the development is positive for CAR because of “the incoming new substantial and deep pocket state-owned shareholder, which could provide significant support in time of crisis”. Lucror added that there is synergy as CAR may be able to acquire cars at a good discount while SAIC may improve CAR’s corporate governance.

Mclaren announced a consent offer on its exiting bonds maturing in 2022 to raise additional funding. At the heart of the matter lies a beautiful collection of heritage cars, valued at $315mn. Here’s the link for some amazing pictures of the cars.

The existing bondholders and McLaren were locked in a legal battle on whether these cars could be pledged as collateral to new lenders with the car manufacturer representing that it will run out of money by July 17. BBC had earlier reported that the National Bank of Bahrain had agreed to provide additional funding, without the pledge of the cars. Hence, the court case has been withdrawn. Interestingly, the bank and McLaren have Mumtalakat as a common and substantial shareholder.

As the world’s fourth most populated country eases its pandemic rules after months of lockdown, Indonesia’s Garuda longs for a travel recovery. The flagship carrier of the country has seen a 16% jump in its capacity since the government eased travel rules on Jun 8. However, whether this jump would be adequate to bring a revival to the beleaguered airlines remains uncertain. The airline has been stressed after the pandemic shock gripped the airline industry. Its $500mn sukuk issued in June 2015 dropped ~30 points in March this year on uncertainty over its ability to repay. It was forced to go in for debt restructuring with government aid to ensure its survival. The government, which owns 61% of the airline announced a bailout (Term of the day, explained below) in the form of an infused 8.5tn rupiah ($590mn) into the airline to meet its working capital requirements. The airline also cut its costs by renegotiating aircraft lease agreements as well as employee salaries. In the first quarter, it reported a net loss of $120mn, which could continue in the second quarter. The airline’s President Director Irfan Setiaputra said “There have been continuous improvement in consensus among analysts on when the industry will fully recover,” and added “In May, they were saying it will happen in 2023 but as of last week it has been moved forward to 2022. If the industry can fully recover only in 2022, then Garuda will not be able to make it.” The airline 5.95% bond maturing 2023 traded up by 1 point overnight to 67.096 cents on the dollar.

Bailout refers to the financial support provided to a sovereign or a corporation, which is on the verge of bankruptcy. A bailout may take the form of liquidity injection through cash, loans, bonds, stocks or even subsidies. It may also sometimes help in avoiding an insolvency process. The aim of a bailout is to prevent the bailed out entity from becoming insolvent. The response to the Covid-19 pandemic has seen one of the largest bailout packages unveiled by different governments. The US government rolled out in March 2020 a rescue package of $2.2tn, of which $25bn would be in direct grants and another $25bn in loans or guarantees to passenger airlines that included big names such as American Airlines, Delta Airlines and United Airlines. Similarly, small and medium businesses have also been on the receiving end of the bailout package. Some of the other major bailouts include General Motors, Chrysler, Fannie Mae and Freddie Mac during the 2008 financial crisis.

“It’s a strong signal that four parliamentary groups support the motion. It’s a signal for Frankfurt that the Bundesbank will continue to take part in the program.”

“The German authorities have assessed the PSPP as proportionate before the Constitutional Court. With the new documentation, they are in a position to further corroborate their initial finding if necessary.”

China’s ultra-low interest rates and this year’s liquidity are fuelling demand for convertible bonds, with most of them oversubscribed. Speculators are concerned that China may soon witness its first convertible bond default. “Convertible bonds meet the needs of the market amid declining bond yields,” said He Qian, who says more companies will tap the market given the relatively cheap funding available. “For fixed-income investors in the second half of the year, it will be a key source of outsized returns.”

On the Latin America Fund – Jose Dario Uribe, president of the fund, known by its Spanish acronym FLAR

The Latin American Reserve Fund has the capacity to issue bonds for up to $4.35 billion to fund loans to central banks in the region, according to Jose Dario Uribe. It can be ready to tap markets within two months, but the amount will depend on the borrowing needs of its eight member countries. Members, which include Colombia, Bolivia, Peru, Costa Rica, Ecuador, Paraguay, Uruguay, and Venezuela, would be able to tap a five-year line of credit with a three-year grace period. Thus far, none have requested a loan, he said. FLAR is the latest entity after IMF to offer foreign exchange relief to Latin American central banks. 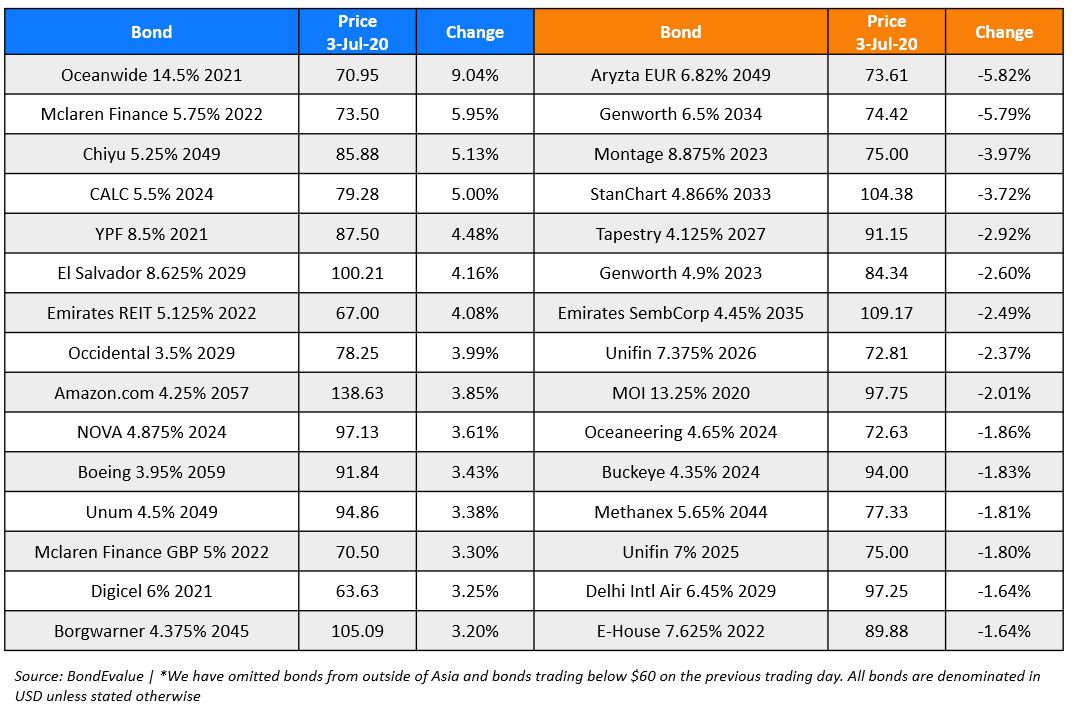