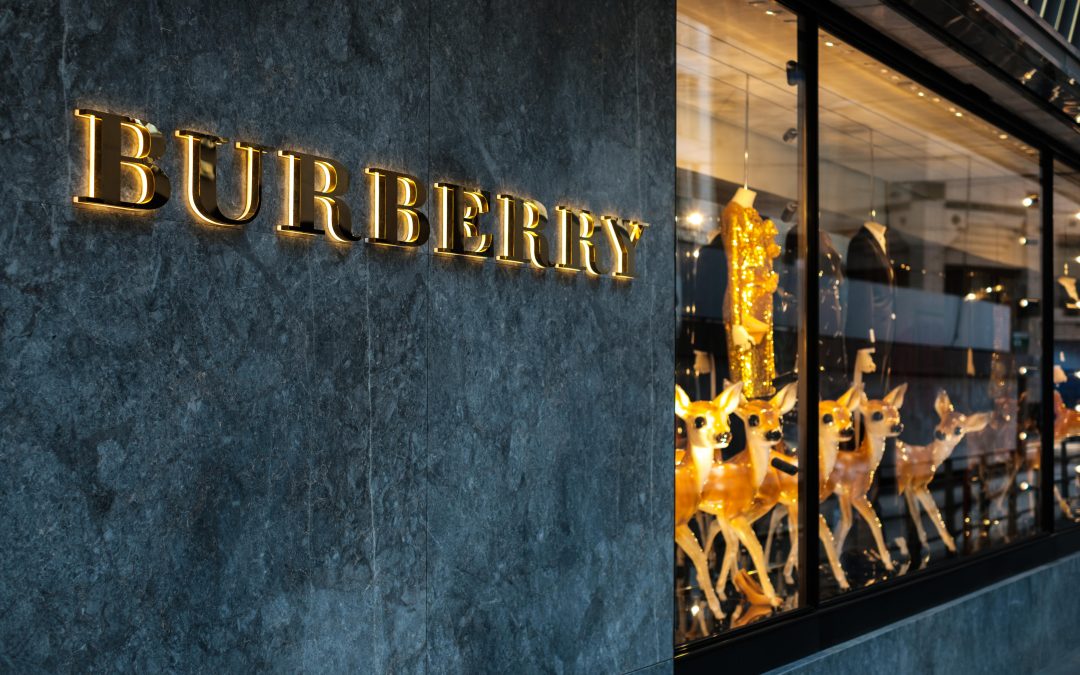 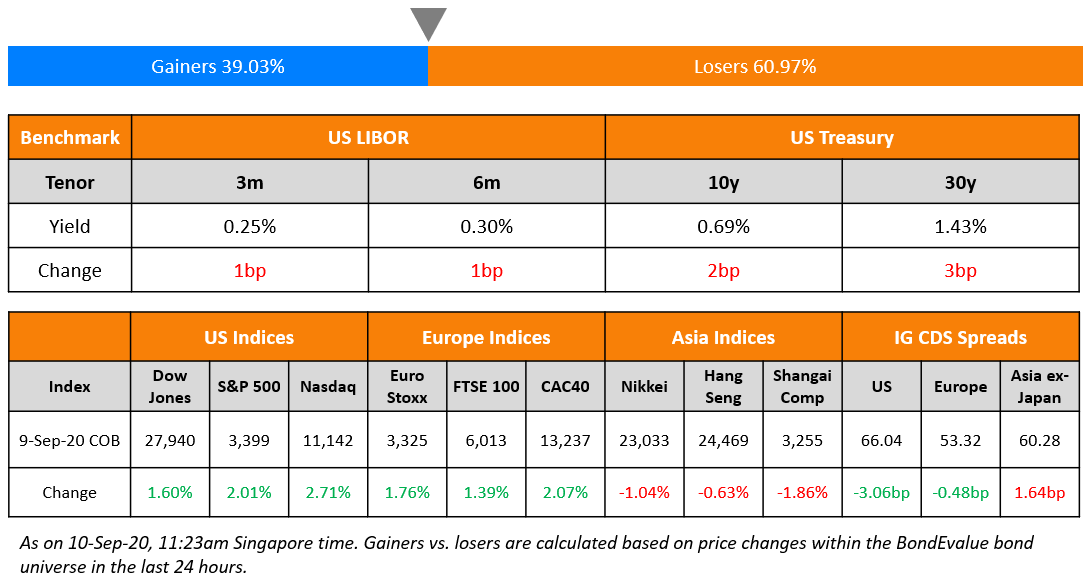 Following a 10% correction on Nasdaq in the last few days, the index saw investors come back to buy up relatively cheaper technology stocks triggering a 2.7% rally. Apple, Microsoft and Amazon were up 4%, 4.3% and 3.8% respectively while Tesla recovered 10.9% after the prior day’s 21.1% loss. Other major indices were also higher breaking the recent losing streak. European shares were higher by 1.4% to 2% ahead of the ECB policy meeting today. Treasuries did not lose much ground despite the reversal in tone with only the long end higher by 2bp. US IG CDS spreads narrowed 3bp. Asian primary bond market is seeing a surge in activity encouraged by the risk-on sentiment from yesterday and Asian markets are opening higher this morning by 0.5%-1.0%. 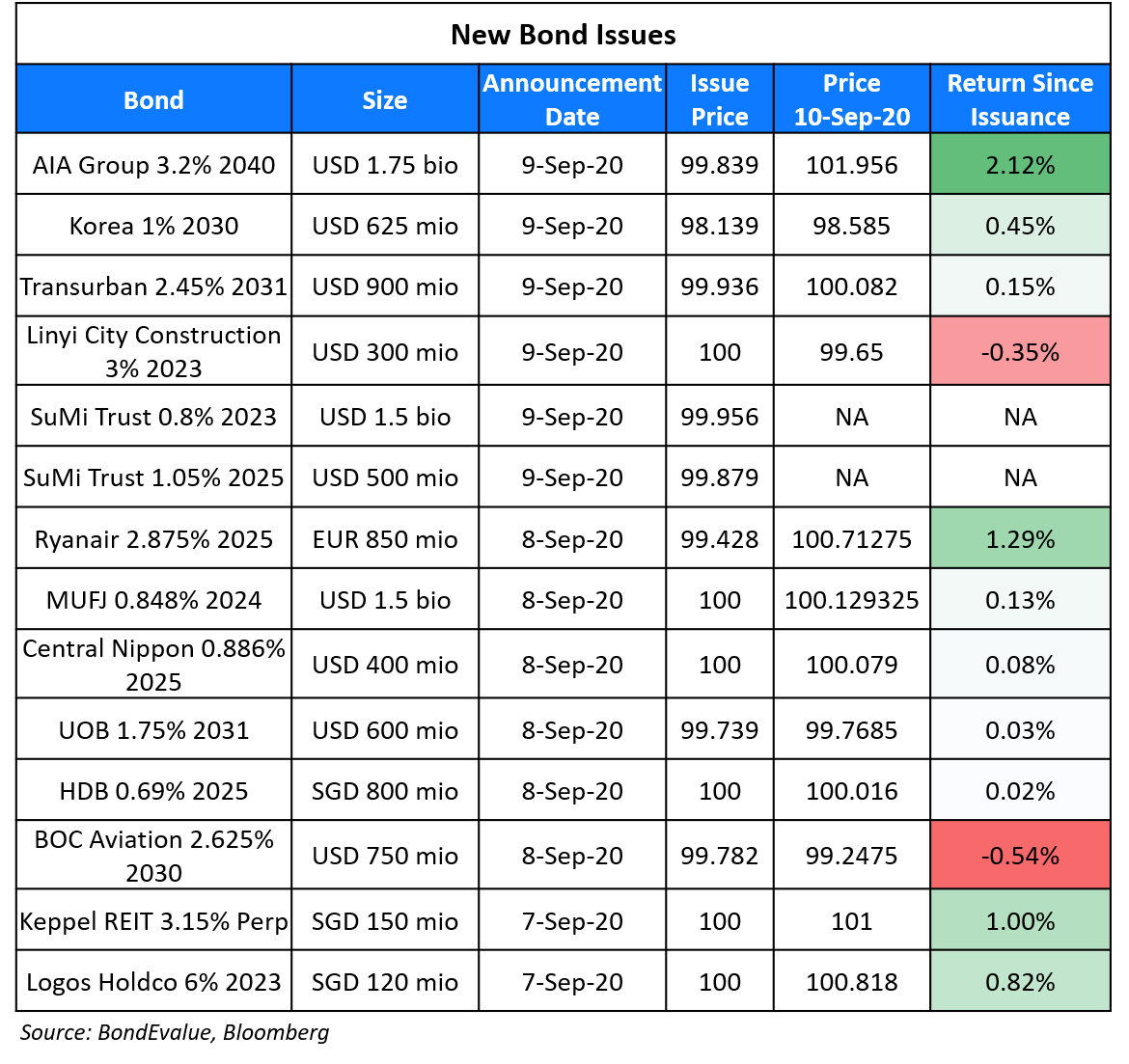 AIA raised $1.75bn via 20Y subordinated bonds at a yield of 3.211%, 175bp over Treasuries and 35bp inside initial guidance of T+210bp area. The bonds, expected to be rated A3/A-/A, are different in structure compared to tier 2 bonds under the EU’s Solvency II regime in that its coupons are mandatory. Similar bonds under Europe’s regime allow coupon deferment if solvency ratios drop below a threshold. AIA’s tier 2 bonds come ahead of Hong Kong’s introduction of new capital rules for insurers in the first quarter of next year.

Linyi City Construction Investment Group raised $300mn via its debut dollar bond at a yield of 3%, 50bp inside initial guidance of 3.5% area. The bonds, expected to be rated BBB-, will be issued by wholly owned subsidiary Yi Bright International and guaranteed by Linyi City Construction, which is the largest government investment vehicle by assets and revenue in Linyi, Shandong province.

Demand for Dollar Bonds from China at Record High of 7.6x Issue Size in August

August saw the strongest investor demand for new dollar bonds from Chinese corporates as bid-to-cover ratios stood at 7.6x issue size, the highest on record as per Bloomberg, which began recording this statistic in 2016. This was a tad higher than overall demand for dollar bonds from Asia ex-Japan, which stood at 6.8x issue size, the highest level since March 2019. Deals that met with stronger demand include Powerlong Real Estate’s $200mn 6.25% bonds due 2024, which received orders exceeding $2.5bn, 12.5x issue size and Axiata’s 2.163% sukuk due 2030, which got orders in excess of $3.8bn, 7.6x issue size. The strong demand can be explained by the low yield environment in developed markets that has pushed investors to the higher yielding Asian markets. According to a survey by Bloomberg, most bankers expect Asia ex-Japan issuers to issue $84bn worth of bonds in the final four months of 2020. This would take the full year’s total to $308bn, about 5% lower than 2019’s record issuance of $326bn. 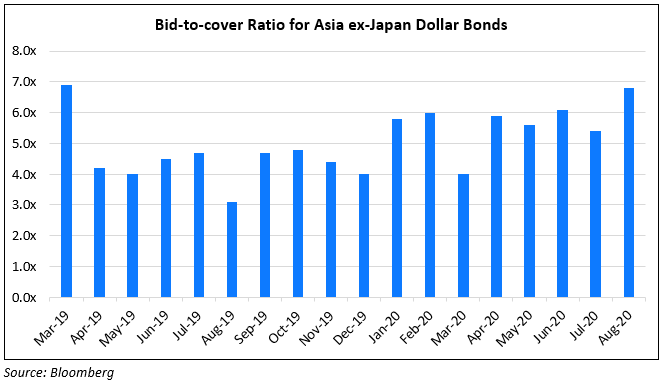 America’s largest bank by assets, JP Morgan priced its debut green bond on Wednesday, raising $1bn at a yield of 0.653%, 48bp over Treasuries and 17bp inside initial guidance of T+65bp area. Proceeds will be used to fund eligible sustainable projects, which may include green buildings and renewable energy, according to Sustainalytics’ second-party opinion. Earlier this year, the bank is said to have stopped advising and lending to companies whose revenues come from coal extraction in a bid to meet its sustainability goal of exiting credit exposure to such companies by 2024.

French telecom operator Orange S.A issued its debut sustainability bond on the same day, raising €500mn via 0.125% bonds due 2029. Orange indicated that it plans to use 40% of the proceeds towards digital and social inclusion projects and the balance 60% towards energy efficiency and circular economy projects. The bonds, expected to be rated BBB+, received orders exceeding €2.5bn, over 5x issue size.

UK-based luxury brand Burberry is also planning a sustainability bond, a first for a company in the luxury space according to the company. The sterling denominated bonds are expected to be rated Baa2 and would be “benchmark-sized, medium-dated”. The proceeds will be used to finance and/or refinance sustainable projects as described by Burberry‘s Sustainability Bond Framework. The bonds are expected to be launched over the next few days.

In a filing on Wednesday, Biosev, a subsidiary of Louis Dreyfus, disclosed that it was in preliminary talks for a possible merger with Brazil’s largest sugar producer Raizen Energia SA. If the deal materializes, Louis Dreyfus could swap Biosev for a minority stake in Raizen. Biosev has been battling debt woes for a while and the loss of demand for ethanol due to low oil prices and the surplus sugar production amidst the pandemic slowdown has only added to woes of the sugar company. It reported its ninth consecutive annual loss in March of BRL 1.55bn ($300mn) with a 22% increase in debt vs. the previous year. The deal is likely to include a debt restructure of Biosev under which Dreyfus could pay a part of Biosev’s BRL 7.3bn ($1.4bn) debt upfront. Dreyfus is in the process of raising funds to pare its debt and is reportedly in talks to sell a minority stake to Abu Dhabi sovereign wealth fund ADQ.

Tullow Oil Warns of Default After Reporting a $1.4 Billion Loss for 1H 2020

Tullow Oil warned that it risked defaulting on its reserves-based lending (RBL) facility if it fails to resolve a potential liquidity shortfall during the ‘redetermination’ of its RBL next January when it must show sufficient funds for the following 18 months during which its debt worth $650mn is due (April 2022). The warning comes after Tullow revealed on Wednesday a $1.4bn pre-tax loss for the first half of 2020. It is considering refinancing the senior notes due in April 2022 or convertible bonds due in July 2021 to address the potential shortfall. Other options under review include seeking to “secure new liquidity from banks or capital markets investors”. Tullow reported a net debt of $3bn vs. $2.9bn last year with a negative free cash flow and a huge writedown of $941mn related to its assets in Uganda, which is to be sold to Total SA, and in Kenya. Both bonds expected to be refinanced fell by 8-12 points since Tuesday’s close to 56.3 and 73.7 for the 6.25% 2022s and 6.625% 2021s.

Selecta, a Swiss vending machine operator, announced a signing up of a lock-up agreement by key financial stakeholders in support of a proposed recapitalization. The provisions of the agreement include the following.

Reuters had reported in May that KKR was preparing to inject funds into the company. KKR is one of the key stakeholders in Selecta and the lock-up agreement is seen as paving the way for a fund injection of €125mn by KKR. Additionally, the outstanding bonds would be converted to securities with maturities beyond 2026 to provide immediate relief to the company. Joe Plumeri, Executive Chairman, said “We are therefore delighted with the supportive response of our banks, noteholders and shareholders in providing additional new capital for the business, extending the maturity of debt obligations and significantly deleveraging the Company’s balance sheet. These actions ensure we are now on a very stable footing and allow us to deliver on our strategic business plan as we traverse the post-COVID-19 operating landscape. Selecta’s euro bonds were up by more than 20% since the announcement. 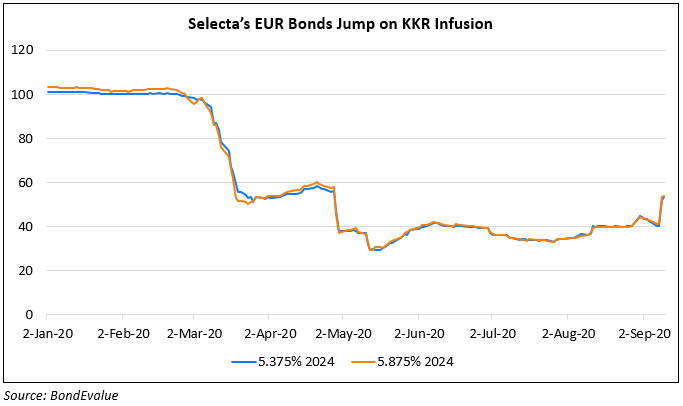 UBS is planning to nudge it’s international customers holding swiss francs into investments by significantly hiking the holding cost for deposits less than CHF 500,000. At the end of June, customers were informed of an increase in annual fees of CHF 3,960, up from CHF 330 for all such cash deposits. The Swiss Franc LIBOR has been in negative territory for the latter half of the decade and the reputation of Switzerland as a safe haven has meant that UBS and its peers have seen a drag on their profitability from negative yielding cash deposits onshore. UBS started passing on the negative rates to clients last year, which resulted in substantial outflows and since then the bank has been trying to find a balance between sharing the cost with the clients and maintaining profitability by incentivizing them to invest the cashpiles.

Zombie companies refer to distressed companies whose cash flows are just enough to cover interest payments (interest coverage ratio of 1 or less). These companies have no ability to pay back principal on their debt and are kept alive by access to cheap borrowing and/or government support. Zombie companies have come into focus as the ongoing pandemic has pushed interest rates to record lows and has prompted governments to announce massive stimulus measures targeted towards corporates.

Deutsche Bank chief executive Christan Sewing said last week, “If one company out of every six in Germany becomes a ‘zombie’ because of rescue funds and delayed insolvency applications, then that will have serious consequences on the productivity of the (German) economy.”

“If you are a treasurer with debt due next year, why wouldn’t you do it?” said Higham. “Given what has happened with rates, it is not surprising companies think this is a great time to be issuing.”

“The issue now is you have to take so much duration or credit risk to get any kind of yield,” said Erickson. “It’s a very frustrating market to invest in.”

In a report by S&P

“Expansive monetary and fiscal support could lessen defaults over the near term, but, with basic revenues flagging, the proportion of ‘CCC’/’C’ issuers has risen sharply, raising default risk,” S&P wrote.

“It’s the specific risk of this crisis that has led the authorities to act so quickly. But instead of seeing an immediate wave of bankruptcies, we will probably now see a lag in corporate failures,” she said. “There is liquidity in the short term, but companies that don’t have good capital structures will logically default” later.

“If one company out of every six in Germany becomes a ‘zombie’ because of rescue funds and delayed insolvency applications, then that will have serious consequences on the productivity of the (German) economy,” said Sewing.

The Finance Ministry said it “is working to complete its funding plan, which includes an international bond and sukuk offering to fund the remainder of its needs this year.”

On the likelihood of inflation hitting 5% to 10% in the near future – Stan Druckenmiller, former chief strategist for George Soros

“Everyone loves a party but inevitably after a big party there is a hangover,” he said. “We are in a raging mania.”

“The government’s loans schemes have been highly effective at helping firms through the worst of the crisis, but they represent a double-edged sword in that they have weighed down firms with debt just as we need them to invest to spur the recovery,” Groom said. 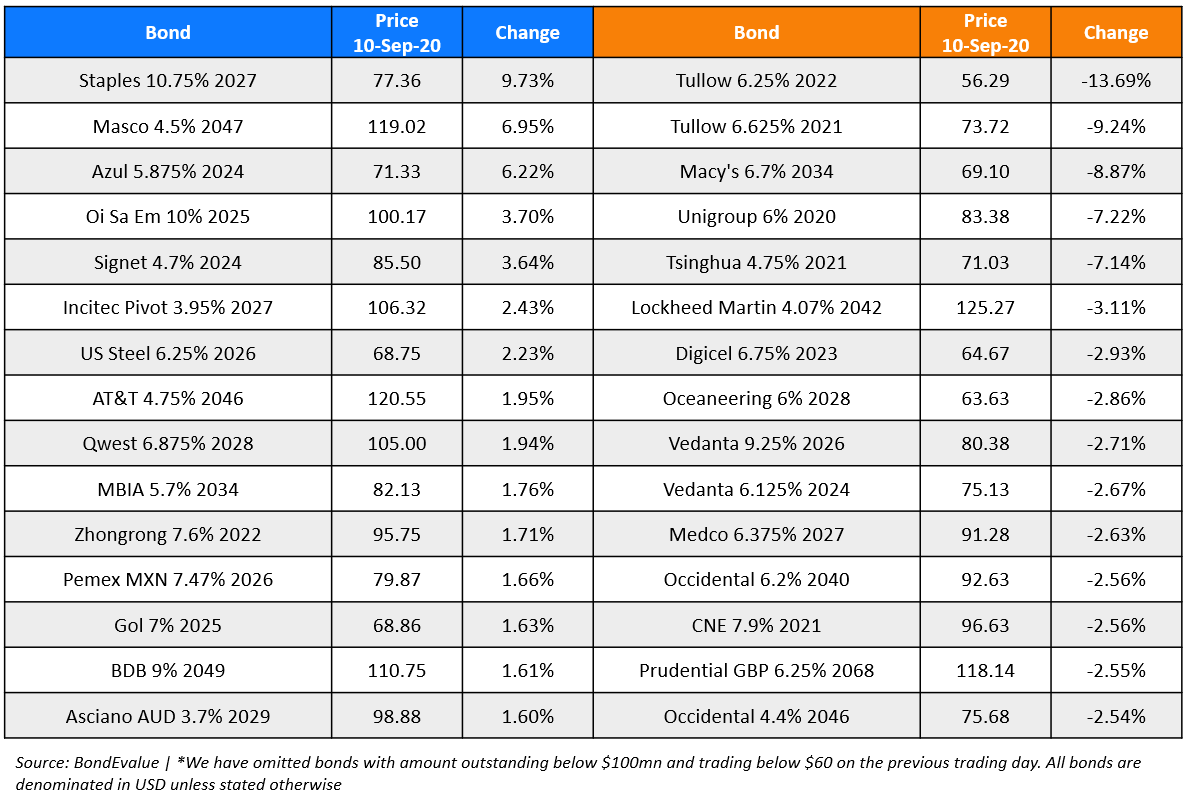