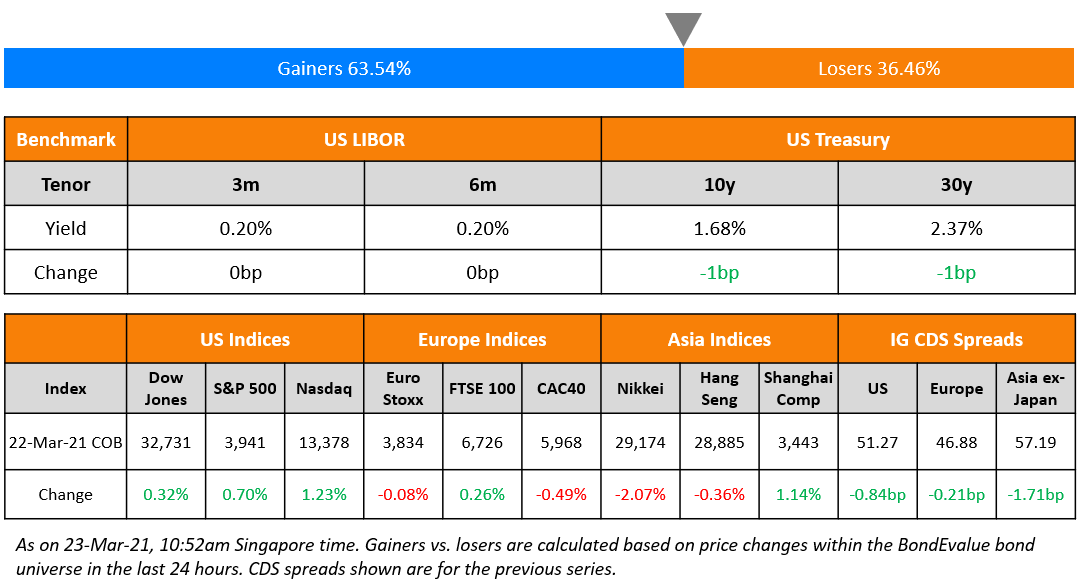 S&P ended 0.7% higher and Nasdaq was 1.2% higher with the US 10Y Treasury yield easing to 1.68%. European equities were marginally higher with the DAX, FTSE and FTSE MIB up over 0.2% while the CAC was down 0.5%. The Turkish Lira ended 8% lower – analysts said the central bank intervened to support the lira by selling foreign currencies; the lira was down over 17% at one point after President Erdogan sacked market friendly governor Naci Agbal over the weekend. With this, most Turkish dollar bonds were down over 10% on Monday. US IG CDS spreads were 0.8bp tighter and HY was 4.2bp tighter. EU main CDS spreads were 0.2bp tighter and crossover  spreads tightened 4.2bp. Asian equity markets have opened flat and Asia ex-Japan CDS spreads are tighter 1.7bp. Asian primary markets are set for a busy week with five new dollar deals launched today and a strong pipeline of bonds from AVIC, CAR Inc, Maldives and IRFC among others.

Keen to learn bond market fundamentals from industry professionals? Sign up for our Bond Traders’ Masterclass that consists of five modules starting with A Practical Introduction to Bonds tomorrow at 6pm SG/HK. Avail a 25% discount on a bundle of five sessions! 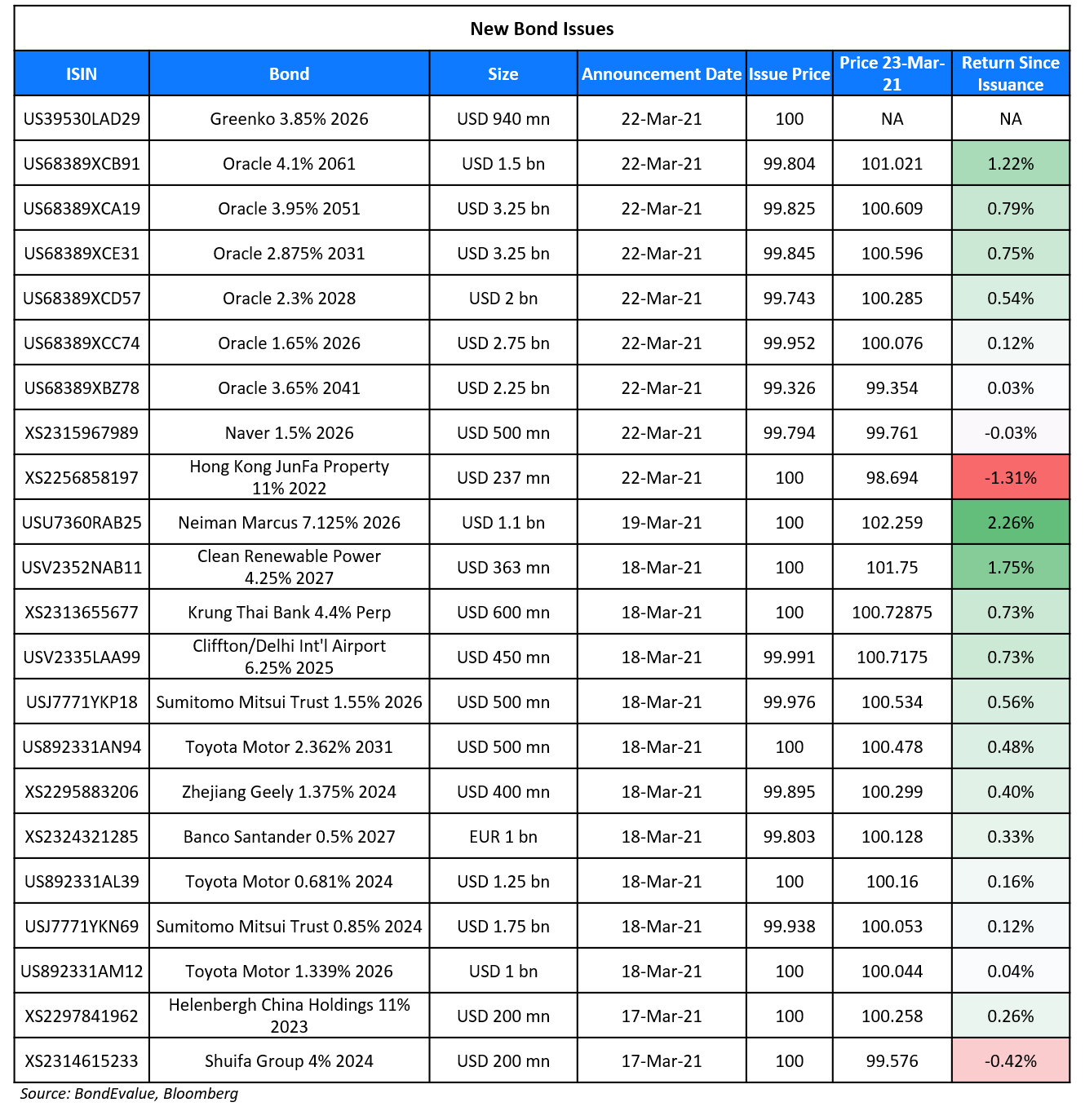 South Korean search engine Naver raised $500mn via a debut 5Y sustainability bond at a yield of 1.543%, or T+68bp, 22bp inside initial guidance of T+90bp area. The bonds have expected ratings of A3/A-. Proceeds will be used for financing or refinancing eligible projects under the company’s sustainable finance framework. Naver also operates in commerce, fintech, content and cloud businesses.

The bonds have expected ratings of Baa2/A. Proceeds will be used for general corporate purposes, including to repay its 2.80% 2021s, 1.90% 2021s, 2.50% 2022s and to pay accrued interest, and any related premiums, fees and expenses. General corporate purposes may also include stock buybacks, payment of cash dividends, debt repayment and future acquisitions.

Volcano bonds are a type of catastrophe bonds that offer dedicated insurance against volcanic eruptions. A bond sponsored by the Danish Red Cross will be the first to offer dedicated insurance against volcanic eruptions with a plan to raise $3mn. Bloomberg reports that “the payout uses a quantitative model to predict where funds will be needed based on the height of an ash cloud and prevailing winds after a volcanic eruption, but before the dust settles.” The bond will cover 10 volcanoes in Cameroon, Chile, Colombia, Ecuador, Guatemala, Indonesia and Mexico.

“The recovery has progressed more quickly than generally expected and looks to be strengthening,” Powell said. “But the recovery is far from complete, so, at the Fed, we will continue to provide the economy the support that it needs for as long as it takes.”

“There isn’t any big fundamental news to account for the move,” Maley said. “Instead, I think it’s merely that bonds have become very oversold on a short-term basis.”

“This week will be a test I think for the market because we’ll revisit the seven-year auction,” said Krosby. “But given that this is the end of March, given that this is the end of the quarter, you may see pension funds, particularly pension funds that re-balance their portfolios, perhaps take profit from their equity holdings and begin a bit of buying in Treasuries.

On Risk of China Outflows Along With Other EMs

“It’s just like drinking alcohol: you feel comfortable, but people worry about the after-effect,” he said. “When the stimulus is gone and the U.S. is back to normal, the aftermath will be very damaging to emerging market economies…it’s likely for the second half of this year to see a capital outflow…A lot of the investors are moving out of emerging market economies. China has emerging market characteristics, even though for the time being it is perceived as a stable market because of its relatively better performance in fighting Covid-19″

“Banks are under even greater pressure than last year to digest the bond issuance. The key issue here is that local governments lack funds, and the central government can’t let them be starved of it, therefore it can only let them roll the debt over”.

“You should see it (issuance) as a bullish sign for bonds this year, but bearish from a sector perspective on the supply in local governments versus sovereign.” 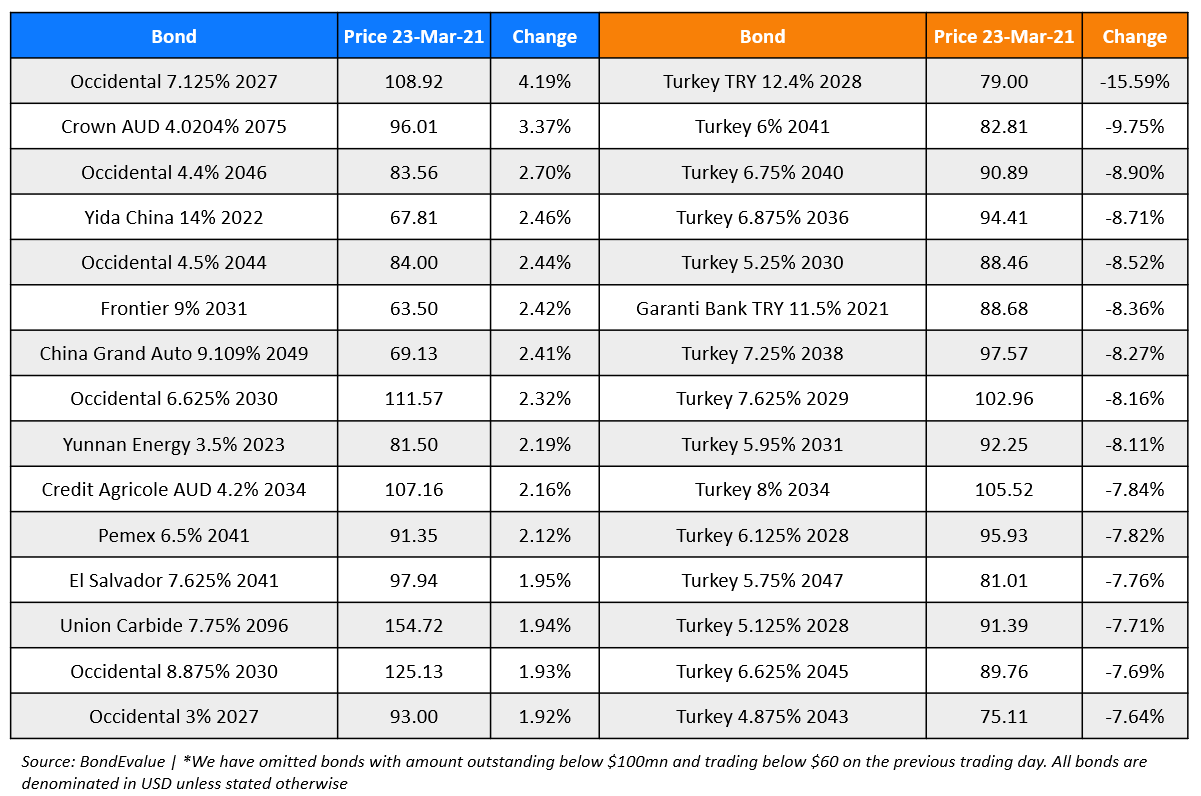