November 2020: 80% of Dollar Bonds In The Green on Vaccine Hopes 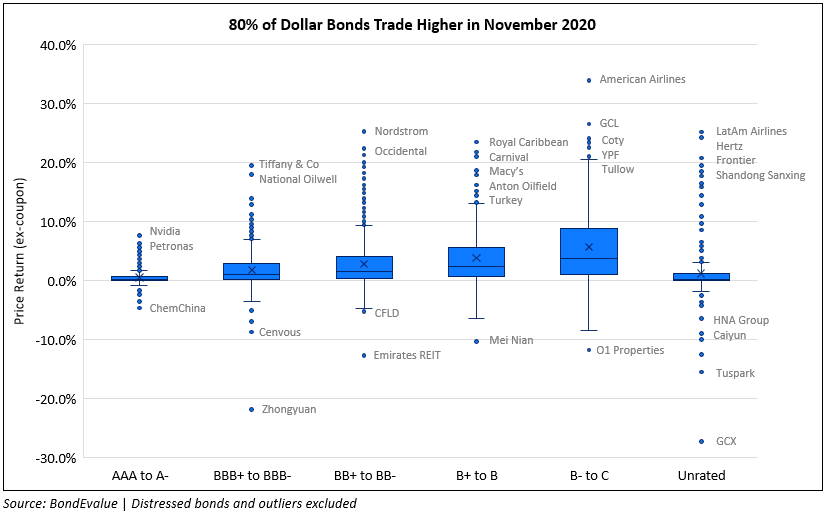 After a mixed bag in October, November saw a strong revival in demand for dollar bonds across the spectrum. Overall, 80% of the dollar bonds in our universe delivered a positive price return (ex-coupon). The box and whisker plot above shows how bonds moved in price terms (ex-coupon) in November – by credit rating. The horizontal line inside each of the six boxes indicates the median price return, while the box area above and below it represents the upper and lower quartile respectively. The dots that fall above and below the bounds are outliers with each dot representing a bond.

We can observe that cyclicals and those sectors/companies battered by the pandemic benefitted last month on the back of vaccine hopes as major pharma companies including Pfizer and BioNTech, AstraZeneca and Moderna announced highly effective results of its vaccine in advanced trials. Names like Carnival Corp, Royal Caribbean, American Airlines, Occidental, Macy’s  were beneficiaries as rotation trades gathered steam in the bond markets.

Both Investment Grade (IG) and High Yield (HY) performed well though the latter saw a higher share of gains. 89% of HY bonds in our universe delivered positive price returns in November vs. 75% for IG bonds. 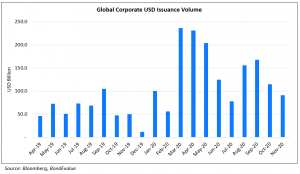 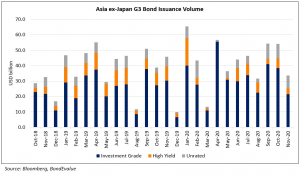 Below are the largest deals in November sorted by issue size. The largest issuances globally was topped by Verizon, which raised a jumbo $12bn across five tranches, which also marked the fourth largest USD corporate issuance this year, the top three being Boeing’s $25bn, Oracle’s $20bn and AT&T’s $12.5bn in April, March and May respectively.

The largest issuances across the APAC and Middle East were led by Saudi Aramco’s jumbo $8bn deal across five tranches and China’s EUR denominated issuance worth €4bn ($4.75bn) across three tranches. 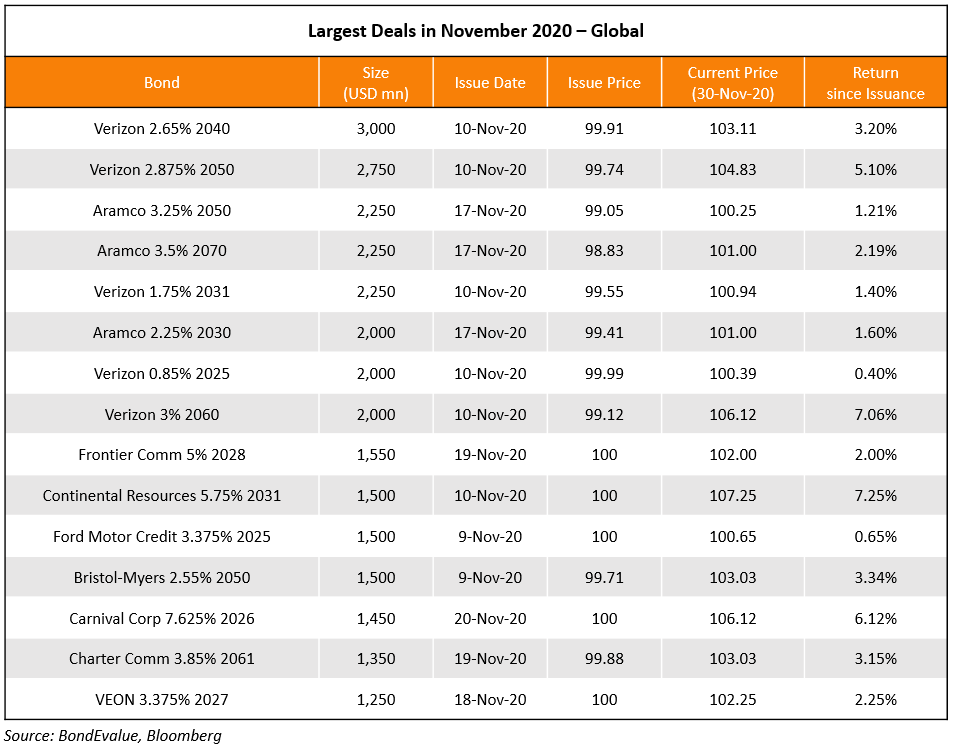 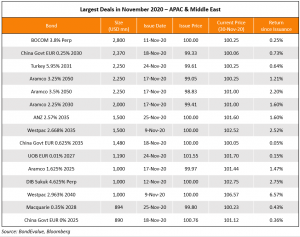 The gainers globally included names beaten down on the back of the pandemic such as American Airlines, Nordstrom, Royal Caribbean, Carnival and Macy’s that are now seeing hopes of a recovery. Top losers both globally and across APAC & ME saw Chinese names in the forefront after a spate of defaults by SOEs caught markets by surprise. Chipmaker Tsinghua Unigroup led the losers list falling ~60% in the month despite a recovery from lows of 20.88 over the last two weeks. Chinese real estate developers Greenland Global and China Fortune Land also saw its dollar bonds sell-off on concerns over local government’s having a stake in the companies.

Meanwhile, Future Retail’s bonds rallied 14% last month after having fallen ~19% in October as the deal with Reliance Retail finally got approval from the Competition Commission of India 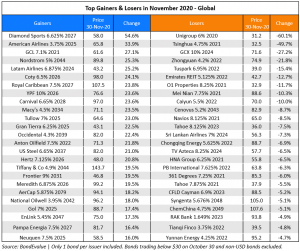 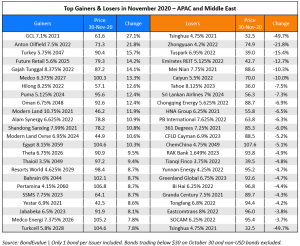