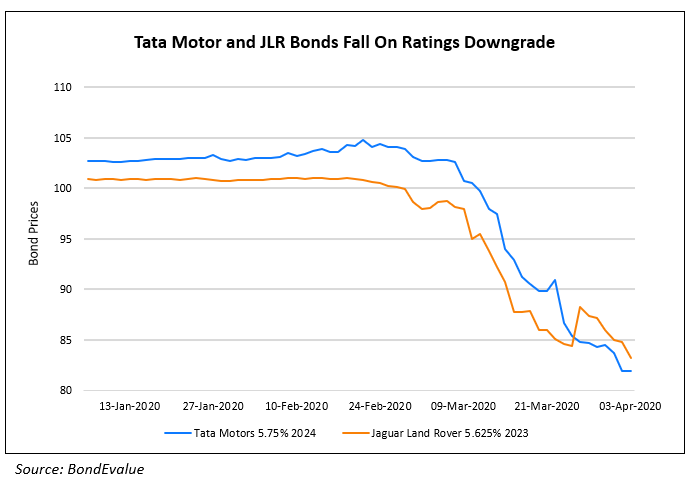 The tweet below by US President Donald Trump sent oil prices flying as chances increased of an agreement between Saudi Arabia and Russia to substantially cut oil production. Brent Crude’s June futures contract spiked from around $26 to $33 before settling back at $29 levels. This in turn led to an 8% rally in energy stocks and a modest 1.36% and 1.35% move higher for the DJIA and S&P. European stocks were also slightly higher with the FTSE and DAX higher by 0.47% and 0.27% respectively. Asian markets are opening mixed this morning with Topix and Nikkei up 0.9%, Kospi up 0.25% and Shanghai Composite down 0.25%. US index futures are opening down around 1%. 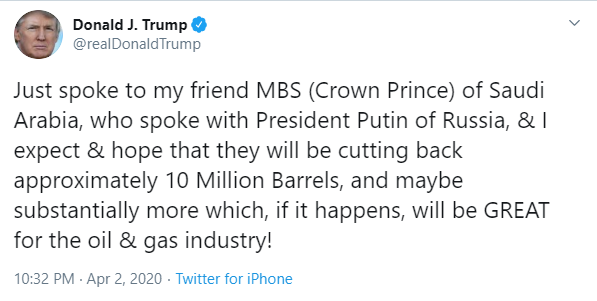 The oil price move overshadowed the terrible US Initial Jobless Claims number. It came out at a record 6.65 million vs an estimated 3.5 million and shattered last week’s 3.3 million number. Initial unemployment claims track the number of people who have filed jobless claims for the first time during the specified period with the appropriate government labor office. This number represents an inflow of people receiving unemployment benefits. To give an idea of the scale of this number, the last two weeks saw more jobs lost (10 million) than the entire 8 million jobs lost during the 2008/09 GFC.

Today, we have the US Non-Farm Payrolls number coming out later. This indicator measures the change in the number of employees on business payrolls. The median estimate is -100K, but the range of estimates vary from +100K to -4,000K. Important thing to note here is that the last reference week for this data ended just before business closures, employee layoffs and furloughs became more widespread. The April number to come out next month will show the real horror. There are a few reasons to take today’s number with a pinch of salt.

Ending a five week run of outflows, the week ended Wednesday, April 1 saw a record $7bn inflow into mutual funds and ETFs that invest in junk bonds. Inflows were led by $5.9bn into US junk bonds. The extent of government and central bank stimulus, appetite for new deals and rising oil price would explain this since a big chunk of the junk bond market is energy companies. It seems that investors expect the Fed’s plan to buy IG bonds may have a positive effect on the junk bond market. The recent offering by Yum Brands was several times subscribed, which indicated good demand from yield hunters.

Tata Motors and its British-based subsidiary JLR were downgraded by S&P from B+ to B. S&P expects a drop of 60K in sales for JLR in the current financial year. JLR joins other brands like BMW, Ford Motor, Toyota, Nissan and Honda that were cut by Moody’s last month. Mercedes parent Daimler, Groupe PSA, Renault, Volkswagen and JLR were put on notice by Moody’s.

Fitch Ratings has revised HSBC Holdings Plc Outlook to Negative from Stable, while affirming the Long-Term Issuer Default Rating (IDR) at A+ citing the economic disruption driven by the coronavirus pandemic.

Qatar To Raise $5bn As Early As Next Week

Looking to shore up its finances, the gas-rich gulf state is planning a bond issuance to support its finances, given the low oil prices and the impact of the virus weighing on its economy. It has given the mandate to banks including Standard Chartered, JPM, Barclays and Deutsche Bank. Qatar will join Israel, as only a handful of high-rated emerging market governments are braving the dollar bond market in recent weeks. Time will tell if the recent move in oil prices change anything.

“The change in outlook to negative reflects Agile’s weakened credit metrics because of its increased debt to fund its expansion. While we expect the company’s credit metrics over the next 12-18 months will gradually improve, they will continue to position the company at the weaker end of its Ba2 CFR,” says Kaven Tsang, a Moody’s Senior Vice President. “The negative outlook also reflects the uncertainty over the company’s ability to execute on its deleveraging plan in view of the challenging operating environment,” adds Tsang. The rapid and widening spread of the coronavirus outbreak, deteriorating global economic outlook, falling oil prices, and asset price declines are creating a severe and extensive credit shock across many sectors, regions and markets. Additionally, Moody’s expects Agile will control its debt growth over the next 12-18 months by scaling down acquisitions. Moody’s expects the company will spend around RMB35-40 billion, or around 30% of its pre-sales proceeds, to acquire new land and other non-property development businesses in 2020 and 2021. 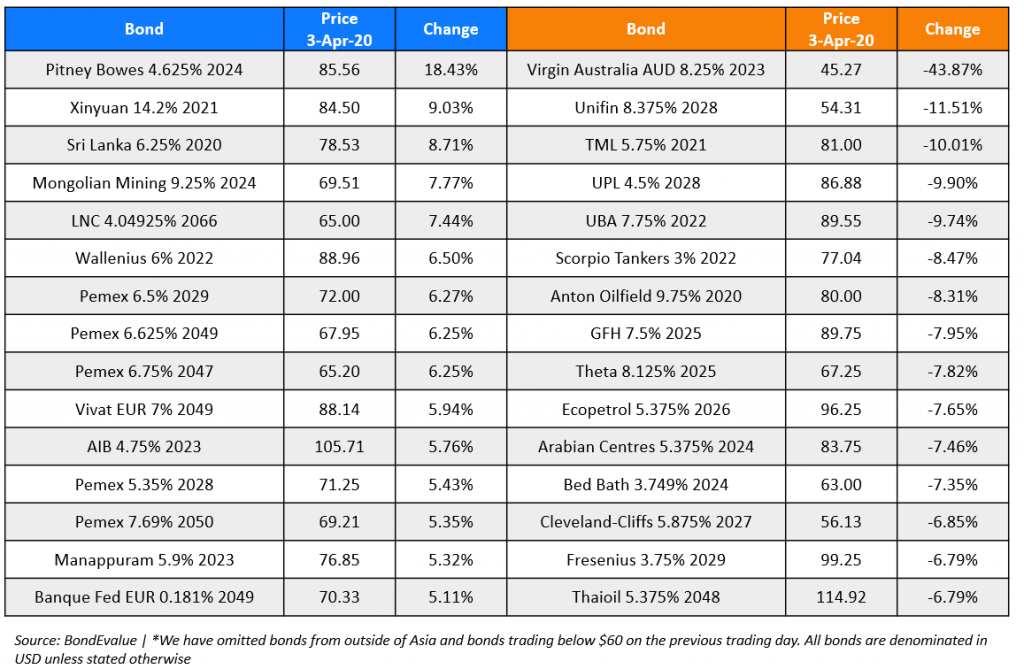 Moody’s Investors Service says in a new report that as debt becomes more expensive and EBITDA deteriorates in a coronavirus-led downturn, Chinese property developers that have lowered the fixed-charge coverage ratio (FCCR) under their debt incurrence tests ($1 debt test) are better able to preserve capacity to incur debt. “The average FCCR threshold used by Chinese property developers has declined over the years, and it is now easier for these companies to incur debt than during the 2015 slowdown,” says Jake Avayou, a Moody’s Vice President and Senior Covenant Officer.

In 2019, 48% of Chinese property bonds used a FCCR threshold – EBITDA/interest expense – of 2.25 times or lower, compared to 34% in 2018 and 18% 2017, while all bonds had thresholds of at least 2.50 times in 2015 and 2016. “Even if EBITDA deteriorates such that a property developer no longer satisfies the FCCR threshold, it can still incur debt under debt carve-outs, which are exceptions to the FCCR test,” adds Avayou. Average debt carve-outs for Chinese property bonds increased to 33% of total assets in 2019 from 27% in 2015.

As companies struggle with the impact from the coronavirus, they may need to loosen debt covenants further, especially those with already limited headroom under their thresholds. While incurring new debt will help some developers withstand a liquidity crunch, taking on potentially expensive debt will increase the debt burden of weaker developers and may prove unsustainable.

The higher the exposure to foreign capital flows, the bigger the move in the currency irrespective of whether times are good or bad. This is the case with the Indonesian Rupiah that topped the best performing currencies in Asia in 2019 along with the Thai Baht. The Rupiah has moved lower by 16% and is now approaching its 1998 level. In the case of the Baht, it is the reliance on Chinese tourist spending that has caused the pull back. The Baht has dropped 9% so far erasing all of the gains in 2019. 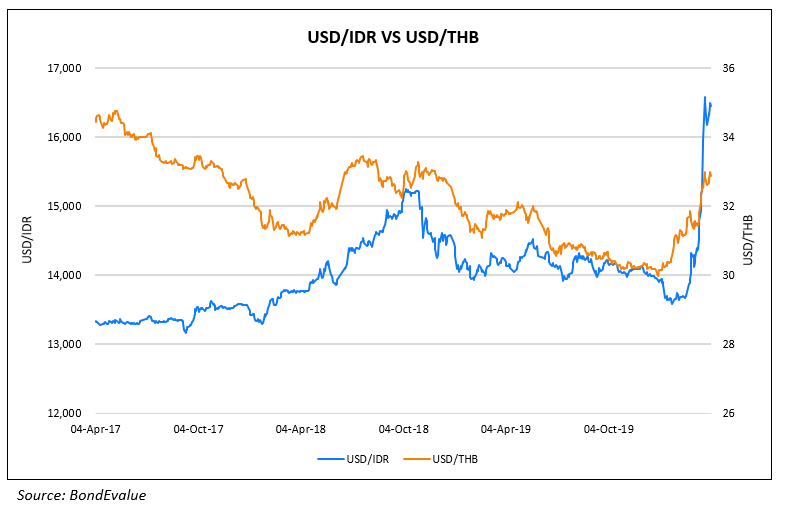