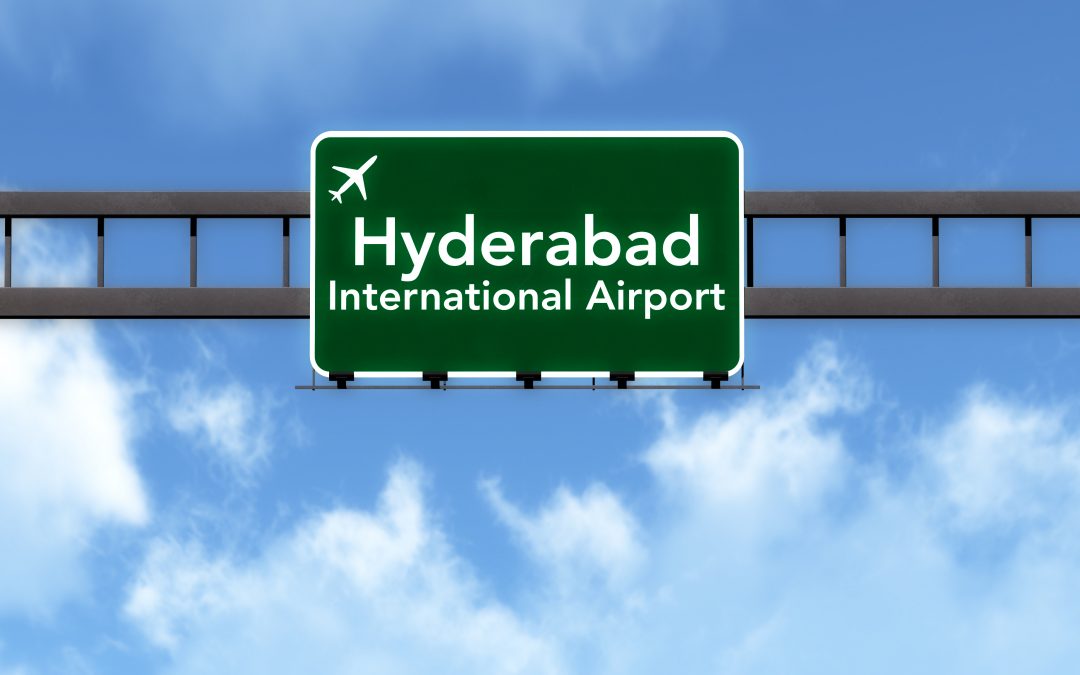 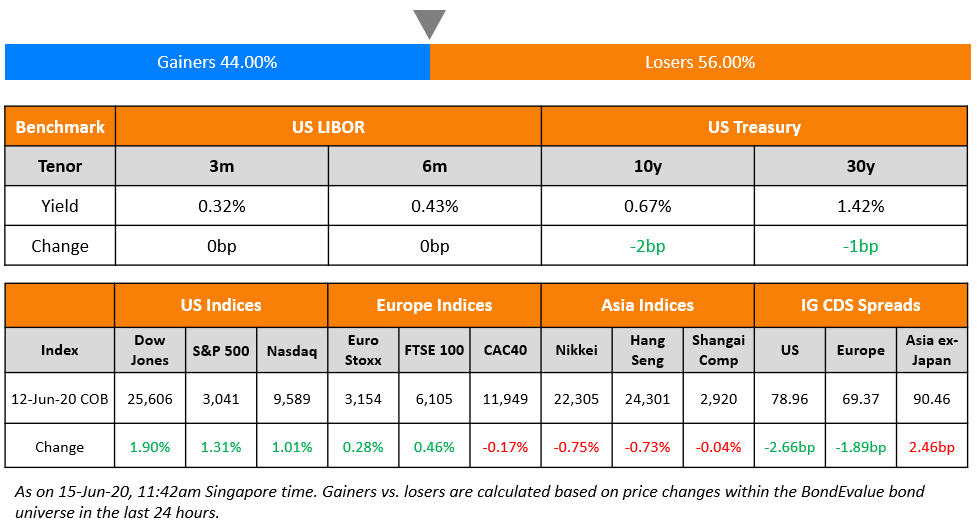 Last week ended with a positive tone despite Thursday’s huge drop across the board. Markets are still cautious this morning and doubts over a quick recovery persist especially with news coming out over the weekend about rising coronavirus cases in some US states. To add to this, there was a jump in new infections in Beijing leading to a shutdown of parts of the city. Asian markets are opening lower and US index futures are indicating that a big chunk of Friday’s gains have been given up. Dollar spreads in Asia were little changed over last week and saw decent issuance volume. Investors will be looking at upcoming economic data like May’s Chinese retail sales and industrial production data for further guidance. 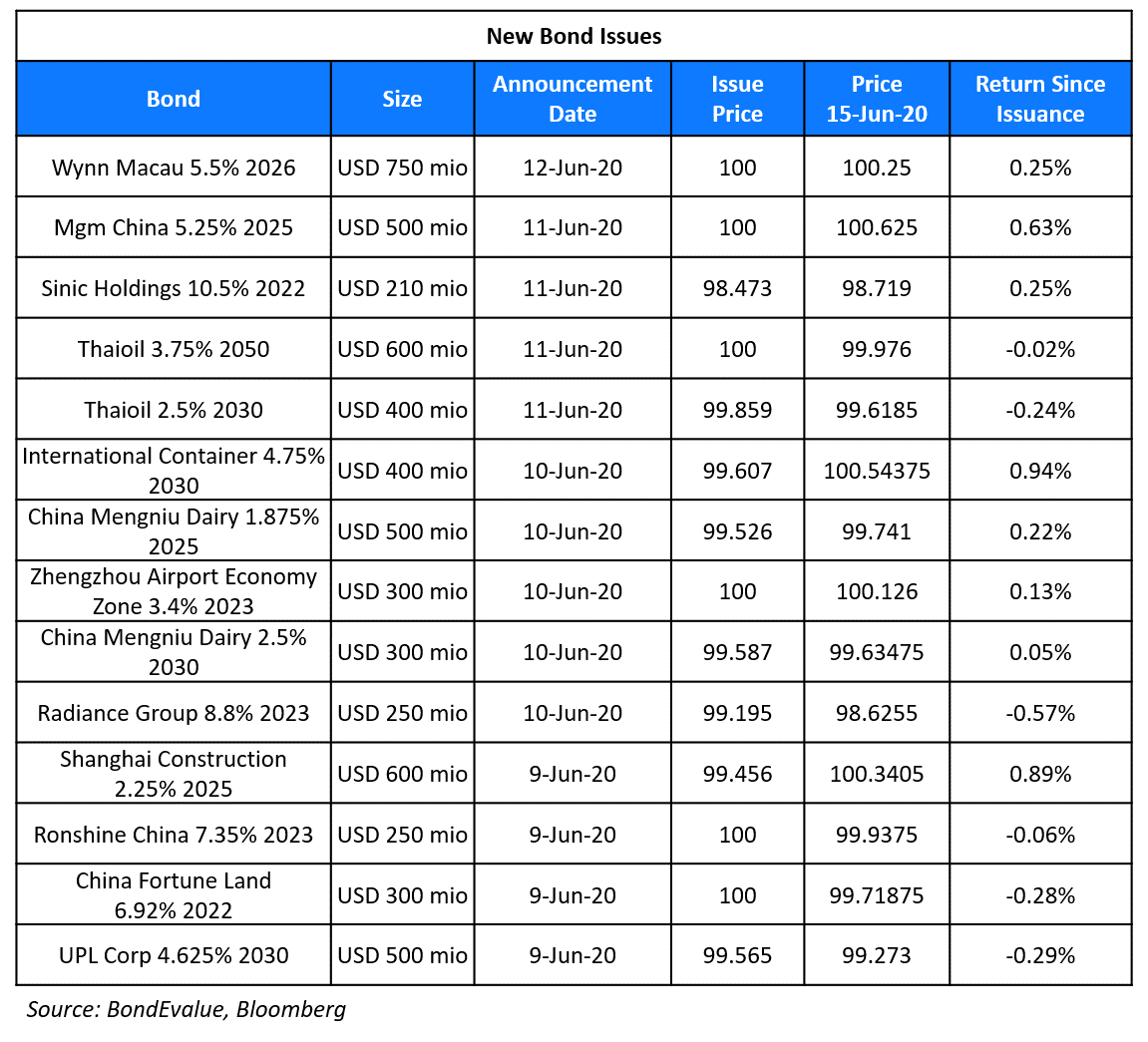 JetBlue Airways Corp.’s Proposed Term Loan Due 2024 Lowered To ‘B+’ On $250 Million Upsize

On Friday, Moody’s downgraded Hyderabad International Airport Limited (HIAL) to Ba2 from Ba1 and the outlook has been revised to negative from rating under review. Hyderabad is run under a public-private partnership between the government and GMR and the airport is being expanded under a contract worth ₹55bn ($724mn). The downgrade has been driven by Moody’s forecast of lower Funds from Operations (FFO) and debt based on financial metrics, which include the 2020 tariff cut implementation, additional debt requirements for the expansion of the airport and reduced traffic as a result of the pandemic even as domestic travel limps back. HIAL had cash in hand of ₹8bn ($105mn) and short term investments of ₹9bn ($118mn) in April, which are likely to see the airport through till the end of the ongoing financial year. Fitch had affirmed a rating of BB+ for the airport on Apr 1. While Hyderabad airport was downgraded, Delhi Airport’s rating of Ba3 with a negative outlook was affirmed by the credit rating agency. Moody’s had earlier downgraded Delhi to Ba3 on Mar 25 and had placed the rating on review for a further downgrade. The airport industry has been severely hit due to the far reaching effects on the travel and airlines industry. The low oil prices and asset price declines have only added to the woes.While GMR HIAL’s 5.375% bonds due 2024 remained largely unchanged, its 4.25% bonds due 2027 traded lower by 0.3 points to 88.6 cents on the dollar currently.

Philippine companies are staring at bond and loan maturities of $8.3bn in the second half of this year and a staggering $16.4bn next year, according to a Bloomberg story. The looming maturity wall coupled with low interest rates is expected to lead Philippine corporates to tap the primary bond markets to raise funds. As per the Bloomberg story, Ayala Corp., JG Summit Holdings and San Miguel Corp are looking to raise an aggregate of $2.5bn in bonds. Philippine port operator ICTSI reopened the primary dollar bond market for Philippine issuers last week when it raised $400mn via 10Y bonds. This was the first dollar bond issuance from a Philippine company in about five months, with the last deal by Jollibee in January. “We expect to have a very busy next couple of months, and hopefully the second half of the year will retain the momentum,” said Ryan Martin Tapia, president of China Bank Capital Corp., one of the country’s most active bond arrangers. 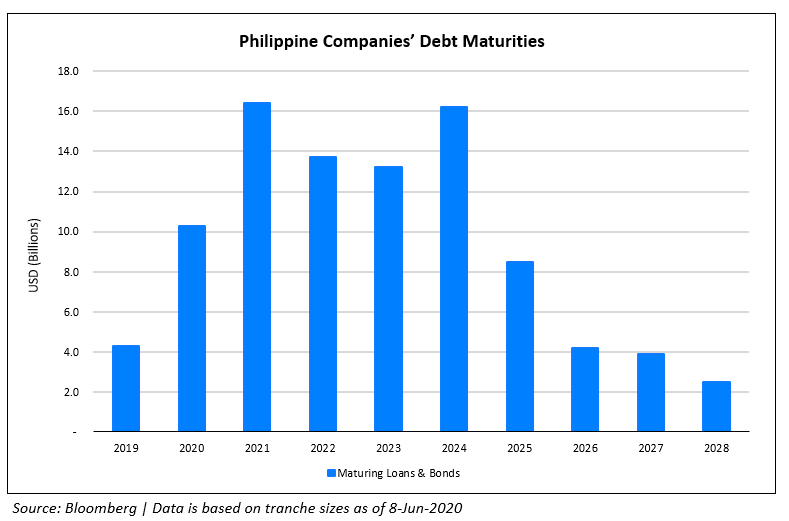 One of the key concerns among Additional Tier 1 or contingent convertible (CoCo) bondholders is whether the bonds will be called on their first call date. The norm was for these bonds to almost always get called, however there have been cases over the past few months (Deutsche Bank, Oman’s Dhofar Bank, Bahrain’s Ahli United Bank) where the issuers decided not to call the bonds as it was more economical to not redeem the bonds. AT1s typically carry a coupon reset if the bonds are not called on their first call date. We have compiled a list of US dollar and Euro denominated AT1s that have call dates within the next one year. In the table below, we have listed these bonds along with their coupon reset formulas, coupon reset based on current index levels, difference from the current coupon – sorted by year-to-date (YTD) price return (ex-coupon).

It is interesting to note that all the AT1s in the table above delivered a negative price return (ex-coupon) since the start of the year. Looking at the Difference (bp) column, we can see that all but one bond’s coupon reset is lower than its current coupon, based on current index levels. This tells us that, assuming reset index levels remain the same till their first call date, it is more economical for all but one issuer to not redeem these bonds. The current prices of these bonds does not seem to price in this risk as they are trading very close to par.

In the UK, mark-to-market (Term of the day, explained below) losses on the bond holdings of six large insurance companies have increased to a whopping £28bn ($35bn) as per analysis by a former insurance regulator. However, such losses can be cushioned by the insurance companies. The regulatory concessions under European legislation available to UK insurers allows them to discount the mark down on their bond’s value. Although, bringing these losses to the books of finance would be detrimental, discounting these with a process called matching adjustments could come with a potential of subsequent default or downgrade to junk at a later date.

In case of banks, a reduced cash flow would directly affect its bond prices and credit ratings. The story is a little different for the insurance companies. Even though the bond holdings of insurance companies are marked down with the market, the yields on the same could be much higher. This is due to regulatory concessions allowing them to discount their future liabilities at a higher rate through a process called “Matching Adjustments”. Let us understand this through an example. A shock like CoVid-19 could lead to reduced cash flows even for Insurers. In such a scenario, the insurer would need to recognize a loss on the asset side on the back of falling bond prices. However, Insurers are allowed to discount their future insurance liabilities at a higher rate, thus reducing the present value of these liabilities. So essentially, the lower asset values are matched by lower present values of liabilities.

As reported by the Financial Times, this “masking” of MTM losses on bond holdings against lower present values of future liabilities is a concern and can lead to large future write-offs if the MTM losses on its bonds become permanent led by defaults or downgrades.

Hertz Attempts to Sell Shares Worth $1bn While in Bankruptcy

Hertz is piggybacking on the burst of enthusiasm in the stock market, and has now been given approval to sell up to $1bn of new shares despite filing for bankruptcy protection in May. The company has $18bn of debt, largely in bonds secured against its hundreds of thousands of vehicles. The buying frenzy led its stock to gain more than 800% by Monday from its low on May 26, the first trading day after its bankruptcy filing. Following this sale of shares, Hertz bonds traded higher yesterday, with its 5.5% and 6.25% bonds due 2024 and 2022 up by 9.98 and 4.75 points to trade at 45.85 and 42.25 respectively.

BDO is monitoring the market “to assess whether longer-term funding solutions may be warranted to better secure our liquidity needs, such as a reissuance of the bonds, given that interest rates at the moment are at much lower levels.”

This is the opportunity to lock in lower borrowing costs and lengthen the debt maturity profile, especially since the builder has managed to keep its local credit rating. Ayala Land could raise as much as 19 billion pesos through a debt capital market transaction or a bilateral loan facility before the year-end to refinance and prepay certain debts.

The bank will continue to tap the domestic bond market and look at the international debt market as well to diversify its funding base. The liquidity in the market “gives a positive landscape in issuing medium-term funding.”

On conflicting interest of owners/managers of insurance companies vs. policyholders – Davide Rule, ex-head of insurance supervision at the UK watchdog

“Owners share the benefits of taking more risk in a good outcome but have limited exposure to losses in a bad outcome because of limited liability.” Mr Rule thought the structure of regulation did not exacerbate this conflict. Coronavirus may subject that belief to a sterner test. 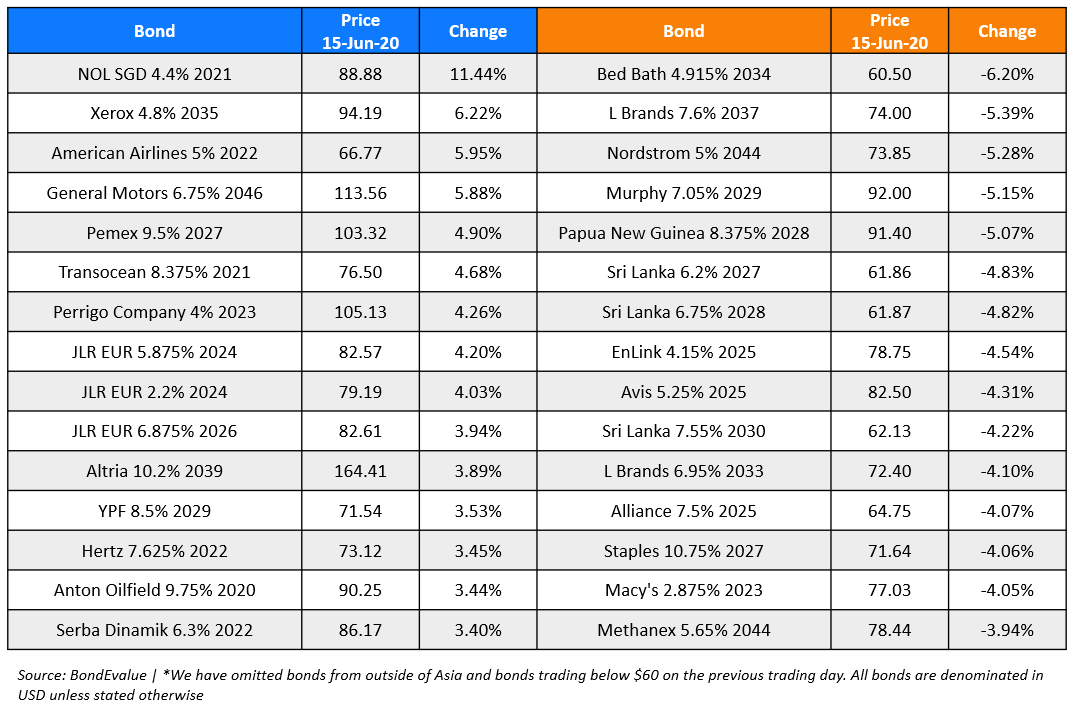