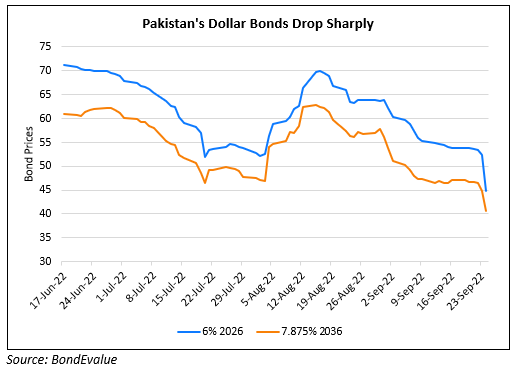 Pakistan’s dollar bonds fell by 6-10 points across the curve after its Prime Minister Shehbaz Sharif said that “all hell will break” if they do not get a “substantial relief” on their debts. He said that Pakistan has spoken to European and other leaders in the Paris Club to help them get a moratorium. Thus, Reuters notes that the nation was seeking debt relief from bilateral creditors, emphasizing that the government would not seek any relief from commercial banks or bondholders. Kadir Hussain, head of fixed income asset management at Arqaam Capital Ltd. said, “The market was expecting the 2022 bond will be paid, but these comments imply that there is a strong risk of a restructuring or default”. Pakistan’s USD 5.625% sukuk due December 2022 dropped by 6.1 points to 86.87 following the PM’s comments.

Besides financial turmoil, the nation has also been hit by devastating floods that have further strained its finances. Currently, Pakistan’s foreign-exchange reserves stand at $8.3bn, less than two months of import cover. Pakistan’s Finance Minister Miftah Ismail earlier last week said that the nation will not default on its debt despite the floods. In the latest update, the finance minister said in a tweet that he would submit his formal resignation this week.