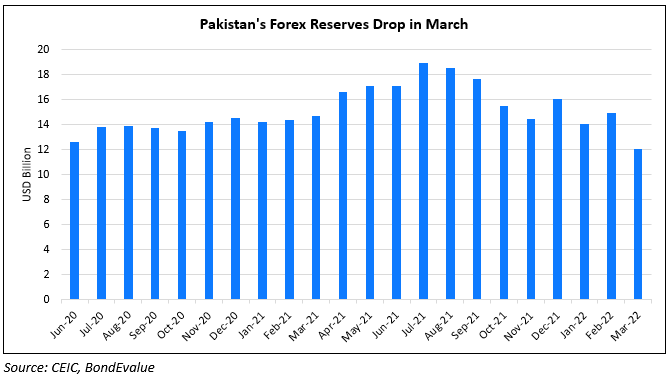 Pakistan’s liquid reserves held by the Pakistan central bank, State Bank of Pakistan (SBP) fell by 19.5% weekly to $12.04bn, as of March 25, as per central bank data release. The SBP’s reserves are at its lowest since mid-2020. Overall, the nation’s liquid foreign exchange reserves dropped to $18.56bn as of March 2022, down 13% on a weekly basis. The country’s total foreign exchange reserves decreased by $5.4bn to $18.55bn in Q1 22 against $24bn as of end-December 2021. This decline is attributed to the repayment of external debt as a syndicated loan facility from China. SBP now expects the loan to get rolled over as negotiations are in progress.

Pakistan’s current account deficit for February improved sharply, down 78% to $545mn, against $2.53bn in January 2022. This was helped primarily by a drop in imports and also a tick higher in exports of goods and services. News wires note that the government is making efforts to maintain the reserves at a sustainable level by rescheduling the foreign debts, increasing remittances and exports.