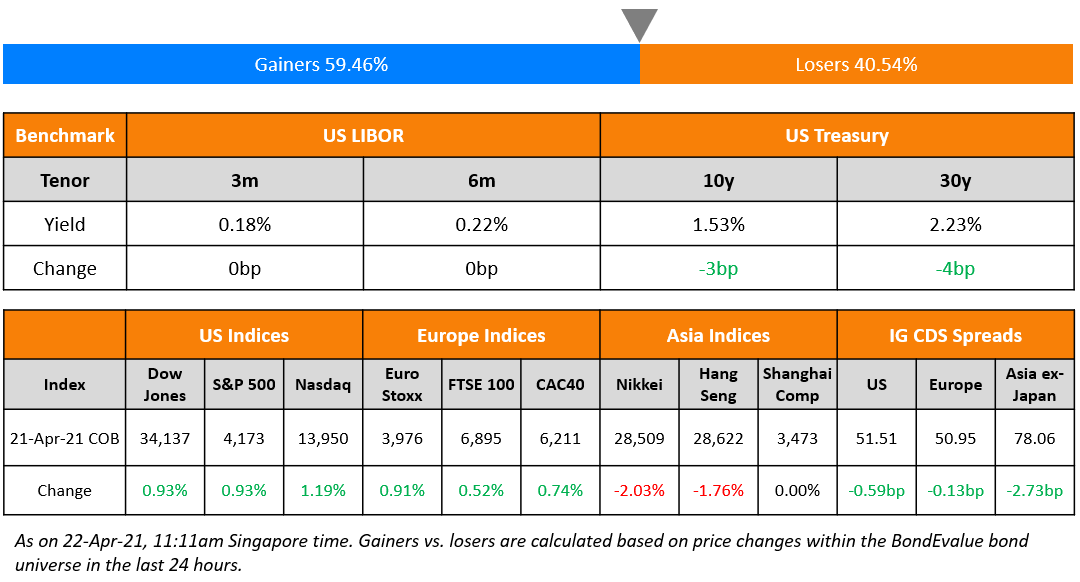 The S&P rose 0.9% while Nasdaq was up 1.2% as equities recovered from two straight days of losses. Small-cap stocks rallied over 2%, bringing 2021 gains for the US small-cap index, Russell 2000 to more than 13%. European equities also inched up with DAX, CAC and FTSE rising 0.4%, 0.7% and 0.5% respectively. US IG CDS spreads tightened by 0.6bp and HY tightened 1.9bp. EU main CDS spreads and crossover spreads narrowed by 0.1bp and 2.0bp respectively. Asian equity markets are 0.6% higher and Asia ex-Japan CDS spreads narrowed by 2.7bp. 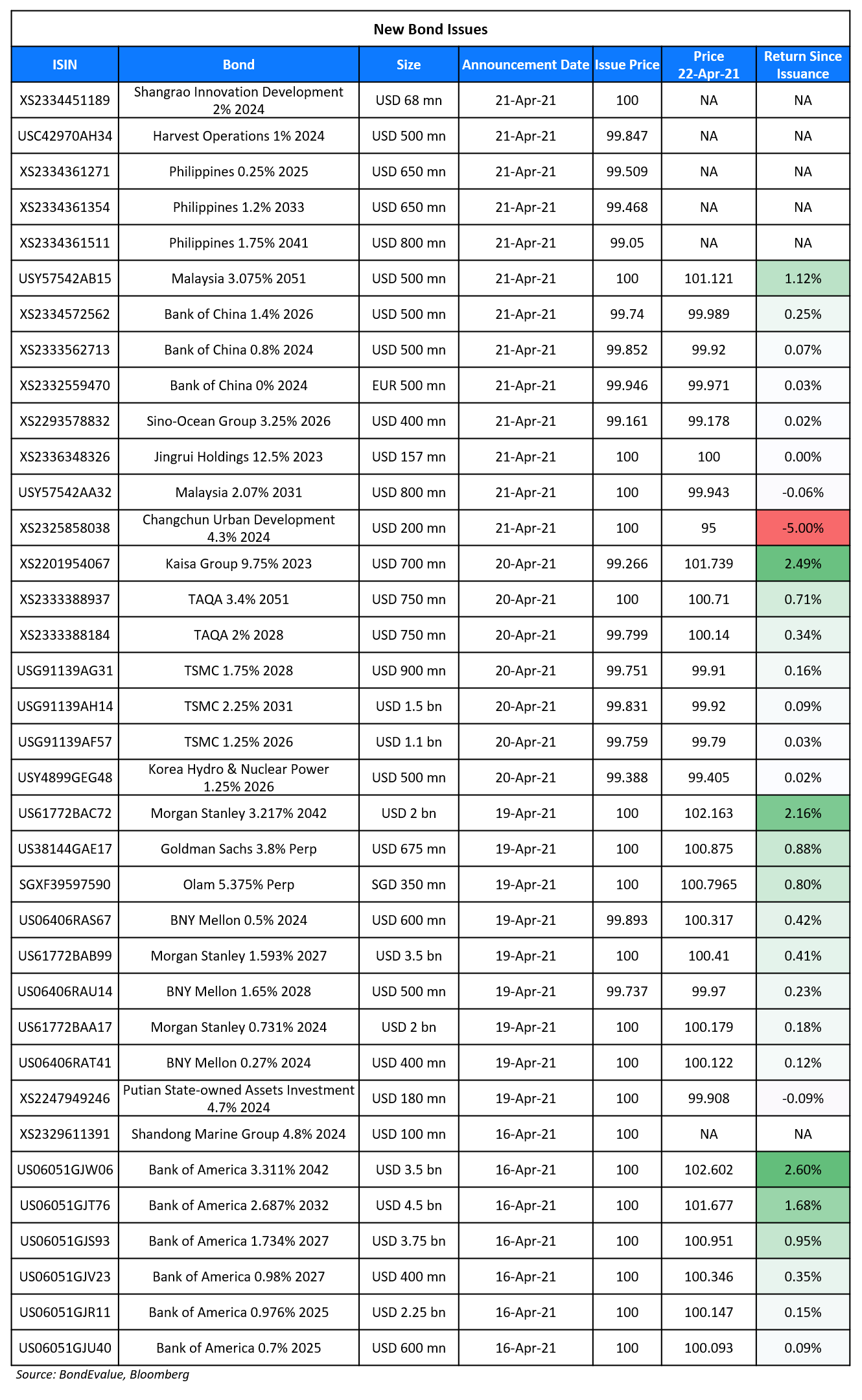 Sino-Ocean Group raised $400mn via a 5Y green bond at a yield of 3.434%, 40bp inside initial guidance of T+305bp area. The bonds have expected ratings of Baa3/BBB-, and received orders over $2.1bn, 5.25x issue size. Wholly-owned subsidiary Sino-Ocean Land Treasure IV is the issuer with a guarantee from the parent. Proceeds will be used to repay debt of the guarantor and its subsidiaries that are due in 1 year, in accordance with its green finance framework.

Changchun Urban Development raised $200mn via a 3Y bond at a yield of 4.3%, 20bp inside initial guidance of 4.5% area. The bonds have expected ratings of Baa1/BBB+. The bonds will be issued by wholly-owned subsidiary Chang Development International and guaranteed by the parent. Proceeds will be used for general corporate and refinancing purposes.

KNOC subsidiary Harvest Operations raised $500mn via a 3NC1 bond at a yield of 1.052%, 27bp inside initial guidance of T+100bp area. The bonds have expected ratings of Aa2/AA. Proceeds will be used for repaying guaranteed notes due in April this year and maturing credit facilities as well as for general corporate purposes.

Jingrui Holdings raised $157mn via a 2.5Y bond at a yield of 12.5%, in line with final guidance of 12.5%. The bonds have expected ratings of B-, and proceeds will be used to refinance existing debt.

Shangrao Innovation Development Industry Investment Group raised $68mn via a 3Y credit-enhanced bond at a yield of 2%, 30bp inside initial guidance of 2.3% area. The bonds are unrated and proceeds will be used for industrial park construction and general working capital.

Initial price guidance (IPG) refers to the proposed yield on a new bond issue. Let’s take the example of the new Sino-Ocean 5Y green bond priced on Wednesday to understand this term better. The bond was launched yesterday at an IPG of T+305bp area or 3.05% over the current 5Y Treasury yield, which tells investors that Sino-Ocean is planning to offer a yield of around (area) 3.84% (5Y UST of 0.79% + 3.05%) on its new 5Y bonds. Based on the IPG, investors will place orders with the lead managers of the new bond issue. Once the lead managers have received orders for the proposed bond, they will decide the final pricing on the bond, which in most cases will be tighter (lesser) than the IPG. In the case of Sino-Ocean, the final pricing came in at 3.434%, which is ~40bp inside (lower) than the IPG. The extent of tightening (lowering) of the final pricing on a new bond is a gauge of the demand for that bond – greater the tightening, greater the demand. For context, the orders for the Sino-Ocean bonds reached over $2.1bn, 5.25x issue size.

On conservative policymakers urging European Central Bank to lay ground for tighter monetary policy
Jens Weidmann, head of Germany’s central bank
“The emergency monetary policy measures must not be permitted to persist indefinitely,”  Weidmann said. “They need to remain closely linked to the crisis and come to an end once the pandemic is over.” “We might have to contend with stronger inflationary forces again in the future.” “There can be no lack of determination, even if rising interest rates increase countries’ borrowing costs. This is important for the credibility of monetary policy.”
Klaas Knot, head of the Dutch central bank
“From the third quarter onwards we can begin to gradually phase out pandemic emergency purchases and end them as foreseen in March 2022.”
Frederik Ducrozet, strategist at Pictet Wealth Management
The ECB council “only agreed to this front-loading of bond-purchases on the condition that they would be reduced again in the third quarter and that PEPP is not expanded again”. “The market can handle an exit from PEPP,” he said.
Katharina Utermöhl, an economist at Allianz
“These are trial balloons being floated by the hawks to see how the market reacts,” said Utermöhl. “But it is odd for the ECB to fuel discussion about this at a time when we are lagging so far behind the US, and even there the Federal Reserve is still pushing back against any suggestion of tapering.”
Maria Demertzis, deputy director of think-tank Bruegel
“If inflation were to come back sustainably it would put the ECB in a very difficult position because we would still be in a very weak recovery and it would put the onus much more on fiscal policy with an increased risk of financial market fragmentation.”
On the possibility of Emirates Airline approaching government for cash or take on more debt – Tim Clark, Emirates Airline President
“As far as Emirates is concerned, we are good for another six, seven or eight months in terms of cash, we have sufficient cash coming in to be able to keep the day to day operations at a neutral basis,” he said. “But like everybody else, if in six months, global demand is where it is today, then we’re all going to face difficulties, not just Emirates.” “The balance sheet is pretty strong regardless of what’s already happened, so we’re ok there. There are other measures we could take so we are preparing ourselves for that case.”
“Well, frankly I’m not particularly concerned what comes out of Doha. I would rather we concentrated on what we need to do best for ourselves.” “What we would like to see as part of this pandemic, when it is over, is that the airline industry restores itself to health, restores itself to the competitive nature of the way it was, consumers have choice and value for money,” he added.
On JPMorgan caught up in Europe’s big soccer league blunder
Steve Greenfield, a professor of sports law at the University of Westminster
“It didn’t seem co-ordinated and almost didn’t seem thought through,” said Greenfield. “It was business-based and lost sight of the sporting connotations.”
Kieran Maguire, lecturer in football finance at Liverpool University
“JPMorgan’s client base is mainly corporate rather than personal, so I don’t see them suffering,” said Maguire. “They will be seen as facilitating rather than driving the project.”
On airlines facing another bleak year as outlook worsens – Willie Walsh, director-general of Iata
“This crisis is longer and deeper than anyone could have expected. Losses will be reduced from 2020, but the pain of the crisis increases,” said Walsh. “There is optimism in domestic markets where aviation’s hallmark resilience is demonstrated by rebounds in markets without internal travel restrictions. Government imposed travel restrictions, however, continue to dampen the strong underlying demand for international travel. Despite an estimated 2.4 billion people travelling by air in 2021, airlines will burn through a further $81 billion of cash,” Walsh said. “Most governments have not yet provided clear indications of the benchmarks that they will use to safely give people back their travel freedom,” said Walsh. “Effectively restarting aviation will energise the travel and tourism sectors and the wider economy. With the virus becoming endemic, learning to safely live, work and travel with it is critical. That means governments must turn their focus to risk management to protect livelihoods as well as lives,” he added. 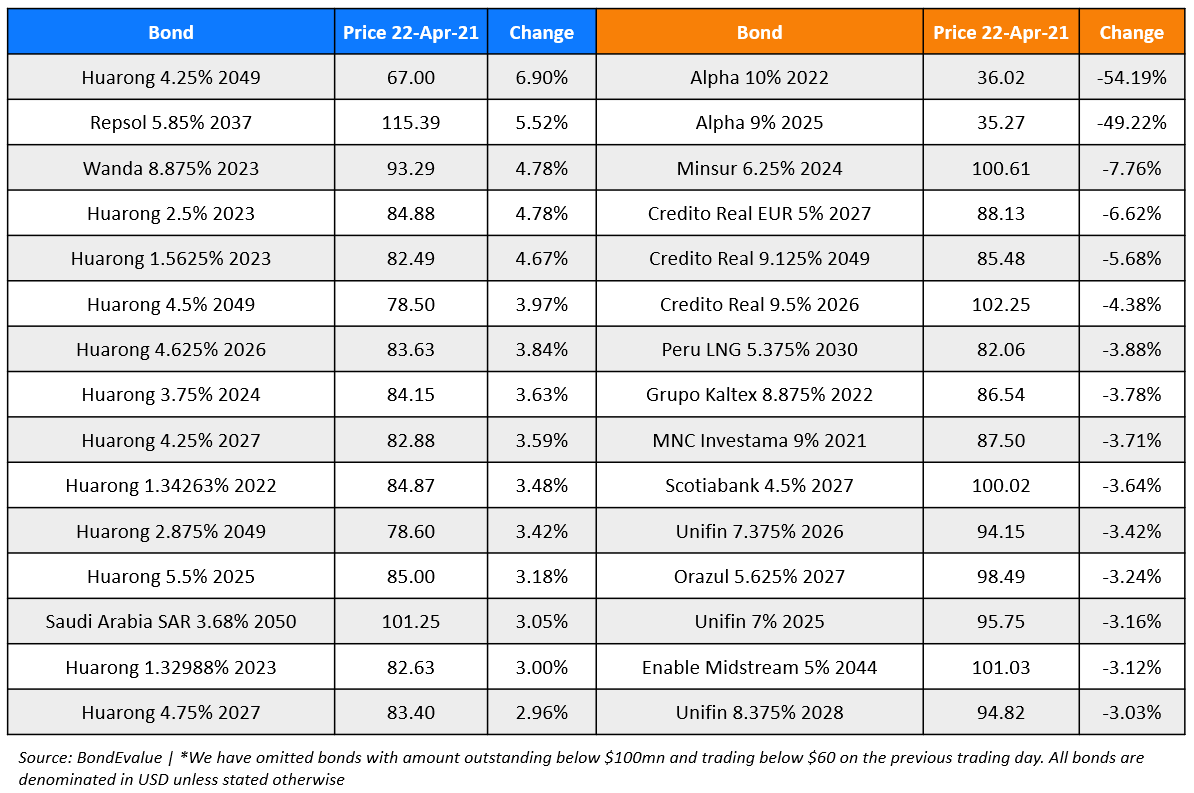