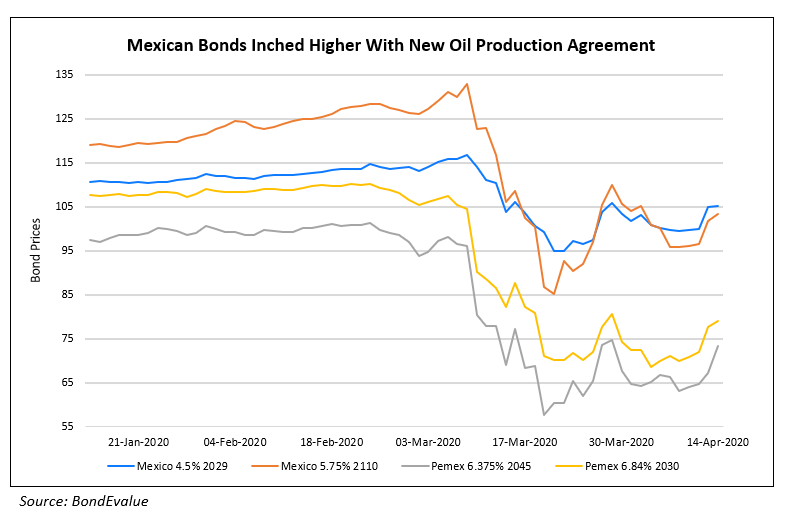 Markets are cautious ahead of the quarterly earnings season with US stocks giving up some of last week’s huge gains. The S&P 500 declined by 1% and DJIA declined by 1.4% but Nasdaq advanced by 0.5%. Most European markets were on holiday yesterday. Asia ex-Japan IG CDS spreads narrowed by around 10 bps to 120 bps, catching up to Thursday evening’s Fed measures. US Junk bonds saw the biggest rally in more than a decade in reaction to the support measures from the Fed with the average yield on high-yield bonds falling from a high of 11.4% on March 23 to 8.2%. Yields go down when bond prices go up. Asian markets as well as US index futures are opening up 1%-2% this morning. 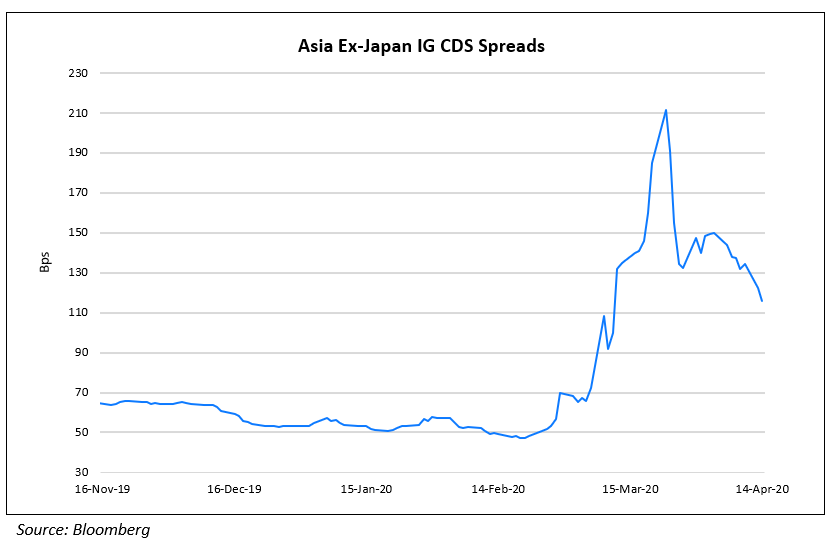 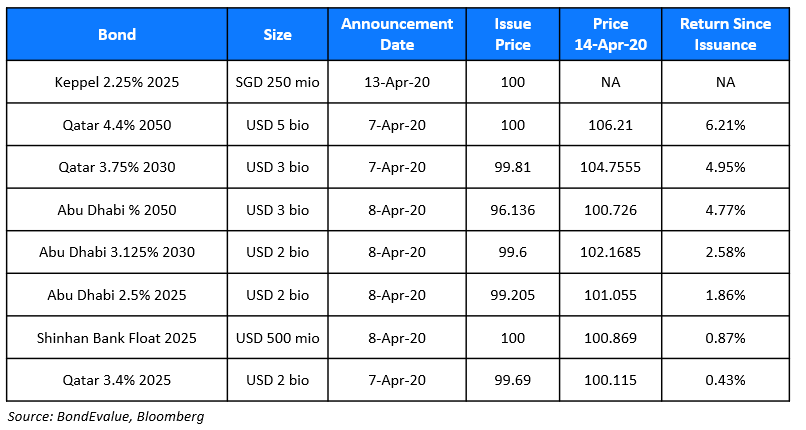 SoftBank has warned of a $12.5bn annual loss after its $100bn Vision Fund sustained a big hit from market turmoil as a result of the virus outbreak. Losses were primarily from its Saudi-backed technology fund, but were amplified by writedowns at WeWork and OneWeb. Uber and Oyo were also among the fund’s portfolio companies that have their fortunes linked to consumer spending, travel and transportation. This also includes China’s Didi Chuxing and Singapore’s Grab. SoftBank’s founder Mr Masayoshi Son has pledged as much as 60% of his shares in the company as collateral against billions of dollars of personal loans in March.

Ecuador’s long-term foreign currency debt rating was downgraded by S&P to SD from CCC- on expectation of a missed interest payment and a distressed exchange.

“We expect Thailand’s political transition under the elected government to be delayed during the COVID-19 outbreak-induced state of emergency. We are revising our outlook on Thailand to stable from positive due to our expectations of slower political adjustments under the economic and social uncertainties associated with the COVID-19 outbreak. We are affirming our ‘BBB+/A-2’ foreign currency and ‘A-/A-2’ local currency sovereign credit ratings on Thailand. Government measures to alleviate the economic impact are expected to widen the fiscal deficit to 5.5% of GDP, raising net government debt to 31% of GDP in 2020.”

Mexican President Andres Manuel Lopez Obrador scored a political victory by convincing other oil nations to allow Mexico to cut production far less than other OPEC+ members, reviving state-owned producer Pemex. Mexico will cut only 100,000 barrels, only a quarter of its pro-rated share. “There are no reasons to celebrate,” Carlos Elizondo, a former Pemex independent board member, wrote in an opinion piece published by Reforma newspaper Sunday. “The cost of getting away with it in front of the international community will be high, particularly at this moment of crisis”. Mexico’s own future inside OPEC+ is uncertain now, as it’s expected to decide over the next two months whether to leave the alliance, delegates said.

Investors showed a renewed interest to buy junk-rated debt on Monday after Fed’s unprecedented support to prop up the market by buying ETFs that buy high-yield debt. Monday saw more than $2bn in debt raised by issuers such as Cinemark that raised $250mn, Burlington that raised $1bn and others such as Sabre, TransDigm and Ferrellgas. The Fed move has sparked the biggest rally in junk bonds in more than a decade with the average yield on high-yield bonds falling from a high of 11.4% on March 23 to 8.2% on Monday.

Asian bonds recorded their biggest foreign outflows in the last seven years as investors chased safer assets and exited emerging markets. According to data from regional banks and bond market associations in Indonesia, Malaysia, Thailand, South Korea and India, foreigners sold a net US$17.28 billion worth of regional bonds last month, the highest since at least January 2013. Indian debt saw the largest outflow at $8.13bn in March, followed by Indonesia with $7.44bn of outflows, Malaysia with $2.85bn outflows and Thailand with $2.45bn in outflows.

Exxon Mobil Corp raised $9.5bn in new debt, paying a lower price than it did almost 4 weeks ago, indicating investor confidence returning after a route in oil prices and a stock market collapse. It priced a 10.5 year $2bn bond at 185 bps over treasuries to yield 2.61%, versus a 240 bps spread over Treasuries with a yield of 3.482% it paid on March 17 for a similar bond. In August last year, it raised $1.25bn through a 10 year bond at a 75 bps spread over treasury at 2.44%. The company is looking to stock up on cash while the market is still open to issuers of new debt. Similarly, Walt Disney Co said it entered an unsecured credit agreement for $5bn as companies across industries are scrambling to bolster liquidity. 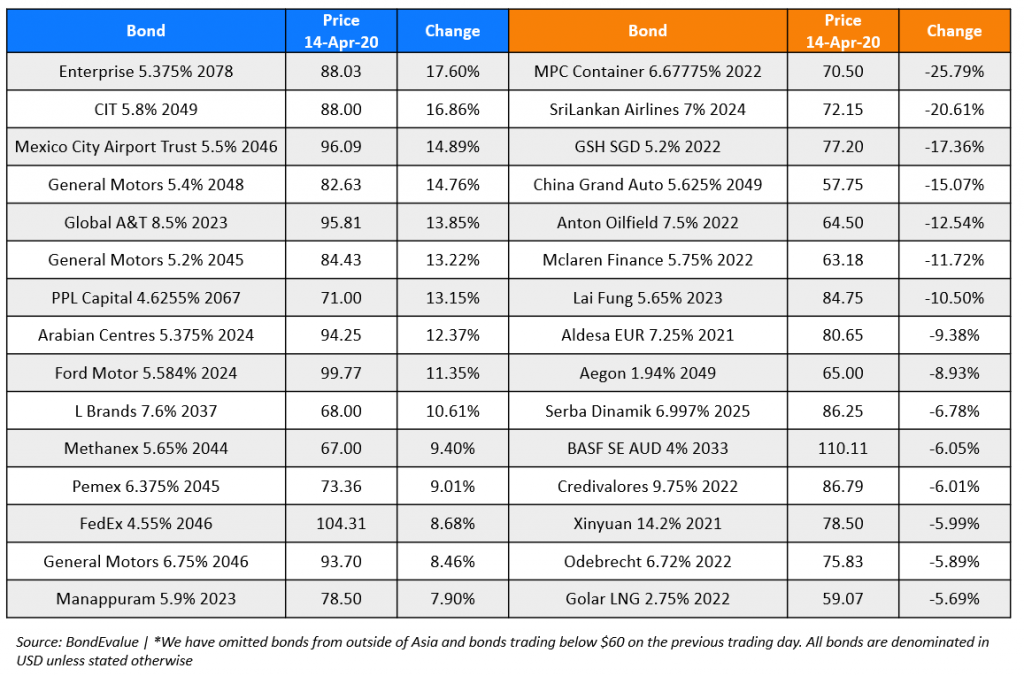