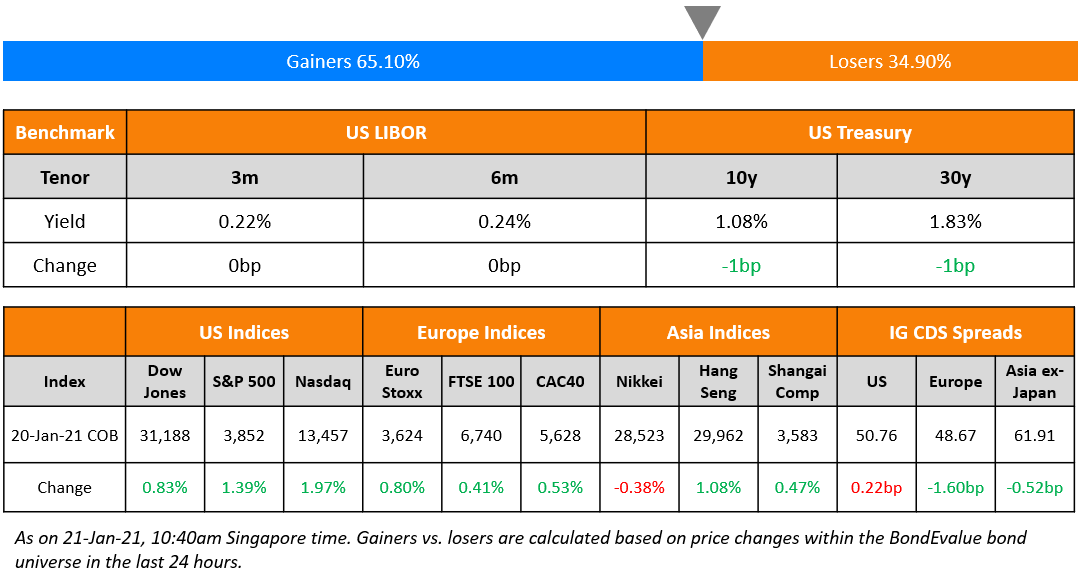 US equities ended on a strong positive note with the S&P and Nasdaq up 1.4% and 2% respectively with the FAANGS up ~5%. US 10Y Treasury yields were 1bp lower unchanged. Joe Biden was inaugurated as the 46th US president and signed a series of 17 executive orders including joining the Paris climate accord. FTSE, DAX and CAC gained 0.41%, 0.77%, 0.53%. US IG CDS spreads were 0.2bp wider and HY was 1bp tighter. EU main and crossover CDS spreads also tightened 1.6bp and 9.6bp respectively. Asia ex-Japan CDS spreads tightened 0.5bp and Asian equities are off to another positive start, up ~0.7% today. 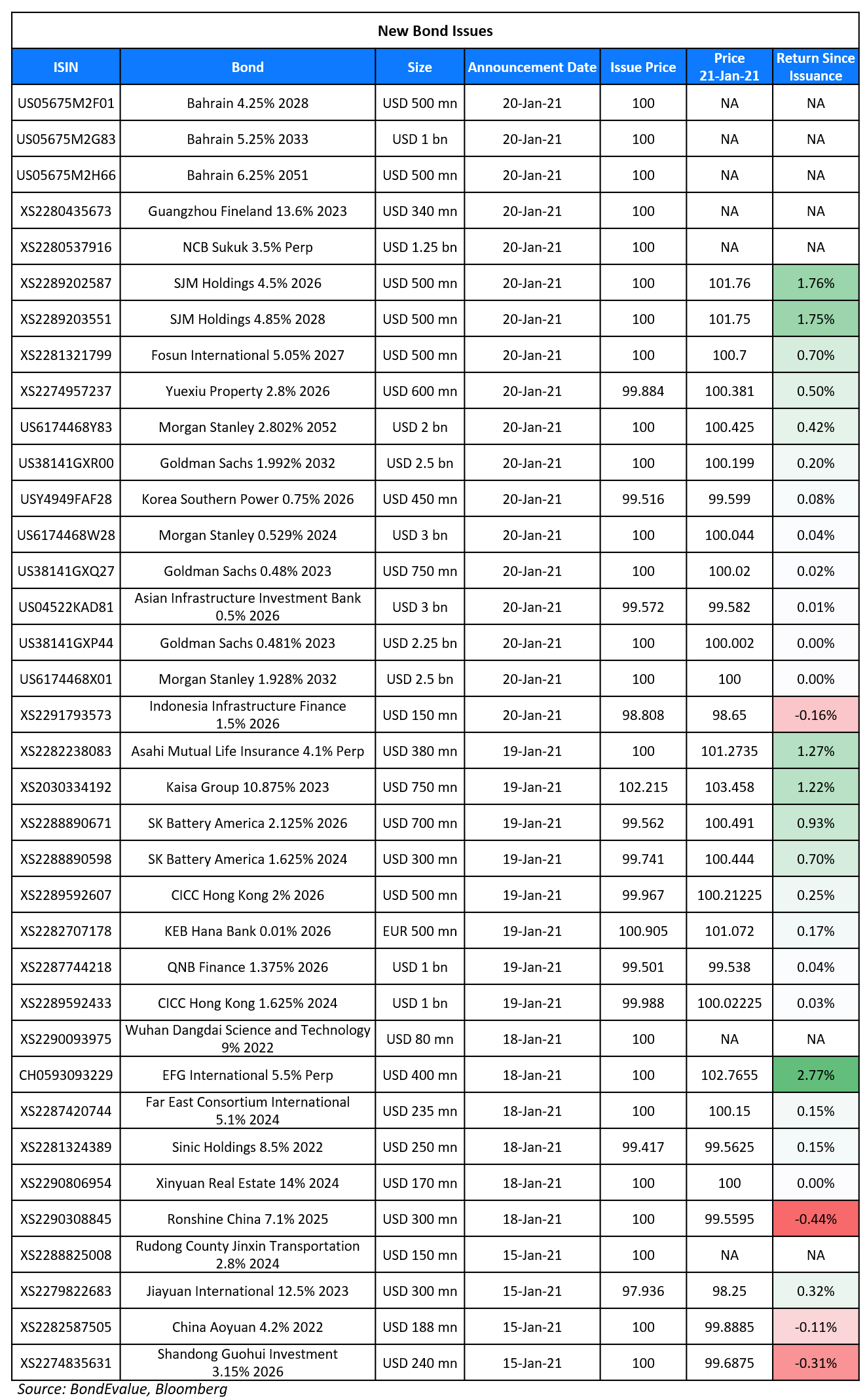 Li & Fung raised $100mn via a tap of its 4.5% 2025s at a yield of 4.04%. The bonds are rated Baa3/BBB and the coupons will increase by 25bp for each notch the bonds are downgraded below investment grade, capped at 100bp if the bonds are cut to B or lower. If the bonds are subsequently upgraded, then the rate will decrease by 25bp per notch floored at the initial rate. The downgrade protection will cease to exist if upgraded to Baa1/BBB+ (stable/positive). The tap trades at a new issue premium of 31bp over their initially issued 2025s which currently yield 3.73%.

Korea Southern Power raised $450mn via a 5Y green bond at a yield of 0.849%, or T+40bp, 35bp inside initial guidance of T+75bp area. The bonds have expected ratings of Aa2/AA- and received orders over $3.2bn, 7.1x issue size. Proceeds will be used for existing and future eligible projects in accordance with the issuer’s green bond framework. The issuer is a thermal generation company wholly owned by Korea Electric Power Corporation (KEPCO) which is 51% owned by the government.

Guangzhou Fineland raised $103.75mn via a 2.5Y bond at a yield of 13.6%, 25bp inside initial guidance of 13.85% area. The bonds have expected ratings of B3 and received orders over $375mn, 3.6x issue size. Proceeds will be used for offshore debt refinancing. Asia bought all the bonds – asset/fund managers/ hedge funds received a combined 87%, and private banks 13%.

Downgrade protection is a compensation to bondholders where the bond’s coupon will increase by a certain amount if the bonds are downgraded by credit rating agencies. In the case of Hong Kong-based supply chain manager Li & Fung’s tap of its 4.5% 2025s announced this morning, the bonds are rated Baa3/BBB and the coupons will increase by 25bp for each notch the bonds are downgraded below investment grade, capped at 100bp if the bonds are cut to B or lower. Here though, if they are subsequently upgraded, then the coupon will decrease by 25bp per notch floored at the initial coupon. The downgrade protection will cease to exist if upgraded to Baa1/BBB+ (stable/positive).

“They realized that there is some limits to what monetary policy can do to effect change in the real economy,” said Ramjee. “The Fed will continue buying bonds issued by the U.S. Treasury in order to fund the fiscal programs.”

In a research note by Anatoli Annenkov, a senior European economist at Societe Generale

“A more realistic objective, (rather) than aiming for 2% inflation two or three years ahead, is thus to focus on protecting favourable finance conditions, at the lowest cost possible while allowing a longer period for inflation to converge to target,” said Annenkov. “We thus see the ECB on hold for the near term, although growth expectations are weakening amid prolonged lockdowns.” “They will aim to find a consensus view before the summer,” said Annenkov. “The expected reformulation of the inflation target to a symmetrical one around 2% should not be controversial.”

While that strategy is similar to yield curve control, “they’re calling it something different,” said Rieger. “My feeling is that this is an important thing for the ECB, they’re looking at it and they’re actually envious of the BOJ. They would love to have something like that.”

“There are a number of issues in opting for such a strategy, or adding this to the ECB toolbox,” said Utermoehl. “This could bring out the idea that actually the ECB is doing monetary financing.”

“It’s not as explicit as the Japanese do it, but broader,” said Hense. “Once it’s out that you explicitly control the yield curve, this commitment can be very expensive.”

“We expect credit tightening and fiscal consolidation in 2021, but not policy rate hikes,” said Li. “The People’s Bank of China (PBOC) is likely to maintain a slightly dovish bias near term, given uncertainty associated with the uneven economic recovery, sporadic new COVID-19 outbreaks and CNY appreciation pressure.”

“Airlines are doing their best to control costs, but there is a limit,” Becker said. “The industry needs a revenue recovery.” 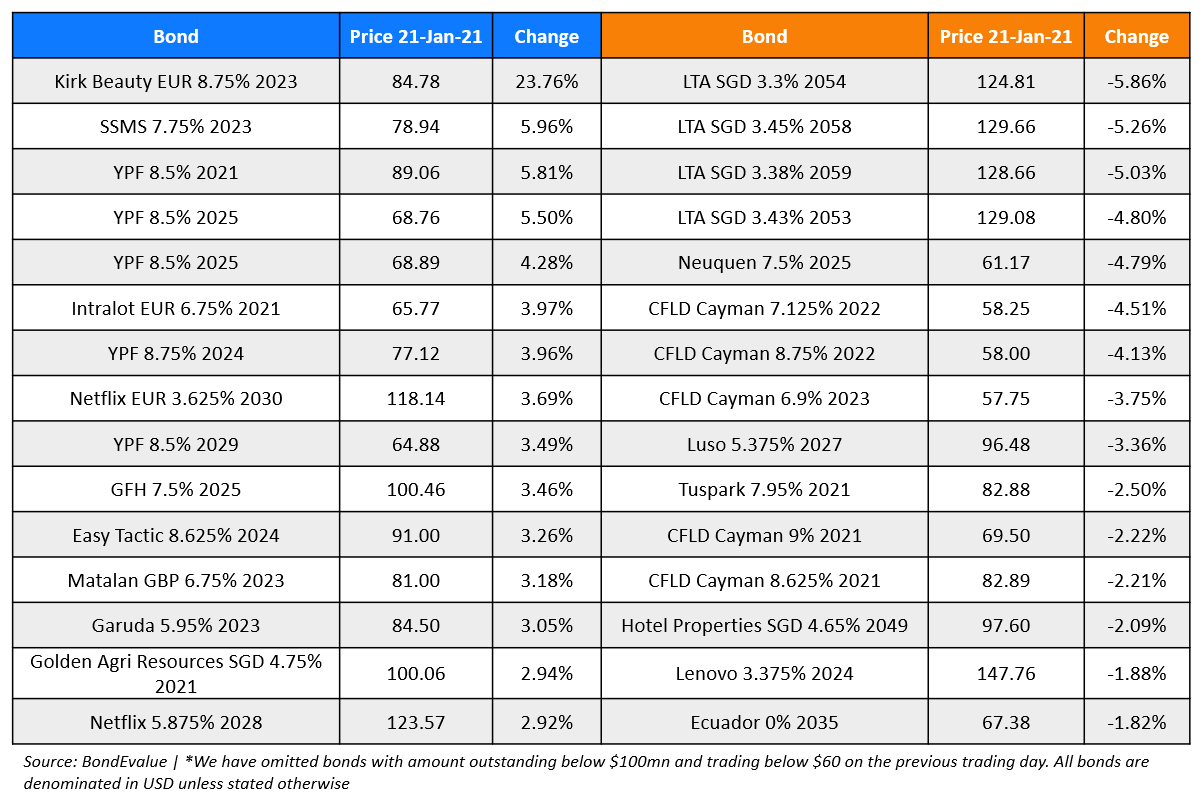