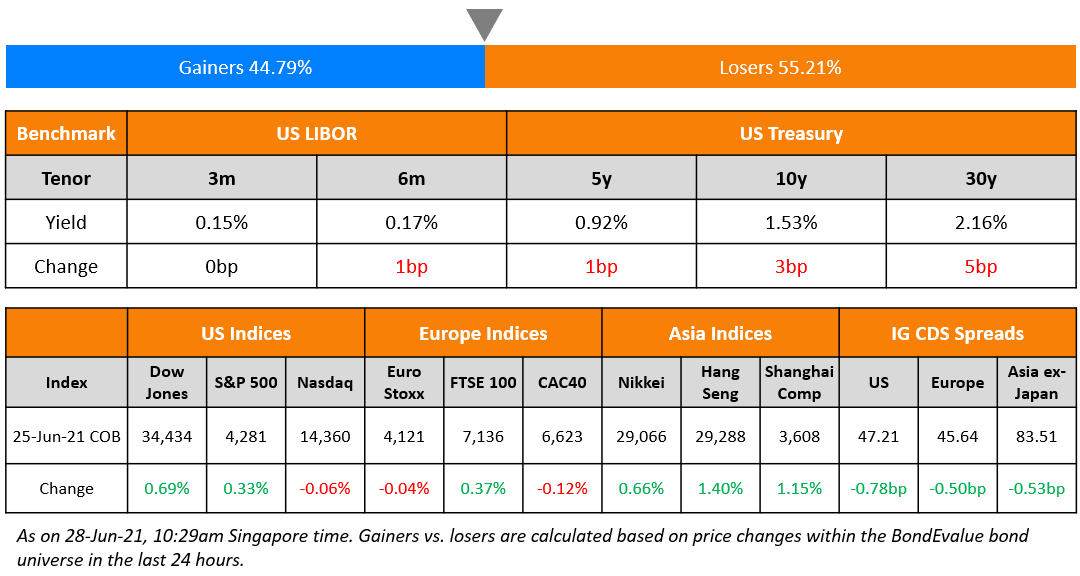 US markets carved out a winning week with the S&P up 0.3% on Friday reaching another record while Nasdaq was broadly flat; they ended the week higher by 2.7% and 2.4% respectively. The gains came on the back of weaker than expected inflation data and President Biden securing an infrastructure agreement with lawmakers. Financials, up 1.3%, once again led on Friday after the Fed indicated that the banking industry could withstand a severe recession. IT, down 0.15%, dragged the markets lower. US 10Y Treasury yields trended higher by 2bp to end the week at 1.52%. The increase came after the Fed’s main inflation reading, Core PCE rose 3.4%, the most since 1992, on supply constraints and increased demand for services in May. Consumer spending remained broadly flat vs. a 0.9% increase in April. European bourses also finished the week slightly higher – FTSE and DAX were up 0.4% and 0.1% while CAC was down 0.1%. US IG and HY CDS spreads tightened 0.8bp and 3.6bp respectively. EU main and crossover CDS tightened 0.5bp and 2bp respectively. Saudi TASI and Abu Dhabi’s ADX were up 0.4% and 2% respectively. Brazil’s Bovespa reversed gains and was 1.7% down. Asian markets opened mixed – Singapore’s STI was up 0.3% and Shanghai up 0.1% and Nikkei was down 0.1%. Asia ex-Japan CDS spreads were 0.5bp tighter. It’s a busy start to the week at the Asian primary markets with six new dollar deals launched.

Zhongyuan Yuzi Investment raised $300mn via a 5Y bond at a yield of 3.2%, 3bp inside initial guidance of 3.5% area. The bonds are rated A2/A and received orders over $1.1bn, 3.7x issue size. The issuer is Zhongyuan Zhicheng and the bonds are guaranteed by Zhongyuan Yuzi Investment. The Chinese LGFV will use proceeds for offshore debt refinancing and general corporate purposes. 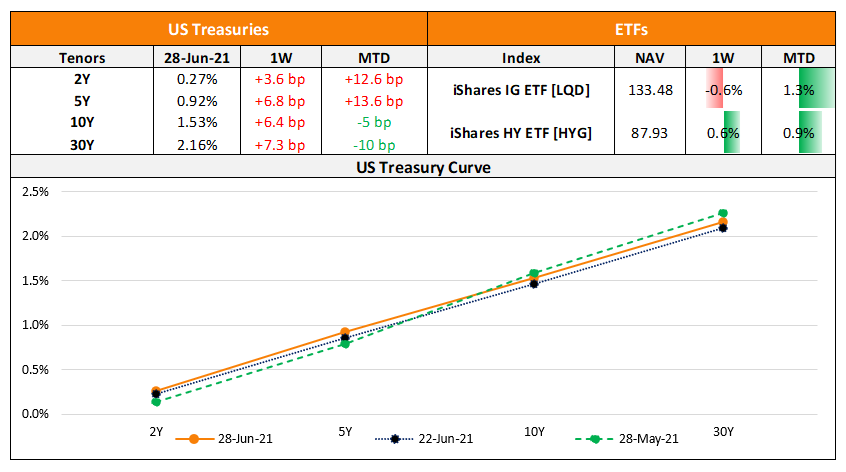 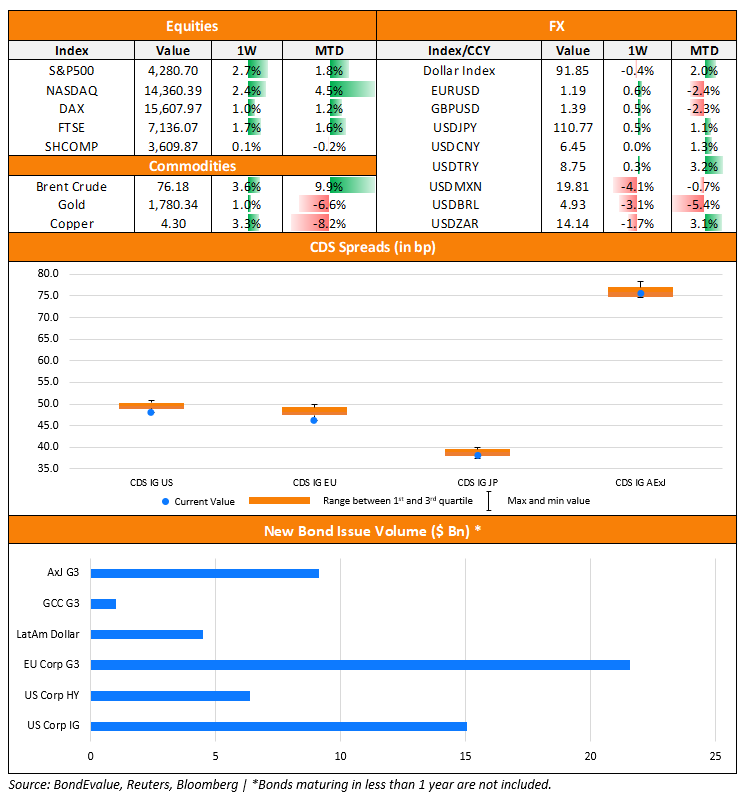 A bad bank is a bank set-up to buy bad loans and other non-performing assets from banks. While it may help reduce systemic impacts in the financial system, critics note that it may create moral hazard risks. India is set to have a bad bank by month-end called the National Asset Reconstruction Company (NARCL). NARCL will take over the bad loans from banks by paying 15% in cash and 85% as security receipts. The security receipts will be backed by a government guarantee, which is likely to ensure the face value of the security receipts.

On the possibility that conditions for rate increase could be met next year – Eric Rosengren, Boston Federal Reserve Bank President
“But it wouldn’t surprise me based on the current projections of what we’re seeing in the data that that criteria could be met as soon as the end of next year.” “A lot depends on exactly what happens with the economy over the course of the summer and into the fall.”
On bond market’s bears undaunted by post-Fed shakeout of short bets – Mike Schumacher, head of macro strategy at Wells Fargo
“The last three months have been a pretty slow slog for sure, but we are still bearish.” “I suspect tapering would probably be a big trigger for higher yields.” “And inflation helps that too.”
On Europe’s new bond issuance volume crossing the 1 trillion Euro mark – Matthew Bailey, credit strategist at JPMorgan Chase & Co
“Companies are using their cash to pay down upcoming maturities, and funding needs are low.”
On pressure building to resolve Chinese bad debt manager Huarong’s fate
Charles Chang, a director at rating agency S&P
“We don’t expect it, but if the Huarong situation results in a default, then what does that say about government support for other government-owned entities?” “If it turns out that a default or restructuring occurs, we will need to take a look at all [of them]”.
Jason Tan, analyst at CreditSights
“During the tenure of the former chair, Huarong expanded into many business lines unrelated to its core mandate of distressed debt management.” This “ultimately led to the downfall of the chair and a reckoning for the company.”
Ronald Thompson, a managing director of Alvarez & Marsal Asia
“Where [in] the US, we would have high yield lenders, we would have high-yield bonds, we would have private equity players, the asset management companies have partially filled that role in China,” said Thompson. “If you’re a boss of an AMC [asset management company] and your future is to close it down next year as was originally designed,” he added, “it’s probably not good for morale.”
On the view that India’s proposed bad bank may not be enough to deal with insolvency problems
Raj Kumar Bansal, managing director at Edelweiss Asset Reconstruction Co
“The proposed bad bank is useful as a one-time clean-up exercise of the bad loans that are pending resolution for years now.” “But it’s not a long-term solution in dealing with the stressed assets.”
Nikhil Shah, managing director at Alvarez & Marsal India
“India’s bankruptcy reforms started off well but they have slowed currently.” “Prolonged delays in resolutions, lengthy court battles, and uncertainty of recoveries post-approval of resolution plans are pushing many potential investors away” from the bankruptcy process, he said.
Prashant Kumar, chief executive officer at Yes Bank Ltd
“Stressed loans have taken far too much management time across the industry in the past couple of years.” “This bad bank will help shift focus from resolving soured loans to improving credit growth.”
On El Salvador’s decision to legalise Bitcoin exposing banks to money laundering and terrorism financing risks – according to a report by Fitch Ratings
Using bitcoin for all obligations “may increase the risks that proceeds from illicit activities pass through the Salvadoran financial system,” Fitch said. “Bitcoin’s lack of transparency could increase the risk of money laundering.” 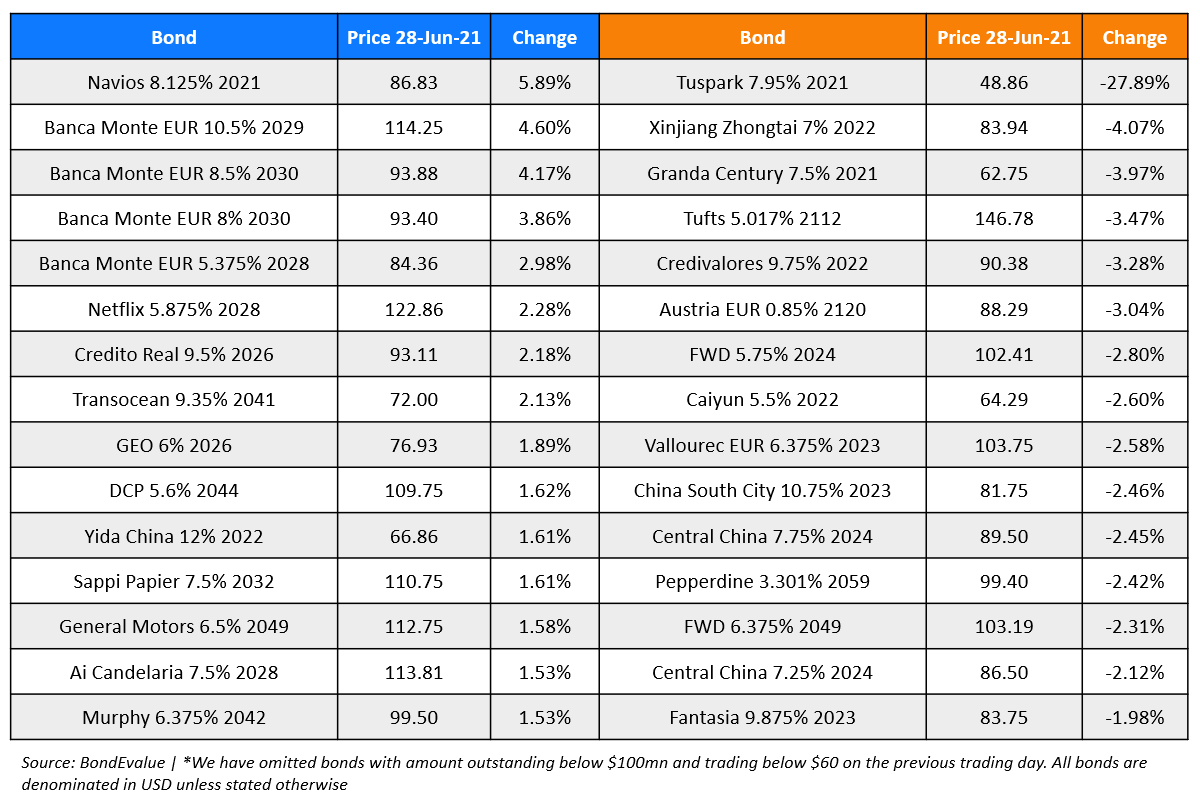