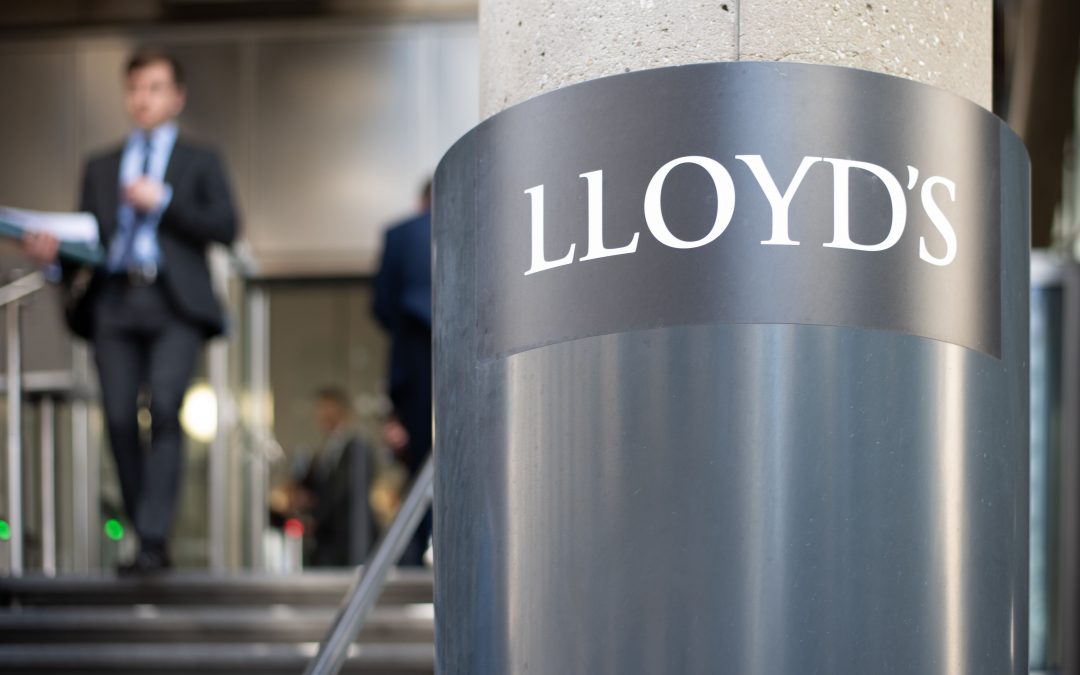 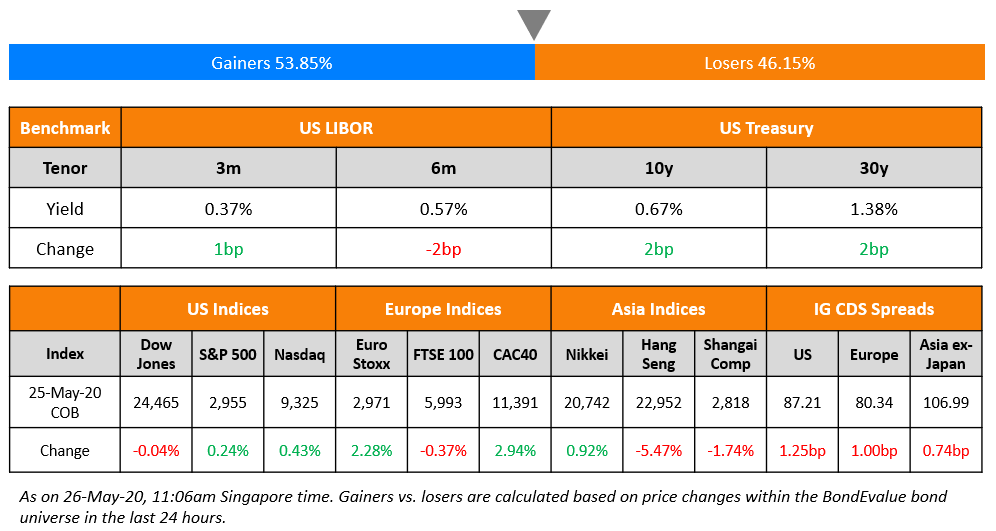 Asian markets open with a strong positive tone after overnight gains seen across European equity exchanges and US index futures. The moves were primarily driven by economies reopening as hopes for a speedy recovery spread. It was also helped by a higher than expected rebound in German IFO business sentiment index and a $9.8bn lifeline from the German government for Lufthansa. The Franco-German plan for a €500bn fund to provide grants to the hardest hit regions and sectors, which has seen opposition from the frugal four – Austria, Sweden, Denmark and the Netherlands – will be debated this week. Investors are still cautious about the escalating US-China tensions and the restart of pro-democracy protests in Hong Kong over the weekend. China is trying to reassure investors, who fear that the new security legislation is casting doubts over Hong Kong’s status as a financial hub. Singapore downgraded its 2020 GDP forecast for the third time on Tuesday, the trade ministry said, as the bellwether economy braces for the deepest recession in its history. The city-state lowered its GDP forecast to a contraction range of -7% to -4% from the prior range of -1% to -4%. Asian primary markets have reopened after the long weekend with new deals from Chinese issuers. 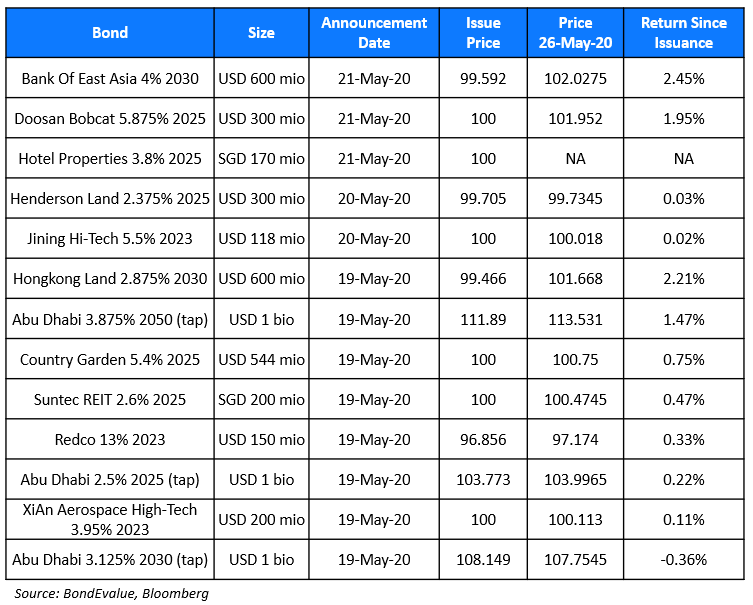 Fitch lowered the IDR ratings of JSW Steel Limited and Tata Steel Limited to BB- from BB rating on forecasts of lower demand for steel as a result of the economic impact due to the pandemic. Tata Steel UK Holdings Limited Long-Term IDR was also lowered from B- to B. The outlook is negative. The leverage of both the companies is expected to increase above 7.0x in 2020. The EBITDA of the companies saw a significant drop in the current financial year and is predicted to stabilize only in FY22. JSW’s and Tata Steel’s (Abja) dollar bonds remain largely unchanged since the downgrade on Friday. JSW’s 5.25% bonds due 2022 are trading at 95.675, down 0.34 points and its 5.95% bonds due 2024 are trading at 93.675, down 0.58 points. Abja’s 5.45% bonds due 2028 while its 5.95% bonds due 2024 are trading at 97.05, down 0.26 points.

China unveils a record package of approximately 3.6 trillion yuan ($506bn) to deal with the economic shock of the pandemic. This would lead to a fiscal deficit of 3.6% of GDP in 2020 up from 2.8% last year. It also plans to issue 1 trillion yuan of special treasury bonds. Since these bonds are not to be included in the central government budget, they will not affect the deficit of the central government directly. The local government special bonds quota has also been raised to 3.75 trillion from 2.15 trillion, a raise of 1.6 trillion yuan. The total budget deficit of all budgeted and unbudgeted debts increased to 8.3% of GDP, up from 5.6% last year. China has historically maintained its deficit under 3% and has crossed this limit for the first time.

The company, rated BBB/Baa2/A-, said it plans to use the proceeds to refinance existing debt and a $5.5bn term loan it took out in April to shore-up short-term liquidity. The new bond comes just a few days after it raised EUR 3bn via a three-tranche bond deal. AT&T is the world’s largest non-financial borrower with a total debt load of $164bn, which is down from its peak of ~$200bn a few years ago, according to a Bloomberg news story.

Lloyds Decides to Not Call Its EUR 750mn CoCo

Britain’s largest domestic lender, Lloyds Banking Corp informed investors that it will not redeem its EUR 750mn contingent convertible (CoCo) bonds. The bonds, also known as Additional Tier 1 bonds, had a fixed coupon of 6.375%, which will be reset to the 5Y EUR Swap Rate plus 529bp on Jun 27. Based on current index levels, the new coupon will be 5%, which is 137.5bp lower than its current fixed coupon. The bank mentioned that it remains strongly capitalized but added, “As a result of the extraordinary market challenges presented by COVID-19, the group has decided it is prudent to not reduce Tier 1 resources at this time”. Lloyds joins Deutsche Bank, which was the first bank to not call its AT1 bonds, and other banks may follow as the pandemic has put a strain on banks’ earnings. 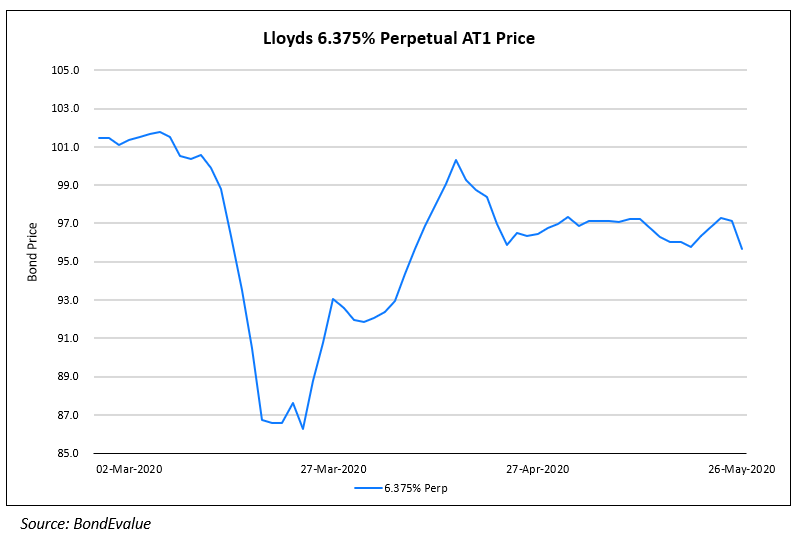 The Reserve Bank of India’s surprise 40 basis points rate cut last week has reduced the appeal of Indian debt and the prospect of further increase in government borrowing remains high as Asia’s third-biggest economy is seen contracting in the fiscal year through March 2021. The policy rate was cut from 4.40% to 4.00%. Outflows from India’s government and corporate notes totaled $13.7bn this year, amid a sell-off in emerging markets, which sent the rupee to a record low of 76.9088 against the dollar in April. While the currency has posted a modest recovery since, it’s still among Asia’s worst performers. Given that Indian bonds aren’t part of the global bond indexes, investments “remain largely off-benchmark trades for global investors,” said Karan Talwar, senior investment specialist for emerging-market debt at BNP Paribas Asset Management in Hong Kong. Foreigners hold about 1.1 trillion rupees or less than 2% of India’s total outstanding debt.

Mexican president Andres Manuel Lopez Obrador backed up the recent decision to limit sustainable energy companies’ usage of the CFE electrical system. US, Canadian and European companies are filing local lawsuits to protect their investments. The move puts the energy ministry rather than the independent market operator in charge of deciding who can generate electricity. The government says it was an emergency measure warranted by the coronavirus crisis, but companies counter that it gives preference to CFE, the state power utility. This affects more than the energy sector, as it sets another precedent that the current government can change rules overnight on private investments.

Mexico’s state-owned oil company Petroleos Mexicanos has seen investor sentiment improve in recent weeks despite sky-high debts, a slump in demand and no clear direction about how the government will turn the money-losing driller around. Despite all the risks of holding the world’s largest fallen angel, the ignominious distinction for a company that loses its investment-grade rating, bondholders are betting on continued support from the government. The company is saddled with almost $105bn in debt and more than $54bn of unfunded pension liabilities, and late last month posted a loss of $23.6bn, one of the largest for a single quarter in corporate history. Despite being initially punished by bond investors, as long as there is sovereign support and even if the oil slump continues, investors seem to be holding strong as the price action shows. 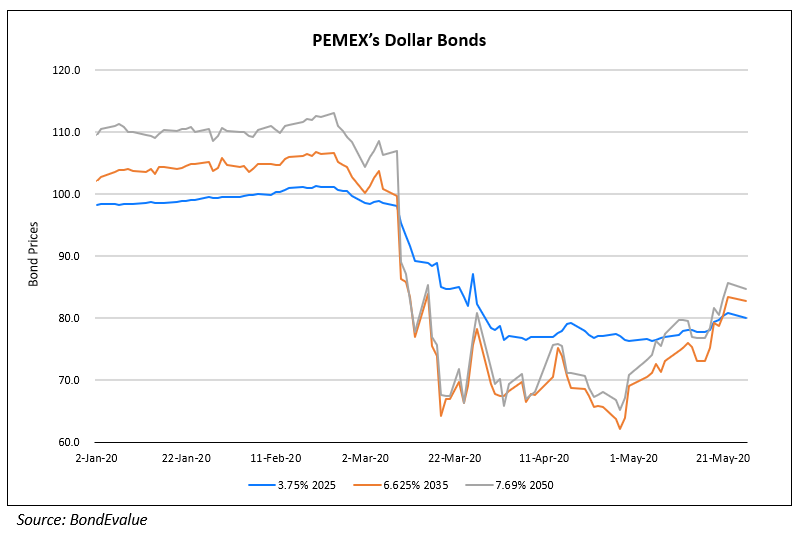 The ongoing pandemic has another victim. Hertz was forced to seek bankruptcy protection under Chapter 11 on Friday after its lenders did not agree to another extension on its auto lease debt payments. The company had a debt pile of $18.7bn as of end March 2020. Last Thursday, the existing CEO Marinello stepped down to make way for the new CEO Paul Stone amid potential bankruptcy filings. The loss of business due to travel restriction, the delayed measures to cut costs and frequent management changes added to the woes of the ailing car rental company. Note: Chapter 11 restructuring allows the company to continue operations however, the creditors face a loss in their holdings. Hertz’s dollar bonds have been falling in price since March and currently trade between 12-30 cents on the dollar.

Argentina Expected to Make a New Offer to Bondholders

Argentina is expected to make a counter offer to its creditors over the next few days as part of the country’s efforts to restructure its $65bn of foreign debt. The government had initially proposed a cut in average coupon from 7% to 2.3% and a moratorium for three years. All creditor groups rejected the offer and made counter offers that included a one-year moratorium. Argentina’s economy minister told the Financial Times, “There is still an important distance to cover but all sides are at the table trying to find a solution”. He added, “We are all aware that the sooner we manage to resolve the problems of Argentina’s sustainable debt, the better it will be for all sides, and the better it will be for the stability in the region as well.”

The affluent and wealthy in mainland China and Hong Kong have piled in as Chinese developers sold a record $26bn in dollar bonds in the first quarter and $1bn since, brushing aside concerns that pushed junk-bond yields to an eight-year high in March. Private banks made up 32% of preliminary orders for a bond offering from home builder Country Garden Holdings Co. last week, a person familiar with the matter said. They accounted for 10% of interest in Zhenro Properties Group Ltd.’s issuance, which helped reopen the high-yield bond market after a March sell-off made investors wary of junk-rated names. Private banks have subscribed to $4.9 billion of Chinese high-yield bonds so far this year, up 36% from the period last year, data compiled by Bloomberg from available deal statistics show.

Chinese brokerage, Founder Securities has launched a new tender offer for up to $60mn of its 6.9% bonds due this November. It is offering $95 per $100 of principal plus accrued interest, which is 5 points higher than its previous tender offer of $90 per $100 of principal that was launched in end April. The new tender offer, which has a deadline of Jun 2, is being done to improve and extend the company’s debt maturity profile.

This is a term which refers to bonds that default before making their first coupon payment. The default generally occurs due to an unanticipated market shock. This is a rare phenomenon and has been generally seen in junk rated bonds. Some of the companies which have defaulted before paying out a single coupon include Hertz, MF Global, Just For Feet, Ameri Food Distribution and Delta Merlin Dunia Textile. 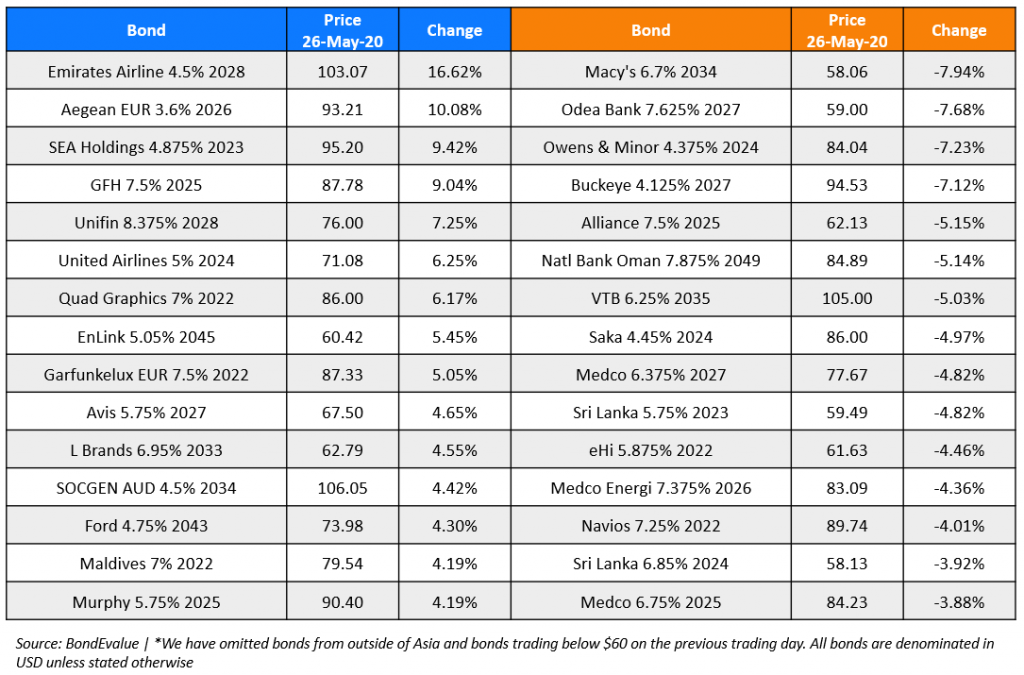 “The FX hedging costs for investments in Indian bonds, with implied yields around 5-7%, are relatively higher than those of most regional peers”. Concerns over a widening deficit and a credit rating downgrade are also prompting outflows, he said.

“If we came to believe that sovereign support was less forthcoming, or that there was an effort to more fully separate the sovereign and the oil sector as independent entities, we would become more cautious.” Barrineau said that unlike other non-investment grade oil names, Pemex’s “importance to the sovereign means default risks are low.”