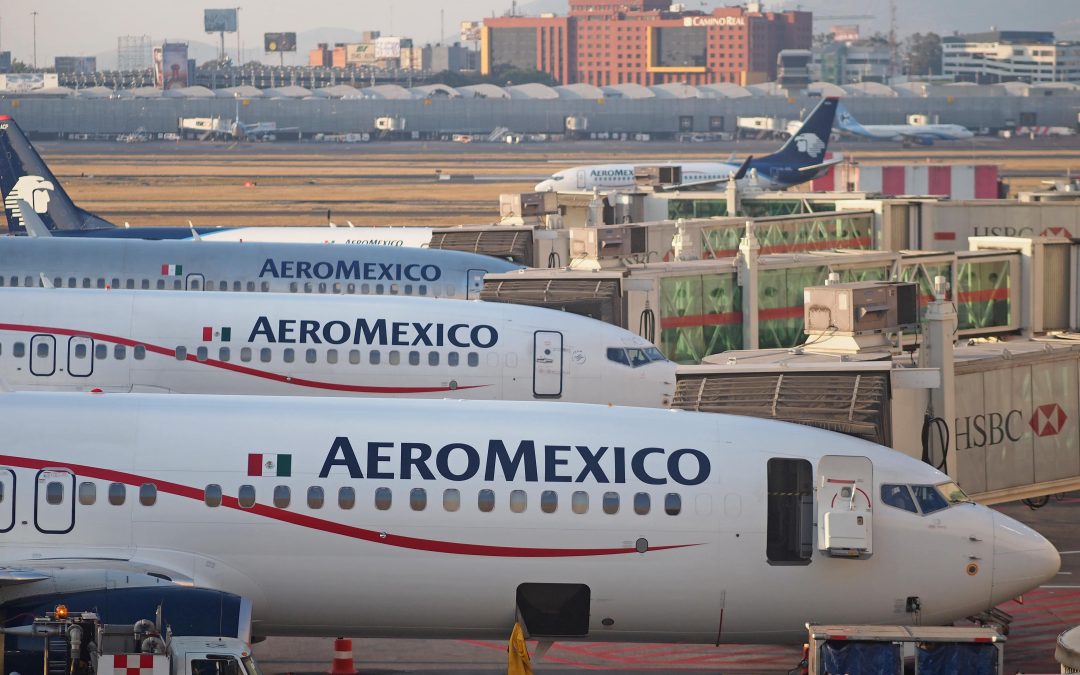 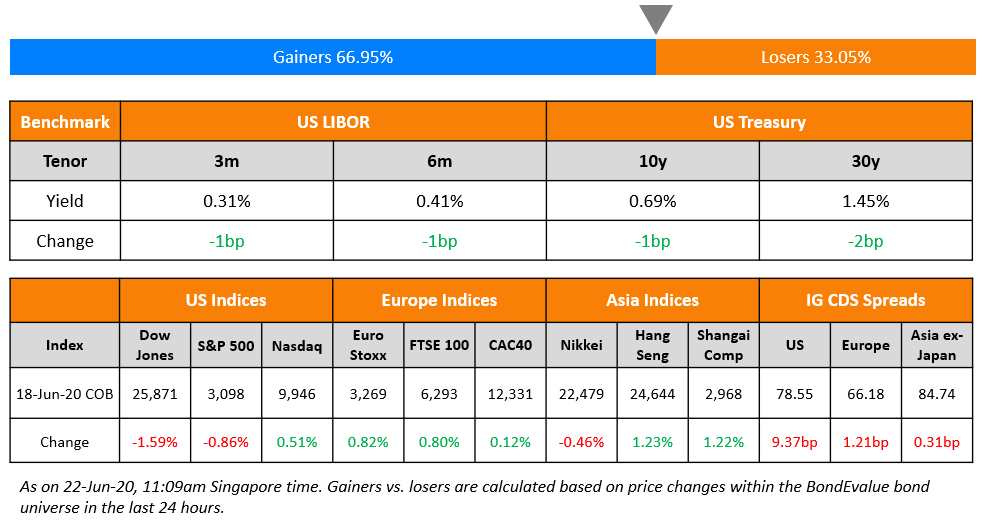 US Markets reversed earlier gains for the day and ended lower on Friday after Apple announced it was again closing stores in states with rising coronavirus cases. Recent rises in cases from the US, China, Australia and Brazil have stoked fears of another blow to the economic recovery. Comments from Fed Chair Jerome Powell also weighed on sentiment as he warned that there would be no quick fix to the economic crisis and that the path ahead is likely to be challenging. Despite this, stocks are on track to have one of the best quarters in decades. Investors will be focused on the bond pipeline as last week saw US IG debt surpass 2019’s entire volume. Foreign investors have flocked back to US IG bonds with net purchases in April up 2.4x in April to $10.9bn vs. March’s $3.2bn and pushing an index of IG bonds to an all-time low of 2.23% with prior low being 2.26% in February and peaking at 4.7% in March. Early this morning, US index futures opened lower but have reversed and are slightly up once the Asian day started. Markets are higher now showing that we may be ahead for further choppiness in the days to come. 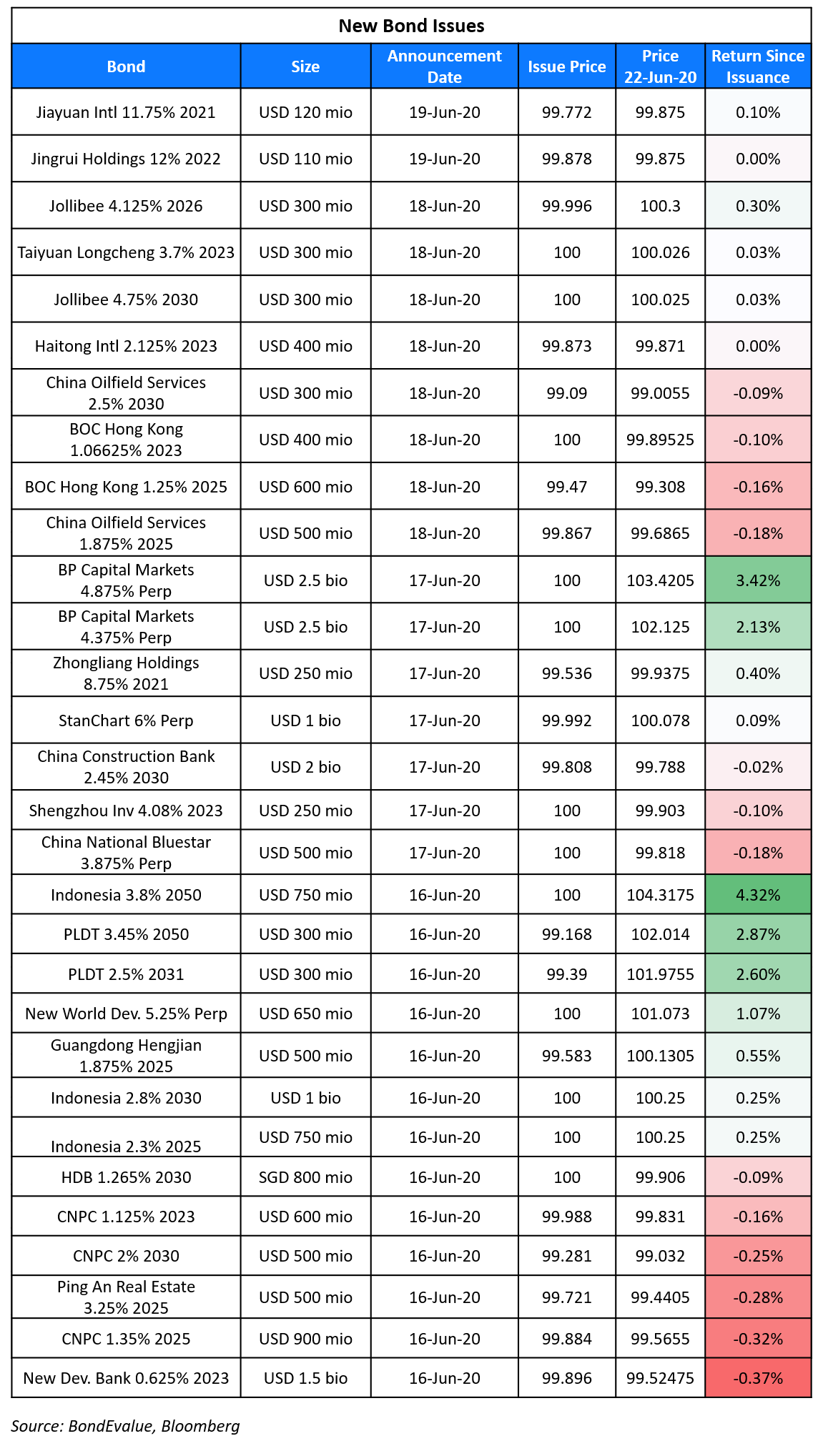 Oracle Corp. Downgraded To ‘A’ Due To Expected Share Buybacks; Outlook Negative

Fitch Revises Kenya’s Outlook to Negative; Affirms at ‘B+’

Emerging market (EM) dollar bonds have witnessed its eighth consecutive week of gains while stocks have reached its highest level since March, according to Bloomberg. The positive investor sentiment can be attributed to the stimulus actions initiated by central banks in these EM economies as well as due to the easing in US-China’s trade relationship. A Robobank strategist Piotr Matys commented that “All that matters is that there is so much liquidity that it has to go somewhere and emerging-market assets are clearly benefiting from that,” and “Nothing seems to influence the markets in a negative way for longer than a day or two”. This week will have interesting insights into the central bank policies by China, South Korea, Thailand, Malaysia, Brazil, South Africa and Poland. While Turkey’s central bank is likely to lower interest rates by 25bp after a cumulative 1,575bp cut since July, Mexico’s monetary authority is likely to cut rates by 50bp on Thursday. Russia’s central bank on Friday had implemented the biggest rate cut in 5 years. However, the central banks in Asia are holding on from further quantitative easing. China, Thailand and the Philippines central bank are likely to keep the rates unchanged. We have summarized the current interest rate and upcoming policy date and expected actions in the table below. 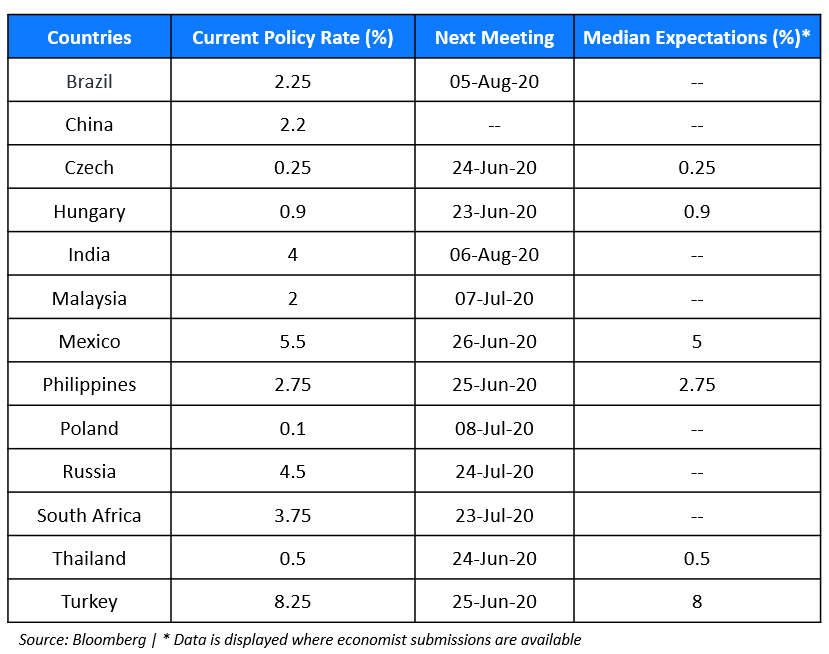 Grupo Aeromexico Considers Chapter 11 Bankruptcy in the US

In surprising news, Mexican airlines Grupo Aeromexico is considering filing for Chapter 11 bankruptcy in the US due to the disruption faced by the airlines industry due to the pandemic. Latam Airlines and Avianca Holdings have already sought bankruptcy protection as passenger traffic in the region dropped by 96% in April due to government lockdowns. Aeromexico’s 7% bonds due 2025 fell 8.36 cents to 30.22 cents on the dollar since Friday. Shares of the airlines fell by 4.9% to 6.64 pesos in Mexico City taking the total fall to 55% since the pandemic struck the world. The company has been hit harder than its domestic counterparts as it covers international routes. The company has not yet filed for bankruptcy and is in the process of identifying sources to finance its revenue losses and the mounting debt. It had raised debt of $400mn in January and had a liquidity of $560mn in April, which it considered sufficient to meet its upcoming bond payments. Ever since the pandemic, dollar bonds of the three LatAm airlines majors Avianca, Latam Airlines and AeroMexico have seen a huge drop. 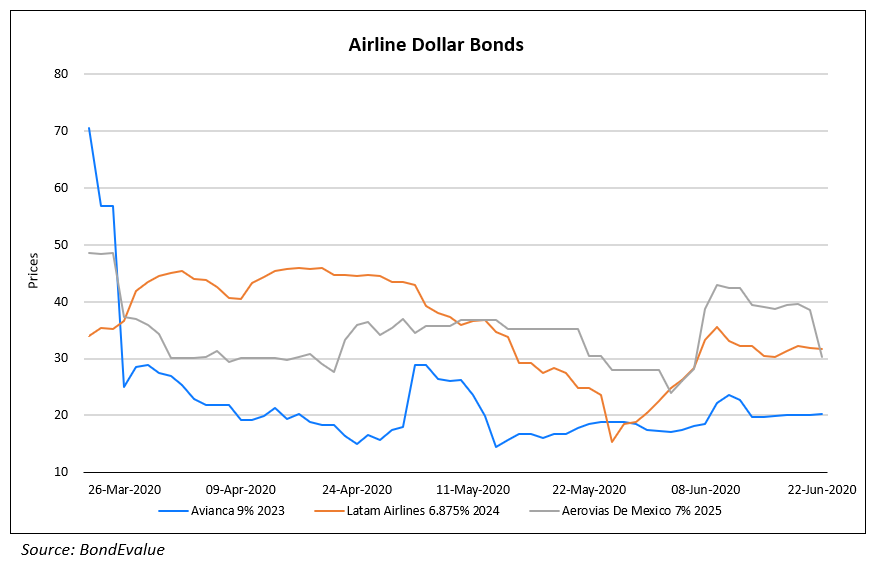 Mexico’s Grupo Bimbo has a 4.4% market share of the global bakery industry and is considered the market leader in this segment. On Friday, rating agency S&P revised its outlook to stable from negative for the company while maintaining its BBB rating at a time when most companies are getting downgraded. The bakery industry has not been affected as badly as the other industries by the ongoing pandemic. The company focuses on staple and high-consumption bakery products and has a global footprint. It has over 13,000 products across categories ranked first or second in markets where it operates. 50% of its sales come from North America, while Mexico, LatAm, and rest of the world account for 32%, 9% and 9% respectively. The company’s balance sheet remains strong and its revenues have improved as the work from home environment results in an increase in consumption of its products. Appreciation of the US dollar against the Mexican peso has also been advantageous for the company. The company’s EBITDA margin is expected to rise to 13.5% in 2020 by S&P, a 50bp gain over the last year. Its 4% bonds due 2049 have rallied over ~20 points since late March to currently trade at 100.86 on the secondary markets.

American Airlines Group Inc. announced over the weekend that it plans to raise $3.5bn to improve its liquidity position, which has been strained due to the pandemic. It plans to raise $1.5bn via a sale of shares and 5Y convertible bonds. The airline, which is the most-indebted of the largest US airlines, said it also plans to raise $1.5bn via senior secured bonds and $500mn via a 4Y term loan facility. The senior secured bonds are expected to have a 5Y tenor, no call option, a yield of 11% and possibly backed by airport slots and gates, according to Bloomberg. The expected bond sale follows bond issues by Southwest and Delta Air earlier this month.

In related news, United Airlines Holdings Inc. plans to issue new bonds with a unique structure – bonds backed by its mileage program. The airline plans to issue bonds through bankruptcy-remote entities that United created to house its mileage program MileagePlus. The entity is separate from the carrier’s operations. MileagePlus derived 71% of its cash flow last year from third-parties such as credit cards that award miles to its clients. The remaining 29% was from United passengers. The proposed debt is expected to be rated higher than the airline, given MileagePlus’ protection from the rest of United and priority in repayment.

Foreign Investors Piled In to US Corporate Bonds in April

Foreign investors had net purchases of $10.94bn worth of US corporate bonds in April, up 2.4x compared to the $3.21bn in March, according to data from the US Department of The Treasury. This comes after a net sell-off of $20.51bn in Feb and $31.81 in January. The increase in foreign investor appetite for US corporate bonds can be explained, at least in part, by the announcement by the Fed that it will be purchasing US corporate bonds worth $750bn in a bid to stimulate the economy from the negative impact of the pandemic. Another possible reason for increased demand from foreign investors can be the higher yield offered by US corporate bonds. Given the current environment, bond yields in Europe and Japan are either negative or near-zero. US investment grade corporate bonds are currently offering a yield of 2.15% in comparison, measured by the Bloomberg Barclays US Corporate Bond Index. The increased demand is expected to continue into May and June, given the large issuance volume of successful new bond issues we have seen from US corporates. “Anecdotally, we are seeing tremendous flows from overseas, particularly in Asia and particularly for longer-dated bonds where investors can maximise yield,” said Andrew Karp, global head of investment-grade debt capital markets at Bank of America Securities. 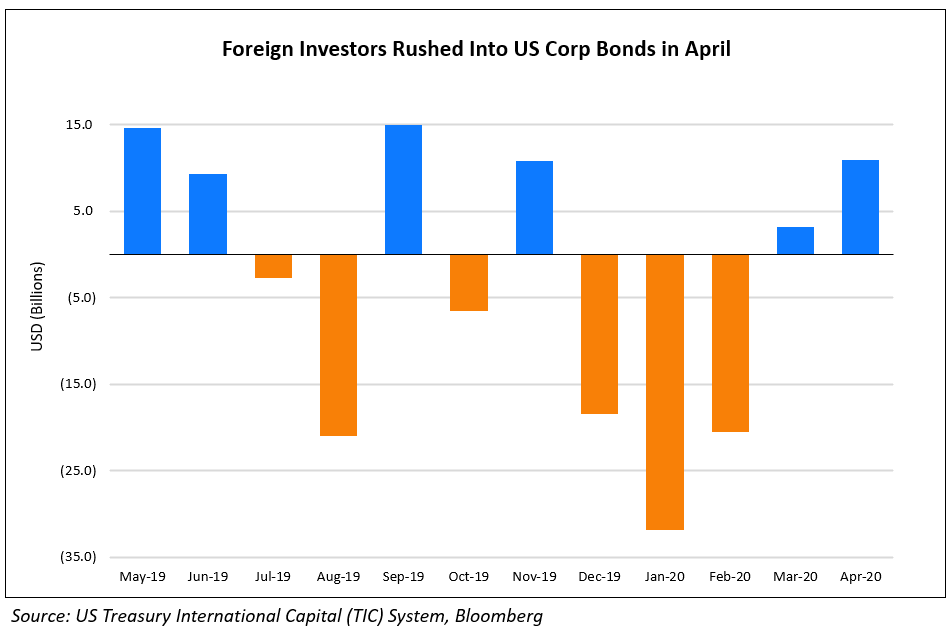 China’s luxury clothing company Shandong Ruyi received approval from holders of its 3Y CNY 1bn ($140mn) bonds to extend coupon payments by another six months to December 15, after having extended payment from March 15 to June 15. However, the financial woes for the debt-laden company are far from over. Jining City Urban Construction Investment (JCUCI) recently withdrew from an October agreement to infuse capital into Shandong Ruyi and become its second-largest shareholder. JCUCI, a local government financing vehicle (LGFV, Term of the day, explained below), said it will retain just a 0.01% stake in the company instead of the 26% that it had agreed to purchase. While Shandong Ruyi managed to repay its $345mn dollar bond in December last year, its 6.95% $300mn bonds due 2022 are currently trading at distressed levels on the secondary markets. The bonds have dropped from ~78 cents a year ago to ~33 cents on the dollar currently.

Local government financing vehicles or LGFVs are debt-issuing entities set up by local governments in China to fund infrastructure and related projects. LGFVs came into existence because local governments were prohibited from raising debt directly. Hence, these local governments set up off-balance sheet entities known as LGFVs. LGFVs have become popular over the past decade and are regular issuers of Chinese yuan and US dollar bonds.

While these issuers are backed by local governments, there remains to be a certain degree of concern among investors about their ability and willingness to repay debt. The concern is driven be events in the past when LGFVs came close to defaulting on their bonds. One such LGFV, Hohhot Economic & Technological Development Zone Investment narrowly escaped default in December last year after it managed to make a delayed repayment  to its local currency bond holders after investors exercised a put option on its bonds.

“…Hong Kong will remain the most internationalized and open market in China, which is in the interests of China, the United States and the world,” he was quoted as saying. Earlier this month, Li said that many U.S.-listed Chinese firms will likely list on the Hong Kong exchange this year.

The 27 European governments are negotiating a proposal for 750bn euros ($841bn) to tackle the Covid-19 crisis. “Our ultimate goal is to reach a deal as soon as possible. There is still quite some way to go towards an agreement, so we will need to work hard in the coming days and weeks,” said Charles in a letter to the 27 capitals this week.

On the Chinese bond market taking off – Pan Gongsheng, China People’s Bank vice-president and director of the Foreign Exchange Bureau 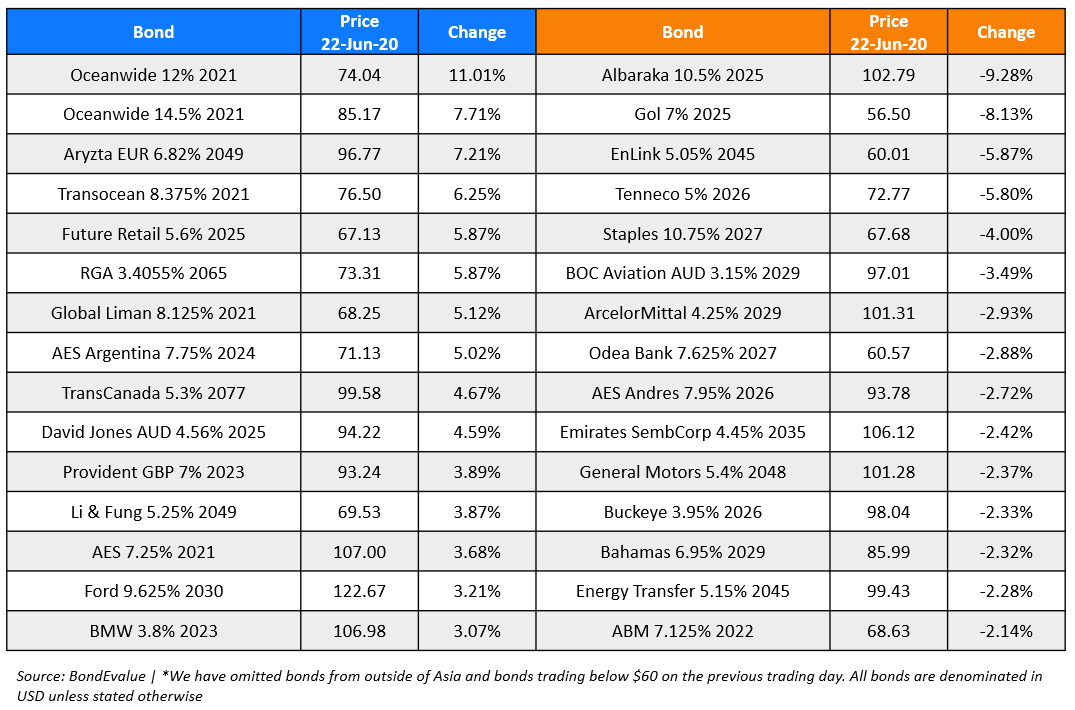