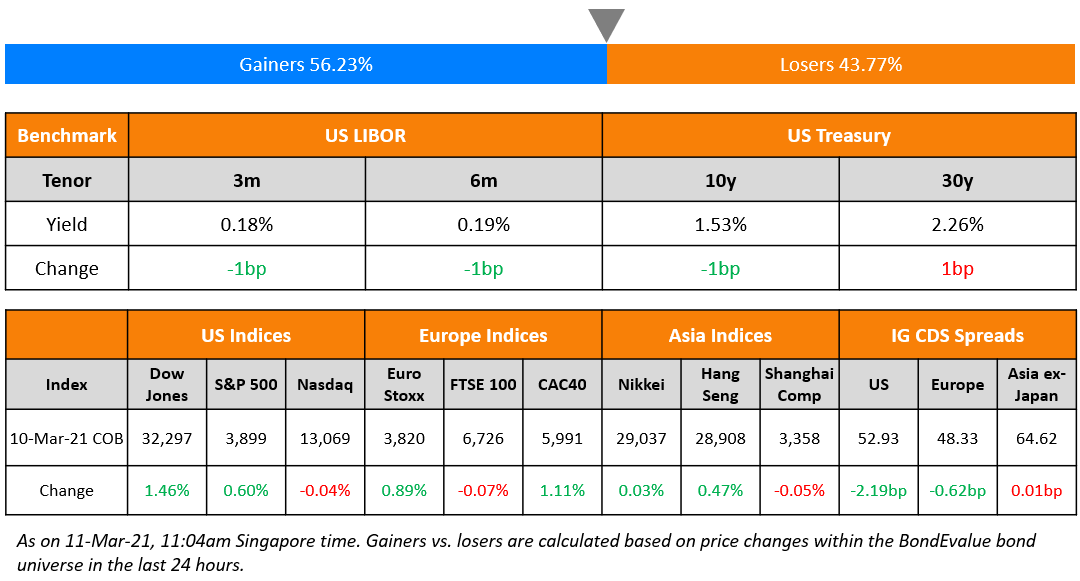 US equities continued to recover with the S&P 0.6% higher while Nasdaq was flat. US 10Y Treasury yields were steady at 1.53% with core CPI up 0.1% MoM and 1.3% YoY, slightly lower than January’s reading. The US House approved the $1.9tn relief package clearing the way for the bill to be passed as a law. European equities saw stronger gains with the DAX and CAC up 0.7% and 1.1% while the FTSE was flat. US IG CDS spreads were 2.2bp tighter and HY was 10.6bp tighter. EU main CDS spreads were 0.6bp tighter and crossover spreads tightened 6.3bp. Three deals have been launched in the Asian primary markets following the pricing of three deals on Wednesday. Asian equity markets are up over 1.5% and Asia ex-Japan CDS spreads were flat.

We are also conducting a complimentary webinar “Navigating The Bond Markets by Leveraging The BEV App” to help users exploit the BondEvalue app to manage their bond portfolio on the WebApp as well as the Mobile App. 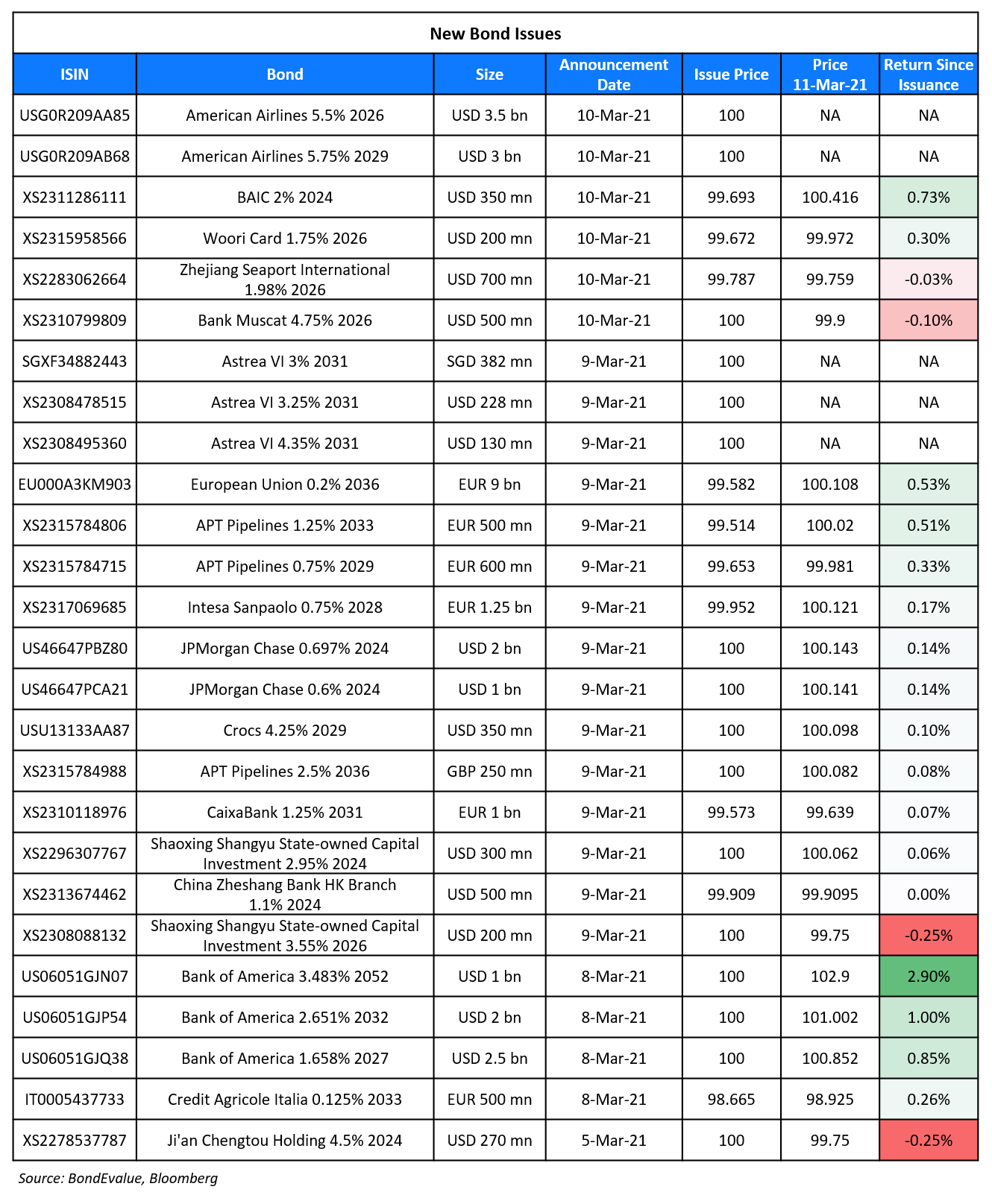 BAIC Motor raised $350mn via a 3Y bond at a yield of 2.106%, or T+177.5bp, 42.5bp inside initial guidance of T+220bp area. The bonds have expected ratings of BBB/BBB+ and received orders over $2.2bn, 6.3x issue size. Proceeds will be used for debt refinancing and working capital. The bonds are issued by wholly-owned subsidiary BAIC Finance Investment and guaranteed by the Hong Kong-listed parent. Asia took 79% and Europe 21%. Banks and financial institutions got 57%, fund/asset managers 31%, sovereigns and insurers 11%, and private banks 1%.

Zhejiang Provincial Seaport Investment raised $700mn via a 5Y bond at a yield of 2.025%, or T+120bp, a strong 50bp inside initial guidance of T+170bp area. The bonds have expected ratings of A1 and received orders over $3.9bn, 5.6x issue size. The bonds are guaranteed by Zhejiang Provincial Seaport Investment & Operation Group.

Woori Card raised $200mn via a 5Y social Formosa bond at a yield of 1.819%, or T+100bp, 25bp inside initial guidance of T+125bp area. The bonds have expected ratings of A3, in-line with the issuer and received orders over $575bn, 2.9x issue size. Proceeds will be allocated to eligible categories in accordance with Woori Card’s social bond management framework. This is Woori Card’s debut dollar issuance in the markets after raising $100mn via a private placement of a Formosa last year.

Weighted average life (WAL) is a feature of amortizing bonds, which are different from straight bonds in that they payback principal through the life of the bond rather than a one-time payment of the full principal at maturity. WAL refers to the average time, stated in years, in which the bond’s unpaid principal remains outstanding. WAL is calculated as follows with an example of a 3Y bond with a $100 face value where P1 refers to principal repayment in year one, P2 in year two and P3 in year three:

“The winds are blowing harder now. The world isn’t a more dangerous place, a mild increase in interest rates is not a cataclysmic event… but there is now the big-herd mentality with a greater propensity for rotations,” he said. “They are moving more frequently, they are moving faster and they are leaving a trail of inefficiency,” making markets vulnerable to big swings, he added.

“Although the bond market has steadied a bit, pressures will remain,” said Koshimizu. “It has priced in future normalisation of the Fed’s monetary policy, the Fed’s policy becoming eventually neutral. But it has not yet priced in the chance of its policy becoming tighter.”

On the flood of new debt testing bond markets

“It just makes everything so much worse,” said Mulholland. The size of Treasury debt auctions “are completely out of control,” he added.

Auctions like the most recent seven-year note sale are “not something we like to see,” said Caron. “If we see another one of those then I think we start to get more concerned.”

“If yields continue to drift higher with significantly stronger [economic] growth rates, central banks will be fine with that,” said Stealey.

“We think that this current sell-off in Europe at least is a more temporary phenomenon, because Europe will take several years to recover from this COVID episode,” said Zahn. He anticipates the ECB would likely remain “incredibly accommodative”.

“That rise in real rates story tends to be the killer for emerging-market assets’ performance,” said DiCenso. “We are growing concerned around the resiliency of the local market trade into the coming weeks and months.” “We have dramatically pulled back on our exposure because of those changing market dynamics from cross-asset volatility increasing,” DiCenso said. The firm will reassess its position once the volatility begins “to pull back from the extremely elevated levels we see them at right now,” she added.

“One could argue that the market has already priced in a more optimistic economic outlook and with that an eventual (U.S. Federal Reserve) tapering to a large extent,” they said.

On the calls for reforms in Kuwait despite rebound in oil prices – Khalifa Hamad, Kuwait’s finance minister

“We must address the scarcity of financial resources and the depletion of liquidity in the treasury (the General Reserve Fund) as soon as possible, and they must be accompanied by radical economic and financial reforms that contribute to reducing expenditures and increasing non-oil revenues,” Hamada said. “Issuing bonds and other solutions are not reform solutions, but rather temporary measures that must be taken to fulfil the immediate obligations represented by salaries and subsidies, which constitute more than 71% of the state’s total spending,” Hamada said. 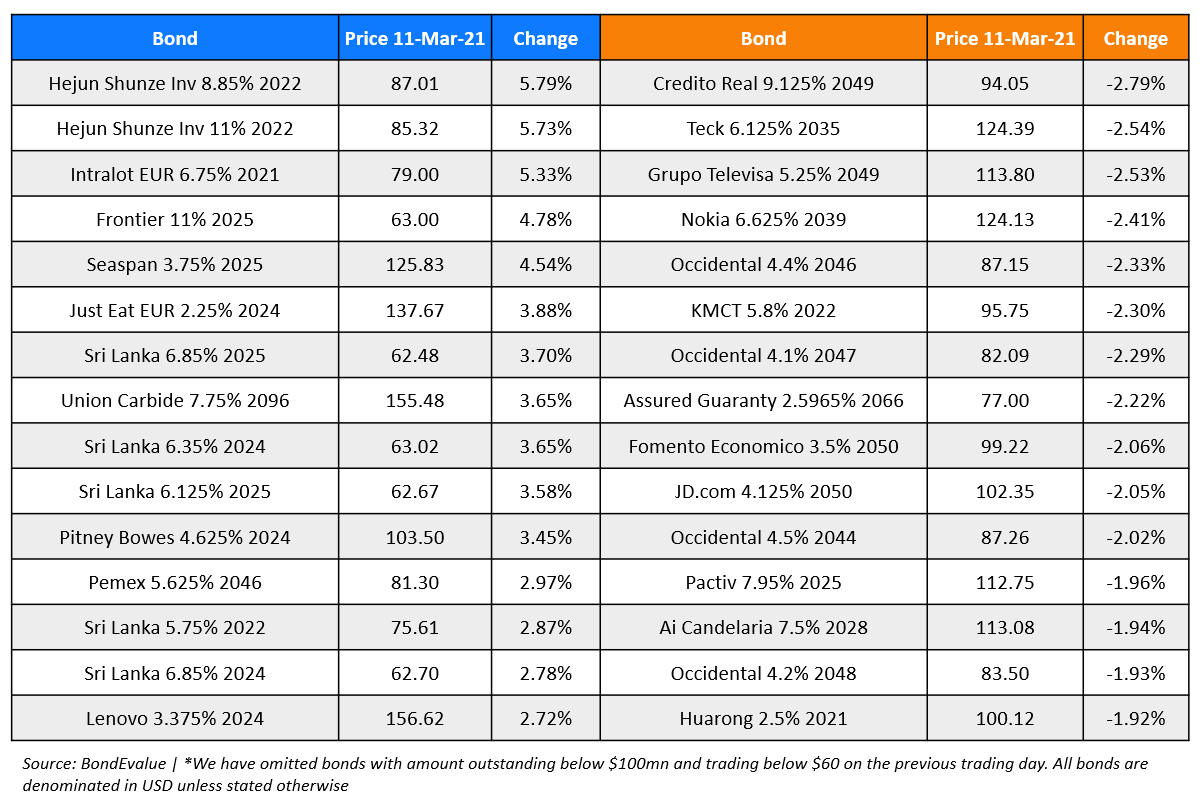