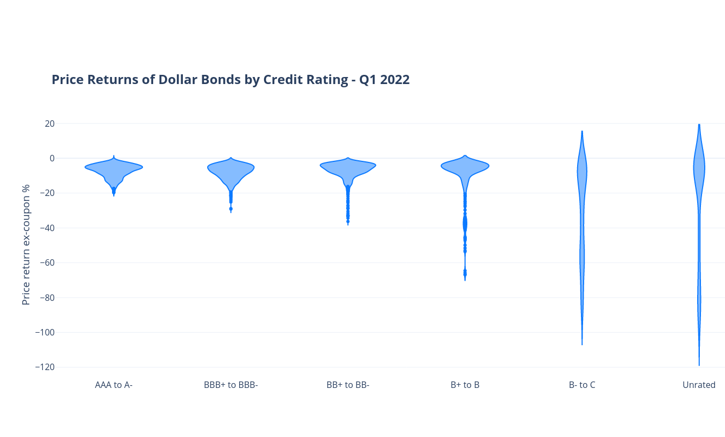 The first quarter of 2022 was dismal for bond investors with increased volatility caused by rising inflation, expectations of higher interest rates and Russia’s invasion of Ukraine. US inflation hit a 40Y high in January and February to 7.5% and 7.9% respectively. This led the US Fed to raise rates by 25bp at the FOMC meeting that concluded on March 16.

The inflation pick-up was also contributed to by a massive rally in commodities including energy and oil prices due to the Russia-Ukraine war – Brent Crude for example touched a 13.5Y high of $139.1/bbl during the height of the risk-off event; the Bloomberg Commodity Index is up 26% in Q1, the largest jump since Q3 1990. US Core PCE inflation, the Fed’s inflation measure came in at 5.4% in February vs. 5.2% in January, its highest since April 1983. These factors have only added to speculation of more rate hikes with the market pricing in a total of eight rate hikes (assuming a 25bp hike) by end-2022 vs. expectations of just over six hikes prior to the FOMC meeting. Based on hawkish guidance by Fed members in the past few weeks, the street is now baking in a 50bp hike in May.

Higher inflation and increased expectations of multiple rate hikes in quick succession have had a bearing on US Treasury yields, pushing them higher across the board, as seen in the interactive chart below. However, short-term yields rose by a larger quantum compared to medium- and long-term yields, resulting in a dramatic flattening of the yield curve as seen in the interactive chart below. The yield curve even saw an inversion in certain sections – the 2s10s and 5s30s curve briefly inverted in the last week of March, after beginning the year at 78bp and 64bp respectively.

With this backdrop of higher yields, inflation and geopolitical tensions, the first quarter of 2022 saw a massive drop in fortunes with 95% of dollar bonds in our universe delivering a negative price return ex-coupon, following a dreadful Q4 2021 when 81% of dollar bonds ended in the red. As is expected in times of rising benchmark yields, Investment Grade (IG) bonds underperformed High Yield (HY) bonds during the quarter. Almost 99% of IG dollar bonds ended in the red while 88% of HY bonds ended lower in Q1 2022.

Among the largest movers in the AAA to A- rating within the Investment Grade space were longer-dated bonds of Chinese tech companies like Alibaba and Tencent that fell 15-20% (see the interactive violin chart below). This was not only due to the rise in Treasury yields, but also a function of the crackdown by Beijing on the tech sector. However, the situation has eased more recently, with Beijing now taking a softer stance and vowing to keep markets stable and ease crackdowns. In the BBB+ to BBB- space, again longer-dated bonds of companies led the decline. Most notable were dollar bonds of Chinese developers Country Garden and Sino-Ocean whose dollar bonds sold-off as key property metric, contracted sales dropped during the month of February

Reading the Interactive Violin Chart below: The Y-axis indicates change in bond price (ex-coupon) and the X-axis indicates the rating categories. Outliers can be identified by hovering over them. The width of the violin indicates the number of bonds that fall under the corresponding price returns on the Y-axis.

Junk bond losses were led by Chinese developers and select LatAm issuers. Mexican lender Unifin's bonds dropped ~40% on concerns over its ability to tap the bond market and refinance debt due in 2023. Scroll down to the 'Top Gainers & Losers' for more details on Chinese developers' bond losses. The gainers within the high yield space saw select Chinese developers' bonds, predominantly those maturing in 2022 rally as near-term default risks reduced for some. In the B- to C space, China South City’s 2022s rallied the most, by over 80% on news of an HKD 1.9bn ($245mn) SOE investment, helping the developer use the proceeds to repay debt.

Among the (now) unrated bonds, Russian issuers dominated the losers list. All three leading rating agencies Moody's, S&P and Fitch have withdrawn their ratings of Russian entities. The gainers were led by cyclical and commodity companies' bonds thanks to the massive rally in oil and commodity prices.

With dollar bonds across the world dropping due to geopolitical and interest rate risks, we now take a closer look at the performance of dollar bond indices across regions during the quarter. Among the broad indices, the Asia ex-Japan High Yield Index fell the most, by 11%, followed by the Emerging Market index, down 9.8% and the US IG index down 8.1%. The performance of most dollar bond indices were the worst since Q1 2020 when the  pandemic began.

In the Asian region, the China High Yield dollar bond index was the worst performer, down over 16%. This was followed by Malaysian and Indonesian dollar bond indices, down over 7%. India outperformed, down a relatively lower 4.4% in Q1 2022. 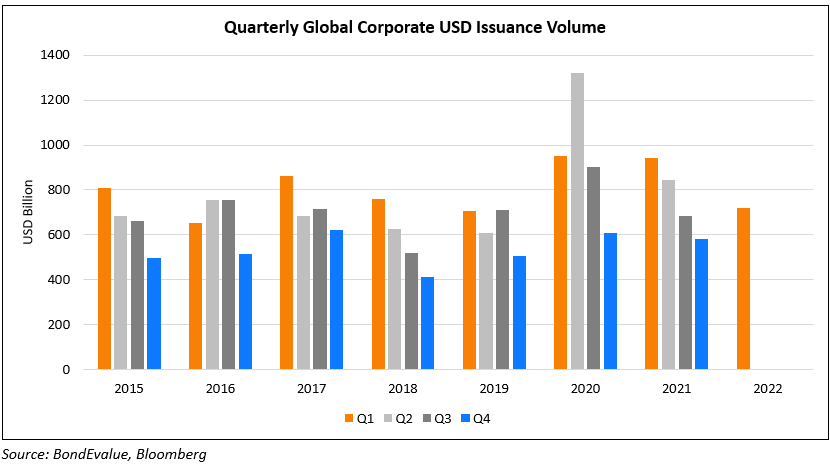 APAC (ex-Japan) & Middle East G3 issuances stood at $93bn in Q1 2022, up 53% QoQ, but down 39% vs Q1 2021. The month of March saw volumes up 17% MoM and down 55% YoY. Chinese property developers who typically contribute to a large chunk of issuances during the first quarter of the year were locked-out of the international bond markets this time due to a host of credit rating downgrades, defaults, information disclosure issues and overall poor investor sentiment towards the sector as a whole. In the last three years, Chinese developers contributed over 10% of issuances from the APAC (ex-Japan) & Middle East G3 issuances during the first quarter. This number was just over 2% this time. 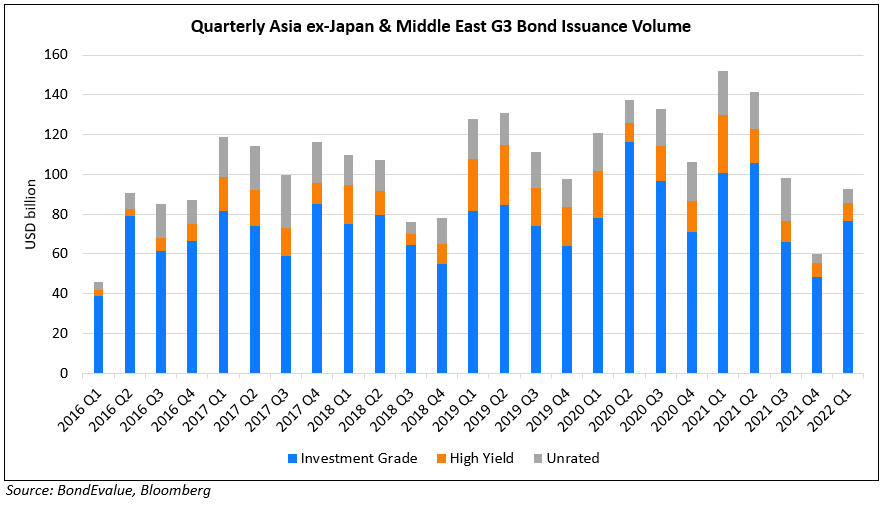 The largest deal globally in the quarter was from AT&T-Discovery's $30bn 11-part deal, the fourth largest dollar issuance ever. Besides, global systemically important banks (G-SIBs) dominated global issuance volumes during the quarter. This includes Goldman Sachs’ jumbo $12bn six-trancher, Bank of America's (BofA) $9bn five-trancher, Morgan Stanley’s $6bn deal, Citigroup’s $5.5bn three-trancher etc., many of which came after their Q4 2021 earnings releases and prior to the jump in US Treasury yields. 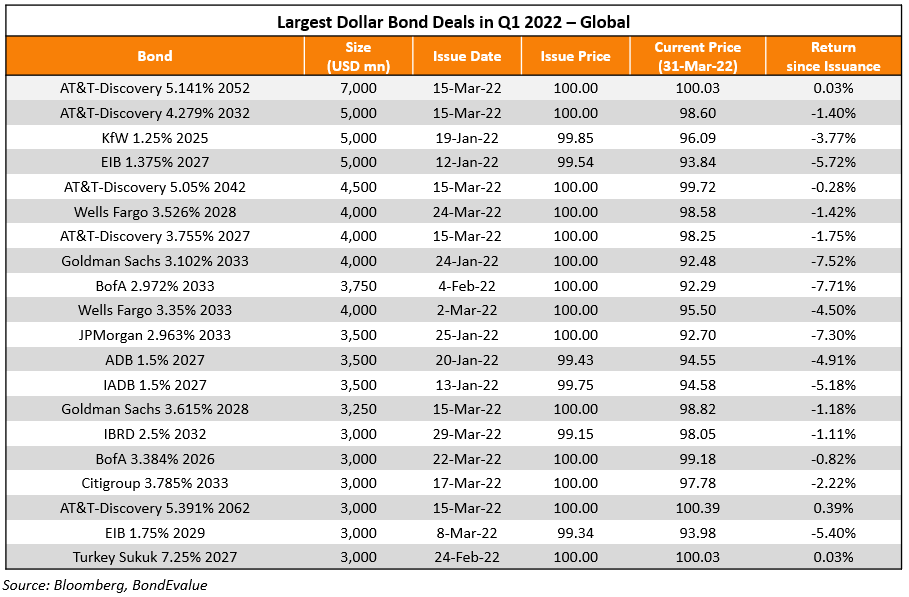 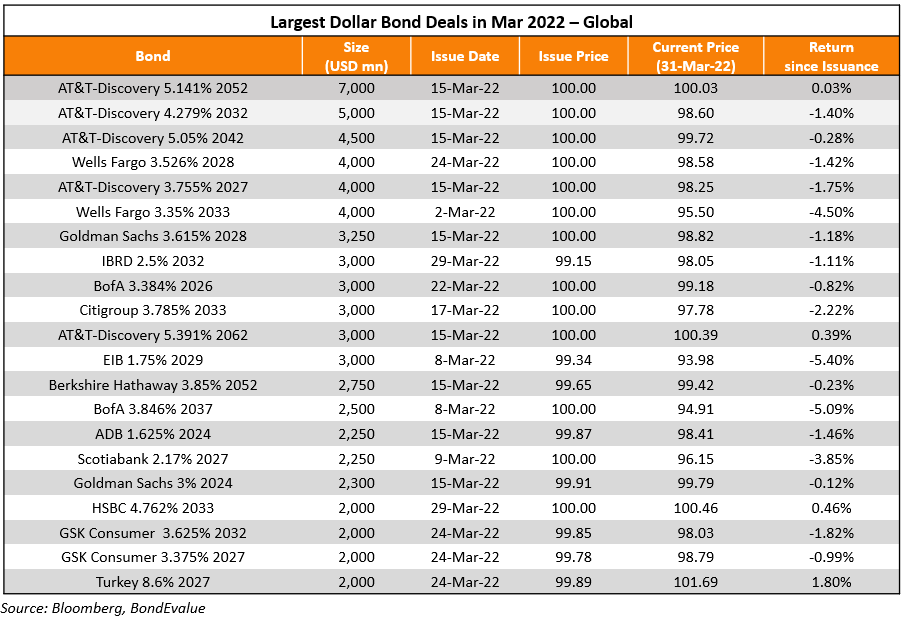 In the APAC & Middle East region, sovereigns led the largest deals - Turkey raised a combined $5bn via two dollar deals in February and March; Philippines raised $2.25bn via a three-trancher and; Indonesia raised $1.75bn via a dual-trancher. Among the corporates, large issuances included deals from NAB and Nomura raising $4.75bn each via five and three-part deals, Reliance's $4bn three-part deal, AAHK's $4bn four-part deal amongst others. 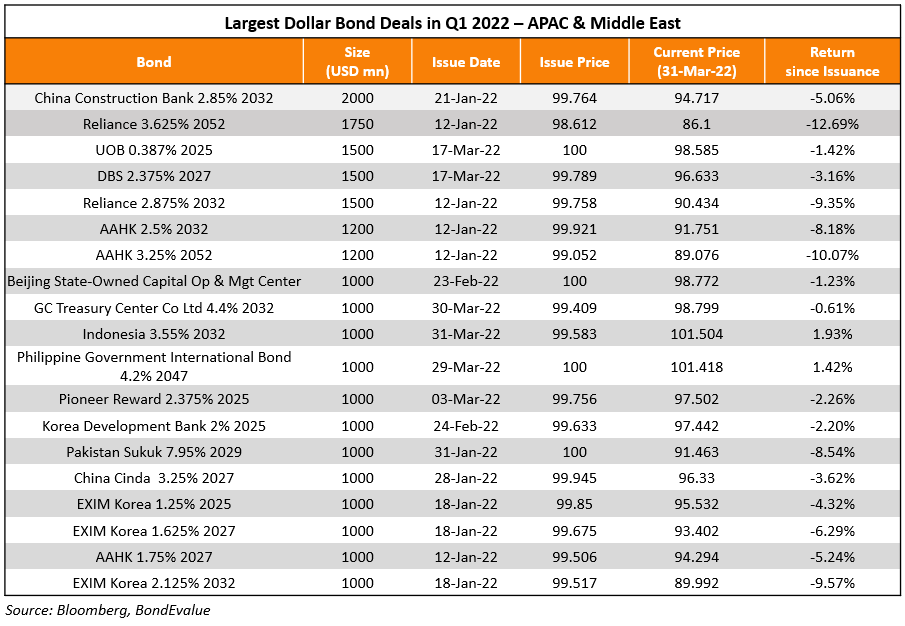 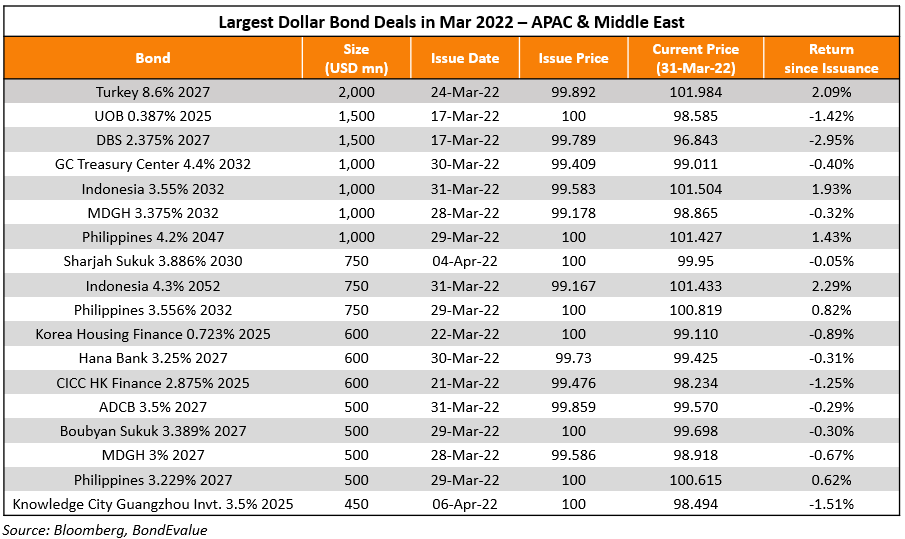 China South City’s dollar bonds rallied the most, by over 80% in Q1 2022 after it saw Shenzhen SEZ Construction and Development Group (SZCDG), an SOE make an equity investment of HKD 1.9bn ($245mn) helping the developer use the proceeds from the share placement to repay debt. Issuers that are closely linked to the commodities cycle like PBF Energy, Ecuador, YPF, Transocean etc. also saw their bonds trade higher. US Steel also benefitted from the rally in metals coupled with improving results. Also among the gainers were dollar bonds of select Chinese property developers like Redsun, Ronshine, Agile and Times China's bonds due in 2022 as worries over a near-term default reduced. However, longer dated bonds of these companies dropped.

Amongst the biggest group of losers globally in Q1 2022 were bonds of Ukraine, Russia and corporates/financials from these regions - VEB Bank, Alfa Bond, IMH Capital, CBOM, DME Airport to name a few, dropped over 90% to single digits. The ongoing Russia-Ukraine war brought about harsh sanctions from the US, UK and EU on Russian issuers. Besides, the sovereign bonds of Ukraine, Russia and Belarus (a key Russian ally used as a staging ground for the invasion) dropped over 80%. Also among the losers were the usual suspects, Chinese property sector companies -  Zhenro Properties whose dollar perp in particular dropped 89% to distressed levels of ~15 cents on the dollar citing liquidity issues and thereby its inability to be able to redeem the note. LatAm's Credito Real and saw its dollar bonds collapse after defaulting on its CHF-denominated bond whilst also reporting a large net loss of MXN 359mn ($17.7mn) in 4Q 2021. 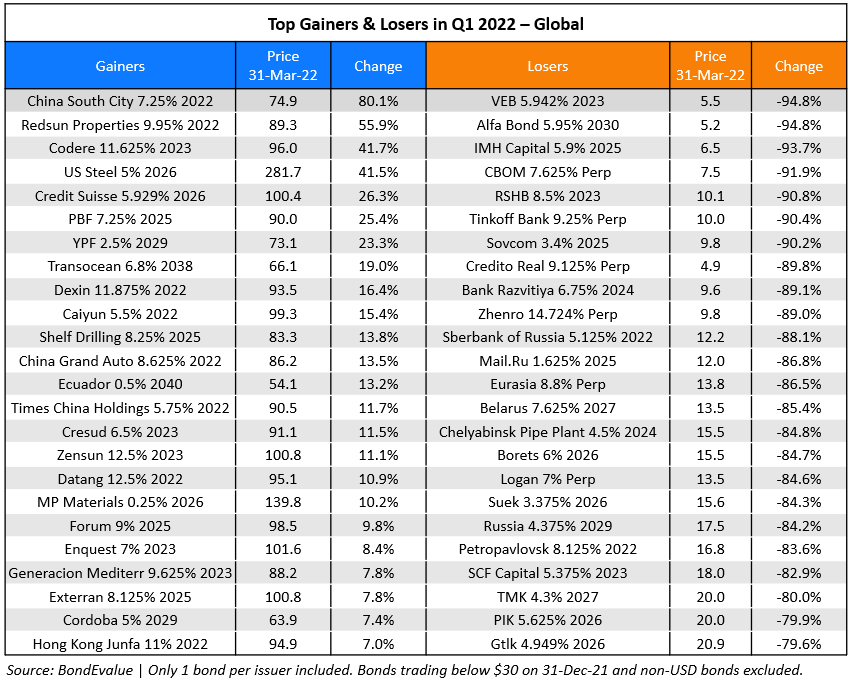 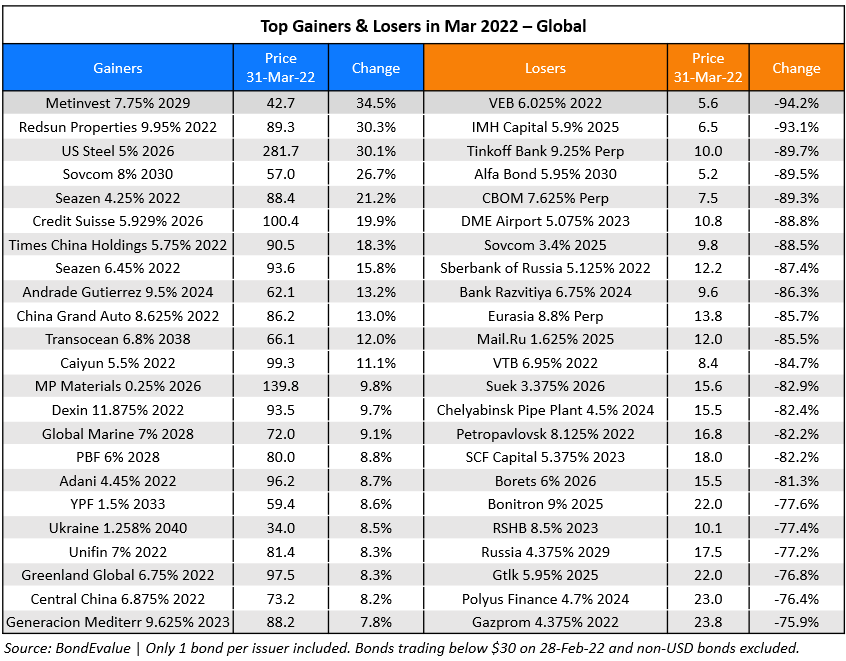 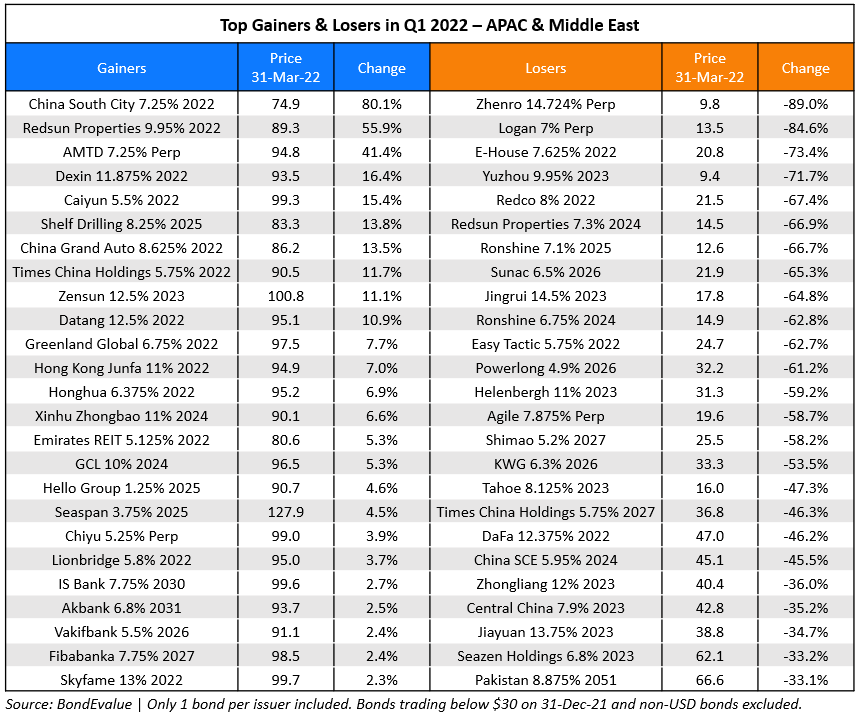 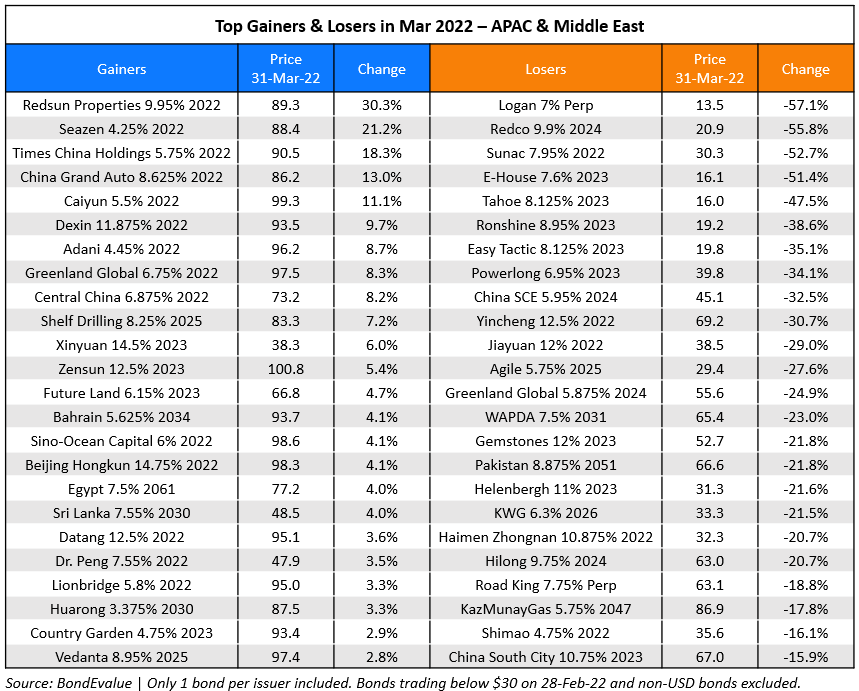