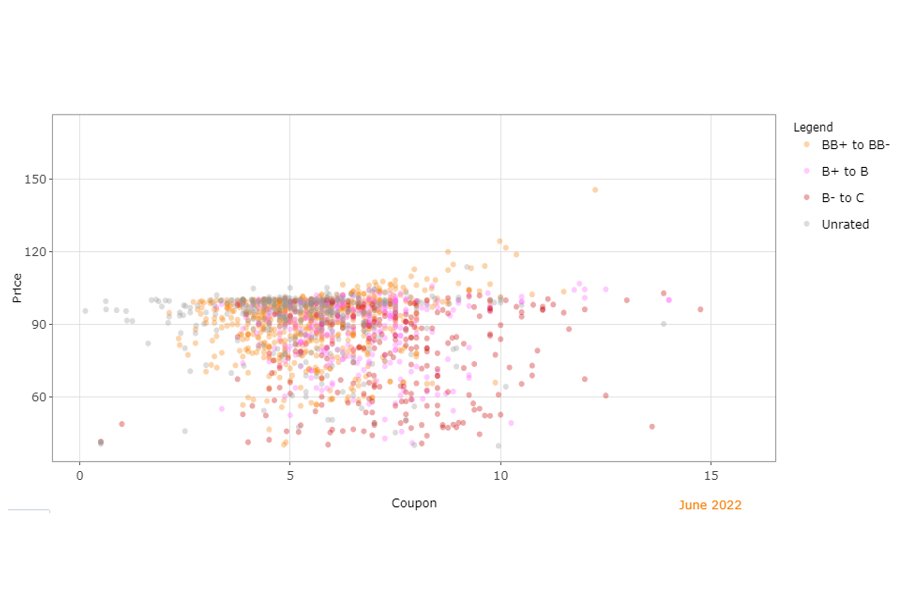 The second quarter of 2022 saw a marked drop in fortunes as 95% of all dollar bonds in our universe delivered a negative price return ex-coupon. This was following a similarly dismal Q1, when geopolitical risks and rising inflation pushed bond prices lower. Moving into Q2, inflation continued to rise with a record high print of 8.6% in May, the highest level since 1981. This pushed Fed rate hike expectations further, with the market pricing in a 96% probability of a 75bp hike at the June FOMC meeting. Prior to the CPI print, the probability of a 75bp hike stood at just 3%.
In line with expectations, the Fed hiked rates by 75bp at the 15 June meeting and guided for another possible 50-75bp rate hike in their end-July meeting if conditions remain the same. The rise in inflation continues to be driven by similar factors in Q1 with geopolitics and commodity price increases contributing. Commodity prices, as measured by the Bloomberg Commodity Index rose 9.8% from the beginning of Q2 till early June. The index has since dropped 10% due to waning demand as fears of a recession have slowly seeped in. Following the US Fed, other central banks such as the BoE, Banxico, RBI, HKMA, Central Bank of Brazil also raised rates during the quarter. The ECB too is poised to raise rates this month.

The US 10Y Treasury yield continued its climb higher, up 62bp in Q2 to take the YTD change to a solid 146bp. The Treasury curve remains flattish, similar to the end of the previous quarter. The extent of the move was similar across the curve with yields pushing higher across all tenors through the quarter. This is in contrast to the move witnessed in Q1 where the curve flattened and even inverted after an upward sloping curve at-end 2021. The 2s10s and 5s30s curves are both currently at 6bp and 15bp respectively.

In the interactive bar charts below, we have plotted quarterly returns of key dollar bond indices. The US High Yield bond index fell the most, by 8.8%, followed by the Emerging Market index, down 8.5% and the European corporate bond index down 8.4%.

In Asia, as expected, the China High Yield dollar bond index was the worst performer, down over 7.8%. This was followed by Indonesia, down over 7.7%. Hong Kong outperformed having fallen only 2.9% while Singapore and India were down 4.2% and 5.5% respectively.

With this backdrop of higher yields, rising inflation and geopolitical tensions, dollar bonds across the board have trended lower. In the interactive scatter plot below, we have plotted bond prices of Investment Grade (IG) dollar bonds on the Y-axis with the bonds' coupons on the X-axis - as of end-2021, Q1 and Q2 2022. Each dot represents a bond; hovering over it will give you details about the bond. You can click on "Play" or move the slider across the three periods to see how bond prices have trended.

Similarly for High Yield (HY) dollar bonds, we have compared prices across the three periods in the scatter plot below. Again, the decline in bond prices is prominent in Q2 vs. Q1 and end-2021.

We then plotted median price returns (ex-coupon) in Q2 2022 by industry. Sovereign dollar bonds led the decline, falling over 10% in the quarter ended June as inflation concerns across the globe weighed. The consumer sector (that includes the likes of consumer discretionary) also declined with inflation hurting both bonds and stocks. Commodity-linked sectors like Energy, Metals & Mining, Chemicals etc. declined ~7% even while commodity prices held steady and rose until mid-June. The second half of the month however saw commodity prices dropping over 10% with fears of a recession now taking over. Supranationals outperformed, falling only 1.4% followed by Banks and Financial Services, down about 2.5-3.5%.

Chinese property developers who typically contribute to a large chunk of issuances were yet again gummed up from dollar bond markets as credit rating downgrades, maturity extensions, information disclosure issues, delays in financial statement publications and defaults continued to weigh on investor sentiment towards the sector. The sole Chinese property sector bond issuance came from Sino-Ocean which raised $200mn via an SBLC-backed bond, the first issuance by a Chinese developer since January (which also saw an SBLC-backed bond by Greentown China).

The largest deals during the quarter was led by Amazon’s $12.75bn seven-part jumbo issuance in April, which is the second largest deal yet in 2022, following AT&T-Discovery’s $30bn 11-part deal in Q1. Banking majors dominated issuance volumes led by JPMorgan that raised $8.5bn via a four-trancher in April and another $4.5bn via a three-trancher in June. This was followed by BofA, Morgan Stanley and Citi raising $8.75bn, $7bn and $6bn respectively, all via four-part issuances each. Other large deals were led by Intercontinental Exchange (ICE Group) raising $8bn via a six-tranche deal, KfW's $5bn issuance and France’s CADES raising $3.5bn.

Among the prominent deals was Credit Suisse's AT1 issuance in June - it raised $1.65bn via a 9.75% PerpNC5.5 AT1 bond which was priced at a juicy new issue premium of 81.3bp over its comparable bonds. To read more about the Credit Suisse AT1 issuance, click here. 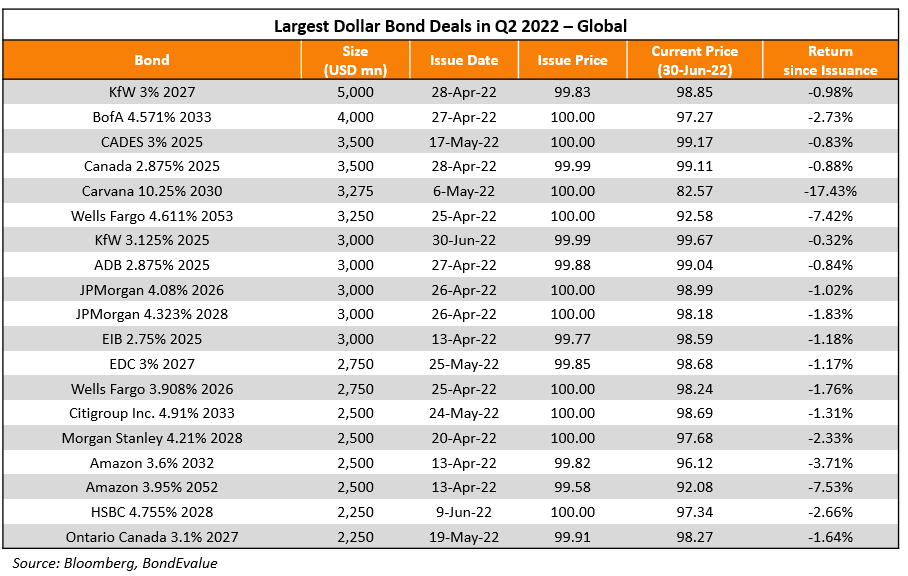 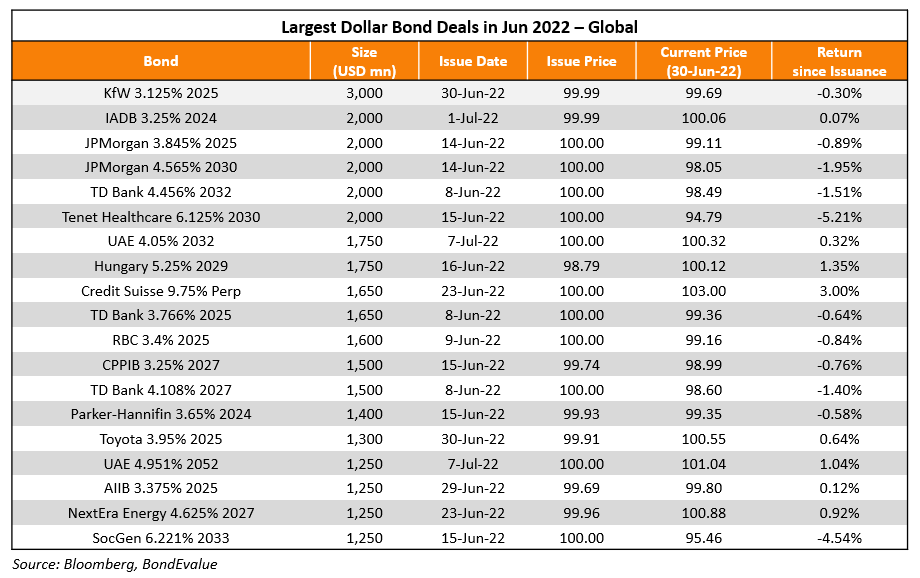 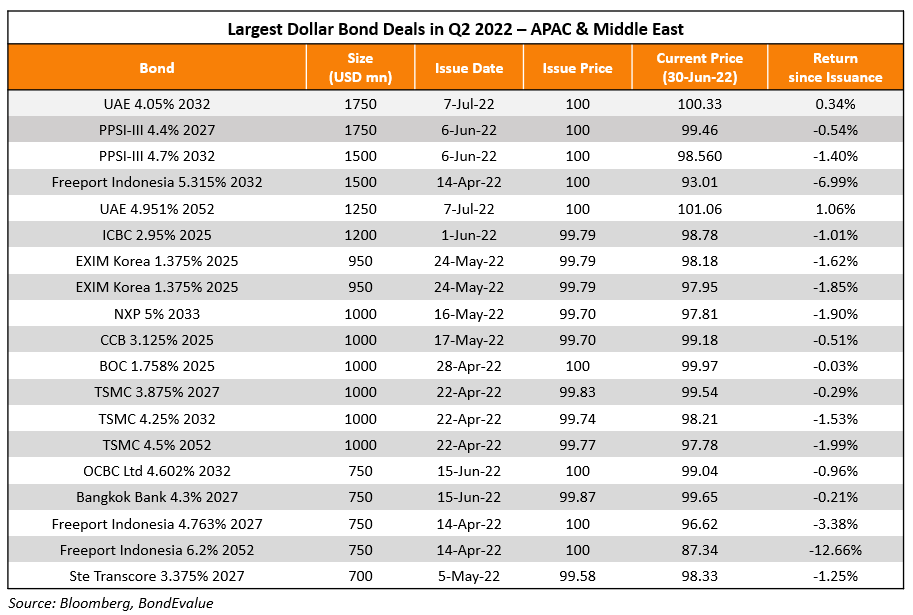 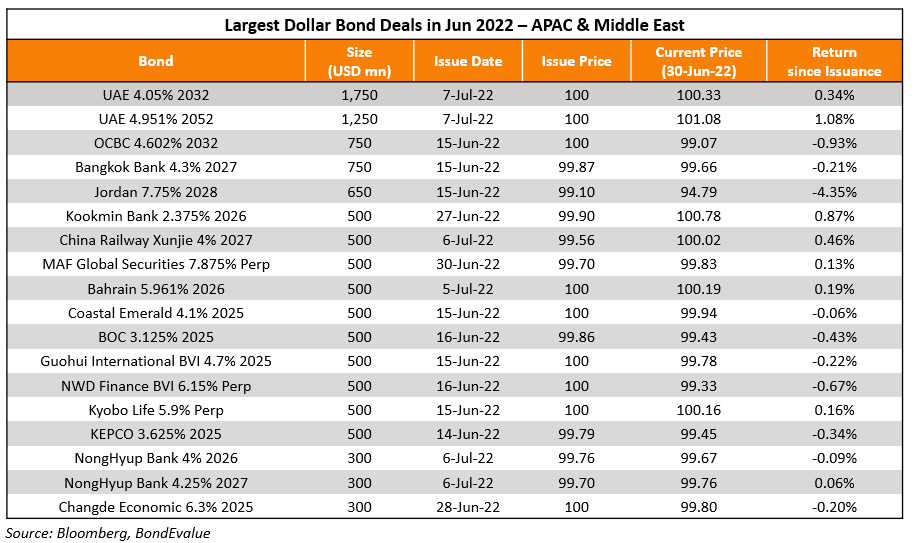 Ukrainian state-owned natural gas company Naftogaz’s lender Kondor Plc’s dollar bonds prices rallied the most, by 2.67x in Q2 2022. The EBRD agreed to lend up to €300mn to Naftogaz to compensate for loss of natural gas production and to boost Ukraine’s energy security amid the Russia-Ukraine war. Other Ukranian firms such as Metinvest, VF Ukraine, DTEK bonds also trended higher. Russia’s Steel Funding, Gazprom and Rusal's bonds also gained significantly. Issuers that are closely linked to the crude oil like Rio Oil, Tullow, Lukoil  saw their bonds trade higher as oil prices remained strong at over $110/bbl.  Dollar bonds of Unifin Financiera were higher as it received a $500mn equivalent credit line in pesos from Credit Suisse.

Amongst the biggest group of losers globally in Q2 2022 were bonds of Sovcom which fell over 80%. Due to sanctions, the bank made coupon payments in Rubles which were not allowable as per its bond contract. Similarly, Celtic Resources fell almost 70%, after facing US sanctions due being owned by a Russian group.  Future Retail's dollar bonds dropped almost 80% as Reliance scrapped its bid after nearly 70% of Future Retail’s secured creditors voted against the sale of the retailer to Reliance. Revlon's bonds collapsed on filing for bankruptcy and was downgraded to D by S&P. Bonds of Bed Bath & Beyond kept trending lower through the months as concerns about the company's financial strength weighed on it. The American merchandiser reported another quarterly decline in sales, down 25% and a net loss of $358mn during the quarter. Besides, the economic crisis in Sri Lanka and its default led to a drop in its dollar bonds. Sovereign bonds of Argentina, El Salvador, Ecuador and Nigeria also lower on inflation, political and funding related uncertainties. 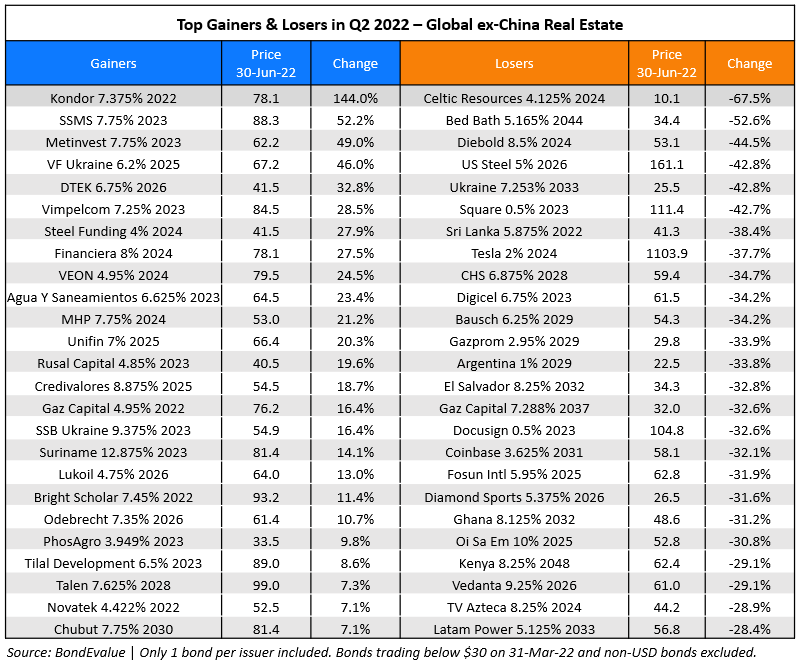 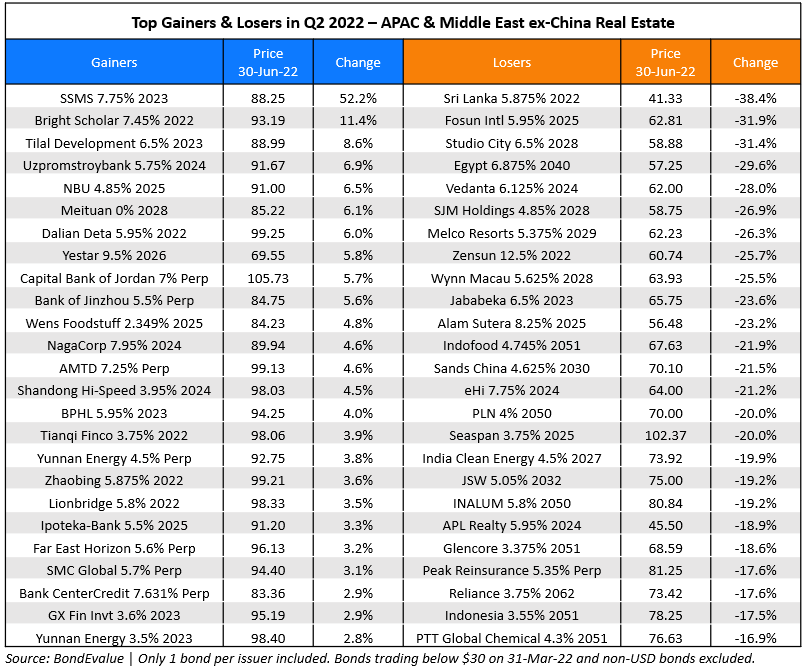 In the China real estate space, among the gainers were dollar bonds of select developers like Yincheng, Central China and Agile's bonds due in 2022.  Agile made repayments on two of its outstanding loans, helping cool negative sentiment on a near-term default. Among the biggest losers were Skyfame Realty's bonds that lost ~86% to fall to 12 cents on the dollar. Skyfame warned of a default after citing distressed liquidity. Among higher rated developers, Country Garden was downgraded to Ba1 and became a fallen angel with its bond prices declining. It is now rated as a high yield issuer by both Moody’s and S&P at Ba1 and BB+, while Fitch is the only rating company to hold an investment grade status on the developer at BBB-. Also, Sino-Ocean's dollar bonds fell over 40% as the negative sentiment caught on high-grade developers too with rumors of refinancing stress even as the company clarified it was not facing stress. The developer is now under review by Moody's for a downgrade with a possibility of becoming another fallen angel. 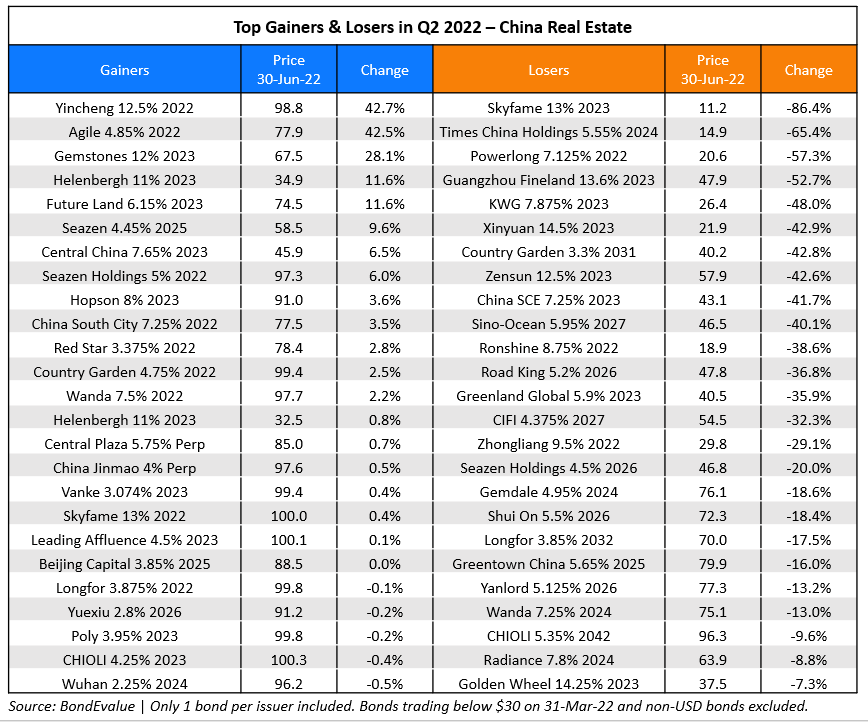