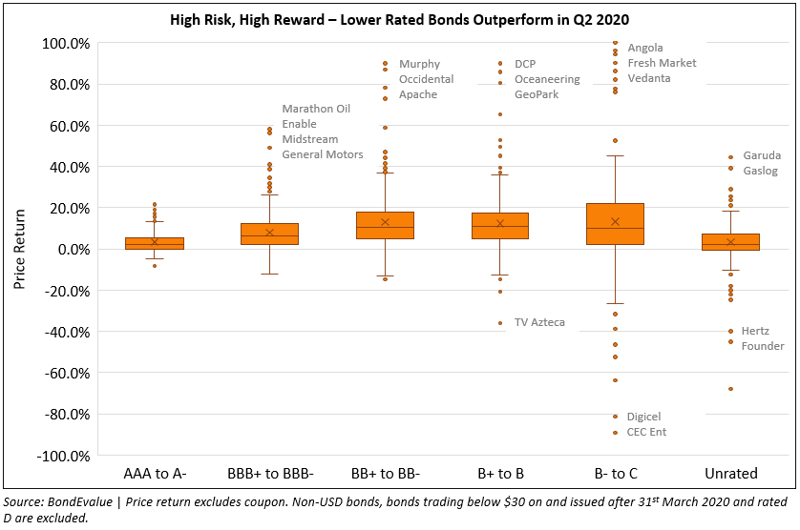 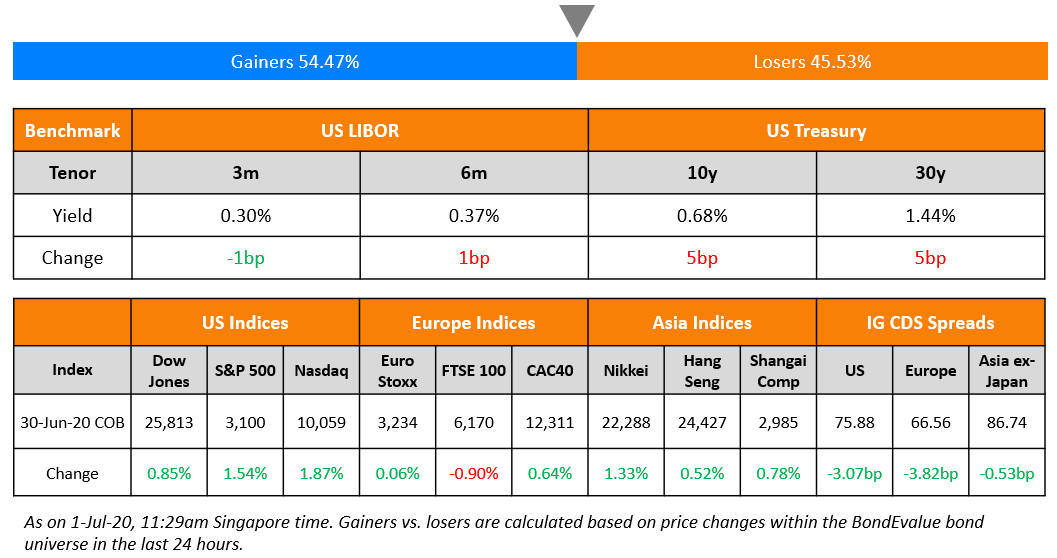 It was the best of quarters, it was the worst of quarters. As Q2 2020 came to a close, many equity markets saw some of their best performances this quarter despite the world being in the midst of a pandemic that has impacted almost every individual, business and government. Central banks have taken never-before-seen stimulus measures to tackle a drop in economic activity during a time when most of the world came to a standstill. The question now is simple – can we go back to normal, and if so, will the curve that was flattened change its course. The US is leading the pack in many ways related to the virus, but crucially, they seem to be the most eager to re-open. The numbers show that this might have been premature in some states. Dr Antony Fauci spoke to a senate hearing yesterday and warned that daily new cases could double and hit 100,000 if the current course continues.

Economic data was mixed – US consumer confidence was up at 98.1 vs. 85.9 in May, China’s purchasing managers index came in at 50.9 for June showing some expansion, and BoJ’s Tankan survey came out this morning at -34 for June vs -8 prior showing business sentiment among large manufacturers at its lowest level in a decade. Investment grade credit spreads have enjoyed a decent rally this quarter after the massive widening in March, but the last few weeks have seen these spreads move sideways mostly. Wall Street had a decently strong finish on the last day with indices up 1-1.5% and US treasury yields were also slightly higher by a few basis points. Asian markets are opening slightly higher with muted activity as it is a Hong Kong holiday today.

The below table shows the performance of major equity indices for the last 2 quarters along with YTD. 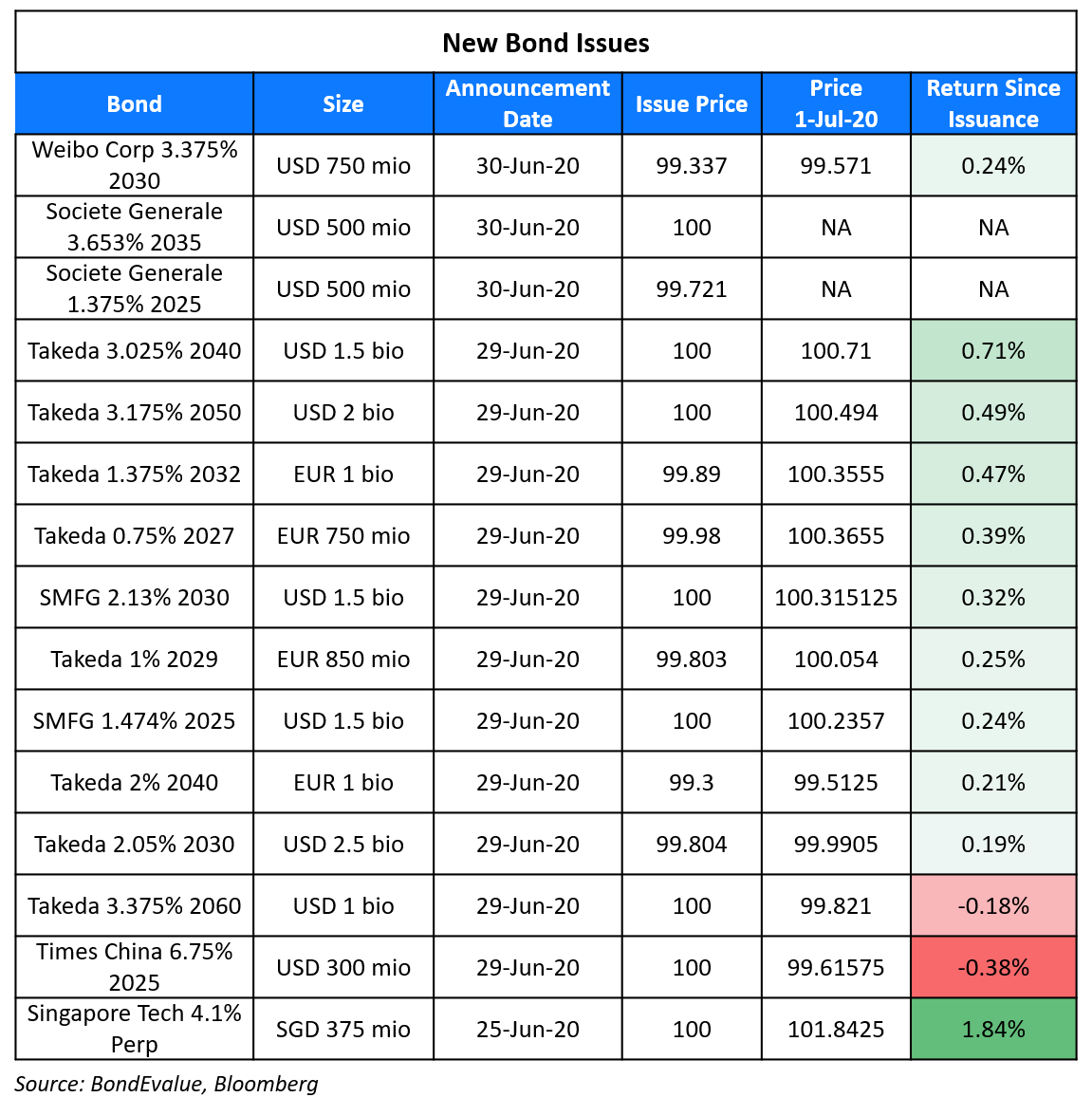 The second quarter (Q2) of 2020 witnessed a rally in the bond markets with 81% of dollar bonds in our universe delivering a positive price return (ex-coupon). The strong rally resulted in a mark-to-market (MTM) gain of $225.7bn, calculated by multiplying bonds’ price change with its amount outstanding. This was in stark contrast to the first quarter (Q1), which saw 82% of dollar bonds in our universe delivering a negative price return leading to an MTM loss of $182.2bn. Investors witnessed gloom across financial markets in mid-March as fears of the pandemic grew. With the benefit of hindsight, one can observe that those fears were short-lived.

The box and whisker plot below shows how bonds moved in price terms (ex-coupon) in 2Q by credit rating. The horizontal line inside each of the six boxes indicates the median price return, while the box area above and below it represents the upper and lower quartile respectively. The dots that fall above and below the bounds are outliers with each dot representing a bond. 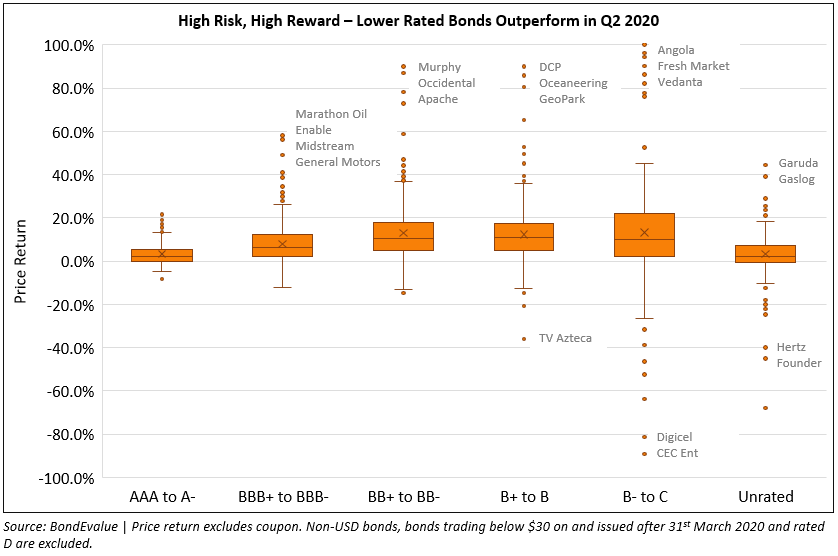 We have summarized the number of bonds with a positive price return in Q2 – by rating – in the table below. 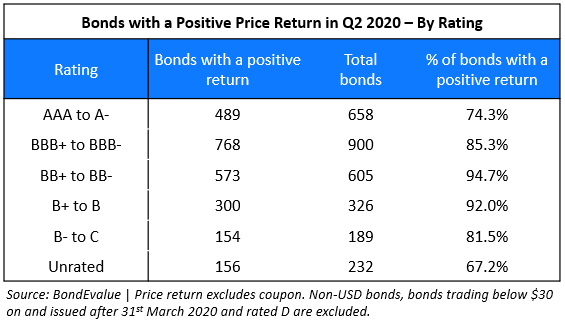 The pandemic and global lockdowns put a strain on the financials of corporates. This led to a surge in global bond issuance to $646.4bn, a record quarter, as corporates rushed to tap the primary bond markets to raise capital. The charts below summarize monthly issuance volume. 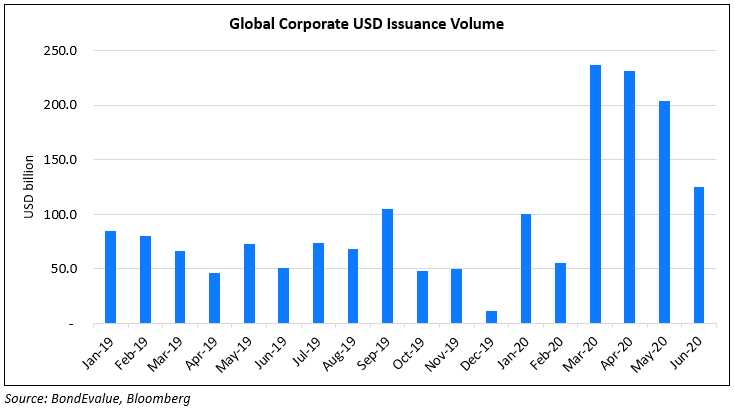 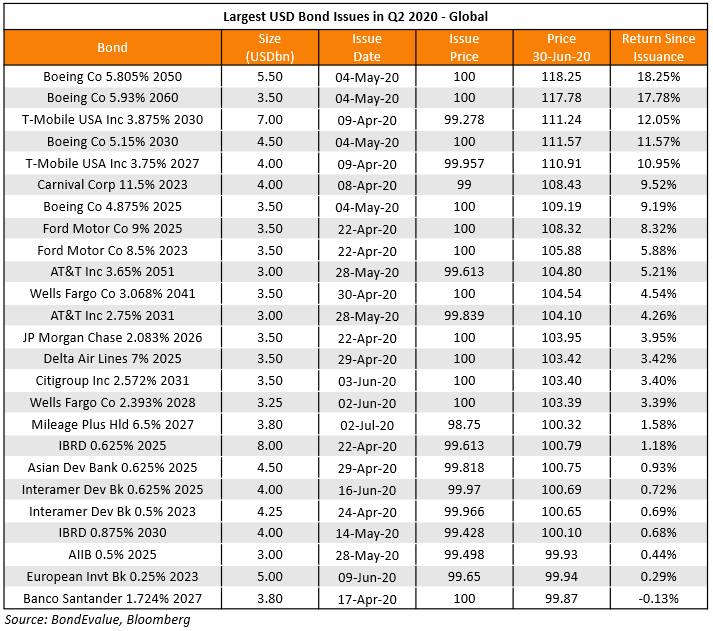 Sovereigns and state-owned corporates dominated the largest dollar deals in Asia in Q2. Petronas led the pack, yielding a massive 37%/27% in terms of MTM return to investors that bought the bond at issuance. This was followed by Indonesia sovereign and INALUM bonds, which yielded double-digit returns for investors. 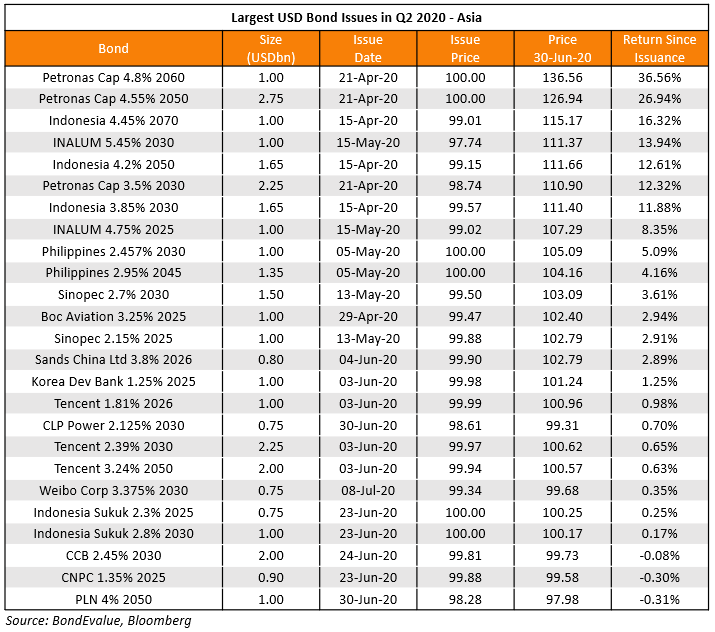 We have summarized the top gainers and losers within our universe based on price change in Q2 in the tables below. 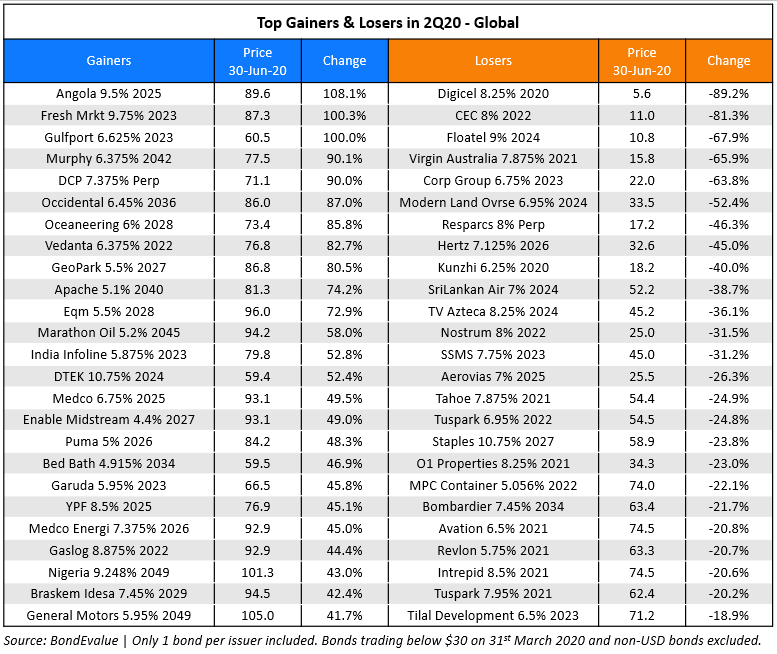 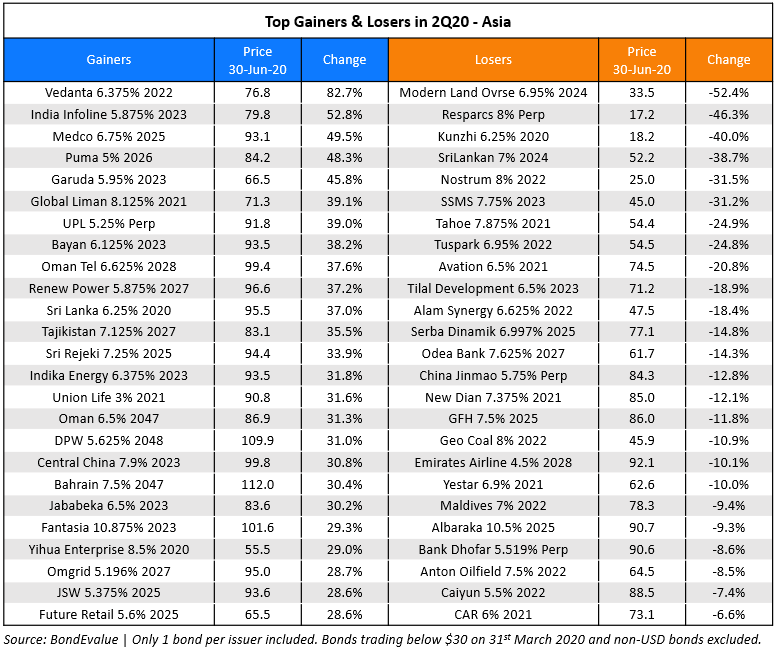 Vedanta Resources’ bondholders agreed to amendments of certain covenants on its dollar bonds, which were proposed on June 5. The proposed amendments were to allow the mining company more flexibility to incur debt as its chairman Anil Agarwal takes the India-listed subsidiary Vedanta Limited private. Vedanta received consent from holders of the following bonds:

Thyssenkrupp Elevators is in the process of raising a bond and loan package of €7.6bn, up from the original proposal of €7.1bn. The euro-denominated secured and unsecured bonds are expected to offer a coupon of 4.5-4.75% and 6.75-7% respectively. The company is rated BB- by Fitch and S&P and B1 by Moody’s, falling in the junk category. The covenants for the new bonds have been advised by US law firm Kirkland & Ellis, which is infamous for offering highly favorable terms to private equity sponsors at the cost of the debt investors. One such term in the Thyssenkrupp Elevators’ original covenant package included a clause as per which the owners were allowed to move assets into a subsidiary out of reach of the bondholders. This has not been taken kindly by high yield bond investors, who have asserted that controlling shareholders can potentially exploit loopholes in the term sheets to their advantage. Covenants have been a bone of contention between private equity (PE) firms and investors in junk-rated debt, especially in the wake of the ongoing pandemic. This has forced Advent and Cinven, the PE firm involved in the leveraged buyout (LBO) of the elevator major, to radically change the term sheet to close the potential loopholes and strengthen the covenants from the bondholders perspective. The PE is acquiring Thyssenkrupp Elevators for €17.2bn with an initial proposal of a debt finance to the tune of €7.1bn, as reported by us a couple of days back.

Banca Monte dei Paschi di Siena (BMPS or MPS) traces its history to 1472 and is regarded as the world’s oldest bank. The fourth largest Italian bank is reported to be exploring merger options while Italy’s Treasury Ministry looks at selling its controlling stake in the bailed out bank. MPS is also trying to restructure its debt and has plans to rid itself of €8bn in bad loans, which would potentially lower its risk profile and reduce its debt below 5% of total lending from the current 12.4%. BPM is seen as a strong contender for the proposed merger deal. In a related news Italy’s fifth largest bank, UBI Banca is likely to take over Intesa Sanpaolo, which is Italy’s second largest bank. BMPS bonds have been trading in the green since the massive drop of March. 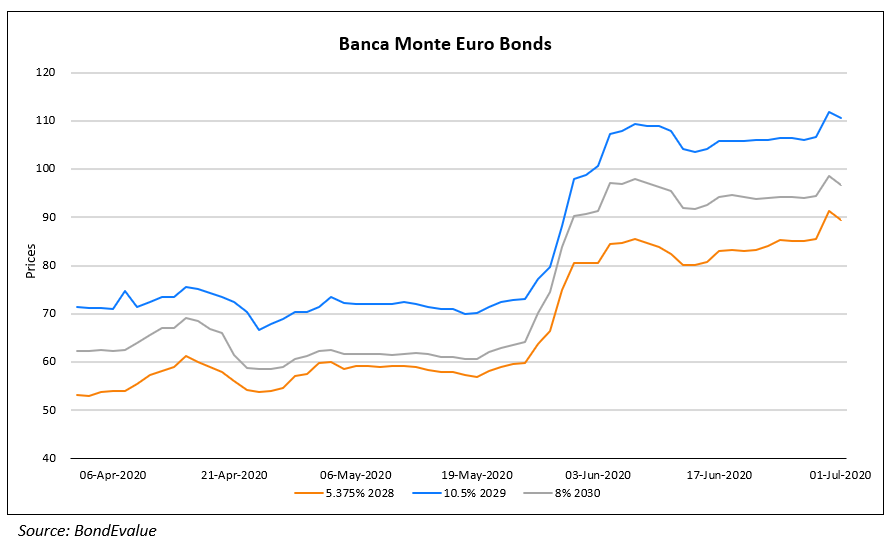 “We still have some margin to reduce interest rates, but of course we have to do this in a very careful way,” Javier Guzman said days after the central bank lowered its policy rate to 5% in its fourth straight half-point cut. Mexico’s economy will shrink 10.5% this year, more than Brazil, Russia, South Africa and India, according to the International Monetary Fund. Despite the negative outlook, Guzman said that central bankers remained “confident about the strength of the financial system.”

On Argentina’s ‘Bad Faith’ – Robert Gibbins, founder and chief investment officer of Autonomy Capital and one of the key international holders of Argentine bonds

Robert Gibbins is calling for stronger protections for investors to guard against “flagrant abuse” of their terms, reflecting the lack of trust hampering negotiations after the country’s ninth government debt default.

Mr Gibbins claims that the government is “misusing the collective action clauses (CACs) (Term of the day, explained below) at every step”, threatening to exclude certain series of bonds from the votes, even after they are cast, to ensure it meets the agreement thresholds. Bondholders are pushing for a wholesale return to the 2005 legal terms, but Martín Guzmán (the economy minister) has pushed back at this request, saying it would undo “the progress that has been made over the past few years in terms of the contractual language”.

Collective Action Clause (CAC) refers to a contractual provision that allows the majority of bondholders to agree on debt restructuring even when some are against restructuring. The important aspects include the following.

Some other CAC include: 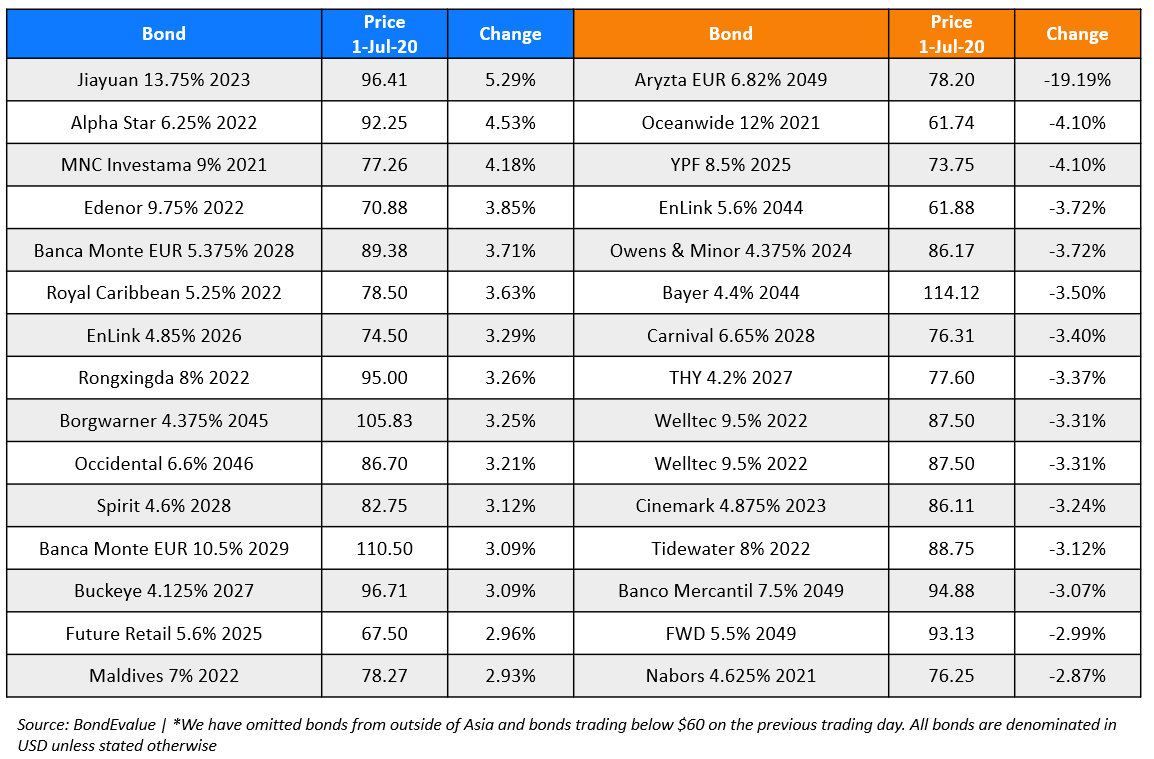