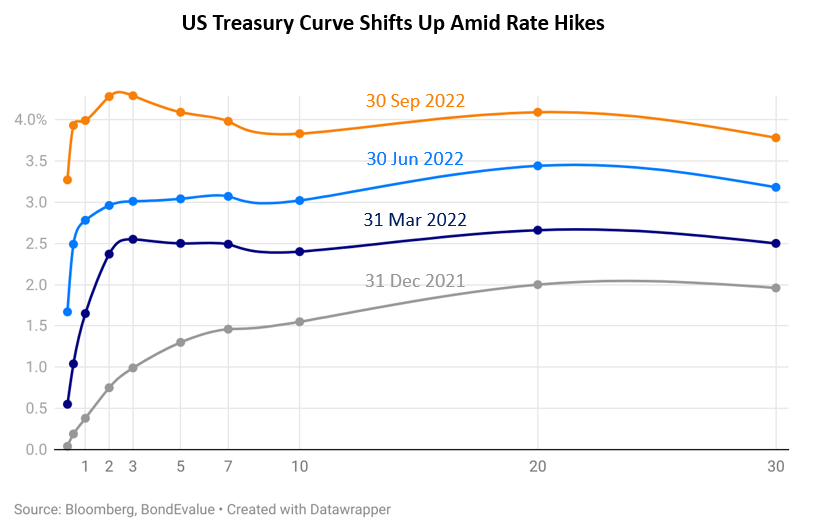 The third quarter of 2022 saw a marked drop in fortunes as 94% of all dollar bonds in our universe delivered a negative price return ex-coupon. Bond investors lost a staggering $105bn in terms of notional losses, calculated as the sum of Q3 price returns multiplied by the amount outstanding for all dollar bonds in our universe. This was driven by persistently high inflation and tight monetary policy led by the Fed, who raised rates by a total of 150bp in Q3, following 125bp of rate hikes in Q2. The Fed Funds rate currently stands at 3.00-3.25% with more room for further hikes – the peak Fed Funds rate currently stands at 4.47% for the March 2023 FOMC meeting.
US Treasury yields moved up across the curve through the last three quarters, as seen in the chart above. While the 2Y rose 132bp to 4.28%, the 10Y moved 81bp higher to 3.83% in Q3, taking the YTD change to a massive 353bp and 228bp for the 2Y and 10Y respectively. The Treasury curve is now inverted with the front-end yields higher than the long-end yields – the 2s10s curve is currently at -45bp, as compared to a flat curve at the end of Q2.
The sharp upmove in benchmark yields weighed on IG dollar bonds with 96% ending the quarter in the red. Of the 4% IG dollar bonds that ended the quarter higher, approximately 70% had a duration of less than 1 year, maturing or callable within the next year. The gains from most of these bonds seem to be largely an effect of the pull to par effect. In comparison, 89% of High Yield (HY) dollar bonds ended the quarter in the red. Generally, the performance was similar to the prior two quarters where 95% of dollar bonds were in the red. This quarter was dominated by rising inflation and aggressive central banking policy that pushed bond prices lower. US and global inflation particularly in developed markets rose above market expectations that led to central banks tightening policy with sharp rate hikes. Besides the Fed, the ECB also hiked its benchmark rate, by 50bp and 75bp in its July and September meetings.

With this backdrop of extreme monetary tightening by central banks leading to higher yields, alongside rising inflation, dollar bonds across the board have trended lower. In the interactive scatter plot below, we have plotted bond prices of IG dollar bonds on the Y-axis with the bonds' coupons on the X-axis - as of end-2021, Q1, Q2 and Q3 2022. Each dot represents a bond; hovering over it will give you details about each bond. You can click on "Play" or move the slider across the four periods to see how bond prices have trended.

Similarly for HY dollar bonds, we have compared prices across the three periods in the scatter plot below. Again, the decline in bond prices is prominent in Q2 and Q3 as compared to Q1 and end-2021.

Chinese property developers who typically contribute to a large chunk of issuances were yet again largely locked out from dollar bond markets as credit rating downgrades, defaults and restructuring news continued to weigh on investor sentiment. The third quarter saw no issuances by Chinese property developers. In Q2, the sole property sector bond issuance came from Sino-Ocean which raised $200mn via an SBLC-backed bond, the first issuance by a Chinese developer since January (which also saw an SBLC-backed bond by Greentown China).

The largest deals during the quarter was led by Meta's and BofA's $10bn jumbo multi-tranche issuances. Banking majors dominated issuance volumes led by JPMorgan that raised $8bn via a four-trancher in July, followed by Wells Fargo and Morgan Stanley's $7.25bn and $4bn two-tranche deals in July. Besides, UBS raised $5bn via a three-tranche deal, followed by HSBC and Credit Suisse raising $4.75bn dual-trancher each in August. 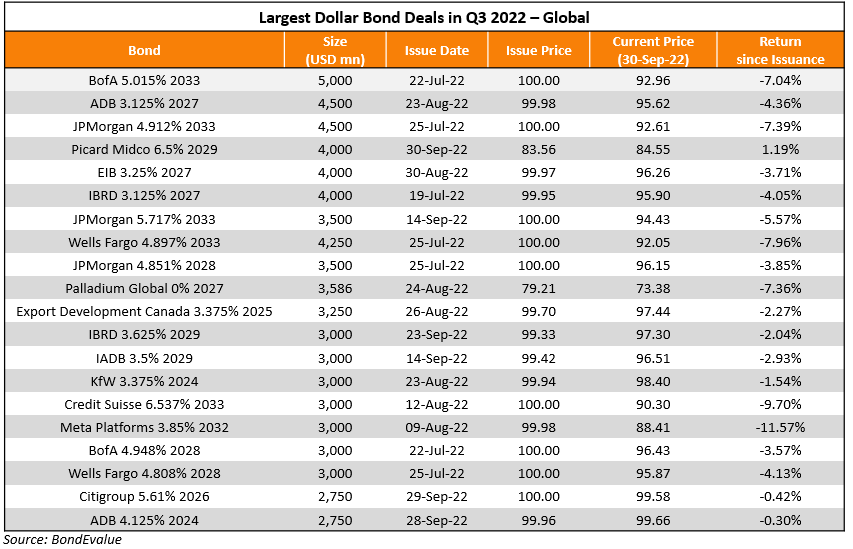 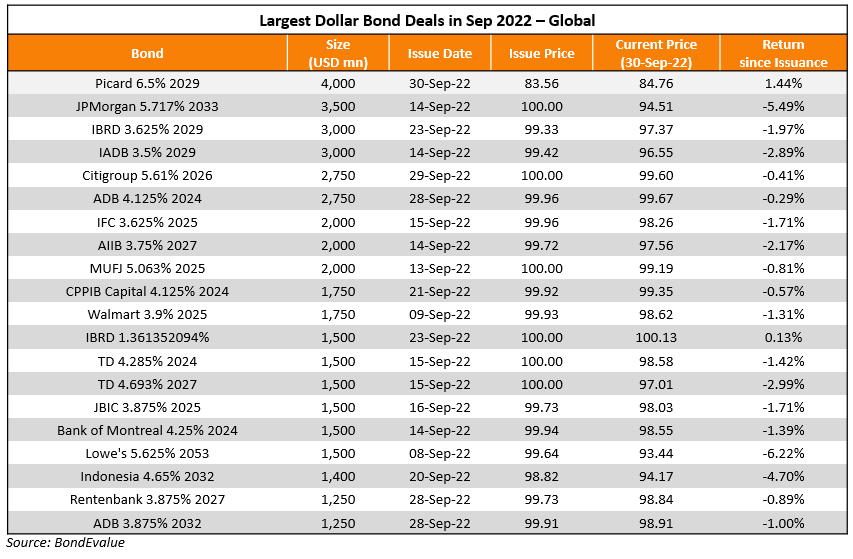 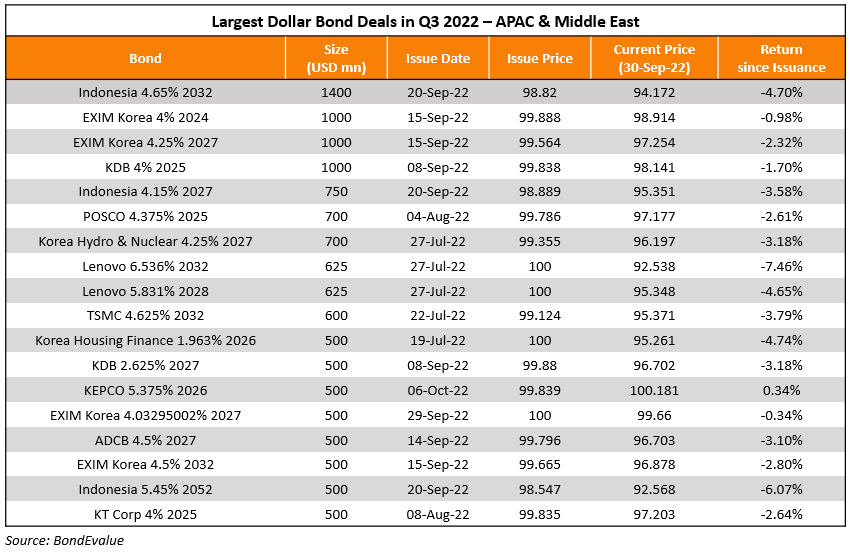 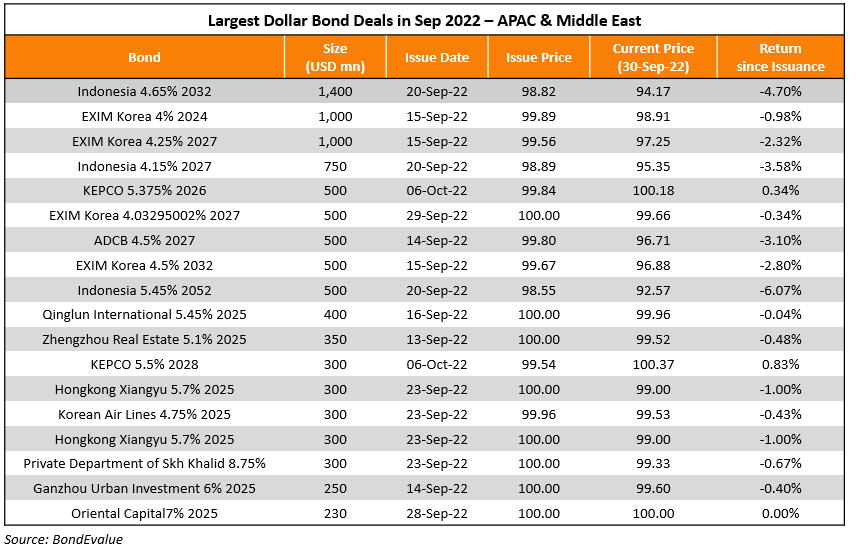 In Q3 globally, Russia's sovereign and corporate dollar bonds were among top gainers. Russian government dollar bonds have in fact more than doubled ever since the US Treasury opened a three-month window for banks to help investors holding Russian bonds to wind down their positions. Also CDS auctions on its offshore bonds determined a settlement price of 56.125 cents on the dollar, much higher than what it could have been in the immediate aftermath of the invasion. Moscow based PhosAgro's (Europe’s phosphate-based fertilizers' largest producer) 2023 note rose 77.6% as it posted robust 1H 2022 results and launched a consent solicitation to modify its payment mechanism. State owned oil & gas major Gazprom (Gaz Capital) saw its notes surge over 67% on strong earnings, reporting a record net profit of RUB 2.5tn ($41.8bn) in 1H 2022 as average exporting gas prices increased more than 3.5x YoY. Similarly, gas producer Novatek’s bond due December 2022 was 52% higher and energy company Lukoil's notes were up 39% after it sought to repurchase $6.3bn of its outstanding bonds. Petropavlovsk witnessed its bonds due in November 2022 surge 29% on the completion of the sale of its principal asset and expectations of timely repayment of debt. Canadian plane manufacturer Bombardier was upgraded and posted reduction in losses, reflecting in a 20% gain in its bonds. Argentina's 2038s were up 57%, during September as it struck an agreement with the Inter-American Development Bank (IADB) where the latter will extend financing to the nation for almost $5bn in 2022 and 2023. El Salvador's dollar bonds jumped over 40% as the nation completed a $360mn buyback of its dollar bonds.

Amongst the biggest group of losers globally in Q3 2022 were bonds of Unifin which tanked over 90% as it suspended all coupon and principal payments on its debt, post which it was downgraded to RD from C by Fitch. American retailer Bed Bath & Beyond’s bonds fell over 60% as concerns about the company's financial strength and weak earnings weighed on it. Pakistan’s sovereign dollar bonds due in 2027 declined 44% as the country grappled with weak finances - its forex reserves now barely cover one month of imports, after being hit by devastating floods. The nation's Prime Minister Shehbaz Sharif said that “all hell will break” if they do not get a “substantial relief” on their debts, that led to further declines in its bonds. Ecuador's dollar bonds fell 41% as the nation is discussing debt restructuring with lenders. During Q3, Ghana was downgraded and its dollar bonds were down ~25%. Ukraine state owned Naftogaz financing arm Kondor’s bonds dipped over 30% as bondholders rejected the company's proposal to suspend its debt payments for 2 years. Chinese conglomerate Fosun International also saw its dollar bonds drop over 35% as reports said that China’s regulators asked its biggest banks to examine their exposure to the conglomerate. The company was also downgraded due to its reducing liquidity buffer. 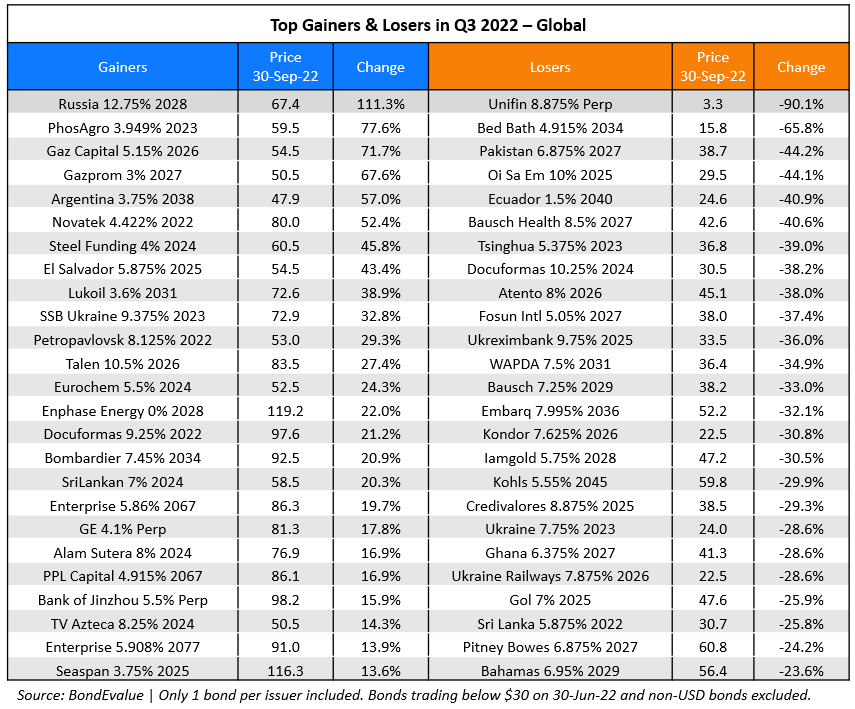 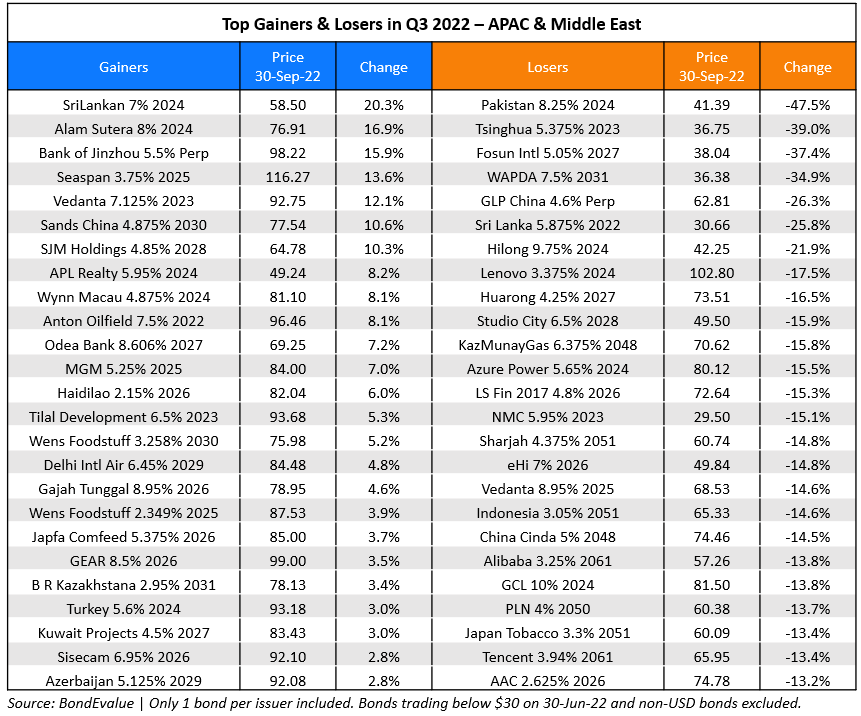 In the China real estate space, among the gainers were dollar bonds of select developers like Greenland Global, Road King and Wanda's bonds due in 2022 and 2023. Some of the property developers' bonds gained on reports of Chinese local authorities rolling out incentives and stimulus measures to spur home sales. Among the biggest losers were Skyfame Realty's bonds that matured in July, which lost 85.7% to fall to 14.3 cents on the dollar. Skyfame defaulted after citing distressed liquidity and said that it now seeks provisional liquidation and debt restructuring. CIFI Holdings' bonds sharply fell 79.1% on a report that the developer defaulted on an onshore trust loan and its ratings were downgraded to BB- from BB with a negative outlook by Fitch. Country Garden (COGARD) and Sino-Ocean's ratings were downgraded and fell alongside CIFI's bonds, dropping 47.3% and 44.1% respectively. Tuspark launched a consent solicitation on two of its dollar bonds which led to the initial rally of its bonds. However, a bondholder group has planned to reject its proposal, due to which its bonds fell over 39%. 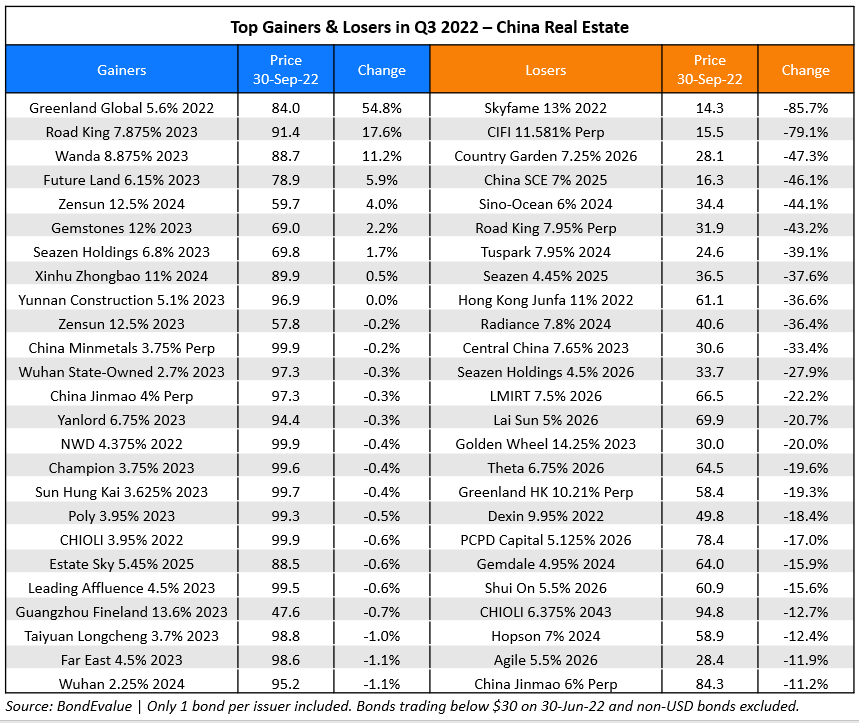