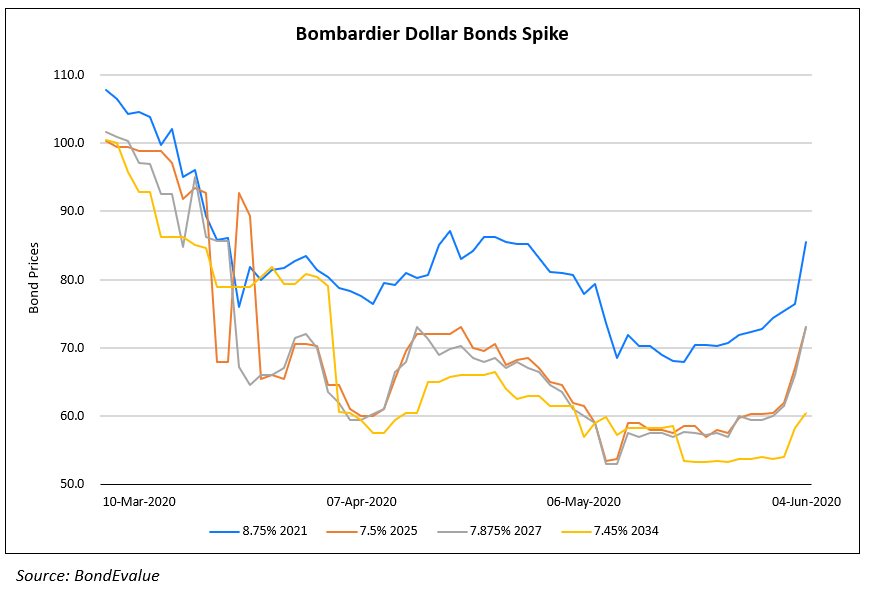 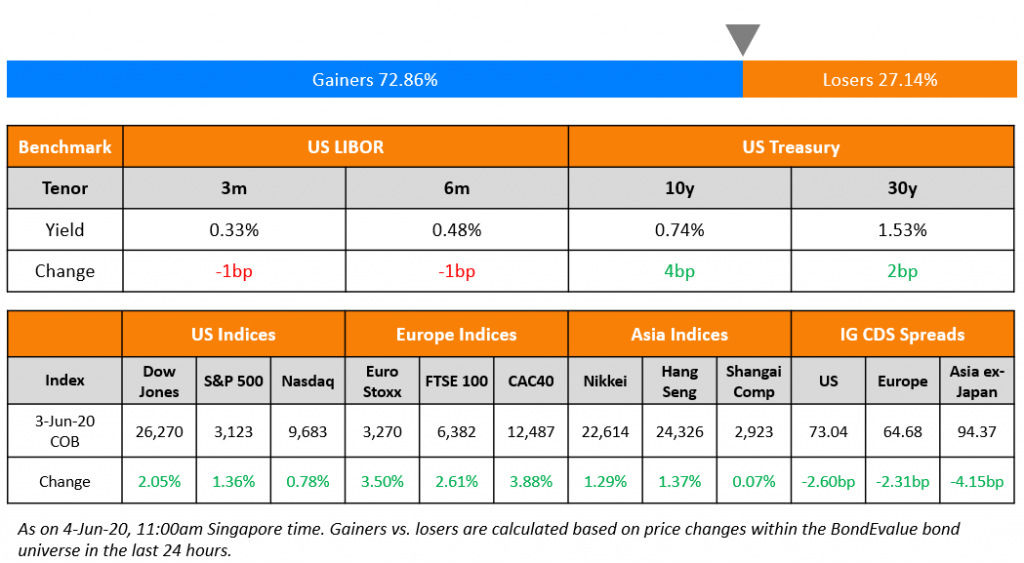 Markets continue their rally overnight as expectations of a safe reopening are bolstered. US private sector jobs declined by 2.76mn, far lower than the expected 9mn number. Although not as accurate, this number bodes well for Friday’s Non Farm Payroll and today’s Initial Jobless claims. Other upbeat data included better than expected US, China and Eurozone May PMI numbers. The positive sentiment reduced demand for US treasuries and yields continued to climb with the curve steepening (Term of the day, explained below) a bit as investors showed less favor in the 30Y. CDS spreads tightened across the board. 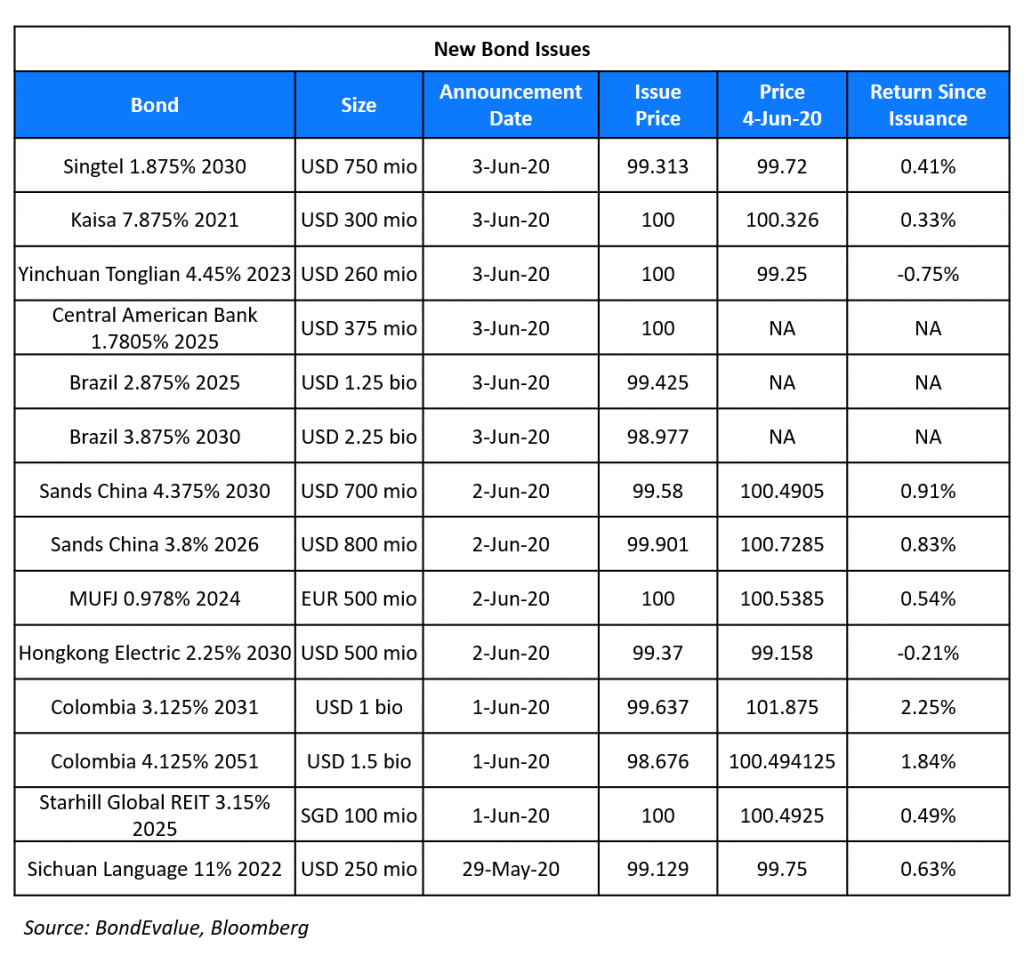 Singapore’s state-owned telecom company Singtel raised $750mn via 10Y bonds at a yield of 1.951%, 123bp over Treasuries and 52bp inside initial guidance of T+175bp area. The bonds, expected to be rated A+/A1, met with strong investor demand as orders exceeded $4.1bn, 5.5x issue size. Singtel last raised a 10Y dollar bond in Aug last year at a yield of 2.459%, 90bp over Treasuries at the time of issuance. The old 10Y bonds are currently trading at a yield of 1.93% on the secondary markets.

Chinese local state-owned company Yinchuan Tonglian Capital raised $260mn via 3Y at a yield of 4.45%, 30bp inside initial guidance of 4.75% area. The bonds, rated BBB by Fitch, received orders worth $900mn, 3.5x issue size, at the time of final guidance. The bonds will be used for refinancing as the company has a $300mn 3.5% bond due in July.

American Airlines Group Inc. Downgraded To ‘B-‘ On Steep Demand Decline Due To The Coronavirus, Outlook Negative

America’s largest airline by fleet size, American Airlines was downgraded by S&P Global Ratings to B- from B. This is the third downgrade by S&P for the airline since March this year. The rating agency said that a continued decline in airline bookings on the back of the pandemic would lead to a substantial cash flow deficit for the airline in 2020, although it does expect the company to return to positive cash flows in 2021. While the airline is taking measures to offset the decline in demand, S&P believes that these initiatives will not be sufficient to offset the impact of the pandemic. S&P added that it expects air traffic to start to recover in the second half of 2020. A delay in the recovery would further weaken American Airlines’ credit metrics. The airline’s 5% bonds due 2022 inched higher by 2.75 points to 67 cents on the dollar. Its 3.75% bonds due 2025 and 3.375% bonds due 2027 remained stable at 51.4 and 78.1 cents on the dollar respectively.

Fed Bond Purchase Program Not Launched Yet, But Any Takers?

After the Fed announced a slew of stimulus programs around ten weeks ago, markets stopped the panic selling, and started what is now a record surge in new corporate bond sales. Although the Fed has purchased around $3bn in ETFs through Blackrock starting mid May (around 38% of which are in Blackrock funds), the Fed has not yet launched the program to buy a limited amount of corporate bonds directly in both the primary and secondary market. But it is unlikely that this program will find any takers right now due to two reasons. The first reason being the stigma associated with signing up during a market rebound as showing a sign of weakness. The second being that participating now would limit how much more the Fed can buy later in the event of another coronavirus wave.

Coronavirus Bonds Seem to Be the Pick of Investors; Issuance Reaches $151bn

Investors seemed to favor “coronavirus bonds” as they invested $151.5bn in these instruments from February to May, according to the Wall Street Journal. 200 Chinese companies collectively raised $74bn through the issue of more than 700 bonds. Pfizer and Bank of America raised $1.25bn and $1bn respectively through pandemic bonds recently. These bonds are distinct in that the proceeds are to be used towards pandemic relief initiatives. However, the lack of standards make the definition of coronavirus bonds ambiguous. The lack of transparency of these bonds seems to be eclipsed by the high returns provided by them. As per an IMD research article, these bonds price a risk highly uncorrelated with the traditional sources of financial risks and therefore offer a relatively cheap way to diversify a portfolio, creating value for investors.

The largest movie theatre chain in the US and Europe, AMC Entertainment has been hit hard by the ongoing pandemic due to the closure of the movie theatres. The chain with about 1,000 theatres and 11,000 screens across the globe seeks to swap about $2.3 billion of subordinated debt with $1.2 billion of new second-lien secured debt as reported by Bloomberg. The company has been trying to lower its debt liability and has offered investors a swap with a 50% haircut on the face value of the existing debt. Investors will take a call on this offer on Jun 16. The company had earlier resorted to a $500 million debt issue in April to improve its liquidity. The debt along with the new deal with investors has the potential to reduce the debt burden of the company from $5.3 billion in March end to $4.7 billion. However, this move has been viewed as a distress measure by S&P and it considers that AMC failed to provide promised returns to its investors which was “tantamount to default”. As a result, S&P lowered the rating of AMC to CC. Moody’s had lowered the company’s long term rating to Caa1 from B3.

Bombardiers bonds rallied as it confirmed the sale of its coveted Canadair Regional Jet (CRJ) series aircraft to Mitsubishi Heavy Industries for approximately $550 million. With this deal, the company has exited the commercial aviation business and now solely caters to private jets. Bombardier has been reeling under debt of more than $9bn, and this deal is part of a string of sales that aim to increase the company’s liquidity. In February, the company had sold a stake to Airbus and last year, it sold its Q400 turboprop business to Longview Aviation Capital. It is also in talks to sell its aerostructures business to Spirit Aerosystems. Mitsubishi aims to capitalise on the aftermarket sales and maintenance. It could also leverage a potential increase in the sales of business jets due to lowering demand of commercial aviation as an aftermath of the pandemic. The dollar bonds of the company saw an upward rally on Jun 4, after having witnessed an overall downtrend since the last one month. 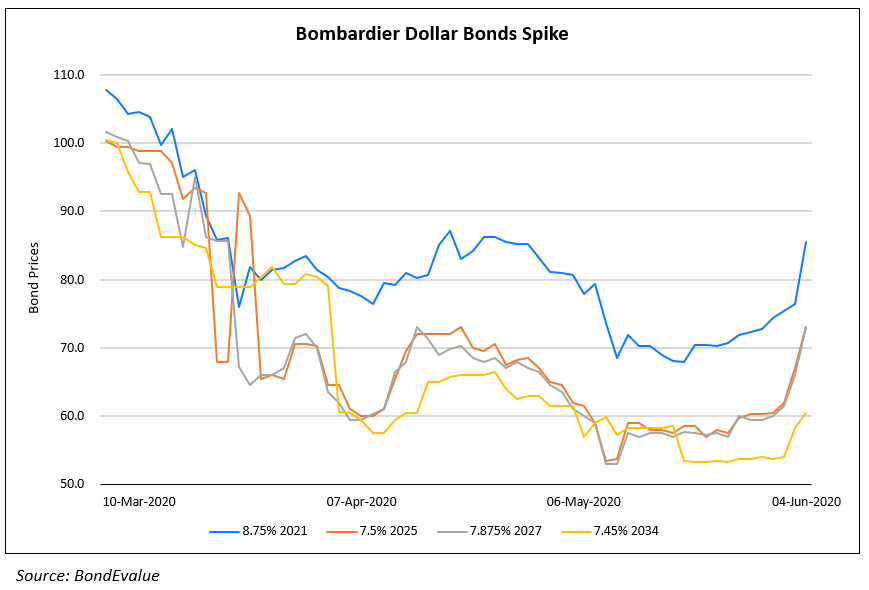 We have been witnessing a yield curve steepening in the US over the past few days as the 30Y Treasury yield has been rising at a faster pace compared to short term Treasury yields.

“Like the liberalization of the Non-deliverable Forwards (NDF) markets yesterday, perhaps measures could be introduced to all residents to buy USD bonds subject to a limit,” he said. Top-rated sovereign-backed Indian companies like SBI, NTPC, Indian Railways Finance Corp. faced a drop in bond prices by 0.10-0.60% a day after rating company Moody’s cut India’s sovereign rating to a rank above the high-yield category. “The market has shrugged of the downgrade as it was expected.”

On the future ahead with low bond yields – Patrik Schowitz, global strategist at JPMorgan Asset in Hong Kong

Low yields from government bonds might mean that investors need alternatives to safe havens to hedge their portfolios. “We’re overweight cash,” Schowitz said. For investors using bonds to hedge equity portfolios, “there’s not much to like any more,” he said. Schowitz expects a slight rise in bond yields, and recommends investors to move into assets geared toward economic recovery in the months ahead. 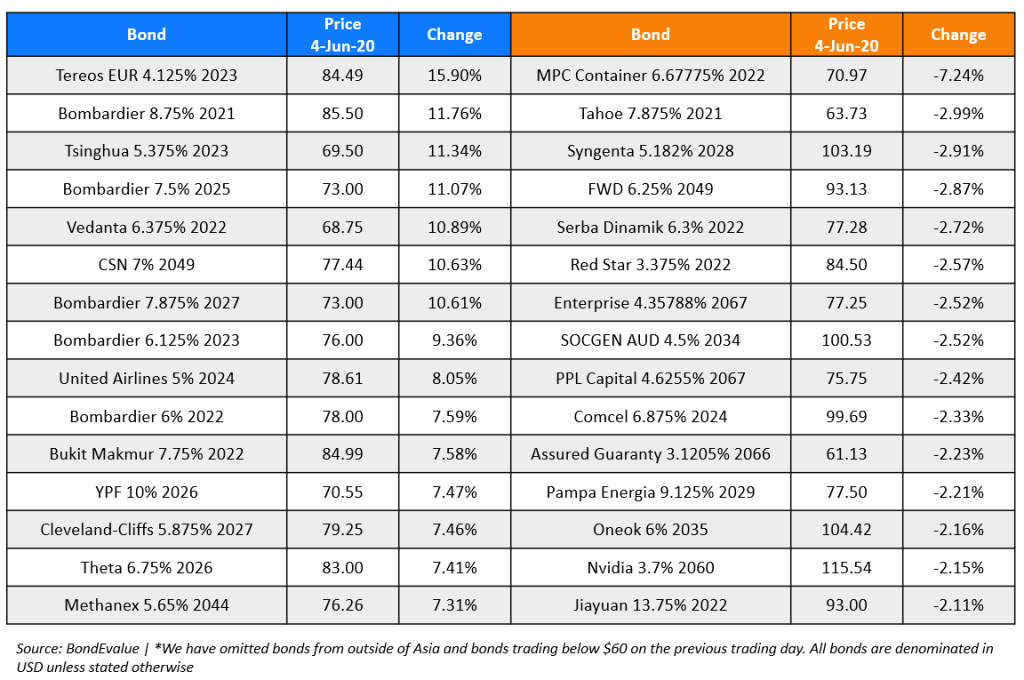