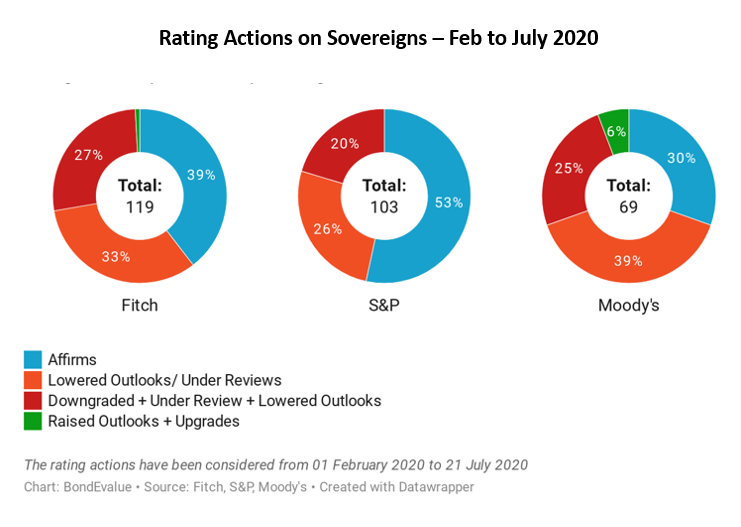 The worst pandemic seen in recent history has resulted in over 14.76 million confirmed Covid-19 cases including 612,054 deaths as of 6:18 PM CEST, July 22, 2020 as per the WHO. This has seen central banks acting rapidly and decisively in slashing interest rates and creating stimulus packages. The rating agencies have on their part sounded alarms by cutting credit ratings of countries and corporations at a rapid pace.

Credit agencies determine the credit worthiness of sovereigns through rating actions assigned on a scale from AAA to D with the former reserved for the most secure countries and the latter for those in default. Only 9 countries belong to the elite AAA club whose members have been awarded the highest rating by all three rating agencies. These are Australia, Denmark, Germany, Luxembourg, Netherland, Norway, Singapore, Sweden and Switzerland. On the other end of the spectrum lie the countries rated D that are highly levered and in default. While Puerto Rico, Venezuela and Grenada were in the default category even before the crisis, they were joined by three new countries in the defaulters’ club during the COVID-19 crisis. Lebanon defaulted for the first time in March this year. It was following by the default of Latin American duo Argentina and Ecuador in May and June respectively. There are other countries that are hanging by a thread before being placed in default by all three agencies. Suriname is one such example, which has been downgraded by multiple notches by all three agencies on its mounting debt. It is currently placed in the default category by S&P and Fitch while Moody’s has downgraded it to Caa3, which is just few notches above default.

We have summarized the credit ratings of each country as on July 21, 2020 in the world map below. You can see the ratings for each country by hovering over it.

When interpreting credit ratings, the real question here is whether ratings are a measure of absolute or relative value. If it is the latter, then downgrading almost every Emerging Market country in the world was quite pointless. Maybe Mrs. Sitharaman has a point. All three agencies are headquartered in the USA and have been under criticism after every crisis from the GFC in 2008 for giving ratings that were too good to be true to the Greek and Portugal crisis for being too aggressive and exacerbating the sovereign crisis.[1] This time one hopes that the agencies have not erred on the other side and reacted too quickly. The bonds markets on their part have shrugged of the downgrades and most Sovereign bonds are doing just fine.

For the purpose of this editorial, 291 rating actions on 158 countries between 01 February 2020 and 21 July 2020 have been considered to analyse the impact of the pandemic on credit ratings. Of the 291 rating actions on sovereigns, a massive 163 (56%) were either downgrades or lowering of outlooks. This was followed by 123 (42%) rating affirmations and just 5 (2%) upgrades/improving outlooks.

Impact of the Pandemic

Looking at the rating actions taken since the pandemic broke out, it is clear that high yield or junk rated countries have been hit harder, pushing them deeper into junk territory. That being said, investment grade rated sovereigns have not been spared either. Countries such as Canada, Australia, Italy and France have either been downgraded or have been subject to a downward revision of outlook. Most notable was Canada, which lost its coveted AAA rating after Fitch downgraded it from AAA to AA+ on June 24. To better understand the impact of the pandemic on credit ratings, we have quantified1 the rating actions taken between February and July 22, 2020 and plotted them on the world map below. The countries that witnessed adverse rating actions are highlighted in shades of orange – the worse the rating action, the darker the colour. Similarly, the countries that witnessed status quo or positive rating actions are highlighted in shades of blue – more positive the rating action, darker the colour.

1A score was allocated to each of the country on which a rating action was initiated. The score was based on the weights in which a downgrade was worth -1.0, a outlook change worth -0.5, a rating under review for downgrade worth -0.25, affirmed actions worth 0, raised outlook changes worth +0.5 and upgrades worth 1.0. Thus, India which received an revised lower outlook from Fitch and a downgrade from Moody’s got a total weight of -1.5, Argentina with a 3 notch downgrade and a upgrade from Fitch and single notch downgrades from S&P and Moody’s received a score of -4 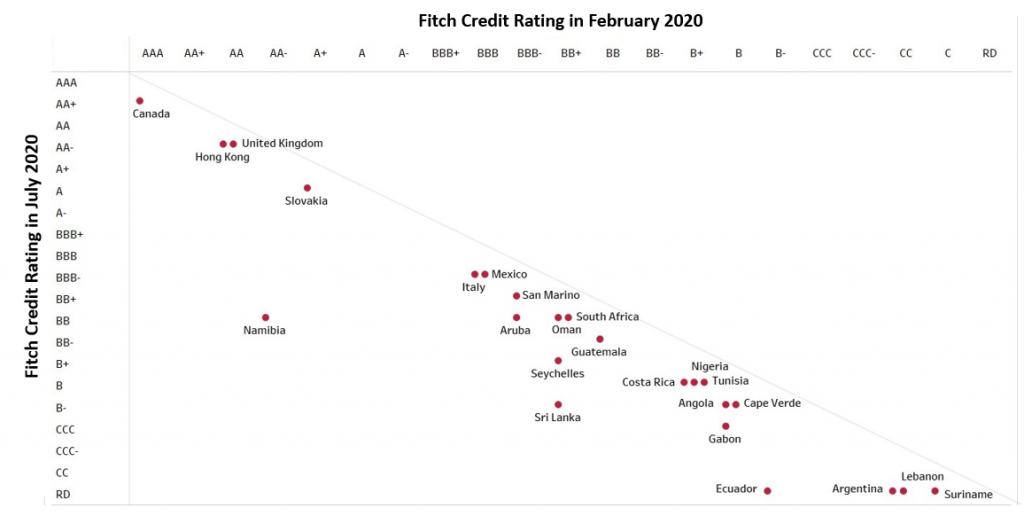 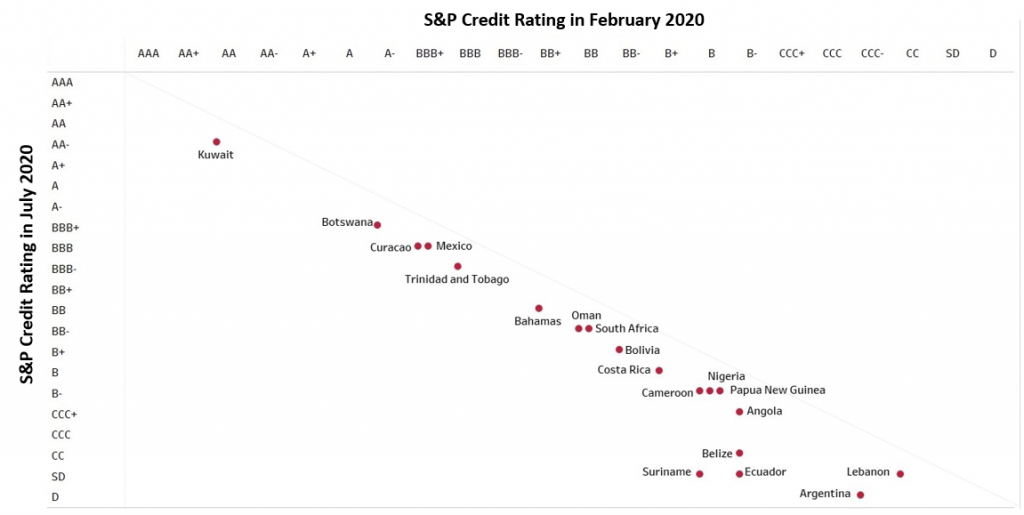 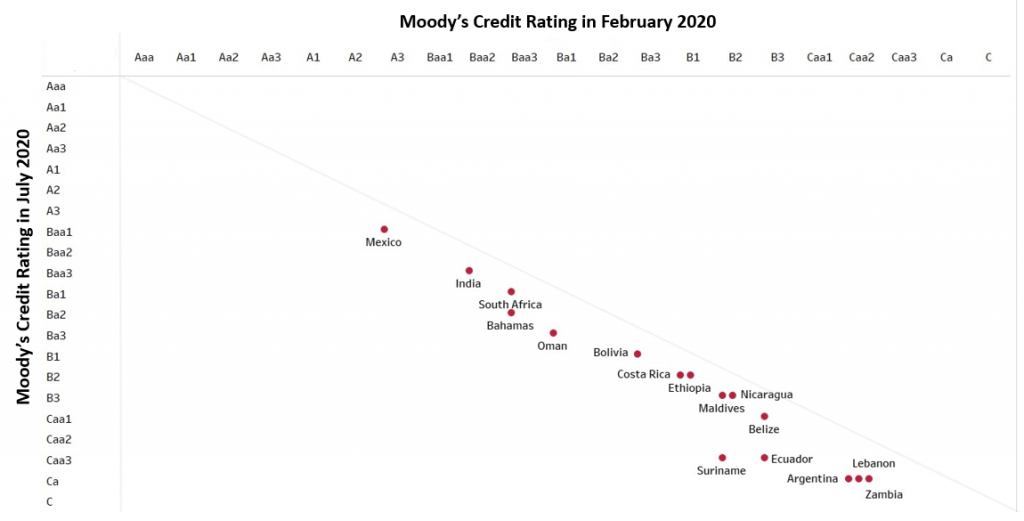 About six months have passed since the pandemic broke out with no end in sight. It will be interesting to see how the rating agencies act between now and the next G20 summit in Italy next year (dates not announced yet). Will we see an early development of the vaccine leading to a rapid economic recovery with subsequent sovereign upgrades? Or will a delay in vaccine development force economies to continue their debt binge, leading to further downgrades and even defaults? Only time will tell. Watch this space. 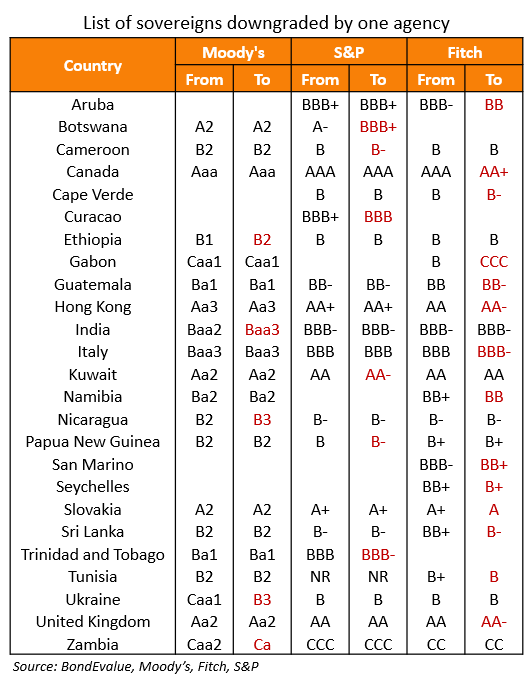