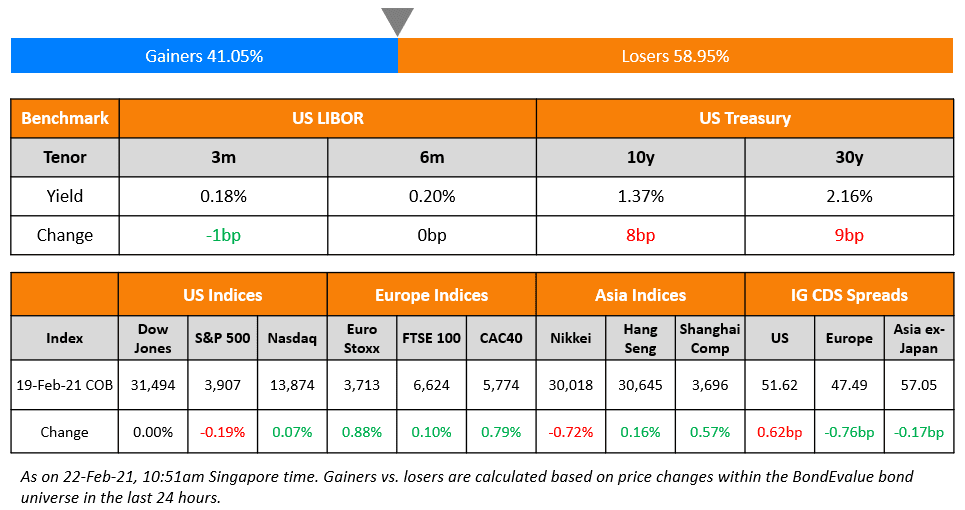 S&P and Nasdaq ended almost flat on Friday after a slight positive start at the open. European indices were higher ~0.8% with FTSE underperforming. US 10Y Treasury and Bund yields climbed further by 8bp and 4bp 1.37% and -0.30% respectively. The US 2s10s curve has steepened ~31bp since end-January led by the sell-off in long-dated bonds. Eurozone’s preliminary PMI numbers came in at 57.7, a three year high as sentiment was upbeat. US IG CDS spreads were 0.6bp wider and HY was 2.8bp wider. EU main CDS spreads tightened 0.8bp and crossover spreads tightened 3.2bp. Asian issuers have slowly returned to the primaries with China Aoyuan and REC launching new deals this morning. Asian equity markets have opened ~0.7% higher while Asia ex-Japan CDS spreads are 0.2bp tighter.

New to the BEV App? BondEvalue will be conducting a complimentary session on Navigating The Bond Markets by Leveraging the BEV App this Wednesday, February 24. This session is aimed at helping bond investors in tracking their investments using the BondEvalue App. 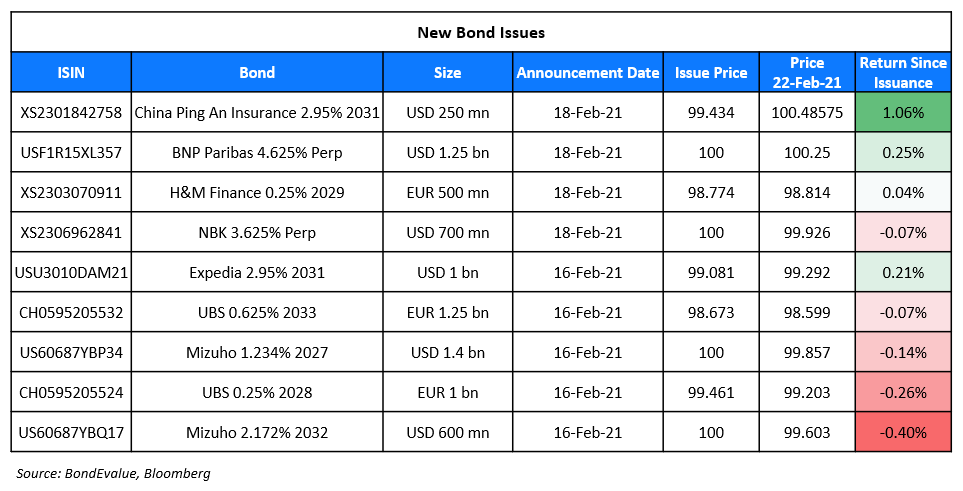 French banking major BNP Paribas raised $1.25bn via a Perpetual non-call 10Y (PerpNC10) bond priced last Friday at a yield of 4.625%, a strong 50bp inside initial guidance of 5.125% area. The AT1 bonds have expected ratings of Ba1/BBB-/BBB. The new AT1s were priced in line with its existing curve, given that its older 4.5% perp issued last February and callable in 2030 is currently trading at 99.4 yielding 4.58% currently. 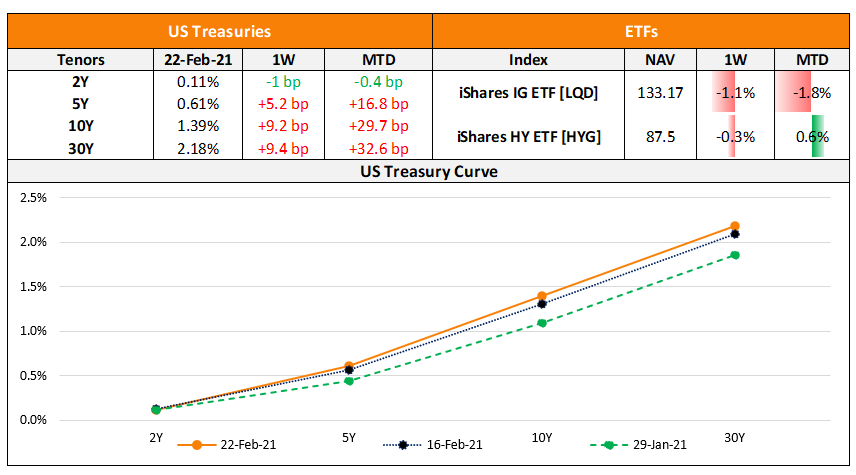 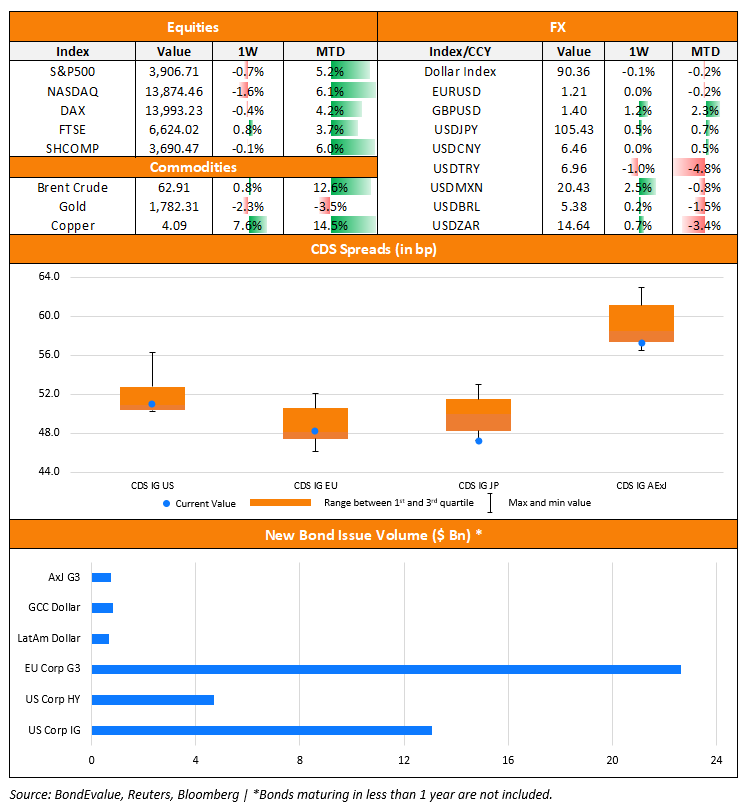 A moratorium is a temporary suspension on debt wherein the borrower does not have to make any repayments. It is a waiting period with some protections for the borrower before repayments begin. However, the interest is accumulated until the end of the moratorium period and the accrued interest is then added to the principal amount of the debt. Indonesian property developer Modernland applied to extend a debt moratorium, discussing a possible restructuring of its USD bonds following a default last year. A moratorium is due to expire on February 28, but the company has requested an extension to May 31. Modernland has two dollar bonds: a US$150m 10.75% August 30 2021 bond issued through JGC Ventures and a US$240m 6.95% bond due March 13, 2024.

“Before the pandemic, the 10-year yield was trading at about 1.6%, and if we are going to get back to what the economic situation was — give or take — back then, then there’s no reason why yields should be lower than that,” said Stanley.

“The reflation trade is going to stay,” said McReynolds. “We’ll of course continue to see volatility around inflation expectations and actual inflation prints themselves. But you have to take the Fed completely at their word, that they are going to be behind the curve” in tightening policy even as the economy and inflation pick up.

“On the individual side, the business side and the industrial side, the data continues to be strong,” Martin said.

In a research note by strategists at ING
“Should Treasury yields continue to rise too fast, it will bring everything else down with it,” strategists at ING wrote. “From here, slow and steady extends the party in [the] risk asset space . . . while fast and furious ends it.”

On the concern that rising borrowing costs and price pressures could derail the economic recovery – Shawn Snyder, head of investment strategy at Citi Personal Wealth Management

“The two big things right now are waiting for stimulus and this idea of the reflation trade — investors have a keen eye out for signs of inflation,” said Snyder. “You see Treasury yields moving higher, that’s causing a bit of consternation in the markets.”

“Investors are more keen to protect against a rise in rates than a fall, suggesting there is more pain,” said Meijer. Dealers taking the other side of these trades “could lead to an amplified move,” he added.

In a note by Adam Kurpiel and his team, Societe Generale SA strategists

“This is consistent with the acceleration in the yield sell-off and increasing rates volatility,” they wrote.

On the dangers of today’s low-yielding, high-yield market – Matt Eagan, a portfolio manager at Loomis Sayles

“It’s now the high-yield bond market in name only,” said Eagan. “I don’t like the fact yields are really low but that’s the environment we are working in.” On low spreads resulting in little room to absorb losses, “that’s the big risk,” said Eagan. “There is a leap of faith and you have to make a call as an investor. Our view is the economy is going to come back pretty solidly.”

On the dark side for Emerging Markets caused by reflation euphoria

“If a particular allocation across the risky markets spectrum should be low confidence this year, it is the EM overweight,” Normand wrote.

In a note by Kamakshya Trivedi and team, Goldman Sachs strategists

“A sharp move higher in U.S. rates can drive sharp selloffs among highly-positioned high-yielding EM currencies on a tactical horizon,” the strategists wrote. These “moves can retrace once the pace of the rate move moderates,” they added.

“We remain positive on Asian currencies, and see the positive growth outlook for the region outweighing the move in yield,” he said.

Michael Pettis, finance professor at Peking University
“This will raise financing costs for consumers and will cripple one of the fastest-growing business segments for Ant, almost certainly forcing a steep drop in its eventual valuation,” said Pettis.

Bruce Pang, head of macro and strategy research at China Renaissance Securities
“Online lending platforms could face more valuation pressure with dampened growth prospects, considering that they would have to raise more capital to fund [themselves] in joint loans with banks,” Pang said. 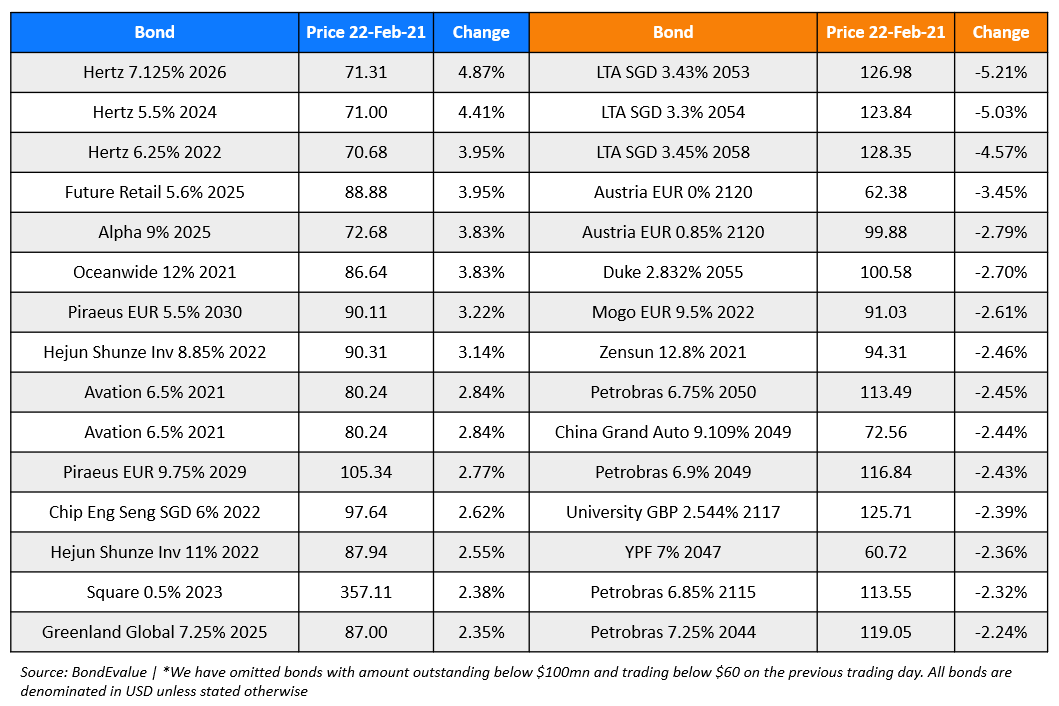