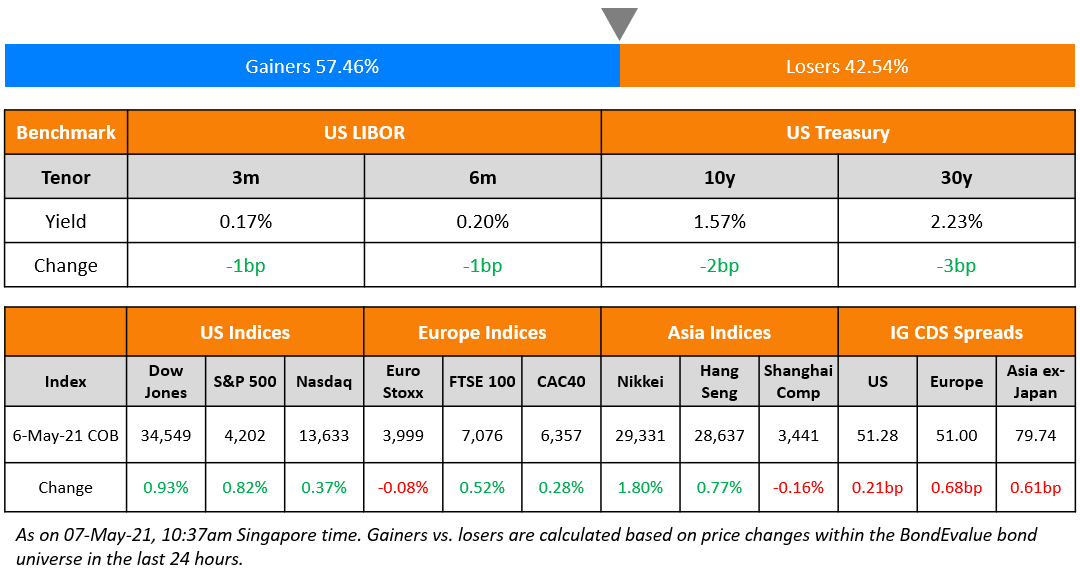 S&P was up 0.8% and Nasdaq was higher by 0.4% as both indices staged a late rally. US jobless claims for the prior week fell 92k to 498k, the first sub 500k print since the pandemic broke-out. Markets now await the non-farm payrolls (NFP) data today with expectations of a 978k rise. US 10Y Treasury yields were 1bp lower to 1.57%. US IG CDS spreads were 0.2bp wider and HY widened 0.4bp.  EU main CDS spreads were 0.7bp wider and crossover spreads widened 2.6bp. Asian equity markets are off to a positive start, up ~0.5% while Asia ex-Japan CDS spreads were 0.6bp wider. 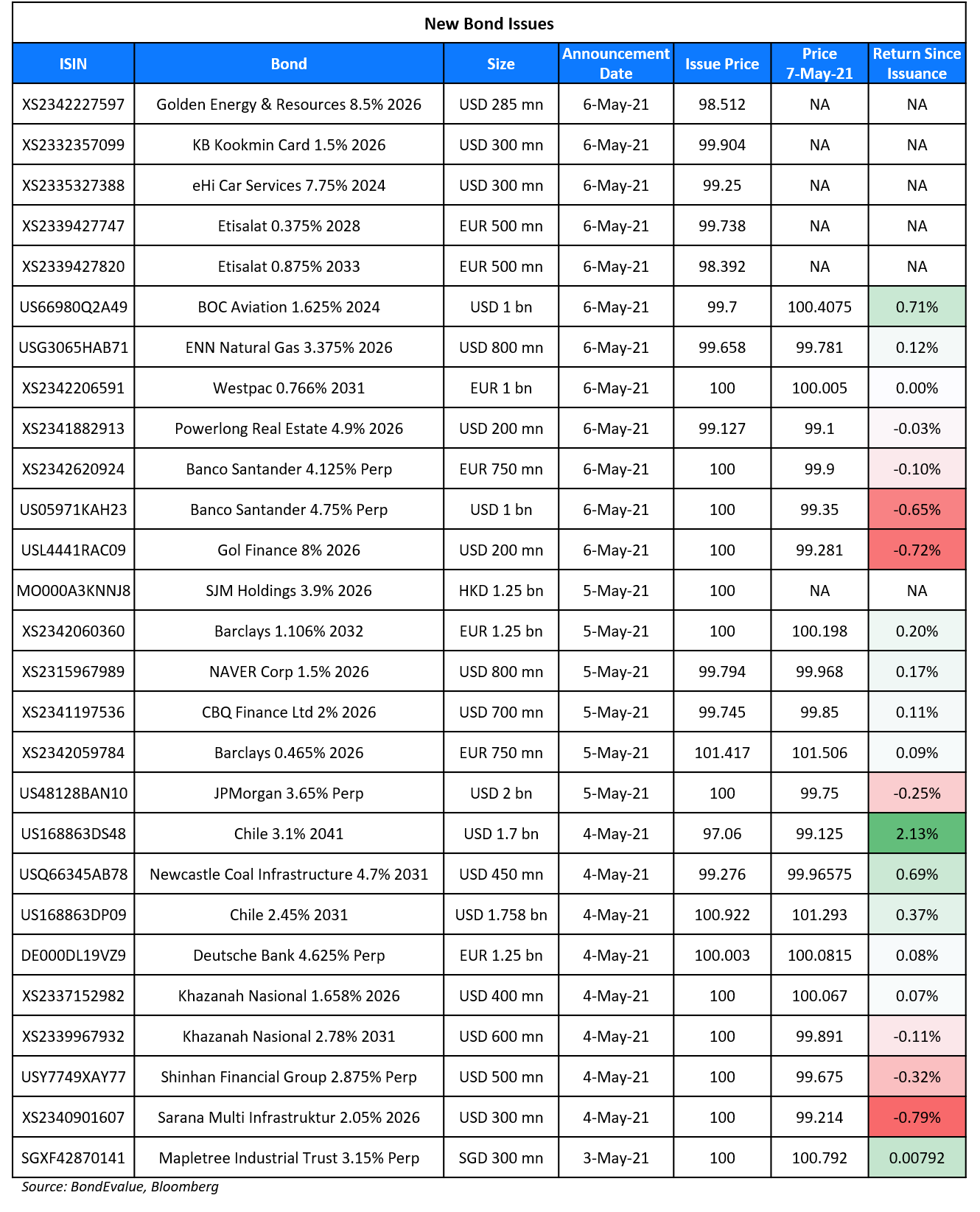 Powerlong Real Estate raised $200mn via a 5NC3 bond at a yield of 5.1%, 60bp inside initial guidance of 5.7% area. The bonds have expected ratings of B2/B+, and received orders over $3.75bn, 19x issue size. Asia took 87% and EMEA 13%. Asset/fund managers bought 85%, private banks 9%, sovereign wealth funds 3%, and private banks and corporates 3%. The issue size is equal to the property developer’s remaining unused offshore debt quota as per IFR. Proceeds will be used for offshore debt refinancing.

BOC Aviation raised $250mn via a tap of their 1.625% 2024s at a yield of 1.556%, 30bp inside initial guidance of T+155bp area. The bonds have expected ratings of A-/A-, and received orders over $900mn, 3.6x issue size. IFR said, “US investors were allocated 74% of the bonds, an extremely high proportion for an Asian issuer, while Asia investors took 18% and EMEA 8%.” Fund/asset managers and insurance received a combined 87%, sovereigns, supranationals and agencies 7%, bank treasury 5%, and private banks and others 1%. The Chinese aircraft leasing firm plans to use proceeds for new capital expenditure, general corporate purposes and/or the refinancing of its borrowings.

ENN Natural Gas raised $800mn via a 5NC3 bond at a yield of 3.45%, 55bp inside initial guidance of T+320bp area. The bonds have expected ratings of Ba1/BBB-, and received orders over $3bn, 2.7x issue size. Proceeds will be used for debt repayment.

Golden Energy and Resources raised $285mn via a 5NC3 bond at a yield of 8.875%, 12.5bp inside initial guidance of at 9% area. The bonds have expected ratings of B1/B+, and received orders over $360mn, 1.3x issue size. Asia took 88% of the deal and the rest went to EMEA. Asset managers and fund managers bought 55%, private banks 43% and banks 2%. Proceeds will be used to redeem all of the outstanding 2023 notes and repay all amounts outstanding under the Credit Suisse/Mandiri facility, together with any applicable premium as well as accrued and unpaid interest.

KB Kookmin Card raised $300mn via a 5Y sustainability bond at a yield of 1.545%, 35bp inside initial guidance of T+110 area. The bonds have expected ratings of A2, and received orders over $1.6bn, 5.3x issue size. Proceeds will be allocated to eligible green and social projects in accordance with KB Kookmin Card’s green, social and sustainability financing framework.

Mid-Swaps are essentially the mid-rate or the average of the bid-ask rates on a swap corresponding to the maturity of the bond. Whilst bonds are generally priced as a spread over Treasuries, some issuers price them over the Mid-Swaps rate. Many euro denominated bonds are priced as a spread over the Mid-Swaps rate. The ‘swap rate’ is essentially the fixed-rate that the receiver gets in exchange for paying the floating rate in a Swap contract with the Mid-Swaps being the average of the bid-ask swap rates. Westpac yesterday raised €1bn ($1.21bn) via a Tier 2 bond at Mid-Swaps + 105bp.

“The Archegos event illustrates the limited visibility into hedge fund exposures and serves as a reminder that available measures of hedge fund leverage may not be capturing important risks,” said Brainard. “The potential for material distress at hedge funds to affect broader financial conditions underscores the importance of more granular, higher-frequency disclosures.”
On investors preparing for taper tantrum strategy as Fed demurs on timing
Pilar Gomez-Bravo, investment officer and director of fixed income at MFS Investment Management
“The biggest threat to the market is rates volatility jumping higher, like we saw at the end of February.” “The valuations of risky assets are high, so you don’t have a lot of room for complacency.”
Ben Powell, chief Asia Pacific investment strategist for the BlackRock Investment Institute
“We still think yields can move somewhat higher but tactically we think the big repricing of the activity restart is now mostly done,” said Powell.
Win Thin, Brown Brothers Harriman & Co.’s global head of currency strategy
“Suffice to say that Chair Powell will take great pains not to surprise the markets with a decision to taper,” Thin wrote. “Rather, it will be well-telegraphed and the minutes are the first place markets should look.”
On US yields falling before non-farm payrolls report – Steve Feiss, managing director, fixed income, at broker-dealer Etico Partners
“I’d say positions are being squared or shorts covered, which is counter to the bearish narrative,” said Feiss. “Inflation remains a near-term risk but so far, the word ‘transitory’ remains a key hope and a single 1 million jobs non-farm payrolls print is only just beginning,” he added.
On the Bank of England slowing bond buying as UK economic recovery gathers pace
Rishi Sunak, Chancellor of the Exchequer
“The success of the government’s vaccine program means the nations of the U.K. can now begin to chart a safe clear course out of lockdown, and the government’s unprecedented economic response continues to support our ongoing economic recovery,” Sunak said.
Andy Haldane, Bank of England Chief Economist
“There was now clear evidence that the economy was growing rapidly, with both household and company spending surprising significantly and persistently to the upside, and consumer and business confidence bouncing back,” he argued.
In a statement by the Bank of England
“GDP is expected to recover strongly to pre-Covid levels over the remainder of this year in the absence of most restrictions on domestic economic activity,” the BOE said. “Demand growth is further boosted by a decline in health risks and a fall in uncertainty, as well as announced fiscal and monetary stimulus.”
Vivek Paul, the U.K. chief investment strategist at BlackRock Investment Institute
“It would be a mistake to extrapolate from eye-watering growth rates in
the near term to stronger growth in the future,” he said. “After all, this is a restart, not a recovery.”
On Colombia’s fear of junk misguided based on fallen-angel history
Juan David Ballen, director of research and strategy at Casa de Bolsa
“What matters right now is stabilizing the economy and employment, strengthening institutions, before we think about maintaining investment grade,” he said.
Jose Manuel Restrepo, Colombia Finance Minister
“For us, investment grade is closely linked to the country’s commitment to fiscal stability,” Restrepo said. “Colombia is aware that it must necessarily guarantee the stability of its public finances and its stability from a social perspective.”
Alvaro Mollica, a macro strategist at Citibank
“After that first downgrade, there tends to be stabilization on the rates side, which provides a better entry point and opportunities,” said Mollica.
Jonathan Davis, a money manager for emerging market debt at PineBridge Investments LLC
“One of Colombia’s long-standing strengths from a credit profile has been consistent center-right, conservative economic regime relative to peers in the region,” said Davis.
On El Salvador not in talks with China over loan deal – Alejandro Zelaya, El Salvador Finance Minister
“It hasn’t had an impact. I’ve talked with multilateral organizations,” said Zelaya. “I also spoke with the International Monetary Fund on Monday. The talks are still ongoing,” Zelaya said. “We don’t see a scenario in which the agreement with the IMF fails, not at all.” 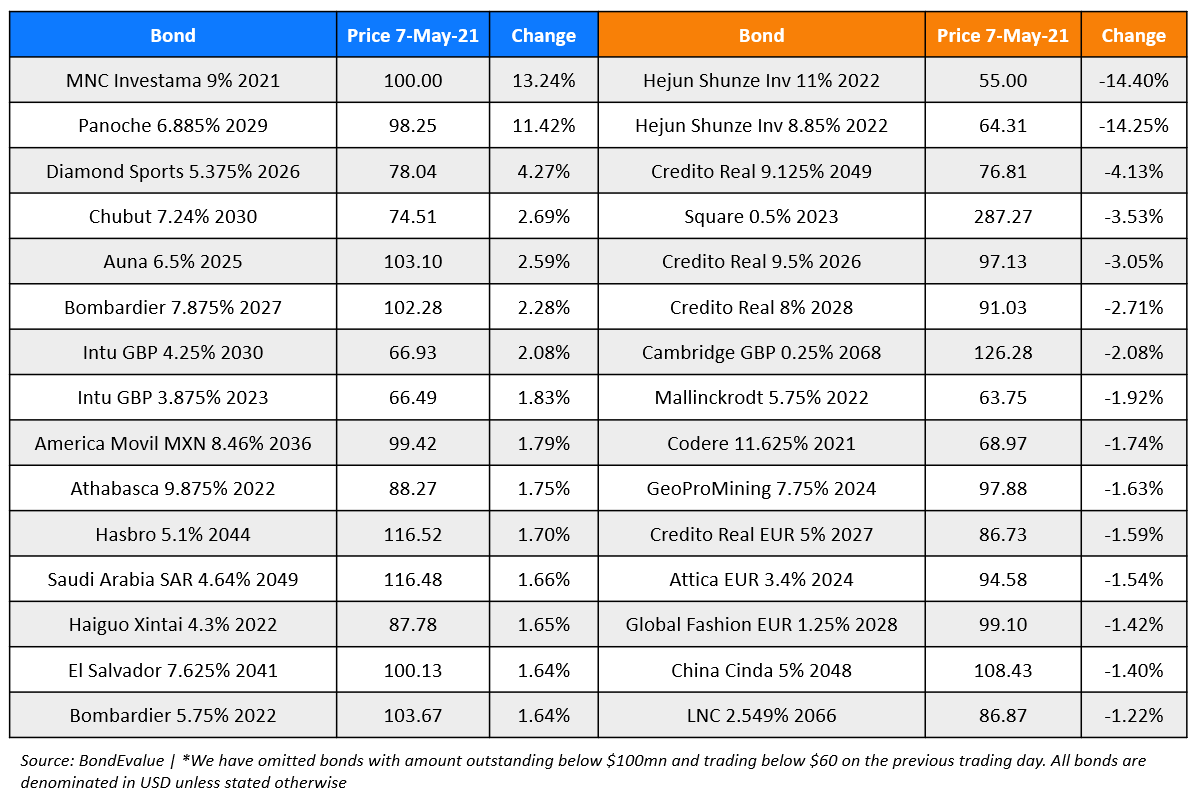