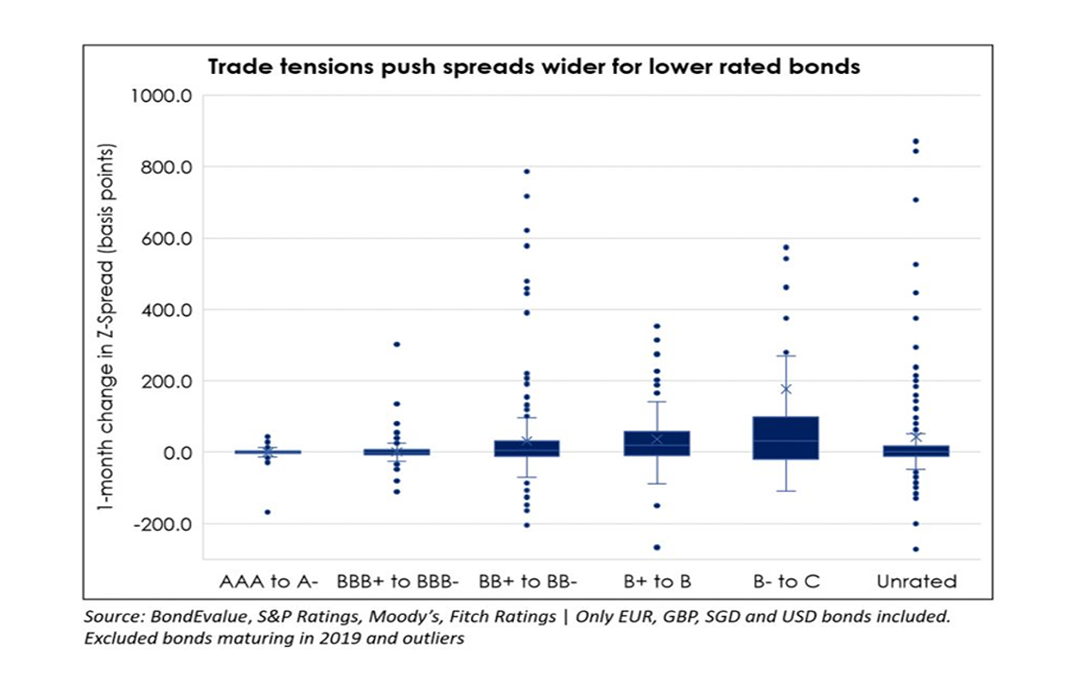 Renewed trade tensions coupled with neutral commentary from the Fed Chair, after the FOMC cut interest rates by 25 basis points, triggered a move towards safer assets globally in the early days of August.

US President Trump imposed tariffs on an additional US$ 300 billion worth of goods. China is said to have retaliated by allowing the Renminbi to slide below 7 against the US dollar for the first time in 11 years. This spooked the bond markets as benchmark yields dropped across the board. The 10-year US Treasury dropped 31 basis points from 2.02% on 31st July to 1.71% on 6th August. The entire German yield curve fell into negative territory with the 30-year dropping below zero for the first time ever. The Dutch 30-year and Irish 10-year also fell below zero for the first time.

Falling yields drove 65% of bonds in the BEV universe to deliver a positive price return (ex-coupon) in July. Similar to the trend described in last month’s newsletter, July saw investor preference towards sovereigns and state-owned corporates. However, lower-rated bonds witnessed a widening in credit spreads as can be seen in the boxplot above.

Typical to a risk-off environment, lower-rated bonds (BB+ and lower) witnessed a widening in spreads, which implies an increase in yields and hence a fall in bond prices. Spreads also widened for investment grade bonds, as measured by the iTraxx Asia ex-Japan 5-year IG CDS index, which spiked ~13 basis points from 57.5 on 31st July to 70.4 on 6th August.

The 3-month US Treasury bill has now been offering a higher yield to investors vs. the 10-year Treasury bond for over two months now. This has been a flashing warning sign in the past, given that it has preceded past recessions and is thus a cause of concern for investors. In the graph below, we have plotted the 3-month yield vs. the 10-year yield since 1991. 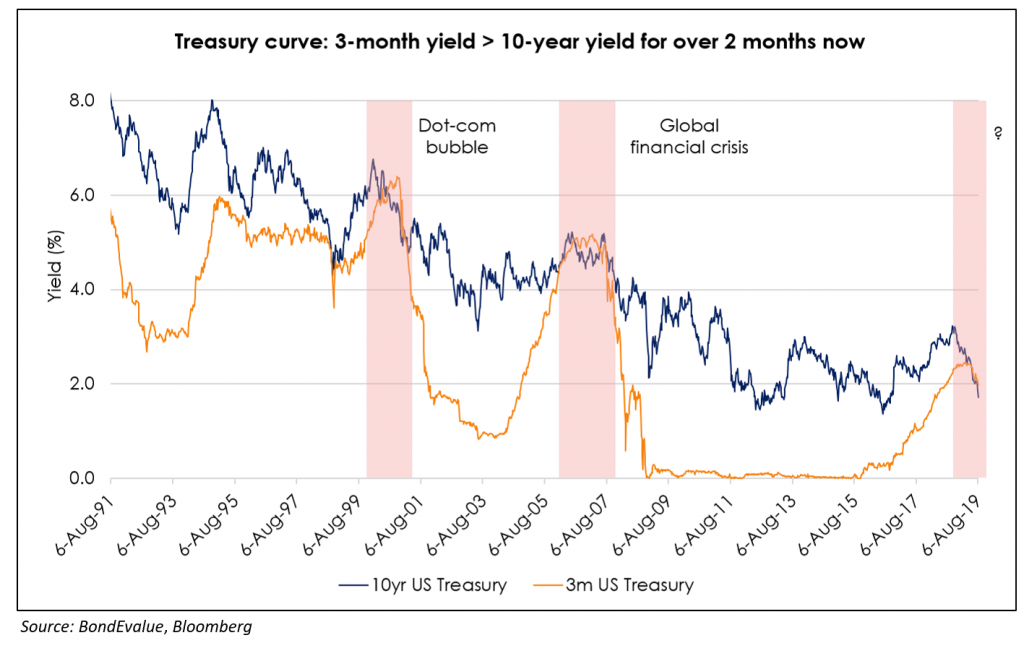 As can be seen, the Treasury curve inversion (3-month yield > 10-year yield) has preceded the dot com bubble of 1998-2001 and the global financial crisis of 2008-2009. With the recent nosedive in the 10-year yield, recession fears have re-emerged driving investors towards low-risk assets such as government bonds and gold.

Asia ex-Japan new bond issuance volume remained strong in July with total issuance at US$ 35.4 billion, 15% higher than the 1H19 average of US$ 30.9 billion. Issuance was however down 13% compared to June, which saw a 19-month high volume of US$ 40.5 billion. 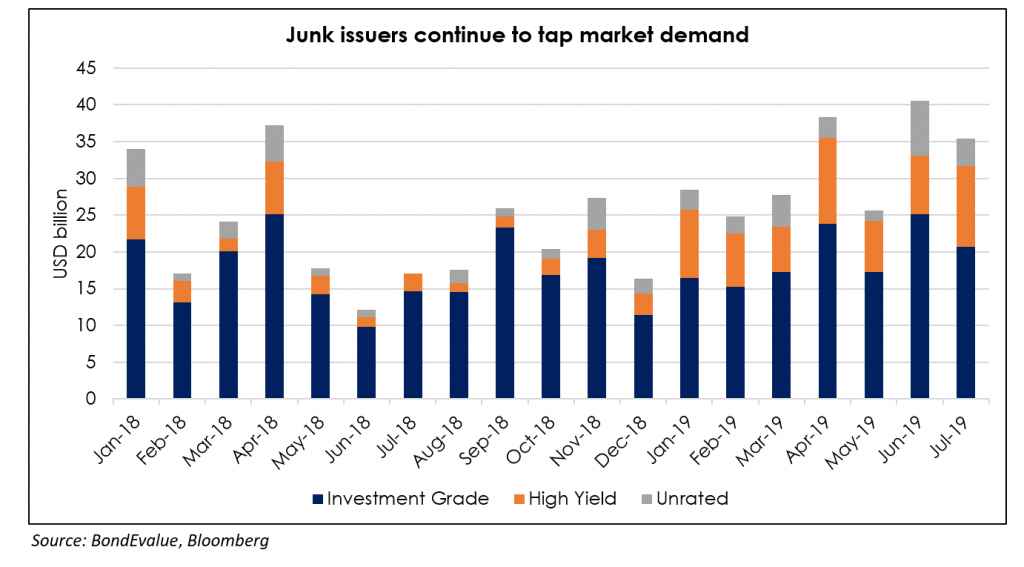 July saw the largest additional Tier 2 deal by an Australian bank with Westpac raising US$ 2.25 billion via a dual-tranche SEC-registered sale. The deal received robust demand with a total order book of US$ 15 billion, which explains the strong performance of the bonds in the secondary market. However, not all oversubscribed bonds perform well on the secondary markets, as was the case with Oman’s US$ 2.25 billion 10-year bond rated Ba1 by Moody’s, which fell over 2 points after listing. 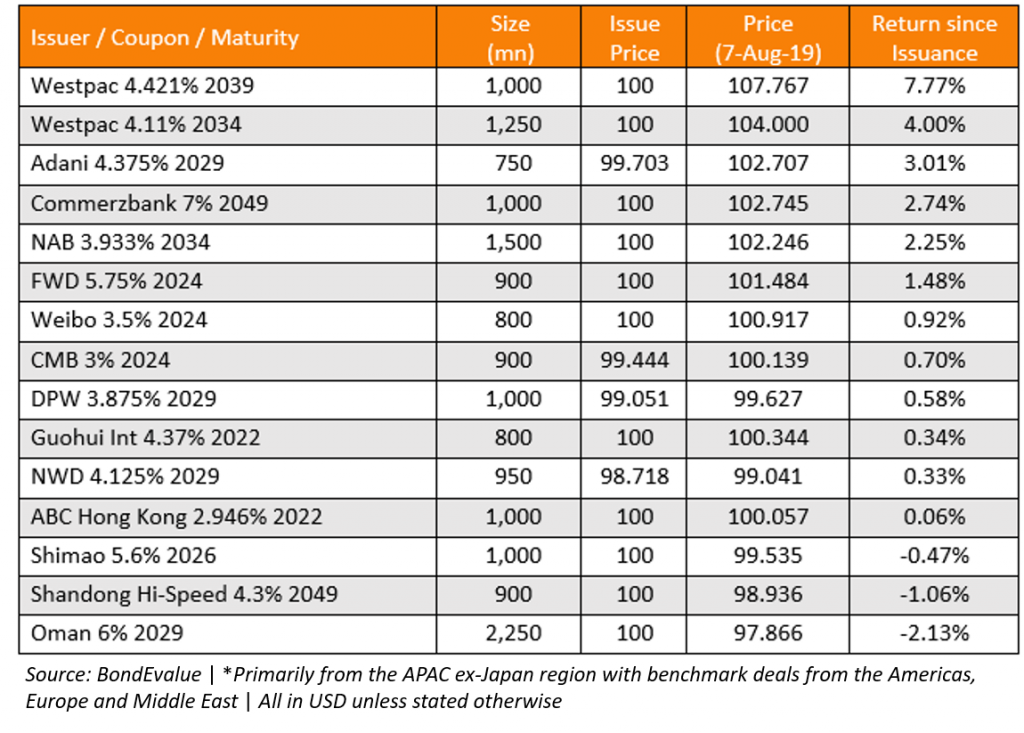 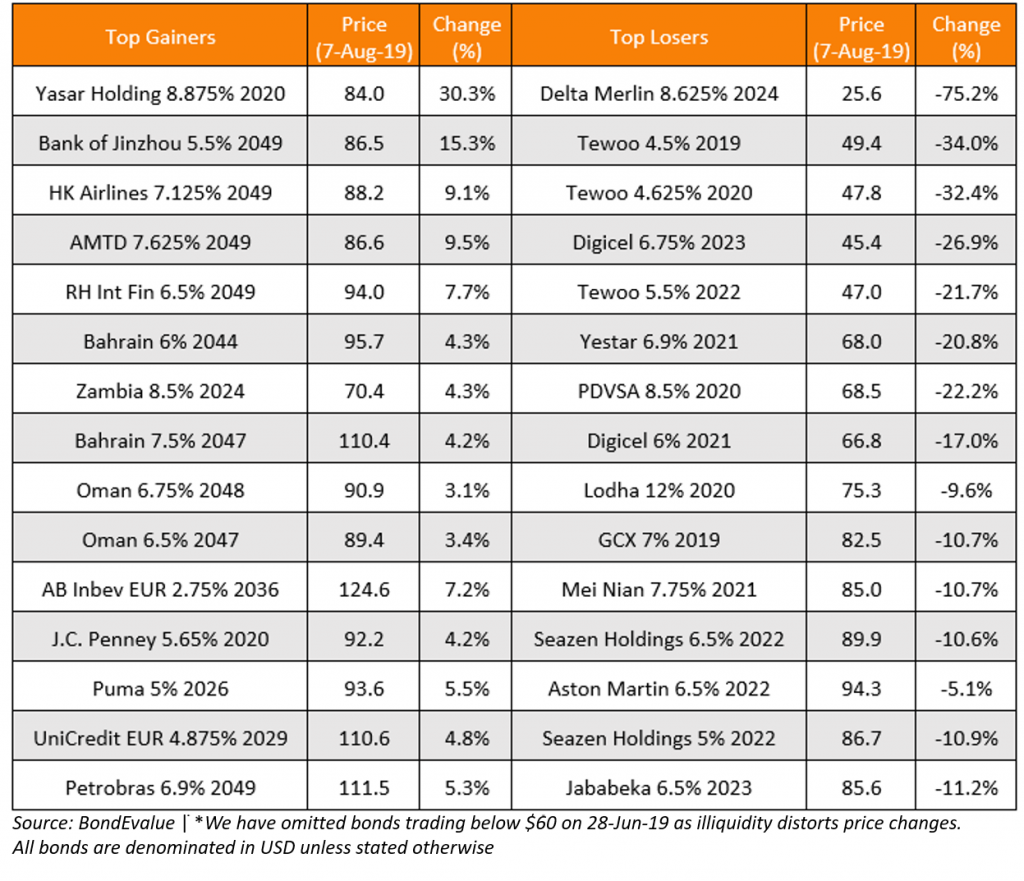 GCX, a unit of Reliance Communications, held back US$ 350 million repayment towards its 7% bonds due on 1st August. The subsea cable operator said that 87% of its bondholders are prepared to wait for a few weeks as provided for by the forbearance agreement while they negotiate refinancing options.