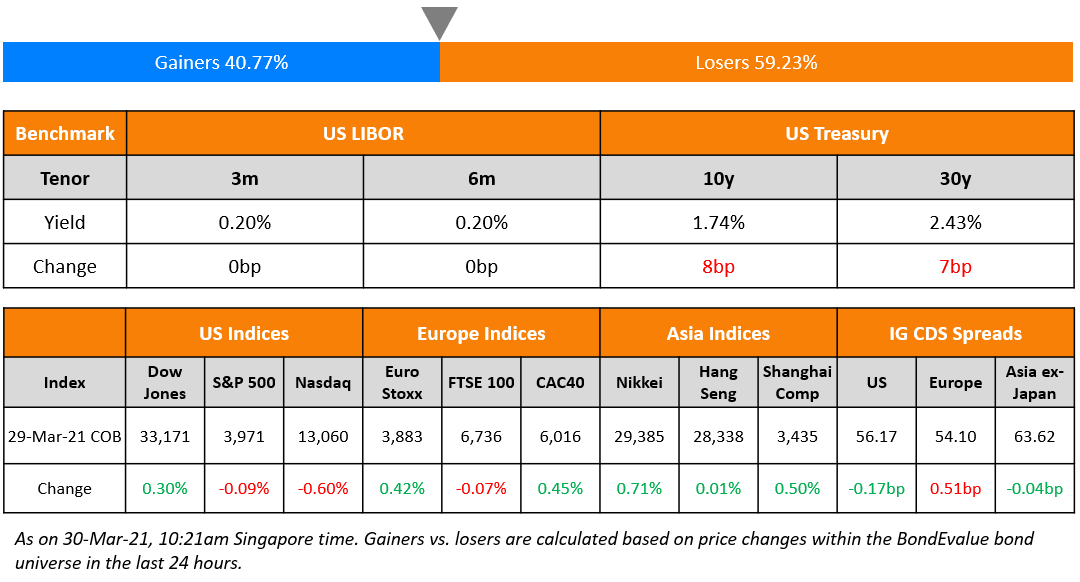 S&P ended just 0.1% lower after falling ~0.8% initially while Nasdaq closed 0.6% lower. The financials sector fell over 1% with banks on the back of the Archegos Capital margin call default, which is expected to see some banks face significant losses. US 10Y Treasury yields climbed higher by 8bp to 1.74%. DAX and CAC gained 0.5% each while FTSE was down 0.1%. US IG CDS spreads were 0.2bp tighter and HY was flat. EU main CDS spreads were 0.5bp wider and crossover spreads widened 0.7bp. Asian equity markets are off to a positive start, up over 1% and Asia ex-Japan CDS spreads were flat. It’s a busy Tuesday at the primary markets with eight new deals today including Resorts World, AIA, Jinmao and Chile. 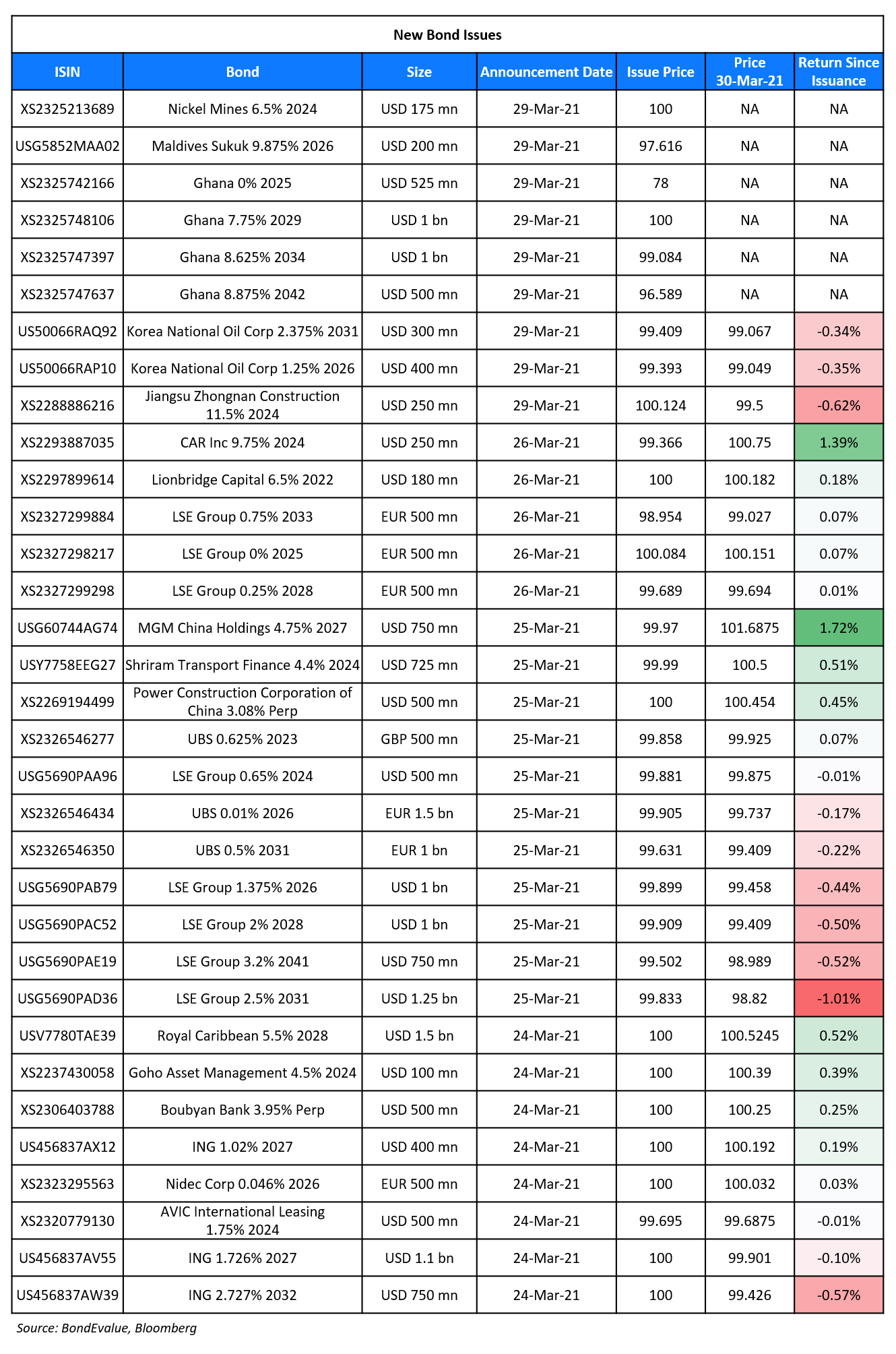 Nickel Mines raised $175mn via a 3Y non-call 2Y (3NC2) bond at a yield of 6.5%, 25bp inside initial guidance 6.75% area. Proceeds will be used along with its cash reserves to fund the $350mn second stage acquisition of an additional 50% equity interest in the Angel Nickel Project, which will take its aggregate equity interest in Angel Nickel up to 80%. The deal was downsized from $300mn on account of increased market volatility.

As the name suggests, these are bonds that do not pay coupons. Given the lack of coupons, the price changes in the bond due to a change in interest rates (duration) can be sharper than coupon-paying bonds. But the lack of coupon means that there are no reinvestment risks and therefore unless a default occurs, the bondholder will get the stated yield at the time of buying. For example, if a 5Y zero coupon bond that has a yield to maturity of 3% is bought, the investor will get a 3% return if held to maturity since he/she doesn’t have to reinvest any cashflows. Whereas, in a 5Y 3% coupon-paying bond that has a yield to maturity of 3%, the investor must be able to reinvest the coupons at 3% consistently over the 5Y period to get a return of 3% – if interest rates fall, he/she would end up with a lower return since the coupons are reinvested at a lower rate. These bonds are generally issued at a discount to par value and get redeemed at par.

“When the Fed has rates at zero and QE is ripping, they are essentially the bartender that is handing out as much booze as possible,” said Boockvar. “Many people get drunk on risk, like the fund on Friday, and they get into an accident.”

Leslie Thompson, managing member of Spectrum Management Group
“What we learned from last year — the combination of the Treasury and the Fed working together in a very swift way — the response was swift and so the expectation on a going-forward basis is that when the markets get in trouble by some event, whether the leverage becomes bigger or more systemic, that the Fed and the Treasury come in together and save the day. That’s not necessarily a good thing, but the precedent has happened in the past so the market tends to blow off some of these events.”

Keith Lerner, chief market strategist at Truist Advisory Services
“Having the Fed with so much monetary stimulus and support makes investors more confident this won’t become systemic, that if conditions become too tight the Fed would step in. That provides some confidence to investors that this isn’t something that will escalate. At this point, I think the Fed being in there, as an investor you want to be on the same side of the Fed. At some point, it’s too much of a good thing and the Fed is going to have to start to tighten policy — but we’re just not there yet.”

Chris Grisanti, chief equity strategist at MAI Capital Management
“There’s a small chance there is an underlying problem that we just don’t know the extent of yet. It’s probably fine if it’s just one fund and we’re near the bottom. The concern is more a systemic problem, which I don’t think is going to happen, but I can’t rule it out,” he said. “It is comforting to know the Fed is standing by to offer liquidity if there is a more significant problem — I would be happier if there were no problems. I’m hoping we don’t need the Fed.”

Keith Buchanan, portfolio manager for Globalt Investments in Atlanta
“The Fed has obviously taken upon itself to widen the scope of its mandate. Because of that, if risk markets in general perceive there is a Fed that is the ultimate backstop across asset classes, that is a precursor for the mispricing of those assets if and when that backstop seems to have been overpriced.”

On bond investors already betting on return to normal life

There is still value in the sectors that suffered last year and we are positioned for their recovery,” said Galestian.

Jones said inflationary pressures will remain the “major story for the coming months” and the bond market was “testing the resolve of the (Federal Reserve).” “I personally wouldn’t be betting against the Fed,” Jones said, agreeing that while there would be higher levels of inflation over the summer as economies re-open, it would “start to drift a little bit lower over the back end of this year.”

“I do not approve a prejudiced approach to MPC decisions in April or the following months, that a rate cut will be delivered immediately,” Kavcioglu said. “In the new period, we will continue to make our decisions with a corporate monetary policy perspective to ensure a permanent fall in inflation. In this respect, we will also monitor the effects of the policy steps taken so far,” Kavcioglu said.

“We strictly adhere to the medium-term inflation target of 5% set jointly with the government, and I am aware of its importance of this for sustainable growth,” he said. “When determining the monetary policy stance, we will continue to take into account the realized and expected inflation as well as global capital flows, real yields in peer countries, and the portfolio preferences of residents.” “The central bank may use reserve-boosting tools under appropriate conditions, with prior and proper communication thereof,” Kavcioglu said. 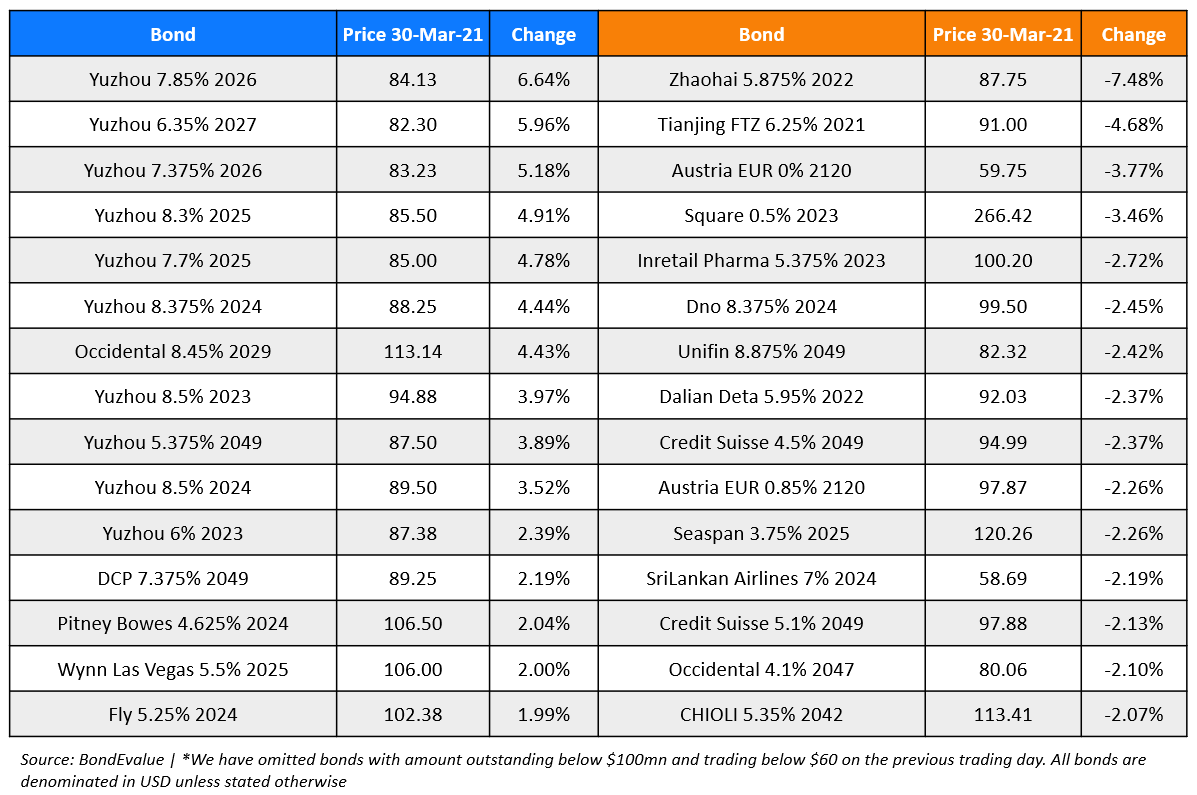