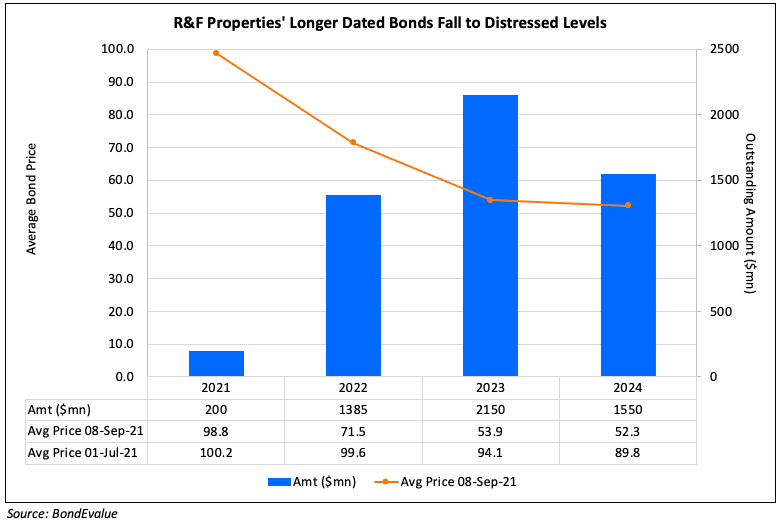 Guangzhou R&F Properties’ dollar bonds extended losses on Tuesday over liquidity concerns. The latest selloff comes after R&F was downgraded deeper into junk to B2 by Moody’s on Monday while being placed on rating watch for further downgrade amid refinancing risks. The fall in its bond prices was so massive that trading on its local currency 6.58% 2022s had to be stopped on Monday after it plunged more than 20% to fresh all-time lows. The sell-off indicates investors’ concerns over the adequacy of the property developer’s cash flows to service its debt and comes at a time when Chinese regulators have imposed restrictions on developers not meeting the ‘Three Red Lines’ metrics, limiting their ability to generate fresh debt. R&F is among the developers that does not meet any of the ‘Three Red Lines’ criteria set by Chinese government. The recent fall in Evergrande’s bonds has only added to investor worries. In fact, thinner margins from property sales and restricted cash flows in China had prompted Moody’s to lower the outlook of the entire property sector in the country to negative.

In the chart below, we have plotted R&F’s upcoming offshore bond maturities against the average prices of its dollar bonds due in 2021, 2022, 2023 and 2024. The developer has: